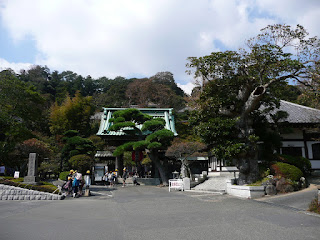 Hirozaku Kore-eda's Our Little Sister is largely set in Kamakura,
a charming coastal city that's home to many temples, shrines and green hills


The same week that I viewed -- and was much affected by -- Isao Takahata's Grave of the Fireflies, I took in a screening of a contemporary Japanese film that also blew me away with its quality.  Among the early scenes in Hirokazu Kore-eda's Our Little Sister are those that take place at a funeral and near the end of the drama, its main characters are shown leaving another funeral service.  In between though, are many happy scenes that gladden the heart -- not least because this far-from-traumatizing movie's characters are endowed with so much humanity and goodwill towards others.


Although that whose Japanese title is Onimachi Diary (with "onimachi" translating into "sea town" and "diary" being written out in English) is over two hours long and has a steady pace that its detractors would label slow, I actually let out a sigh of regret when the movie drew to a close the first time I saw it.  And before I even left the cinema, I had resolved to see this cinematic offering again before the end of its theatrical run -- and ended up going and seeing it again yesterday, less than two weeks after my first viewing of it!


That alone should give a good idea of how much I loved Our Little Sister; and my estimation for it has increased upon discovering that I couldn't detect any flaws in this film after viewing it not once but twice!  In addition, I absolutely adore all four of its main characters: 29-year-old Sachi (Haruka Ayase), her two sisters -- 22-year-old Yoshino (Masami Nagasawa) and 19-year-old Chika (Kaho) -- and the trio's half-sister, 14-year-old Suzu (Suzu Hirose).


Many years ago, their father left Sachi, Yoshino and Chika's mother (Shinobu Otake) for another woman.  Shortly afterwards, their mother also effectively abandoned her children -- who went to stay in a rambling old house in Kamakura with their maternal grandparents.  At the start of the film, the now grownup sisters still live in their grandparents' house, but on their own since those beloved elders have already passed away.  Sachi runs the household like a "dorm mother", Yoshino tells her boyfriend.  But while she occasionally bickers with Sachi, it's clear that Yoshino and Chika are generally pretty satisfied with their living arrangements, as is their eldest sister.


When news comes of their father's death, Sachi, Yoshino and Chika go to the onsen town in Yamagata prefecture where their father had lived and worked most recently, and would be his final resting place.  There they meet their father's third wife (Yoko Asano) and their step-sister from their father's marriage with the second wife, a quiet and polite 14-year-old schoolgirl who's mature beyond her years, who Sachi -- a nurse by profession -- intuitively realized was actually the person (rather than the third wife) who had cared for their father during his dying days.


After spending some time together and bonding (especially after Suzu takes them to her favorite place in the area, a scenic viewpoint where she'd spent quality time with their father), Sachi impulsively invites Sachi to move to Kamakura to stay with her step-sisters.  Yoshino and Chika are initially startled by Sachi's gesture but soon quickly smile their agreement.  And even though Sachi told Suzu she could take her time to decide whether or not she wanted to accept the offer, Sachi quickly agreed to move -- no doubt in part because she felt that she didn't have a place left in her father's third wife's household now that he wasn't there any more.


In the hands of many other filmmakers and writers, a situation in which a young girl goes to live in an old house with her three adult half-sisters could easily turn horrific and horrible.  Heck, even if Our Little Sister had been made 10 years or so ago by Kore-eda (like was the case with 2004's Nobody Knows), I would have expected to see a terrible tragedy unfold!


But with the director of 2011's I Wish at the helm, I felt that it would be possible for this story -- that's based on an award-winning manga series by Akimi Yoshida -- to develop and conclude in a way that would leave the viewer feeling all warm and fuzzy inside; and this despite a couple of people in the movie, including the three older sister's great aunt (the venerable Kirin Kiki), having wondered aloud if the unusual living arrangement really would be able to work out!  Also, even while there are a few scenes that got me welling up (in a good way), there actually are more gently comic moments scattered throughout the work that had me chuckling aloud and even bursting out in laughter.


Especially the second time around, Our Little Sister makes for a wonderfully relaxing watch.  At the same time, even though there are zero moments of high drama or jawdroppingly spectacular action, I do feel that there's enough going in the film to make it a thoroughly involving watch.  What's more, I love the little details to be found pretty much everywhere in the movie -- many of which not only help create three-dimensional characters but also do such as establish how distinct are the personalities of the sisters: responsible and maternal Sachi, pretty and girly Yoshino, easygoing and unconventional Chika, and initially guarded, often observant Suzu.


Kore-eda's sure helming hand and the absolutely "spot on" performances of Ayase, Nagasawa, Koho and Hirose are a delight.  In general, Our Little Sister is packed with actors and actresses who are perfectly cast -- with supporting cast members Jun Fubuki (who also had supporting roles in Kore-eda's Like Father, Like Son and Yoji Yamada's Tokyo Family) and 14-year-old Oshiro Maeda (who had starred in Kore-eda's I Wish) also making particular impacts in the film.  And if you're anything like me, then many of their characters are ones that you'll find yourself wishing you knew real-life equivalents of and could hang out with them! :)