Hiroshima-style okonomiyaki deserves to be better known (and appreciated)! 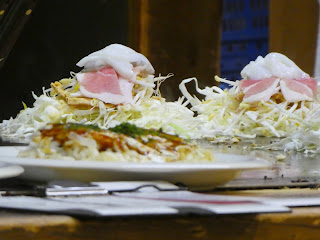 Hiroshima-style okonomiyaki in the making 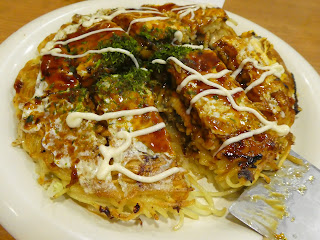 What I had for dinner on my first night in Hiroshima :b 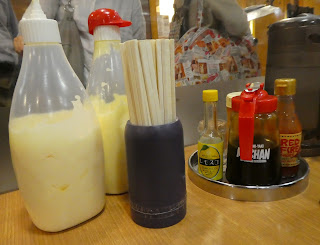 Optional condiments to add to the okonomiyaki mix if one's
so inclined (along with a bunch of chopsticks to choose from)! :)
Hiroshima has been on my list of Japanese cities for some years now.  But while I know that a first visit there is not really complete without spending time in the Hiroshima Peace Memorial Museum and Peace Memorial Park, I must admit that those two places most definitely were not the main reasons why I've long wanted to visit this city which many people will forever associate with the atom bomb.
Instead, the more I've learnt about and come to love Japanese food, the more I've got to realizing that Hiroshima is quite the foodie paradise; with Hiroshima oysters and Hiroshima-style okonomiyaki being at the top of many Japanese people's list of foods they must sample on a visit to this part of Honshu, Japan's largest island.
My first day in Hiroshima, I had a set lunch at an atmospheric eatery near the train station whose main dish consisted of beautifully juicy and delectable fried oysters.  And when it came time for dinner, I took my mother to a branch of Mitchan Sohonten, whose founders are credited with having invented Hiroshima-style okonomiyaki -- which, unlike the Osaka-style version of this savory pancake, layers the dish's various ingredients rather than more casually mixes them altogether.
The name okonomiyaki translates into something akin to "as you like it" because one is free to add all sorts of other ingredients to the basic cabbage, flour and eggs base/core.  The one I ordered at Mitchan Sohonten had squid, prawn, noodles (I chose ramen but one can also opt for udon), bacon and cheese layers too.  Oh, and oysters -- which I'm going to assume were local ones -- in the mix as well!
Also, although our okonomiyaki was served laden with okonomi sauce and some mayonaise, condiments were placed at the table that made it apparent that it's the done thing to add some more sauces if one's so inclined; with the options here including two kinds of mayonaise, extra okonomi sauce, a Tobasco-like hot sauce, and a local lemony seasoning by the name of Lemosco!
It may all sound a bit much to the uninitated but, in all honesty, just writing about this is making me hungry and pine for more Hiroshima-style okonomiyaki.  Unfortunately, like with Osaka's kushiage, this dish's reputation hasn't seemed to cross international borders (and, in fact, isn't even easily found in other parts of Japan).  Otherwise, I really believe that good and authentic okonomiyaki restaurants would gain quite a following and fandom; and, in this case, would be far more deserving of that than, say, ramen: which actually is one of the Japanese dishes I can't get excited about -- and which many denizens of Japan think is Chinese rather than Japanese!
Posted by YTSL at 11:59 PM

I can see that you prefer a lighter flavor than I do ... from the amount of mayo and sauce you put on your okonomiyaki!

I squeeze about 3 times the mayo haha.