Travelling, walking, eating and drinking a lot on my most recent Japan trip ;b 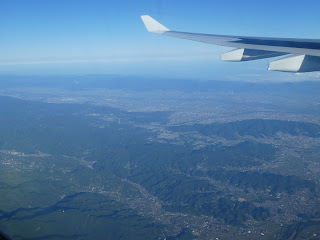 View of Japan from the plane I took there most recently :) 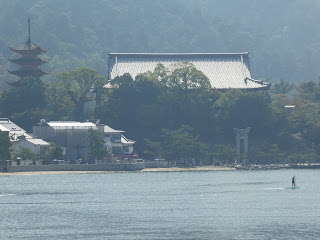 View from an Onomichi hilltop (and yes, I definitely recommending
clicking on the picture to view an enlarged version of it!)


Late last night, I returned to Hong Kong from my fifth trip to Japan with my mother.  Over the course of a little bit more than a week, we visited six different towns and cities along with one village and three UNESCO World Heritage-listed sites.  We also took a bunch of train, bus and ferry rides -- and one ride up a ropeway in my case (and two in my mother's).  In addition, there actually was a day when my pedometer clocked my having walked over 30,000 steps!


Before this trip, I hoped that I'd be able to get in a lot of walking to balance out what I knew would be a whole lot of eating (and drinking).  Fortunately, that did turn out to be the case; otherwise, I'd have gained more unwanted pounds again like I did on my Penang visit this past July during which I feasted on a lot more durian than I probable should have done!


Often, my mother and I made a point to sample area specialties (which included -- and those who are "up" on their Japanese foods will be able to figure out where we went based on the following mentions -- oysters, anago (salt-water eel), okonomiyaki, tai (red seabream) and kushiage).  And I think it's telling that the worst meal by far of the trip -- and, actually, that I've ever partaken of in Japan -- was at a restaurant that served more than one type of food, none of which seemed specific to the area.

While my mother didn't drink a drop of alcohol over the course of the trip (as would be expected of someone who is on the record as stating that she felt a bit tipsy after sipping one mouthful of sake one evening at Sake Bar Ginn!), I just as expectedly drank quite a bit of sake and beer while in the Land of the Rising Sun.  Indeed, rare was the meal (aside from breakfast) where my food went unaccompanied by an alcoholic libation.  At the same time though, believe it or not, I actually didn't drink any alcohol outside of meal times -- since I really do believe that sake and such are best accompanied by food (as well as that most Japanese foods go very well indeed with sake or beer)! ;b
Posted by YTSL at 6:55 PM

30000 steps is very impressive! Our pedometer app probably averaged about 16000 on our last trip. But then you're a hiker so I'm sure you're in much better shape :P

Let me guess ... kushiage ... did you fly into Osaka or something? But then some Japanese guy had told me about a killer kushiage place in Onomichi as well.

Seeing the pedometer having gone over the 30,000 mark was pretty shocking/surprising to me. But it accounted for why my legs were feeling so very sore that night! ;)

And yep, I did fly into Kansai airport and then spent three nights in Osaka before flying out from Kansai. :)