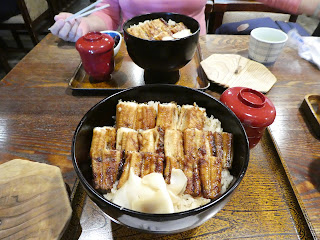 The thing to eat before getting on the ferry to Miyajima 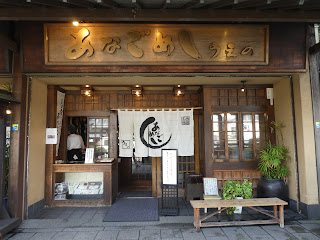 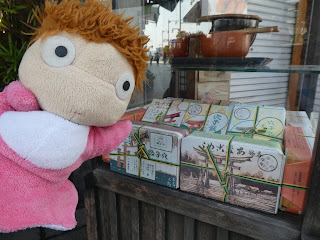 Or, if you're hurry, Puppet Ponyo points out,
you can get an anagomeshi bento box from Ueno! ;b
Close to 11 years ago now, I was persuaded by two friends to join the blogging ranks.  Ironically, while they long ago stopped updating their blogs in favor of posting on Facebook, I have continued blogging (even while having also finally become a member of the Facebook community a few months ago).
Among the reasons for my continuing blogging is that I've continued to get much out of reading other blogs.  As an example: Thanks to Paul's Travel Pics, I've not only felt compelled to go visit the far flung likes of Kanazawa and Luxembourg but also, when there, I've made a point to check out attractions and even pecific eateries which earned high praise from Paul.  And it was Paul's blog which alerted me to the existence of an over 100-year-old eatery located close to the pier at Miyajimaguchi where folks in the know will stop at to get a meal of anagomeshi (conger eel rice bowl) either at the restaurant or "to go" in the form of a boxed lunch.
After the train station at Miyajimaguchi was set up in 1897, a fellow by the name of Tanikichi Ueno hit on the idea of making portable meals of grilled slices of the local seawater eel on rice for train passengers.  Over time, he set up a restaurant where people could eat his signature creation.  And these days, many people are willing to wait for hours to get a meal at Ueno -- which has stayed in the family all this time, and whose fourth generation custodian is named Junichi Ueno -- in between getting off the train at Miyajimaguchi and catching the ferry over to Miyajima.
Alerted by Paul (and a Japanese friend who is acquainted with the practice of eating at Ueno as part of a Miyajima excursion) that this iconic eatery can attract quite the crowd, I made a point to go there outside of lunch hour and was rewarded by my mother and I needing to wait for just 10 minutes before we were ushered into this still physically modest-looking establishment's small as well as atmospheric dining area.  And although there were a few other dishes listed on the menu, we zeroed in on the anagomeshi: with my mother opting for a small-sized portion while I decided that I would be fine with the medium-sized one.
Although I've had anago before, it had always been at sushi restaurants -- and consequently just in bite-sized portions as part of a more diversified meal -- until this visit to Ueno.  But since I've eaten my share of unajuu and unadon (freshwater eel on rice) over the years, I figured I've had a good idea of what to expect of Ueno's anagomeshi; only it turns out that I wasn't entirely since this Miyajimaguchi eatery's signature dish doesn't come slathered with sweet soy sauce and has a noticeably smoky flavor whose notes combine with the moderately applied light sweet-salty glaze for a distinctive as well as very pleasant overall taste.
So good was this dish that I actually didn't have much trouble at all emptying the bowl despite it actually being rich tasting and pretty substantial.  And if it hadn't happened to be the case that the restaurant would be closed the next day (Wednesday; when we'd pass through Miyajimaguchi once more, on the way back to Hiroshima), I would have seriously considered stopping by at Ueno for one more bowl of anagomeshi!
Instead, I'm left with just the memory of that one meal at that justifiably popular establishment that put the pieces of anago sushi my mother and I were served at the ryokan we stayed in at Miyajima to shame.  And yes, I've got to deciding that it might be best if I don't eat any other anago for a while since doing so will only get me pining (even more) for that anagomeshi at Ueno! ;S
Posted by YTSL at 11:59 PM

Oh wow. You're giving me too much credit. I'm sure you would have found these places without me, but then I'm very happy that we share the same interests in our travels.

It's been almost a year since returning from Japan, and like you, I'm still avoiding Anago for fear of utter disappointment. Seeing your photos makes me miss Ueno even more.

Not at all: you deserve all the credit you get! And yes, I too am very happy that we appear to have similar interests and preferences when travelling! :)