Miyajima's Five-storied Pagoda and Hall of One Thousand Tatami Mats 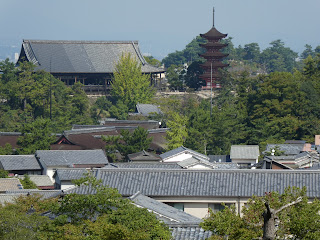 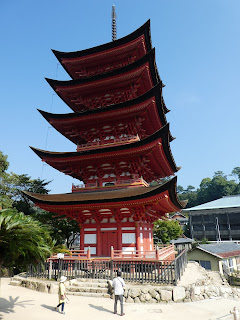 The Five-storied Pagoda is one of them... 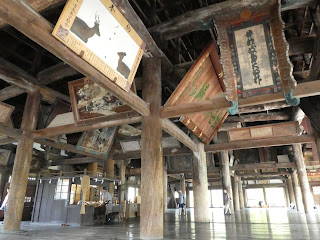 ...and Senjokaku (aka the Hall of One Thousand
Tatami Mats) is the other


In a few of the images in my Itsukushima Shrine photo-essay, one can see another prominent Miyajima landmark: the 27.6-meter-tall Five-storied Pagoda whose design features a combination of traditional Japanese and Chinese architectural elements.  Painted in vermilion shades like the great Torii of Itsukushima shrine, it's easy to spot because of its vivid coloring -- which is especially marked when the sun is shining on it -- as well as its height (which is augmented by it standing atop a hill).


The interior of the Five-storied Pagoda is decorated with sacred and auspicious Buddhist imagery, including lotus flowers, a dragon and the Kannon Bodhisattva along with Buddha himself.  The names of donors -- including 14 women -- are carved onto each of this 600-year-old structure's first storey pillars.  On its ceiling has been painted the Shingon Hasso sutra.


Unfortunately, none of these can be seen by regular folks as the Five-storied Pagoda is not open to the public.  So most people have to be content with admiring its exterior features and details.  And that's what many do, including from up close, before they proceed to the neighboring religious building that is open to the public (for a small fee) despite it actually having remained unfinished to this day.


Intended by Hideyoshi Toyotomi to house a library of Buddhist sutras, Senjokaku's name attests to its substantial size.  Measuring some 24 by 15 meters, its inside hall remains one of the largest buildings on Miyajima -- and when wandering around within its cavernous space, one can easily imagine how grand it would have been in completed form.


With its construction having been halted following its warlord commissioner's death 11 years after it was first ordered to be built, Senjokaku lacks a proper ceiling and its floor isn't actually covered by tatami mats.  Still, it's a pleasant spot to take a break, with a number of its visitors getting tempted to sit down in a doorway and/or on its verandah to enjoy the views and the cooling breezes that it seems to attract.

Although commissioned as a Buddhist building, Senjokaku now contains an altar used for Shinto rituals, next to which can be found a collection of very large rice scoops (or paddles), that Miyajima has come to be associated with by the Japanese.  At some point in its history, it officially became a part of Itsukushima shrine but its location hundreds of meters away from the main shrine complex along with its very different architectural style makes this wooden structure feel very different indeed -- and I can well imagine many visitors to this sacred island who go there for just a few hours electing to give Senjokaku and the climb up the hill it's on a miss!
Posted by YTSL at 11:59 PM