A "ryokan light" experience at Jukeiso 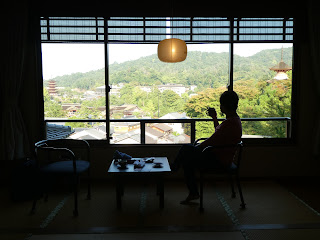 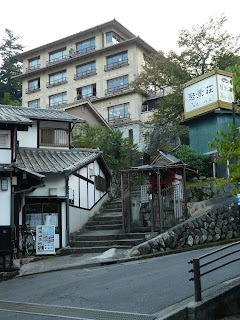 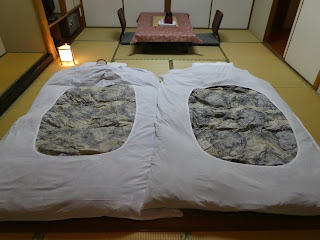 As Puppet Ponyo can attest though, bedtime was a pretty
traditional affair, involving futons laid out on the tatami floor :)
On our trip to Japan last November, my mother and I had stayed (along with two friends) for two nights at a very traditional as well as luxurious ryokan in Hakone where, among other things, we had enjoyed incredibly courteous service and also meals that were to die for.  In retrospect, I'm afraid that the Gora Kansuiro set the bar way too high; so much so that our next ryokan stay would inevitably feel anti-climactic.  And so it proved with regards to our experience at the Miyajima ryokan where we spent a night early on during our visit to the Land of the Rising Sun last month.

A modern ryokan, Jukeiso offers up what felt like a "ryokan light" experience in comparison to what's offered up at the Gora Kansuiro.  Sure our room in Miyajima had a tatami floor, its design elements included an alcove (tokonoma), complete with a floral arrangement and hanging picture, and we slept on futons laid out by the ryokan staff while we were eating undeniably Japanese food for dinner.  Also, we were indeed given yukata to wear as a matter of course
However, the ryokan building was made of concrete rather than wood and plaster, and we didn't need to take off our shoes upon entering the building, only after we were in the genkan of our room.  Also,  unlike at the considerably old school-feeling Gora Kansuiro, our room at Jukeiso's front door was lockable (from the inside as well as outside) and the Jukeiso staff didn't flit in and out of our room even half as much as at Gora Kansuiro -- and, frankly, also weren't as friendly as well as attentive.
In addition, Gora Kansuiro had Jukeiso truly beat in the food and drinks department.  With regards to the latter: I had hoped to see Dassai sake among the sake selection for dinner (like had been the case for the trolley service on the shinkansen we had taken from Shin-Osaka to Hiroshima) but it turned out that my only nihonshu options were "hot" or "cold" honjozo.

With regards to the former: When making our Jukeiso booking, I learnt that there had been "economy", "standard" and "deluxe" meal options -- and had specified our "deluxe" choice.  In all honesty though, when our meals were served -- in a communal dining area rather than in our room (as had been the case at our Hakone ryokan) -- I really did seriously wonder if there had been a mix up in our meal options!
To be fair, our dinner did include pieces of oyster, anago (conger eel) and Wagyu (Japanese beef).  And we definitely did not lack as far as quantity was concerned at both breakfast as well as dinner at Jukeiso.  But there sometimes was a slapdash feel to our meals; not least because the dinner service was so rushed that some hot dishes brought out from the kitchen before we had finished the courses served before them ended up becoming cold (or, at least, lukewarm) before we got to them.
On a more positive note: thanks to Jukeiso's hillside location, our room had a very nice view that included a couple of pagodas (including the Five-Storied Pagoda located close to the Hall of One Thousand Tatami Mats) and the bath that each room's guests could reserve for half an hour had an even nicer view that included Itsukushima shrine's great Torii!  And I appreciated our getting a courtesy ride from the Miyajima ferry pier to the ryokan (which is located around 30 minutes' walk away), and our driver taking a scenic route that took us through forested areas of the island that we'd not otherwise have seen.

All in all though, I must admit to wishing that I had tried out a different, more traditional -- and/or luxurious -- and generally atmospheric ryokan for our Miyajima stay.  Ah well, I now know better for next time:  not only for when I next visit that attractive sacred island but just generally when I next decide to stay in a ryokan rather than a Western-style hotel in Japan.
Posted by YTSL at 11:59 PM

Hey at least the prices seem pretty reasonable for Miyajima! I imagine it must have required a little hike to and from the shrine?

Yes, the price didn't seem too bad in view of the horror stories I had heard about the price of ryokan in Miyajima. After visiting there, I must conclude that they relate to Iwaso, which is THE luxury ryokan on the island (and accordingly high priced).

And Jukeiso's actually not that far away from Itsukushima (or, for that matter, Daishoin) -- though it is a bit of a walk from there to the Miyajima ferry pier. Looking at the map of Miyajima, the ryokan which does seem to be in the most remote location would be Momijiso.