Daishoin, the center of Buddhism on the sacred island of Miyajima (Photo-essay)

As befits an island considered sacred by the Japanese, Miyajima is home to a number of Buddhist temples as well as Shinto shrines.  Among these is Daishoin, the head temple of the Shingon Buddhist sect founded by the legendary Kobo Daishi which, in those centuries up until the Meiji Restoration (in 1868) where there were greater ties between Buddhism and Shinto, was in charge of all of the rituals at Itsukushima shrine.

Still the center of Buddhism on the island, Daishoin's main temple complex is situated at the base of Mount Misen.  I'd like to return to Miyajima at some point in the future and hike up the trail leading to the mountain's summit, whose route passes by some others of Daishoin's buildings, including one where a holy fire has been said to have been burning for 1,200 years.

The two days that my mother and I were on Miyajima were too hot to attempt to do so though, and too hazy for me to even want to take the cable car up the mountain.  Instead, I was happy enough to devote time and what already involved quite a bit of energy and effort to exploring the sprawling main temple complex that's home to several interesting buildings and hundreds of statues that visually ranged from the awe-inspiring to amusingly kitschy! 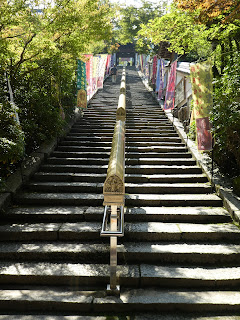 It's all too common to encounter intimidating looking flights of
stone steps like these when visiting temples or shrines in Japan! 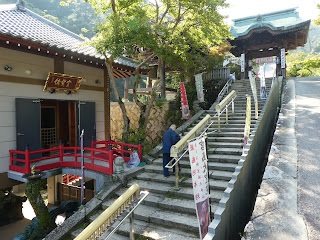 Happily, the nature path we took from Jukeiso
allowed us to bypass many of those steps! ;b 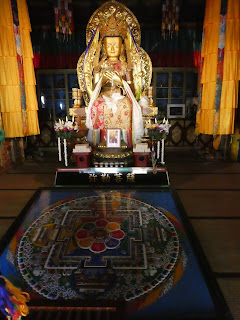 The Kannon-do is home to (expectedly) statues of Kannon, and
(less expectedly) Tibetan mandalas and images of the Dalai Lama 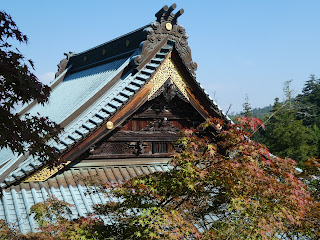 There's beauty to be found in the Kannon-do's exterior too ;b 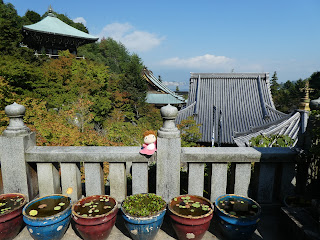 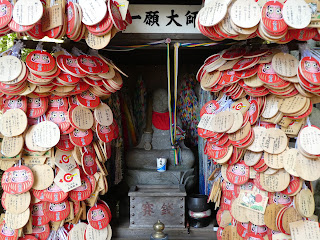 Ema abound in the vicinity of the Ichigan Daishi, to whom those
who pray for only one wish are said to have it granted by Kobo Daishi 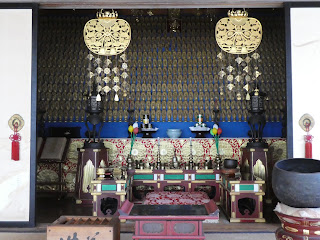 In the upper floor of Daishoin's tallest building,
the Maniden prayer hall, can be found
1,000 statuettes of the Buddha of Infinite Light 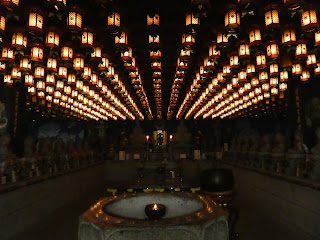 Sounds of chanting led me to and into the dimly lit
Henjyokutsu Cave which I would not have been surprised
to find was a columbarium but actually isn't!
Posted by YTSL at 11:36 PM

I visited Miyajima on a much too brief day trip from Hiroshima a long time ago. Looking at these photos and text, I realize how much I missed on that visit. The temples, shrines, and especially your links to the areas near to Mount Misen - reveal Miyajima to be a giant rock lover's nirvana...In quite a contrast to Puppet Ponyo's foreground pose in your previous entry, Anagomeshi at Ueno, here she appears quite small, yet still enhances the photo with her inherent charm.

Miyajima is one of those places I visited this past September that I feel like I'll need to go back to, in order to do it more justice. And the next time I visit, I think it'd be good to spend the night there again, though maybe not in a ryokan with its attendant time restrictions.

Also, yes, I reckon that Puppet Ponyo does frequently add charm to photos in which she features...and I'm glad that you do too! :)