One of the very first things I do after arriving in a city, town or village in Japan is to go to its tourist information center to pick up an area map and also relevant brochures, pamphlets and magazines.  In Hiroshima, the issue of the Seeking Hiroshima sightseeing guide that I came across turned out to be very helpful not only with regards to information pertaining to Hiroshima city but also Miyajima, the near mythical isle located in Hiroshima Prefecture.  And it was thanks to it that I knew precisely when the tide would beat its highest and lowest the day that visited!

The reason why this is important to know this because, when the tide is high, the great Torii and other structures of the UNESCO World Heritage-listed Itsukushima Shrine look like they're floating in the water and when the tide is low, people can actually walk right up to and touch the great Torii (that's located some 200 meters away from shore).  And yes, I did actually time it so that my mother and I were at Itsukushima Shrine at high tide -- and thus were able to see it at its most picturesque -- the day that we arrived in Miyajima and thanks to our electing to stay overnight on the island, we were also still around when the tide went down to its lowest level that day! :) 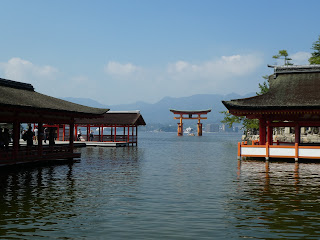 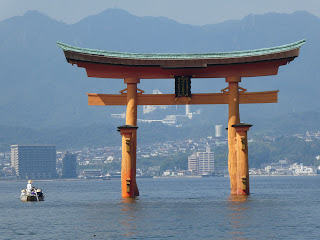 The great Torii of Itsukushima shrine is some 16.6 meters high, and
the eighth that has stood on the same site over around nine centuries 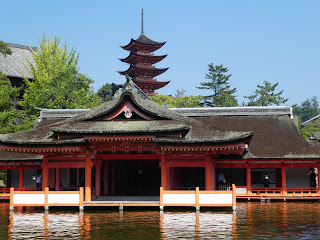 Dedicated to three daughters of the sea goddess, Itsukushima is
a Shinto shrine with more than 1,400 years of history behind it 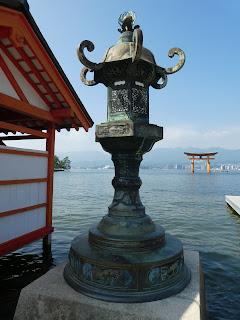 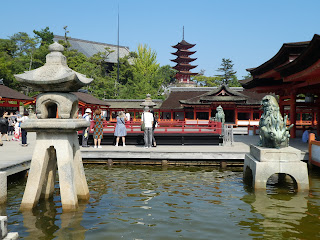 The shrine is so beautiful at high tide that even the large nunber
of tourists about the place couldn't distract me from appreciating it! 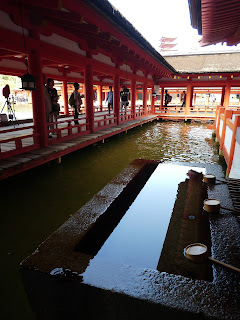 At this ancient Shinto shrine, water could be found
in many other places besides the water troughs... 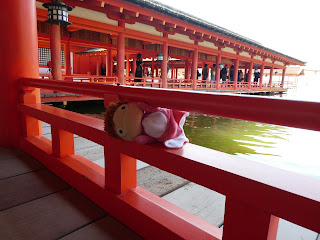 I think all the water around us got Puppet Ponyo wanting to get
closer to the water than I think should have been the case... ;S 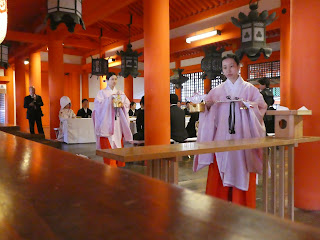 And as it so happened, a wedding ceremony was
taking place when we visited Itsukushima shrine! :)
Posted by YTSL at 11:59 PM

Yvonne, what a beautiful place. This shrine is going on my list of "places to see if I'm ever in Japan" for sure! Thanks for sharing it with us.

Thanks for continuing to check out my blog! :)

Itsukushima shrine is indeed a beautiful place. I worried that it had been over-hyped but, really, if one visits at high tide, one really feels like one's in a special, even magical, place. And I hope you'll make it out there at some point in your life.