Musings resulting from a visit to the Hiroshima Peace Memorial Museum 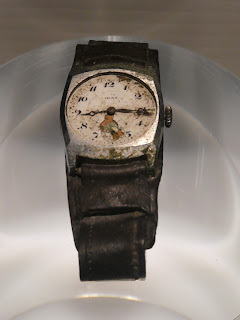 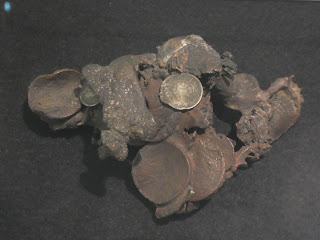 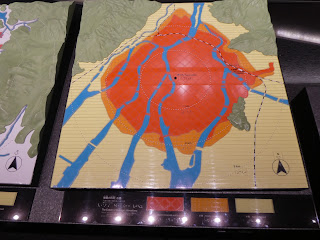 Imagine the damage caused to humans as well as objects
in the wake of the atom bomb being dropped on Hiroshima
On my first ever visit to Japan back in 1982, I was taken to the northwestern Kyushu city of Nagasaki and saw shocking sights in its Atomic Bomb Museum which have been seared into my brain and memory.  Three and half decades later, I paid a visit to the western Honshu city of Hiroshima and, even while part of me dreaded doing so, felt obliged to also spend time at the Peace Memorial Museum of the first ever city in the world to have had an atom bomb dropped onto it.
Ongoing renovation work has resulted in the closing of part of the museum until July 2018.  But in view of its newer East Building being open when my mother and I visited, and its possessing a total floor capacity of 1,615 square meters, I think it fair to say that we still managed to see (and hear) plenty on our visit to this museological institution which regularly has more than one million visitors annually.
The way the exhibits are set up, one first gets a glance at how Hiroshima looked shortly before the dropping of the atomic bomb, then an overview of the actual event that took place at 8.15am on August 6th, 1945.  Next come details about the events leading up to it (such as those relating to the Manhattan Project all the way to the atomic bomb test in the New Mexico desert but also salient political and military developments, including the Japanese invasion of Malaya and attack on Pearl Harbor), followed by historical information about Hiroshima before, during and after World War II, then -- finally and most devastingly -- a presentation of the effects of the dropping of the atomic bomb by way of the exhibition of actual objects damaged by the bomb and telling of stories about actual atomic bomb victims, a large percentage of whom were civilians and quite a number of whom were children.
Early on during my visit to the museum, I felt like I was being more intellectually than emotionally impacted by what I was seeing and hearing there.  Feeling able to actually critique the exhibition design and narrative, I got to thinking such thoughts as that certain display panels probably should have been placed further apart in order to better deal with the sheer volume of visitors to the museum and, also, that the information being supplied was surprisingly as well as admirably even-handed.
Then I got to the displays which showed the wounds sustained by individual people.  The photos may be in black and white but believe me when I tell you that they totally can make you see, realize and even feel how much pain, suffering, misery and agony had been inflicted on actual human beings -- and when you consider that the number of victims of the atom bomb dropped on Hiroshima is estimated at over 100,000, the sheer scale of what was wreaked really gets one feeling such incredible sorrow and horror.

At this point, you invariably get to thinking: Hiroshima didn't deserve this.  Even though -- as pointed out in the section of the museum detailing the city's history -- it had been home to a major Imperial Japanese Navy base and been the major despatching point for the military for the Sino-Japanese and Russo-Japanese Wars.  This is not just because the vast majority of the Hiroshima atom bomb victims were not military personnel.  Rather, it's just because the damage wreaked by the atom bomb comes across as so very inhumane.
Among the museum's key objectives is to convey Hiroshima's deepest wish for the elimination of all nuclear weapons and the realization of a genuinely peaceful international community.  And I must say that among the saddest parts of my going to to this truly "must visit" museum is that those wishes are so very far away from being realized; this not least, thanks in no small part to the idiocy/lunacy of Donald Trump and Kim Jong Un, the world now appears to be closer to a Third World War and/or the use of nuclear weapons far more powerful than the atomic bombs dropped on Hiroshima and Nagasaki than it has been in years, if not ever.
Posted by YTSL at 11:47 PM

I couldn't sleep at all on the day that my teacher in elementary school showed us the pictures of Hiroshima. Completely destroyed city, melted coins, glasses, telegraph-pole, and charred body, body, bodies.

I don't deny the fact that the atom bombs consequently saved many people who might lose their lives in prolonged war, but it’s just too much…even if it was punishment from god to my country. Hope everybody in the world will take a look of those photos once and understand what will happen when nuclear war breaks out. It's hell.

Thanks much for sharing about your learning about Hiroshima while at elementary school and I absolutely can understand how emotionally devastating the experience must have been. Also, you're right: the pictures really depict hell on earth -- and human-made hell at that. So very terrible indeed.