Spending many happy hours at Beertopia 2015 :) 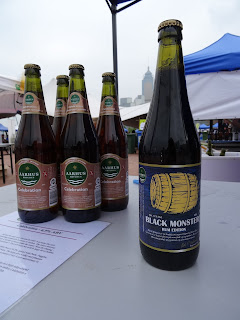 There were some rum (pun intended!) flavors
of beer on offer at Beertopia this year! :b 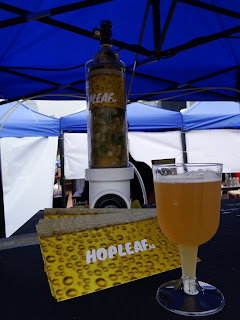 The Kagua Blanc with extra yuzu was refreshing
and light tasting -- perfect on a hot day! :b 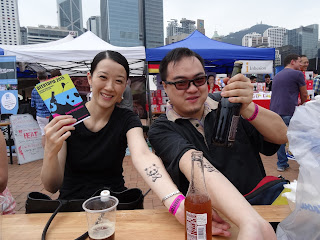 Two friends from Sake Bar Ginn with matching (temporary) tattoos
enjoy some time out before heading to work later in the day :)


I enjoyed myself so much at Beertopia 2014 that I couldn't help but wail and gnash my teeth upon learning that I'd have to wait six months longer for this year's installment of Hong Kong's largest craft beer festival after the organizers moved its dates from March to October.


I think the idea behind this decision was that there'd be better weather during this time of the year -- since it often rains a lot in March but less so in October.  So I can imagine that the organizers and vendors weren't too pleased when the heavens actually did open for part of the evening yesterday -- the one full day of Beertopia this year!


To be honest though, I don't think that the downpour dampened too many spirits -- with the bulk of attendees going over to the covered live music area to wait the rain out rather than decide to cut short their time at the beer fest.  At that point in the day, I had already spent several happy hours at the event, having arrived soon after the second and final day of Beertopia began at noon -- and despite my not having thought that I'd be able to last all that long, I ended up leaving less than an hour before the craft beer extravaganza came to a close at 11pm!


If truth be told, I felt a bit disappointed when I first got to the Central Waterfront -- with Beertopia 2015 looking smaller and quieter than the previous year's edition of the fest.  And while last year, I was happy enough to see over 500 beers available to taste, this year, I was looking for more beers to be available on tap (as opposed to "just" bottles or cans) than turned out to be the case -- along with a greater variety of beers which I hadn't tried or heard of before on the plate.


My spirits perked up though when I saw that this year, Nippon Craft Beers' Kagua (whose Blanc and Rouge versions I've tried and love -- but had only ever drank from bottles) was available in draft form over at the Hop Leaf booth -- and have to admit to having had more than one (4 oz-sized!) glasses of those beers, and would have had even more if the 8% ABV Kagua Blanc hadn't run out midway through the day!  And I also was pretty happy to see Shanghai's Boxing Cat Brewery represented at Beertopia again, and this time around, was able to try their Contender Extra Pale Ale, a 4.9% ABV session beer, for the first time.


One of the fellows manning the Boxing Cat Brewery's booth beamed with pride and happiness upon hearing me tell a friend that I wished that it were based in Hong Kong because it's so much better than all the Hong Kong representatives I've ever tried.  And once again, I'm sad to say that the worst beer I had at Beertopia was a Hong Kong beer -- with the ones from the Black Kite Brewery that I sampled tasting more watery than a good craft beer should, and its amber ale having an unpleasant metallic first taste.

On a more positive note, Nordic beers impressed once again -- and although Denmark's Aarhus Bryghus' beers were only available from bottles rather than on tap, I still loved the ones I had so much that I ended up purchasing two large bottles of the brewery's 9% ABV 1965 Tribute barley wine to share with friends at some point in the near future!  And it's not just me either who fell in love with this Danish craft brewery's beers -- with a friend purchasing a couple of bottles of its 8% ABV Imperial Stout to take home to drink!

On the subject of friends: I arrived at Beertopia on my own but ended up meeting up with three friends there and bumping into a couple of hours.  Funnily enough, while everyone I recognized at last year's Beertopia was a work colleague, this time around, they were either staff or regular customers (including, incidentally, the founder of Beertopia) at Sake Bar Ginn, the bar I've voted as my favorite (see here and here) for the last two years running! ;b
Posted by YTSL at 10:00 PM

I've had some pretty good hand made beers. One of my cousin is into making fruit beer. Sure hope all has fun at "Beertopia"

I've tried some fruit beers but have to admit to not being as much a fan of them as some fruit wines and liqueurs I've had. About the most fruity beer concoction I like is shandy (i.e., 2/3rds beer and 1/3rd 7-up/Sprite). ;b