Not the kind of experiences one wants to have while on holiday! 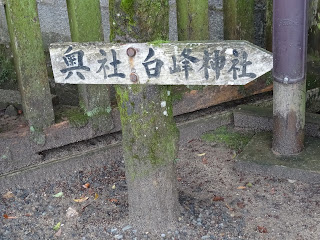 A signpost within Konpira-san's compound which I interpreted
(accurately, I think!) as pointing in the direction of the inner shrine 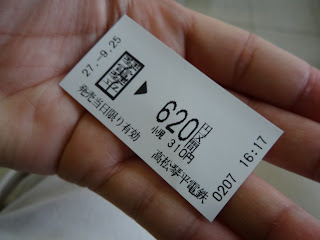 My ticket for the Kotoden train journey from Kotohira
back to Takamatsu didn't contain a single word of English!

In retrospect, I probably overdid it the day I went to Kotohira.  After all, not only did I go all the way up and then down Konpira-san's 1,368-stone-stepped Sando Approach but I also hunted down and checked out the world's oldest Kabuki theater, and then enjoyed a night on the town back in Takamatsu!

Whatever the reason, I slipped and fell in the hotel later that night -- but didn't think much of it until I woke up at around 4 in the morning, felt part of my left foot throbbing and, upon switching on the lights, saw that one of my toes had become more colorful and swollen than I would have liked it to be!  And if things weren't bad enough, after I had gone and found some ice to put on that damaged toe, and was just about ready to get back to sleep, a very loud alarm -- that was a mix of a blaring sound and very scarily official sounding Japanese instructions being uttered -- got everyone at the hotel out of their beds and rooms, and into the streets via several flights of an emergency staircase!

After I made it down to the ground floor from my sixth floor room, I found my fellow hotel guests milling around outside in various states of undress; with those who had fled down the fastest looking to have the fewest items of clothing and most disheveled looking hair on whereas those who only joined the rest of us several minutes later had taken the time to pack their bags as well as fully dress up.  Only after we had stood around for close to half an hour (first in shock, followed by fear, then bewilderment and lastly some frustration) did a message come from a hotel employee -- in Japanese only, before being translated by a gracious guest into English for the non-Japanese present -- that someone had accidentally set off the hotel fire alarm and that it was actually safe to go back to our rooms!

It took a while for me to get back to sleep and after I woke up, it took me sometime to want to get out of bed because the pain in my foot was more considerable than it had been a few hours before.  All kinds of panicked thoughts went through my mind before I decided that my first plan of action would involve my going down to the hotel reception and asking if I could be directed to an English-speaking doctor.

Although I had considered alternatives if this did not work (like going to the tourist information center for help or a facility known as I-Pal Kagawa which facilitated "international exchanges"), I actually was ably directed to a medical clinic just around 10 minutes walk (or, rather, limp!) away from the hotel.  When I first started speaking to the clinic's receptionist and nurse, they were noticeably freaked out at having to use English.  Very fortunately for us though, a patient who was extremely fluent in English came to our rescue and with a combination of her help and some sign language, I managed to communicate that I needed to have a doctor see whether I had broken a toe.

Like the other clinic staff, the doctor who saw me was reluctant to speak English but it also was pretty obvious that he could understand the English I spoke to him.  We also ended up using a fair amount of sign language to communicate -- and I must admit to nearly laughing out loud when I asked him, using a "breaking" gesture and pointing to my toe, whether I had broken my toe and he indicated that wasn't the case by making the Japanese sign for "safe" that involved his fashioning a "roof" with his hands and putting that over his head.  For, really, it felt like we were playing charades at times!

At times like these, one is very aware that one is a stranger in a foreign land -- and one whose language you don't know much at all of, to boot.  Matters definitely would be scarier if I weren't as convinced as I am that many Japanese people can in fact understand English (but just are reluctant to speak it, for fear that they don't do it well).  Incidentally, I was amused that after I collected my medication and paid the bill for my treatment (which was far less expensive than I had thought it would be), the receptionist bid me to "have a nice day" in very clearly enunciated English!

Two other things that I have long felt about Japan and the Japanese also were confirmed over the course of my (thankfully minor) medical emergency.  The first is that people there -- not just the folks working at the establishments you pay at but complete strangers who happen to be nearby -- really do try to be very helpful when there's someone noticeably seeking assistance.  And the second is that there are many things about the place (including its first rate facilities) that makes one feel safer and more secure than in many other parts of the world.

Consequently, even while one most certainly doesn't want to get into emergency situations when on holiday, Japan is probably one of the best places for that to happen.  And to those readers who are wondering: the toe turned out to not be in as horrible a state as I had worried that it was; and I ended up being able to move around better than I thought I would be.  Still, I must say that I'm super glad that I visited Konpira-san before the accident happened, as there is absolutely no way I would have been able to go up to even its main gate, never mind the shrines beyond it, on feet that included a newly enlarged and technicolor toe! ;b
Posted by YTSL at 6:53 PM

What an awful situation to find yourself in in a foreign country. I can relate to your toe incident but combined with the fire alarm in the middle of the night I think your behavior was amazing. Not sure I would have remained as calm as you seemed to be. I enjoyed your up close and personal descriptions with your more analytical ones. I found this blog entry great...though maybe considering your toe and the middle of the night fire alarm you didn't....

I'm glad you enjoyed reading this blog entry as it's different from my usual blog posts and I wondered if I was being too indulgent for writing it since it doesn't contain much useful information about places other people can visit, etc.

On a lighter note: you may be amused to learn that when the alarm rang, I thought to throw Puppet Ponyo along with my money and passport -- but not my also precious camera! -- into my backpack before running out of the hotel room! ;)

Glad to know the injury is not serious. Maybe next time if you require assistance in Japan and if you are fluent in Putonghua, you might like to give it a try. In the past decade of so, there are many Japanese flocked to learn Chinese very seriously.

I have ex-colleagues in Tokyo & Osaka who could read and write in Traditional Chinese. Most of these bunch of ex-colleagues are fluent in Putonghua and Some are even fluent in Cantonese.

Glad to hear that the injury is not serious. And it is interesting to read about some travel adventures of a different nature once in while.

On my second trip to Japan I find Japanese people most willing to speak English after you start the conversation with a few words in Japanese (it turns out that all the Japanese dramas I have been watching actually made me an OK conversation starter ;)) as you wisely observed many know English but reluctant to speak for fear of not doing it well.

Needing medical assistance on a trip happened to me as well and one feels more vulnerable than usual even if it is in a country where you can speak the language.

I actually know Japanese than Putonghua even while knowing far more English! Also, lots of mainlanders visit Japan these days but I think they tend to stick to places like Tokyo, Kyoto and Osaka. And in Shikoku, I heard very little Putonghua being spoken -- and quite a bit more English and Cantonese -- among the obvious foreigners, actually!

Also, I know a few Japanese (who've worked on the mainland) who can speak Putonghua -- and it makes sense that they can read Chinese since Kanji is, if I'm not mistaken, pretty much the same as traditional Chinese characters. The thing though is that I know that English is a compulsory subject in Japanese schools and, of course, Kanji is taught in Japanese schools but don't think that's the case with Putonghua.

I know what you mean about (some) Japanese people being more willing to speak English to you after you first say something to them in Japanese. I think for me, it's become pretty much a given that I at least say something like "sumimasen" before I proceed to make a request, ask a question, etc.

Also, don't know if you've discovered that many Japanese can actually read English better than they can hear or speak it. So sometimes, it can work to write something out rather than say the word(s) to a Japanese people.

They are indeed a shy bunch, one time I swear one of the passages under the Shinjuku station people scattered like the read sea as I approached with my map marching on (I got the help of a foreigner in the end). One other time I remember two teenagers actually ran away (literally) only to return when an older person severely scolded them and were able to help me in the end. This time though I actually was able to find restaurants, bookshops etc. by asking people, manage conversations at the smoking spots and find bookshops etc. The power of drama watching surprised me.

It never occurred to me to write things up! You are right, that is an excellent tip for communication.

Thanks for sharing your amusing "when in Japan" stories. I'd beg to differ with you though re thinking that the Japanese are a shy bunch. After all, many of the men seem to thinking nothing of urinating in public (and yes, I have been a (shocked) witness to this more than once!) and both the women and men alike are oh so very comfortable to go naked in public baths! ;D

I have never been to a public bath (I have a visible tattoo and didn't want to make anyone uncomfortable) in Japan, so I wouldn't know.

I meant that they are shy when it comes to speaking a foreign language but after they are used to you, then it is not different than anyone else (meaning that it starts to depend on the personality rather than other stuff)

And after being in India twice, I wouldn't bat an eyelid if I saw someone urinating at a main street during day time.

If I remember correctly, your tattoo's not very large. I think you could put a plaster over it and go into a public bath in Japan if you *really* wanted to... ;)

And oh my re your India comment. Have to say that it is one country I don't have great urges to visit any time soon!