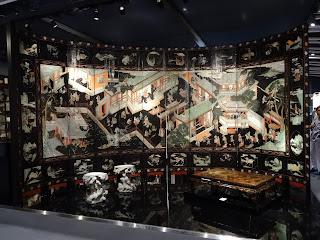 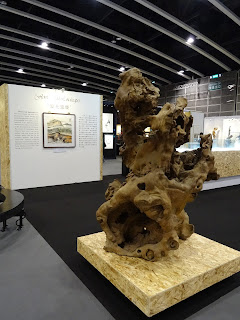 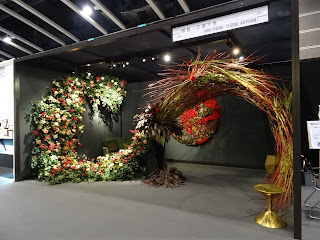 
Two years before Art HK (now known as Art Basel Hong Kong) came onto the scene, Fine Art Asia was already up and running.  Now in its 10th year, the international fine art fair -- which runs this year between October 3 and 7 -- is being staged at the Hong Kong Convention and Exhibition Centre which also plays host to Art Basel Hong Kong (and assorted other events including the HK Film Mart and pop concerts).


But although Fine Art Asia boasts a far greater range of art than the blockbuster art event which these days takes place in March -- what with this art fair's pieces including decorative arts (think furniture) and wearable art (think jewelry) as well as paintings, drawings, calligraphy, sculpture and installation works -- it's actually quite a bit smaller than the younger event.  Despite this not being the first year that I attended it, the previous time had been long ago enough that I had forgotten that it doesn't take up even one third of the space that Art Basel Hong Kong does.


Actually, after having seen the other art fair develop so rapidly and well in such a short period of time, I expected to see large, enthusiastic crowds too at this longer established art event.  Instead, the two exhibition halls taken up by Fine Art Asia this year were on the quiet side (and I'm going to assume that their being on the HK Convention and Exhibition Centre's upper floors won't have helped in terms of attracting "walk in" visitors).


On one hand, this made for an atmosphere that could be described as more "subdued".  On the other hand, this resulted in Fine Art Asia possessing a more "exclusive" air; a feeling that was further heightened by the design of many of the exhibition booths making them look like "stand alone" galleries rather than being more open plan.


For myself, what I noticed most -- and exulted over -- was that one didn't have one's views of the art pieces blocked by crowds the way that can be the case with certain popular works at the zoo that Art Basel Hong Kong has at times become.  And with 100 galleries from Hong Kong and beyond (including London, New York, Paris and Tokyo but also, more "exotically", Belgium and Beirut) participating in this year's edition of Fine Art Asia, there was plenty to see -- without feeling overwhelming by the quantity (rather than quality) as can be the case at the other art fair.


Soon after I entered the exhibition area, the booth of French gallery Ateliers Brugier caught my eye.  Pride of place there is given to a 12-panel Kangxi period coromandel screen decorated with a detailed, bird's-eye view of a palace, its gardens and its inhabitants.  But I also found myself standing for several minutes in front of an elegant 18th century Japanese six-fold screen on which is illustrated a pine tree (that got my mind thinking back of the ones I saw at Ritsurin Koen just a little more than a week ago) and flowers on a gold background.


On the contemporary end of the spectrum, I adored the colorful paintings of French artist Isabelle Duret-Dujarric being showcased in Hong Kong-based The Spectacle Group's booth.  In particular, I liked those of works that had a three-dimensional quality to them due to her rich daubs of paint being so thick that they break out of the flat plain that's the normal province of paintings.  (And I'd have to say that her works are among those which one really needs to see "in person" because photos just will not be able to do them justice!)

On the special exhibitions front, I again enjoyed seeing both antique and new works being showcased.  Incorporating ceramics, wood creations (such as beautifully decorated huanghali brushpots as well as a nanmu root resembling a scholar's stone that, in turn, resembles a mountain landscape) and more, the Flowers and Landscapes exhibition was made extra enjoyable by including well written information.  In contrast, there was little written information about Kirk Cheng's floral creations.  Happily though, his are the kind of work that please the eye and therefore can be appreciated even without grasping their meaning! :)
Posted by YTSL at 10:11 PM

I feel a strong resonance just looking at your photo of the nanmu root. You're right, it does look like a scholar's rock (gongshi). The simple tan-colored base on which it is mounted, complements this masterpiece of nature's sculpture. This would be an asset to any garden and is worthy of being placed in a museum. Thanks for this glimpse into Fine Art Asia 2015.

I'm glad you liked this glimspe into Fine Art Asia. I get the feeling that this fair hasn't attracted the amount of attraction that the folks behind it wished it had... ;S