The last three birthdays I've had have been spent in Japan.  Two years ago, I paid visits to Kyoto's Ryoanji (of Zen rock garden fame), Ninna-ji and Kitano Tenmagu on my birthday.  Last year, I biked across the Kibi Plain on the anniversary of my birth.  And this year saw me on the island of Shikoku, with my main goal that day being to make it up (and then down) the close to 1,400 stone stairs of Konpira-san, an ancient sacred site high up on a hill in Kotohira.

A Buddhist and Shinto holy place for 1,000 years, Konpira-gu (AKA Kotohira-san or Konpira-daigongen) officially became solely a Shinto shrine dedicated to the guardian kami of fishermen and seafarers during the Meiji period, and latterly also has been looked upon as a protector of international as well as local travellers.

Being someone with international traveller tendencies, I felt it imperative to go check out this ancient shrine -- and rather than be put off by "one of the most difficult shrine approaches in Japan", I looked forward to the experience that I figured would be memorable, and to check out one of the larger shrine complexes I've been to in the country... 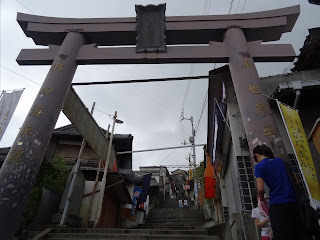 Pass through the large torii gate to get on the 1,368 stone steps
that make up the Sando Approach up to Konpira-san 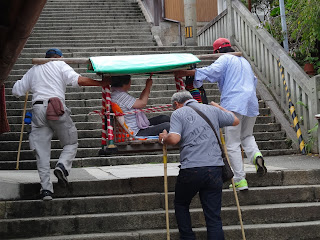 The aged, infirm and others willing to pay the price are carried up
in a palanquin up the first 225 steps to the shrine's main gate 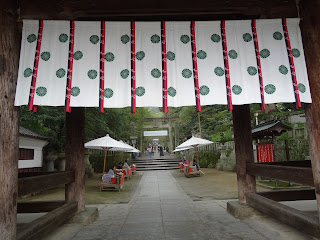 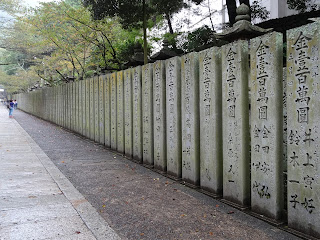 Each of the hundreds, if not thousands, of stone markers
found on the sides of the path are records of donations
made to this shrine in Kotohira 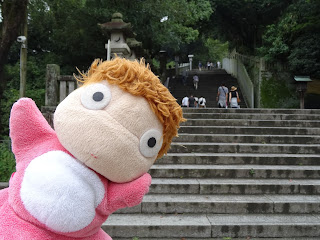 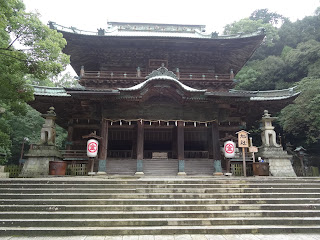 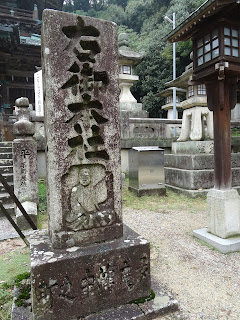 The stone monk image points to more stone steps you have
to ascend in order to get to Konpira-san's main shrine... 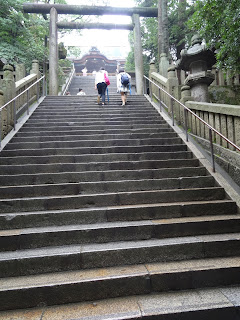 Climbing those stair a few times would give you a heart attack or improve ones health.

Teehee -- that's definitely one good way to look at it and summarize the experience! :D