Inside the Kanamaruza Theatre, the oldest Kabuki playhouse in the world 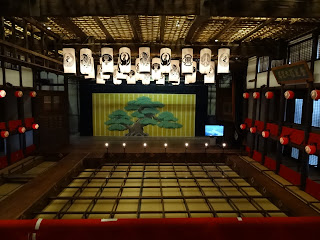 The view from the "nosebleed" seats of the oldest
kabuki theater in Japan (and, for that matter, the world) 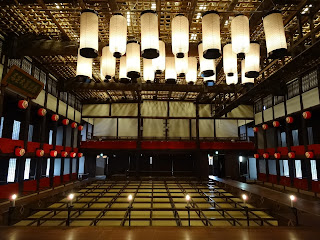 I felt privileged to be allowed to stand on the stage of
the Kanamaruza Theatre on my visit to that venue :) 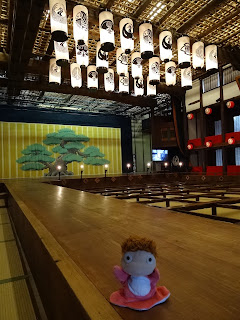 Puppet Ponyo atop a runway used by the
(male only) performers during a Kabuki show
After walking down more than 1,000 of the stone steps that make up Konpira-san's Sando Approach, I fortified myself with one of those wonderful cones of soft serve ice cream that is yet another thing that seems to taste better in Japan than anywhere else in the world.  And even while I still didn't feel completely refreshed, I told myself that I still wasn't done sightseeing in Kotohira -- not while the oldest Kabuki playhouse that's still in existence lay just a few hundred meters away to the left of the Sando Approach's 22nd step.
Because there are few English language signs about in this small Shikoku town with a population of less than 10,000 (as of May 2011), it took quite an effort for me to locate the Kanamaruza Theatre (and it didn't help that I didn't quite know what a Kabuki theater actually looks like!).  Upon getting to the venue, I was asked to remove my shoes and then met my guide to the premises: an elderly and very traditional-looking Japanese gentleman who I was surprised to discover was highly fluent in English!
Also unexpected was my being allowed to set foot on the Hanamichi (a wooden runway on which Kabuki performers walk along to the main stage area but on which they also perform) and the main stage area, the back stage and even the upper floor of this playhouse where such as the dressing rooms of the actors are located and the basement (known as naraku, meaning abyss) where I got to see and touch the equipment used to do such as enable the actors to rise and descend between it and main stage.
After being shown the areas of the theater frequented by the Kabuki troupe, I was then taken up to see the box seats and even allowed to enter the special box seat reserved for imperial personages during performances (which still do take place at various times during the year, I was told -- but not the summer because it's too hot then and this historic venue (still) does not have air-conditioning!). And as I stood in the special box seat silently admiring the view from there, my guide sprang one more surprise on me by telling me that he'd now leave me to move about the theater at will, and that I could and should take all the time in the world that I wanted in order to do so!
Perhaps it was because it was fairly late in the afternoon by the time I got to the Kanamaruza Theatre, but I actually think that it was just me and my guide in there for the majority of the time that I was inside this atmospheric venue!  This made the opportunity to move around by myself in this beautifully preserved playhouse built in 1835 feel all the more special -- as though I had been especially granted private time in this performing arts venue for an art form considered to be one of Japan's three major classical theaters (along with noh and bunraku).
Of course there's a part of me that wishes I could see (and hear) what this Kabuki playhouse would be like when a show was taking place in front of a packed house.  But on such an occasion, I wouldn't have been allowed on and back stage; and this not just because for centuries now, despite Kabuki having been founded by a female, only men have been allowed to perform it!
Posted by YTSL at 11:25 PM

Sounds like you had a physically demanding but rewarding day after your visits to the Konpira-san and then this Kabuki Theatre. In the bottom photo of the Endearing One, I subjectively view her pose as a kind of feministic pride on a runway used by male performers only.

This entry is an interesting look into an "atmospheric venue."

I did indeed have a physically demanding but rewarding day that day! I had hoped to also have fitted in a visit to Zentsu-ji, the 75th temple on Shikoku's 88 temple pilgrimage circuit that's one train stop away from Kotohira, but I ran out of time. In all honesty, I didn't expect the grounds of Konpira-san to be so extensive -- and the Kabuki Theatre was a real delight.

As for "the Endearing One": she looked on the tired towards the end of the day -- even though she was carried for much of the time by me, including all the way up and down Konpira-san's Sando Approach!