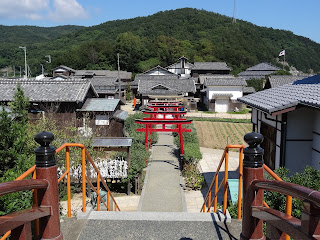 It looks like a real village but it's actually a movie set/village! 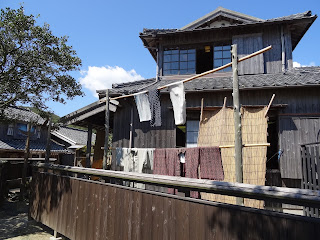 From the outside, this building in the Twenty-Four Eyes
Movie Village appears to be a family dwelling, complete
with washing hanging out to dry under a bright blue sky 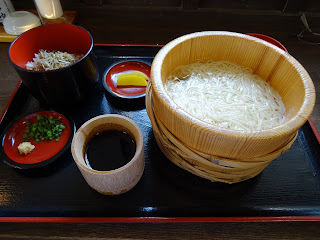 Actually, though, it houses a restaurant where
I had this generous-sized lunch set :b
When most people think of Japanese noodles, they are most likely to think of soba, udon or ramen. Despite it having been enjoyed by the Japanese since as early as the 8th century,
somen -- which is white in color and made from wheat flour like udon but considerably thinner and thus more delicate in texture -- appears to be less well known outside the Land of the Rising Sun.

Among the best tasting dishes I've ever had in Japan was a cold somen dish at an izakaya without an English name or menu where I had dinner one evening last year in Okayama.  So when I read that Shodoshima is home to traditionally hand-rolled somen, I made sure to keep a look out for it when I visited that island in the Seto Inland Sea.

If truth be told, I don't often see somen on the menu in restaurants in Japan and have never seen a somen-ya (even while having seen plenty of soba restaurants, ramen-ya and udon shops).  So when I saw that a lunch set on offer at one of the two restaurants within the Nijushi-no-Hitomi Eigamura (Twenty-Four Eyes Movie Village) consisted of cold somen and an accompanying bowl of rice topped with dried sardines, I immediately knew what I'd be having for lunch that day!

When I was growing up in Malaysia (a country where it's super hot and humid all year round), there was many a time when I found myself sweating heavily while eating a steaming hot bowl of noodles and wondering why I couldn't have a cold noodle dish instead.  So imagine my joy upon discovering the existence of cold noodle dishes in Japanese cuisine -- and for the record, zaru soba was an early favorite Japanese dish of mine that I do indeed particularly like to eat on hot summer days!

In recent years, I've come across and sampled a number of other cold noodle dishes, including Korean naeng myun and Japan's hiyashi chuka.  But while I like them quite a bit, I think my new cold favorite is actually somen -- be it soaked in tangy ponzu sauce (the way I had it in that Okayama izakaya) or dipped in the kind of soy-based sauce that I more usually dip soba into (the way that I ate it in Shodoshima).

In his Sushi and Beyond: What the Japanese Know about Cooking, author Michael Booth wrote about an unusual way to eat somen that I still can't quite believe is real. Nagashi somen (or somen nagashi) involves somen being put into water flowing along the inside of a bamboo pipe (the word gutter has also been used but that makes it sound really unpalatable!) and needing to be "caught" by diners!  I wouldn't mind trying nagashi somen some time -- but to be honest, it sounds too gimmicky, so I'm happy to "settle" for eating somen in more conventional ways whenever I can! :b
Posted by YTSL at 6:43 PM

I have not heard of Somen before and I enjoy Japanese cuisine. Your post is making me hungry :)

I hope that some day soon, you'll get to try somen -- and like it as much as I have done! :b