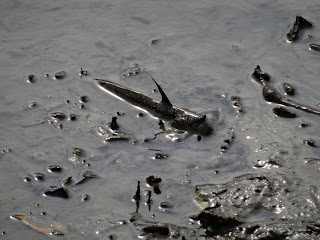 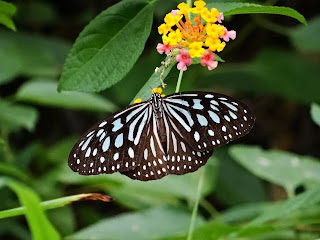 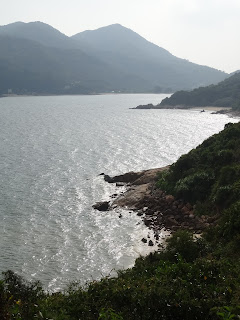 The waters of Chi Ma Wan looked silvery
and solid this afternoon :)
Close to a month after sustaining my toe injury in Japan, I returned to hiking in Hong Kong this week -- with this afternoon's trek taking three friends and I along a mainly coastal route that took us from Pui O to Mui Wo.  With temperatures noticeably more pleasant (as in a few degrees cooler) today than before I left for Japan, it felt easier to move about outdoors.  The downside though, as I lamented to my hiking buddies, was that there appeared to be fewer interesting critters about.
Among other things, it's been months since I spotted a stick insect or skink while out hiking.  And strangely enough, I've not spotted anywhere close to as many snakes this summer as I did last year.  (In fact, if anything, this has been the summer of stick insects and stink bugs rather than snakes as far as the more unusual critters spotted go!)
Still, it wasn't as though this afternoon's Lantau Island hike was entirely bereft of critter spottings.  In particular, I saw lots of butterflies fluttering about and a good amount of dragonflies flying around.  Also, as to be expected of a hike through the Pui O area, feral water buffalo abounded in the area -- and to the extent that today's trail was among the most shit covered I've passed along!  Furthermore, what with our passing by a number of streams as well as walking along a largely coastal route this afternoon, we also did spot a number of water birds, notably egrets, about the place.

And actually, when I looked at the photos I took this afternoon, I was reminded of the mudskippers and crabs I had spotted early on in the hike.  With regards to the unusual looking amphibious fish: While I've of course seen these "fish out of water" before and observed them moving about by using their pectoral fins like legs, I actually hadn't noticed until today that mudskippers have protruding dorsal fines too!
As for the crustaceans: all of those spotted today were on the tiny side and resembled the tiny crabs that the Japanese snack on whole, prompting one of my friends to muse aloud as to whether the ones we spot on our Hong Kong hikes can be eaten in a similar manner!  Also strangely, I can actually remember where -- even if not exactly when -- I made my first crab spotting while out hiking in the Big Lychee!
More specifically, it was deep in the heart of Tai Tam Country Park, along the section of Mount Parker Road leading towards Tai Tam Upper Reservoir!  And while at the time, I wondered whether a flying bird had dropped it there, I have since learnt that crabs make their homes in streams in Hong Kong, including the many hill streams to be found in the territory. ;b
Posted by YTSL at 9:41 PM

Since you didn't mention them, you must not have encountered any stinging insects on this hike. In the spring and early summer, this area was full of bees or wasps ... or bees and wasps. Glad to know they're gone, at least for now.

I have seen crabs in streams along Island Trail near Aberdeen Reservoir. That last saw one a few years ago. It was quite big (its shell is about 10 cm across) with its pincers in orange/reddish colour. That stream was quite dry that day, a bit odd to see a big enough crab.

I actually heard it first as it was making a lot of noise crawling on the dry stream. It disappear very quickly. I could only had a glimpse of it for a few seconds.

I saw one or two bees and wasps along the hike but nothing major -- certainly not anything like the more than 10 nests of stinging insects you came across some time back, thank goodness! Actually, this year, about the one time I was on a path that came close to a nest of buzzing stinging insects was up north on the Pat Sin Leng Nature Trail... so consider yourself warned about that!

Wow, I've not seen a crab that big in the wilds of Hong Kong -- not even in the sea! The ones I've seen have been on the small side, but also mainly orange/reddish in color.