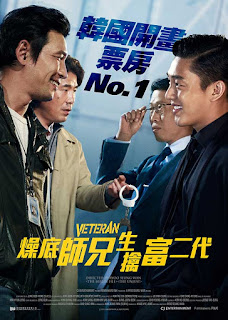 
A couple of evenings before I left on my recent Japan trip, I had the pleasure of attending a preview screening of a South Korean film that went on general release in Hong Kong cinemas today.  Scripted and directed by the helmer of 2013 spy action-drama The Berlin File, it reunites the star and main supporting actor of last year's hit tearjerker, Ode to My Father, and sees them and pretty much everyone involved in the offering pulling out the stops to put together a fabulously exciting show.


Veteran begins with a team of plainclothes detectives going after an international auto theft ring with no small amount of energy and panache.  Much action, fun and comedy ensue during what turns out to be just the lively prelude of an ultra eventful movie whose main event involves veteran cop Seo Do Cheol (Hwang Jung Min) going up against Jo Tae Oh (Yoo An In), the horribly arrogant asshole scion of a powerful chaebol boss (Song Young Chang) that the detective first crosses paths with in a private room of an exclusive nightclub that Seo isn't used to frequenting but Jo most certainly is.


The next time the two men see each other, it's at Jo's corporation's building -- where Seo has gone to find out what had led to an affable truck driver (Jung Woong In) the veteran policeman had met on the job coming perilously close to an untimely end.  Although the cops assigned to investigate the case are inclined to view it as an open-and-shut suicide attempt, Seo learns from the now unconscious and barely alive truck driver's young son (Kim Jae Hyeon) of details that rouses his suspicions and get him thinking a cover-up has been put in place.


With the movie's audience having been witness to the ugly events that had transpired in Jo's office after he had invited the trusting truck driver and his son up there, there's no doubt as to the wrongdoings that have taken place.  Also, along with what had transpired looking to have been designed to hammer home the message that with wealth, comes the kind of power to easily destroy the lives of monetarily less well off innocents, it's patently clear who are the film's good guys and who are the evil guys.


Consequently, much of the intrigue and tension in Veteran comes from seeing how far the bad guys -- specifically, Jo and the slimy Choi (Yu Hae Jin) whose main job appears to be to cover his boss' tracks, usually by paying various people off -- are willing to, and can, go to prevent justice from being served; and what sacrifices Seo and those who support him -- his formidable wife (Jin Kyung), his comrades (including a badass policewoman played by film debut-making singer-model Jang Yoon Ju) and his boss (Oh Dal Su) -- will be asked to make to nail the sort of privileged fellow who usually is allowed to get away with everything, including murder.


Considering the thrust of its main story, it should come as no surprise that Veteran has some emotionally intense scenes.  Less expected though is how director-scriptwriter Ryoo proves adept at throwing in a few moments that get the film's viewer(s) laughing out loud (including early ones involving noodle-eating and later ones involving the recounting of injuries cops get while in the line of duty) that blend well with the rest of the picture rather than stick out like sore thumbs!

This entertaining offering's standout sections also include the action sequences choreographed by Ryoo's long-term collaborator, Jung Doo Hong.  Some of them (including one where a car clearly hits a stuntman rather than a computer-generated creation) made me nostalgic for their 1980s-1990s Hong Kong cinema equivalents while others are inspiredly original, stylishly enacted and splendidly lensed.