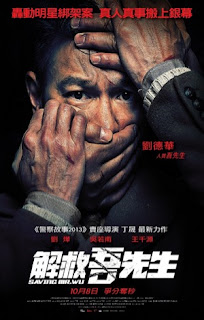 Saving Mr Wu (Mainland China, 2015)
- Ding Sheng, director and scriptwriter
- Starring: Andy Lau, Liu Ye, Wang Qianyuan, Wu Ruofu
The previous time Hong Kong megastar Andy Lau Tak Wah appeared in a mainland Chinese film, he didn't convince as an impoverished mainland peasant mounting a nation-wide search for his son who was abducted 14 years ago in Peng Sanyuan's Lost and Love.  But in Ding Sheng's Saving Mr Wu, he has a role that suits him better -- as a Hong Kong movie star (not much of a stretch there), albeit one who gets kidnapped outside a Beijing nightclub and consequently spends many anxious hours trying to figure out how to increase the odds of his surviving this harrowing situation (something we're going to assume that Andy Lau has not experienced in real life!).

Despite being shackled in real metal chains (because fake ones would break too easily) for much of the film, Lau manages to put in one of his best performances in years.  And despite its top-billed actor being stuck in the same location for the bulk of the movie, Saving Mr Wu actually turns out to be an engrossing watch -- with a story that's full of intrigue and surprises despite it being based on real-life events!

Eleven years ago, Wu Ruofu's abduction outside a Sanlitun bar by men pretending to be cops shocked mainland China.  Initially effectively asked to play himself in this movie, the actor opted instead to take on a supporting part as Cao Gang, one of the senior police detectives tasked with saving the film's Mr Wu along with the likes of the driven, younger Xing Feng (Liu Ye).

Saving Mr Wu begins with the main kidnapper in police custody but the kidnap victim not yet found, and it being uncertain if he's even still alive.  Via flashbacks, the audience is shown how he came to be captured.  Along the way, a vivid portrait is painted of the money-hungry chief criminal as an unscrupulous fellow prepared to do pretty much anything to get money, and there being no guarantee with him in charge that a kidnap victim will be delivered alive after his ransom has been paid.

Although the cocky Zhang Hua (Wang Qinyuan) fancies himself quite the mastermind, he ends up spilling some details during his extended interrogation by the cops -- including there being just a couple of hours or so before Mr Wu and another man (Cai Lu) kidnapped 24 hours earlier are scheduled to be killed.  And even as the cops do their utmost to locate and save him before time runs out, the titular movie star is not just sitting around either.  For despite being physically immobile, he turns out to have an agile mind as well as a strong character who believes that he is capable of changing the fates of not only himself but others.

Made with the support of the Beijing Municipal Public Security Bureau (who, in fact, are among its co-producers!), Saving Mr Wu obviously paints a positive picture of the Beijing police.  But this well-made work doesn't come across as a painfully obvious propaganda piece, in part because it humanizes some of the kidnappers as well as the two kidnap victims chained to each other for much of the movie.  Indeed, I'd even go so far as to opine that it's an involving, entertaining watch, with a number of quality touches (including a quiet montage of early morning scenes that's atmospheric and also interesting in terms of showing a city waking up and getting ready for a new day)!