The latest additions to my ever-growing "...doing what comes naturally" collection... ;) 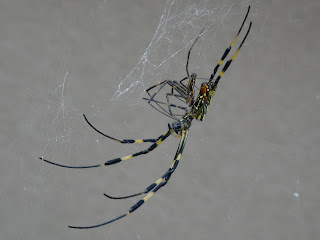 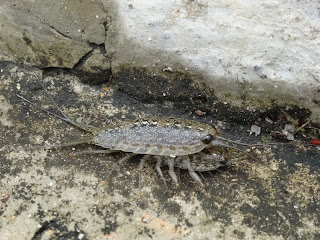 The same act, this time performed by a pair of sea slaters!


Among certain circles of my acquaintances and friends, my blog is particularly known for its bug s*x pics.  This is not least because over the course of my hiking in Hong Kong, I've come across, photographed and subsequently put up the photos I've taken of a variety of critters doing what comes, well, naturally to them at certain times of the year!

It all started with my spotting a pair of colorful moths lying atop a railing along a trail near Hoi Ha more than six years ago now.  The first thing I noticed about them was that their bodies as well as wings were polka dotted.  The second thing I noticed about them was that they were lying incredibly still.  When I wondered aloud if they were dead, my hiking companion that day (who happened to be my mother) immediately corrected me and pointed out that they were, in fact, in the process of procreating!

Since then, I've come across many other pairs of butterflies and moths engaged in the same act.  In all honesty, it's been interesting to see how certain insects (such as the grasshoppers I memorably spotted going at it up on Victoria Peak, and beetles) do it "doggy style" but many others (for example, stink bugs) don't; with the prize for most amazingly acrobatic position when procreating (insect division) going to the lovely dragonflies (which may well be my favorite s*x pic subjects because they do stay so very still when coupled, thereby allowing me to snap to my heart's content and come up with way clearer and more close-up photos of them than I normally would be able to do so)!


Over the years, the critters I've captured on camera doing what comes naturally have gone beyond the insect kingdom to include such as tortoises.  And my chance encounters with amorous critters have gone beyond Hong Kong's shores to include frogs going at it in full view at an aquarium in Okinawa and spotting a pair of amorous beetles on the side of the path leading up to a lookout point in Shirakawa-go!

In recent months, I've spotted still other pairs of critters going at it in places where one might not expect to see them at all.  On a seaside path on Cheung Chau, over here in Hong Kong, a pair of sea slaters risked being stepped on by various human passerbys because, it seemed, they just couldn't wait any longer to do what they were so intent on doing!  And while making my way to Kotohira's Kanamaruza Theatre on my most recent Japan trip (which saw me setting foot for the first time on the islands of Shikoku and Shodoshima), I caught my first ever sight of a pair of spiders doing their part to propagate their species! ;O
Posted by YTSL at 11:55 PM

Thanks. I'm glad the shots I took turned out pretty clear. :)

You really captured some intimate moments in the lives of these insects. There is a certain natural endearing quality about them that I would label as "personal choreography."

I like your "personal choreography" label" and may use it the next time I offer up snaps of creatures being "intimate"! ;b