At the risk of sounding sacrilegious, there were greater highlights to the day that I visited Izumo Taisha than my actual visit to one of Shinto's most sacred shrines.  More specifically, they came after I took a scenic ride along a bus from near Izumo Taisha approximately 8 kilometers out of town to Cape Hinomisaki, a picturesque part of Izumo Province that's home to another large shrine (this one vermillion-lacquered), a smaller shrine on a sacred island with hundreds (if not thousands) of seagulls, and a lighthouse that is Japan's -- and maybe even Asia's -- tallest.

However weird it may sound, I had actually thought prior to getting there that the lighthouse was part of the shrine complex -- and hadn't realize that it was as tall as 43.65 meters (over 143 feet).  At least, I did figure correctly that the coast around it would be beautiful -- and was happy that I had time not only to view the scenery from the top of Hinomisaki Lighthouse (the first lighthouse I've climbed up in my life!) but also the nearby park (which, rather surprisingly, has very little fencing or such despite its path being very close to the cliff edge at times!):- 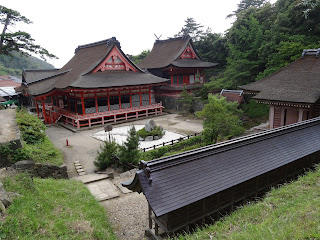 Although Hinomisaki-jinja was the first sight I saw upon getting off
the bus at Cape Hinomisaki, I actually only explored its grounds
after I had first been up to Hinomisaki Lighthouse and its environs 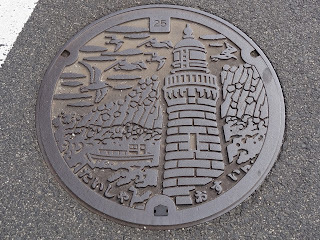 Upon viewing the manhole cover I saw at Cape Hinomisaki,
I think it's safe to surmise that the area is indeed
most famed for its lighthouse, and seagulls ;) 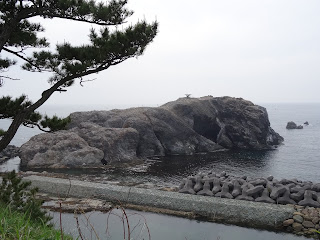 The sounds of seagulls draw one's attention to Fumishima 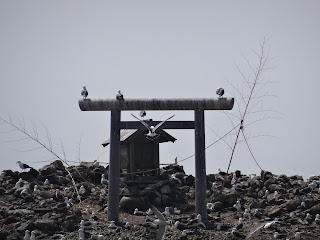 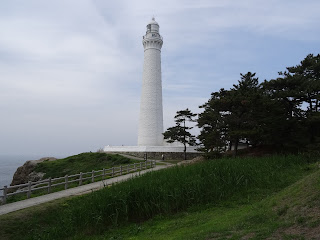 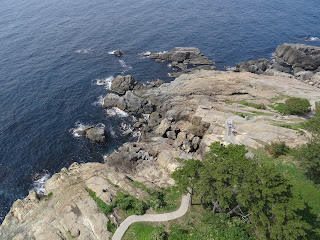 From the top of the lighthouse, I also got this view and
upon spying the path, decided that I had to walk along it! :) 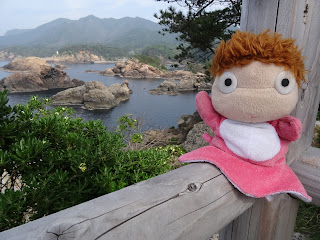 The path led to an observation point where I took this photo of
Puppet Ponyo that may well be my favorite from this Japan vacation :) 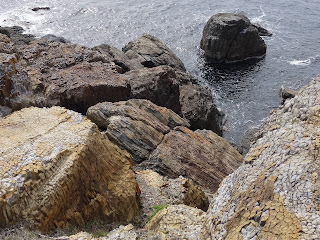 This last shot is for those of us who can get impressed by rocks :)
Posted by YTSL at 5:54 PM

In one of your best-ever travel blogs you depict the variety of things you can see on a day excursion in Japan. You've got a wooden temple, rocks, a lighthouse, and birds...And the photo of Puppet Ponyo beaming with charm from the "observation point", is good enough to be called archetypal.

I'm glad you like this particular blog post. I loved that Cape Hinomisaki was so unexpectedly wonderful for many reasons -- and am glad that I got a Puppet Ponyo photo that I really like to commemorate my visit to that area! :)