KFC and more at the Hong Kong Island branch of Chicken Hof & Soju! 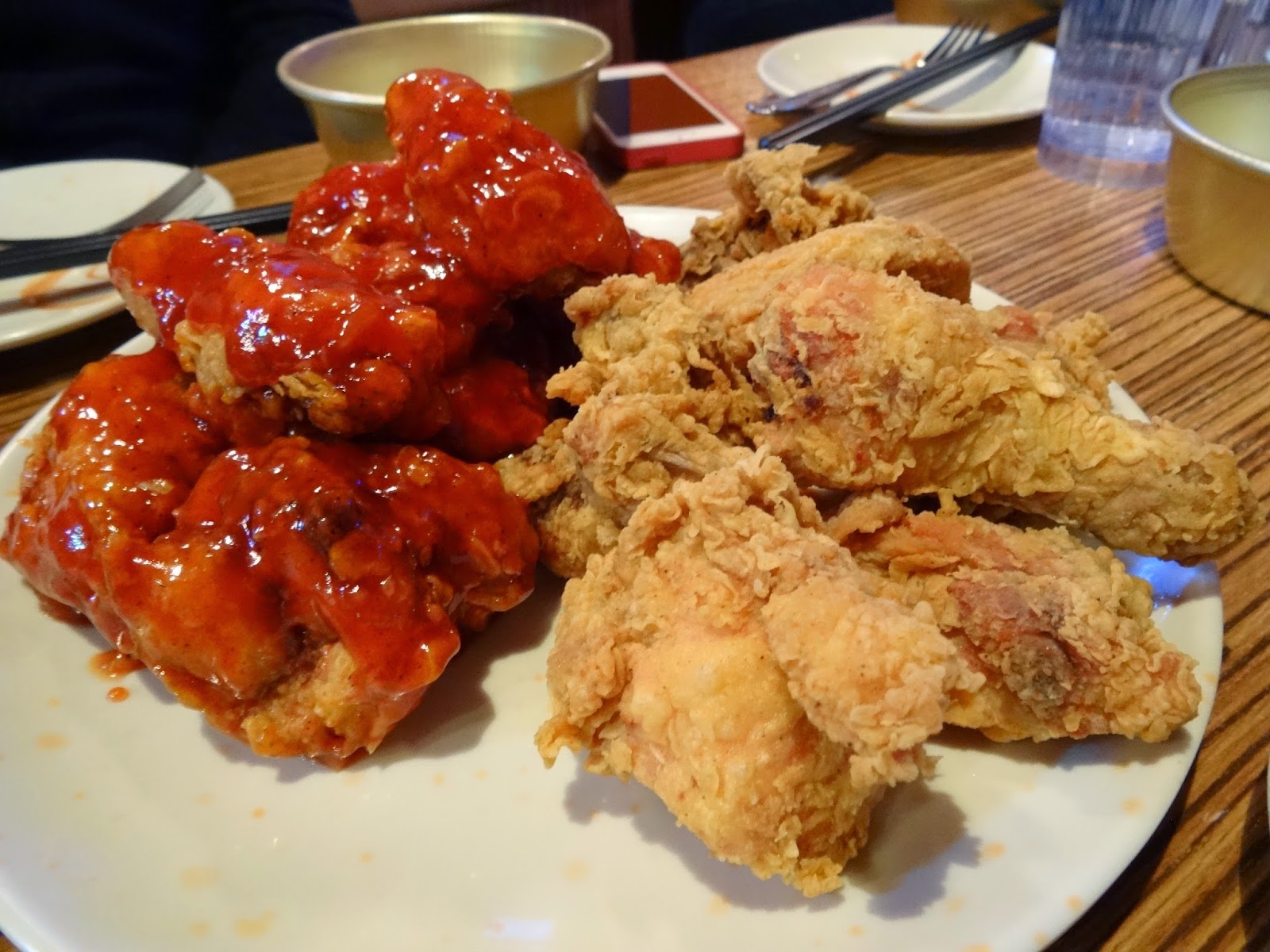 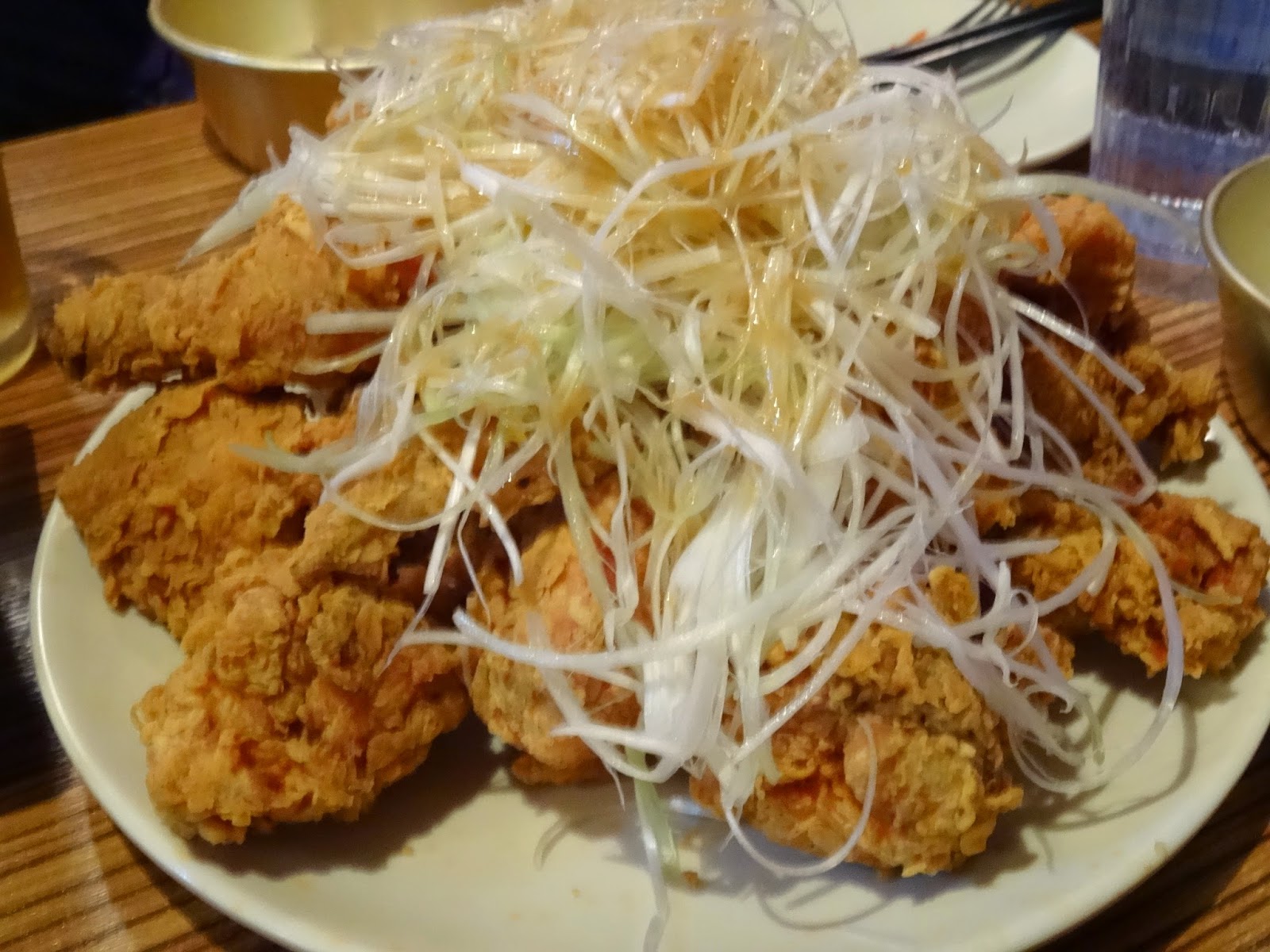 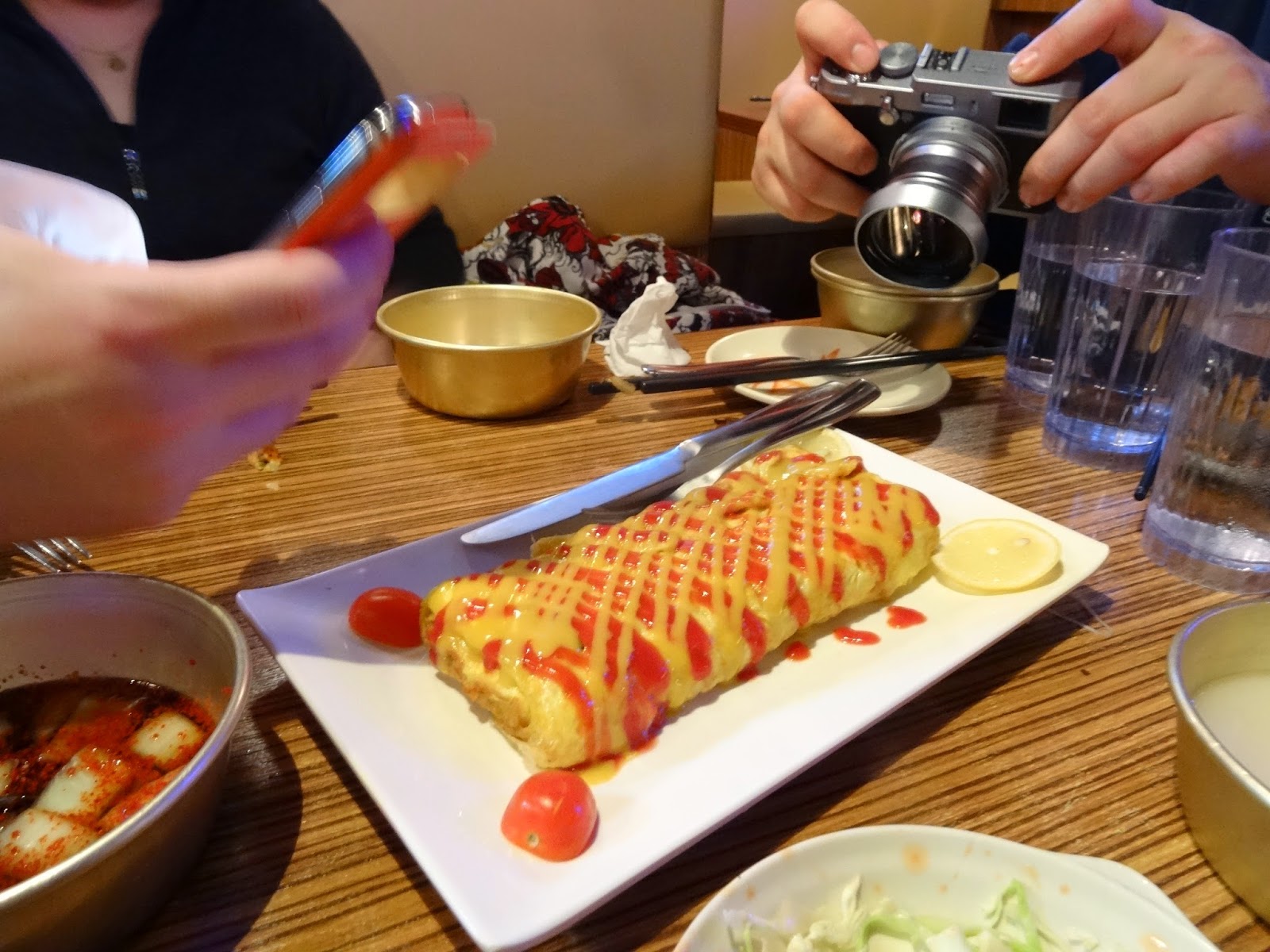 What happens when eating with foodies -- the food
(in this case, a beautiful cheese egg roll) has to be
photographed before it can be cut up and consumed! ;b

Earlier today, I went on my second hike in four days -- and this despite the visibility being on the low side (as in I couldn't see the Kowloon Hills from the Central Piers) and the weather being on the muggy side (and rain pouring down while I was having my post-hike dinner).  Some people might think this excessive but I felt a need to get in some more calorie-burning exercise this afternoon on account of my having pigged out quite a bit in the first few days of this Chinese New Year of the Goat/Sheep/Ram!

As an example, on the second day of this Chinese New Year, five friends and I went for a Korean fried chicken-heavy feast at the Hong Kong Island branch of the ultra popular dining and drinking establishment known both as Lee's Family Chicken and Chicken Hof & Soju. (For the record, on the front of the restaurant, "Lee Family" is written in Korean and Chinese characters (but not English), and "Chicken Hof & Soju" in English (but not Korean or Chinese)!).


After twice trying -- but just not being patient enough to wait for hours -- to get into its original Tsim Sha Tsui branch, I was really excited to discover a few months back that the Hong Kong Island of Chicken Hof & Soju (as I'll henceforth refer to it in this blog post) takes reservations.  However, when one of my friends tried to make a dinner booking for the second day of Chinese New Year, he was told that this wouldn't be allowed -- because the restaurant doesn't take reservations on Friday nights!  Still, rather than give up on our Korean fried chicken Chinese New Year feast plans, we just decided to eat early to beat the crowd -- and were happy to find that we could walk straight into the place when we got there a little before 6pm!


The previous times I've eaten Korean fried chicken (including in South Korea with my mom, and at Fairyland with my mom and a friend), there weren't so many people in our party.  So I was really looking forward to trying a greater variety of KFC -- and I don't mean the fried chicken made according to a certain Kentucky colonel's recipe -- this time around!


Although I would have happily continued the Korean chicken odyssey (in particular, I'd love to try to the cheese hot sauce chicken and rice cake dish that's also on the menu of Chicken Hof & Soju at some point), the majority of the group appeared chickened out after this.  So while we did order more dishes, they were all of the non-chicken variety -- and happily, they all were pretty good!

Actually, the very first dish we ordered that evening at Chicken Hof & Soju was some dried squid -- tougher than the Chinese and Japanese versions I've had, but good to chew on while waiting for everyone in our party to arrive.  Then after the chicken dishes, we went ahead and ordered a Korean kimchee pancake (that, when it came, we decided seemed more like pizza than any pancake we knew!), a soft egg tofu concoction (that tasted far better than it sounds and looks!), and a cheese egg roll (that seemed like a super thick egg omelette with a thin layer of cheese inside it)!


While I'd never go to Chicken Hof & Soju just to eat the non-chicken dishes, they weren't too bad at all -- especially compared to the salad that two friends and I had ordered on a previous visit and never ever will again.  In particular, I liked the kimchee pancake a lot -- and thought it really tasty when drizzled with the tangy sauce that came with it.

Also going well with all of the food was some alcohol -- of course!  While others in my party opted for maekgolli, I stuck to beer -- specifically, draft Asahi.  With advance apologies to fans of Korean alcohol: I don't think South Korean beer is as good as Japanese beer. And after trying maekgolli twice now, I still have not got a taste for what seems to me like an alcoholic cross between yoghurt and sour rice liquid!  Indeed, the two sips of maekgolli that I had were easily the worst part of the otherwise very enjoyable meal as far as I was concerned! ;b
Posted by YTSL at 11:05 PM

Hi YTSL -- I don't think we "chickened" out! We were interested in trying out the other dishes and I'm glad we did so we know what to order next time!

I don't 't think we "chickened" out but, rather, seemed to not want to eat any more chicken -- as can be witnessed by the other dishes we ordered after the two chicken dishes being non chicken ones!

Whoa that was really an effort to get the chicken meal!

I wonder do they fry with or without the skin.......... I have to admit, with the skin (and the fats below) it would be more tasty but not too good to our health. But if chickens are concerning, it would be a pity if we do not consume the skin (especially something like soy sauce chicken). I'd rather eat less chicken altogether.

They fry with skin. And yes, I think it'd be a waste and shame to not eat the skin since that's a really tasty part. Also, yes, I rather eat less chicken generally than eat skin-less chicken! ;b