Dinner at an izakaya without an English name and menu 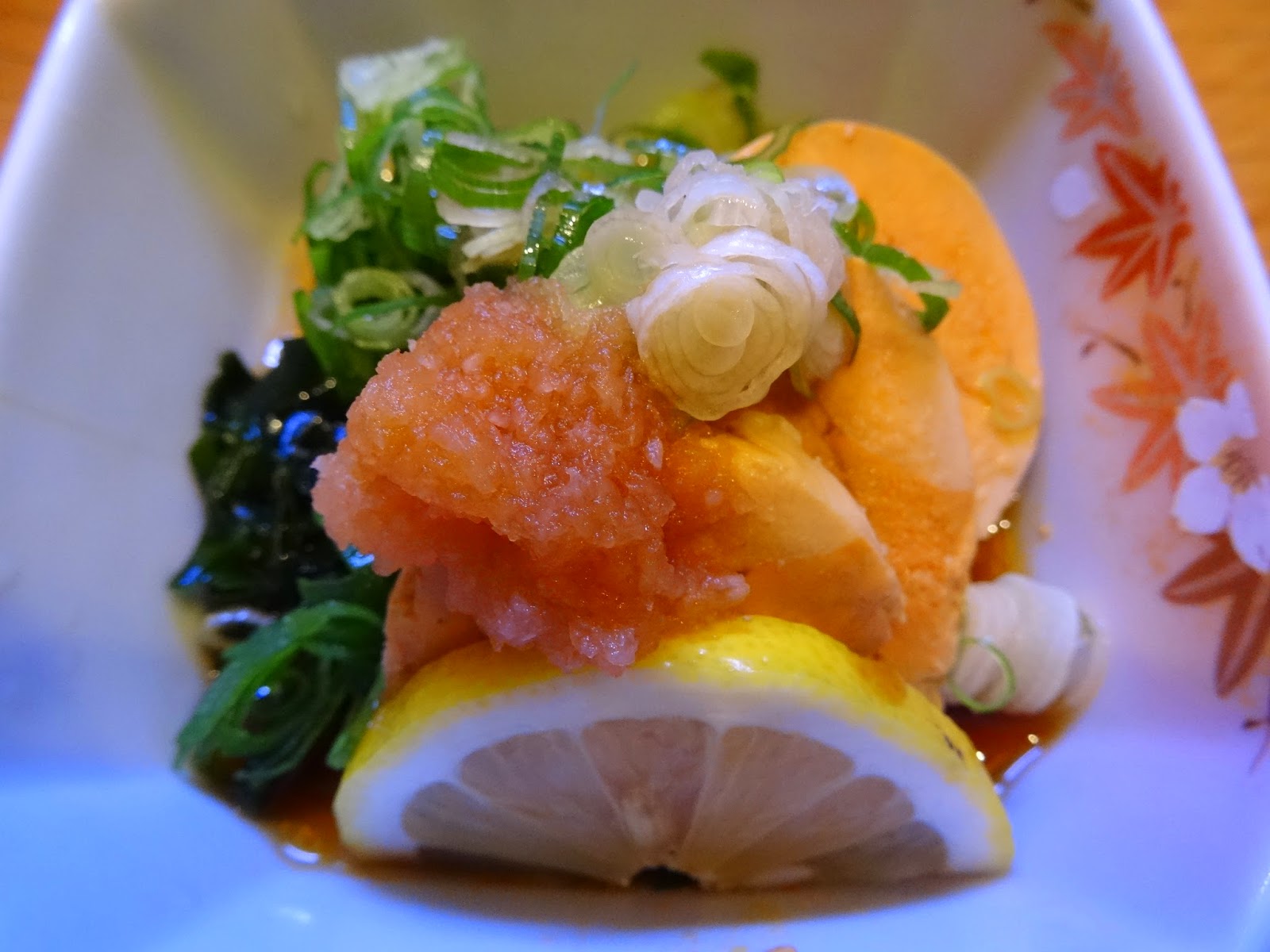 The most delicious liver ever may well be ankimo
(monkfish liver) served in the traditional Japanese style! 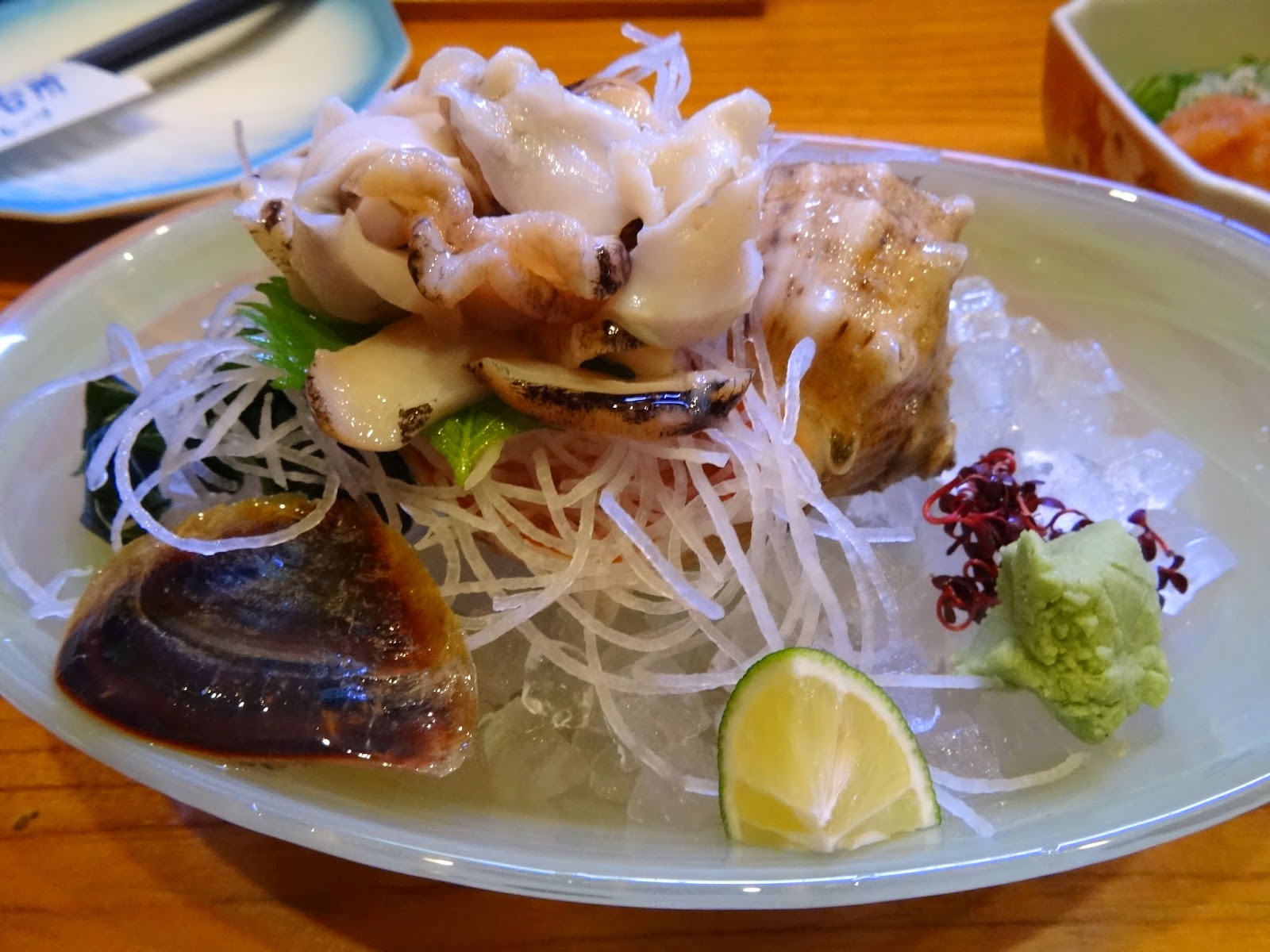 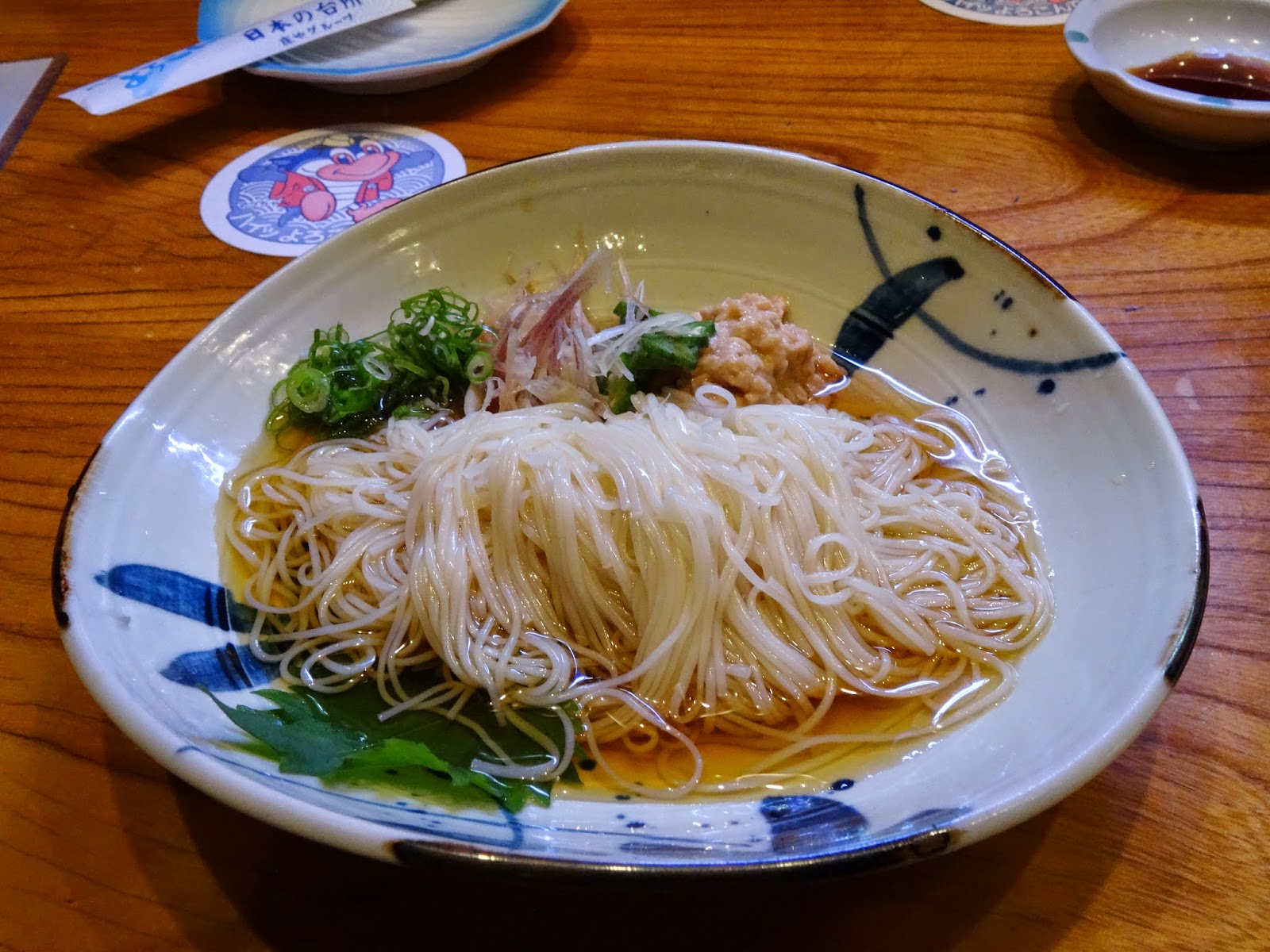 A small but delicious plate of assorted tempura

After going on a 17 kilometer bike ride on the Kibi Plain earlier in the day and sampling some craft beers at a Furashiki microbrewery, I figured I needed to top my birthday last year off with a nice dinner.  Although I was tempted to head back to the Kurashiki izakaya where I had a pretty good dinner the night before, I elected to try some place different -- and after heading back to Okayama, I walked around an area near my hotel there that looked to have a variety of dining establishments about before deciding to go into an izakaya with no English name and no English menu.

More than one person has asked me how I manage to get around in Japan -- and do such as have the variety of food that I do -- despite not being fluent in Japanese.  My reply often is that there's more English -- and people who understand some modicum of English -- in Japan than many people who have never visited the Land of the Rising Sun may realize.  But it's also true that the further one goes away from the larger cities like Tokyo and Osaka, the more likely it is that one is going to have to use some Japanese -- along with sign language! -- to communicate.

One Japanese word I find wonderful to know is "sumimasen".  It can mean "please" (as in when you wish to draw the attention of a waiter or waitress) as well as "excuse me" (useful when you wish to do such as get people to make space for when you want to get out of a train).  Another useful word -- particularly in restaurant settings -- is "moriawase" (which means assorted).

In Japan, many restaurants specialise in only one type of food -- say, yakitori, sushi or tempura.  If you're willing to take a chance, when you go into those kinds of restaurant and don't have the vocabulary to specifically order what you want, say to the person taking your order "moriawase, kudasai" (assorted, please -- and yes, kudasai is another Japanese word for "please").

Izakaya, on the other hand, are Japanese dining (and drinking) establishments which have a variety of foods on offer.  I've come across some izakaya with English on their menus.  More often, I've come across izakaya with wonderful picture menus!  And such was the case for the Okayama izakaya which proved to be a great place to have my birthday dinner!!

As it so happens though, I actually knew how to order everything I had there (i.e., the dishes pictured above) in Japanese -- this as a result of my having eaten thousands of Japanese meals over the years (and my making a point to try to remember the names of dishes and ingredients that I liked and figured I'd want to order and eat again in the future)!

And, of course, I also knew how to order in Japanese what I wanted to drink that evening: a big glass of draft beer (nama biru - dai!) and a smaller glass of nihonshu (what sake is known as in Japan) -- with my feeling particularly chuffed to discover that Dassai 50 Junmai Daiginjo was on the menu there, as it is at Senryo and Sake Bar Ginn over here in Hong Kong.

As luck would have it, midway through my meal, a Japanese salaryman came into the restaurant and opted, like I had, to sit at the counter.  Tickled to see him order the same sake as me and also the ankimo, I told him "good choice" -- and that's how we got to talking.  At first, he told me he didn't know much English but, as often is the case with Japanese people, the more he drank, the more English language ability he was able to exhibit!

Thus it was that my birthday dinner turned out to have all the key ingredients for a memorable meal -- delicious food, enjoyable drinks, and friendly company to chat and joke with! ;b
Posted by YTSL at 8:10 PM

Enjoyed this colorful and informative post that explored your adventurous dining in a country, without speaking the language. (Well, food is a kind of universal language.)...Since I like seafood, the Tsubugai (whelk) Sashimi looksB especially inviting. Obviously, this was a meal worth photographing and remembering.

To me, food is cultural more than a language... which helps explain why certain peoples, notably the Japanese, can get inordinately happy when they find out you love the food associated with their country!

I think whelk is an often under-rated food item in places like Britain and the US. BTW, last night, I had whelk cooked in butter with scallops and asparagus -- mmmmm, good! :)

Great photos of what looks like and you said to be delicious food. The only place in the US I've had whelk or sea snails as it's called here was in a local Portuguese bar on Cape Cod and only regular customers were told about it. Cooked in butter & garlic with linguisa (spicy Portuguese sausage)....yummy.

I like whelk cooked in butter -- but I love it best eaten as sashimi, dipped in ponzu or soy sauce! :)