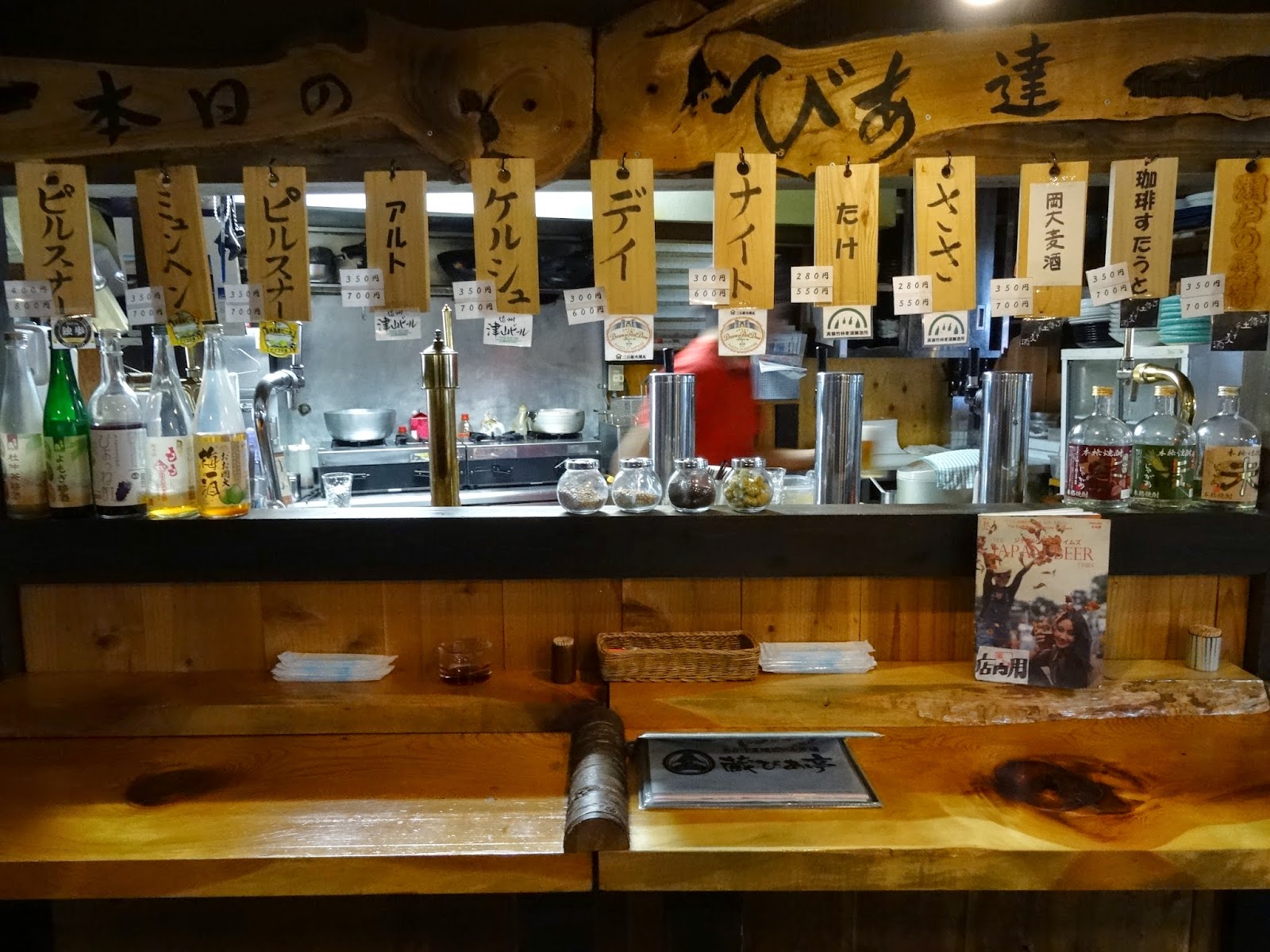 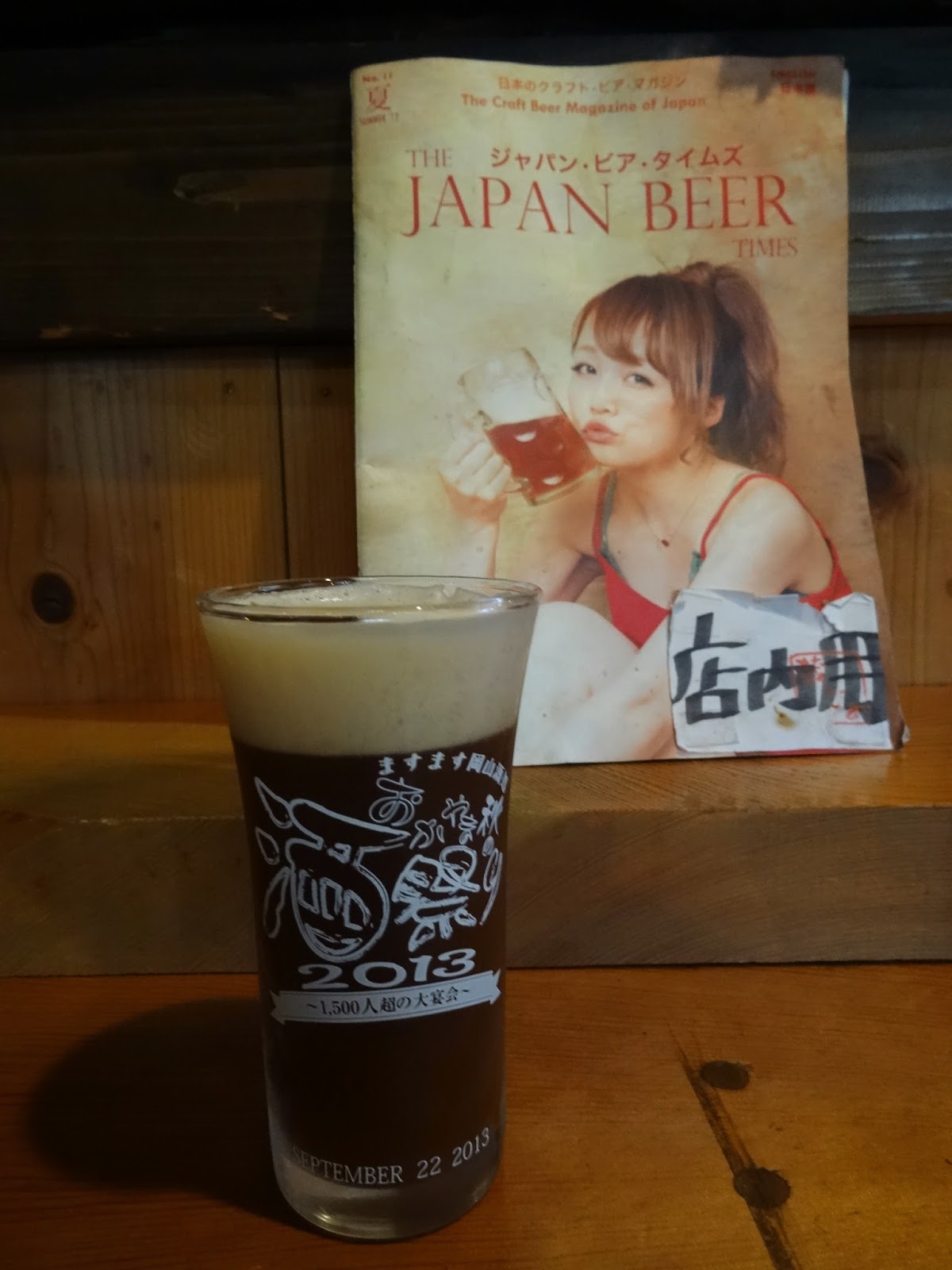 I ended up settling down there to have a couple of (small) glasses
of beer and a read of copies of the bilingual Japan Beer Times :b

Even without going on a 17-kilometer-long bicycle ride, I often already am thirsting to have some nama biru (draft beer) when I'm in Japan.  But after completing my Kibi Plain bike excursion, I had a specific place in mind to go slake my thirst -- the bar of a microbrewery in nearby Kurashiki which had been closed when I visited that town the previous day but I knew was open on the other days of the week!

Upon entering the premises of Kurashiki Mugishukan, I found more than I bargained for.  On the negative side, it happened to be one of those places in Japan without an English menu or anyone on the premises who was comfortable speaking English.  More happily however, I discovered that the microbrewery had plenty of beers on tap, including those from other microbreweries in the region.  Also, that even while the bartender (who happened to be the only other person around pretty much the whole time that I was there) couldn't speak English, he still could identify and state different beer styles such as "pilsner", "IPA" and "bock"!


The first beer that I tried was a German style brownish looking house beer from the microbrewery.  The second was another German style brown beer known as Tsuyama Draft from Okayama's Tago Brewery Company.  If truth be told though, neither of these craft beers were particularly memorable and all that successful at quenching my thirst -- this not least since they were served in glasses that were on the small and also expensive side!


Funnily enough, probably the highlight of my visit to Kurashiki Mugishukan was coming across copies of the Japan Beer Times there.  Although certain of the copies had cover pictures that got me thinking I definitely was not a member of the publication's target audience, I still did enjoy reading many of its articles -- and ended up going through every single one of the eight or so different copies of the publication that were lying about in the bar area!

I think it can be safely said that the big four breweries of Asahi, Kirin, Sapporo and Suntory still rule for the most part in Japan.  At the same time though, I've tasted my share of enjoyable Japanese microbrews in Japan and also Hong Kong (including the beers of Kagua and Hitachino). And even while I have to admit to being very happy to drink the nama biru of the big four in Japan -- which, it has to be said, does taste quite a bit better when imbibed within their home country -- I did come away from my visit to Kurashiki Mugishukan determined to sample even more Japanese craft beers when the chances presented themselves! ;b

I passed by this place everyday during my stay at Kurashiki, and kept wondering what's inside. While I'm not a huge fan of Japanese beer (sounds like neither are you!), this does seem like a neat little place to sample the microbrewing scene in West Japan!

Actually, I've found a few Japanese beers that I really, really like -- including those from Minoh Beer:-
http://webs-of-significance.blogspot.hk/2015/03/in-beer-geek-heaven-at-minoh-beer.html

But it's true enough that I loved that craft beer bar in Kurashiki far more for its atmosphere than its beers on offer at the time I was there. ;b