There they go again! 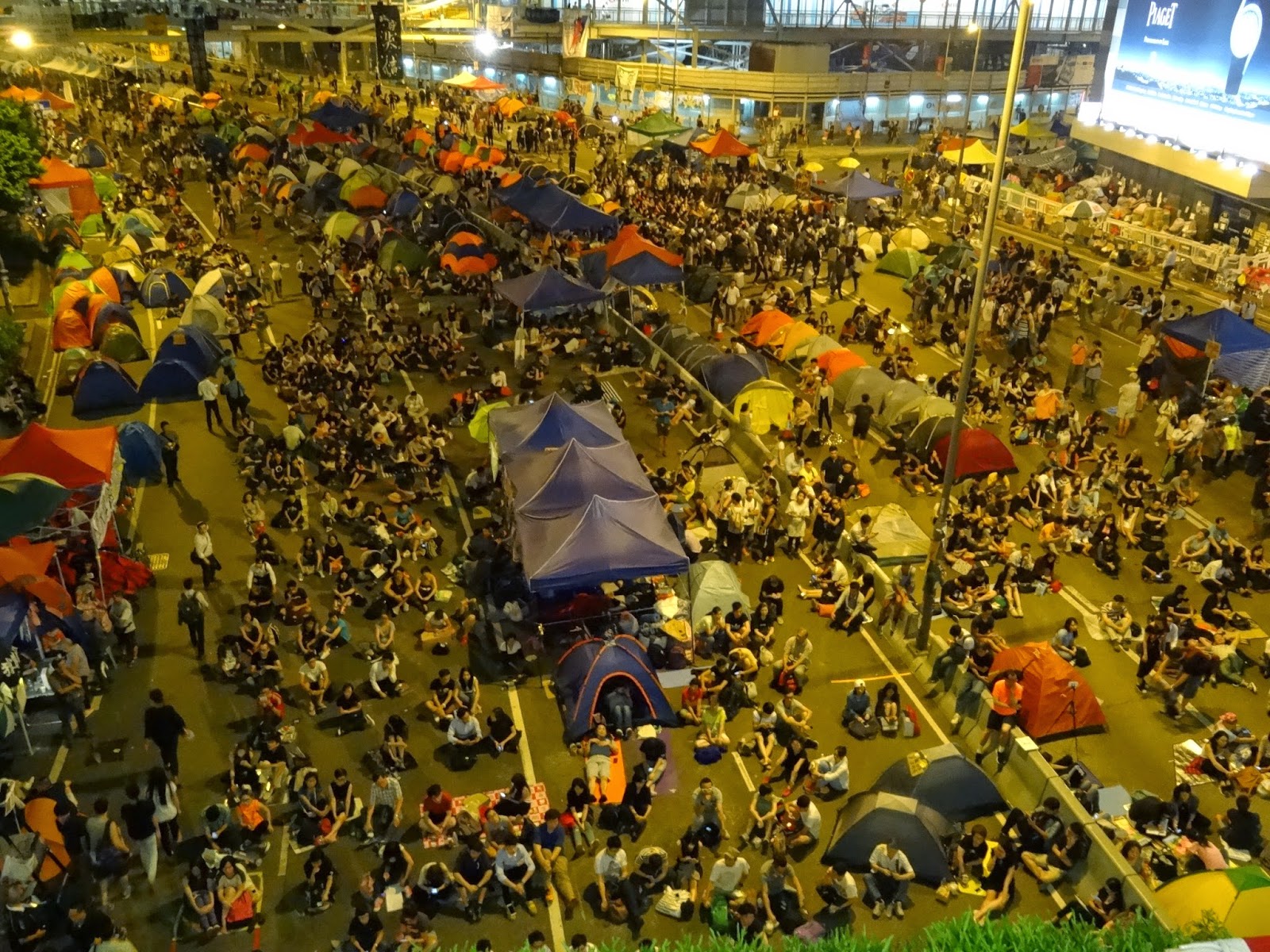 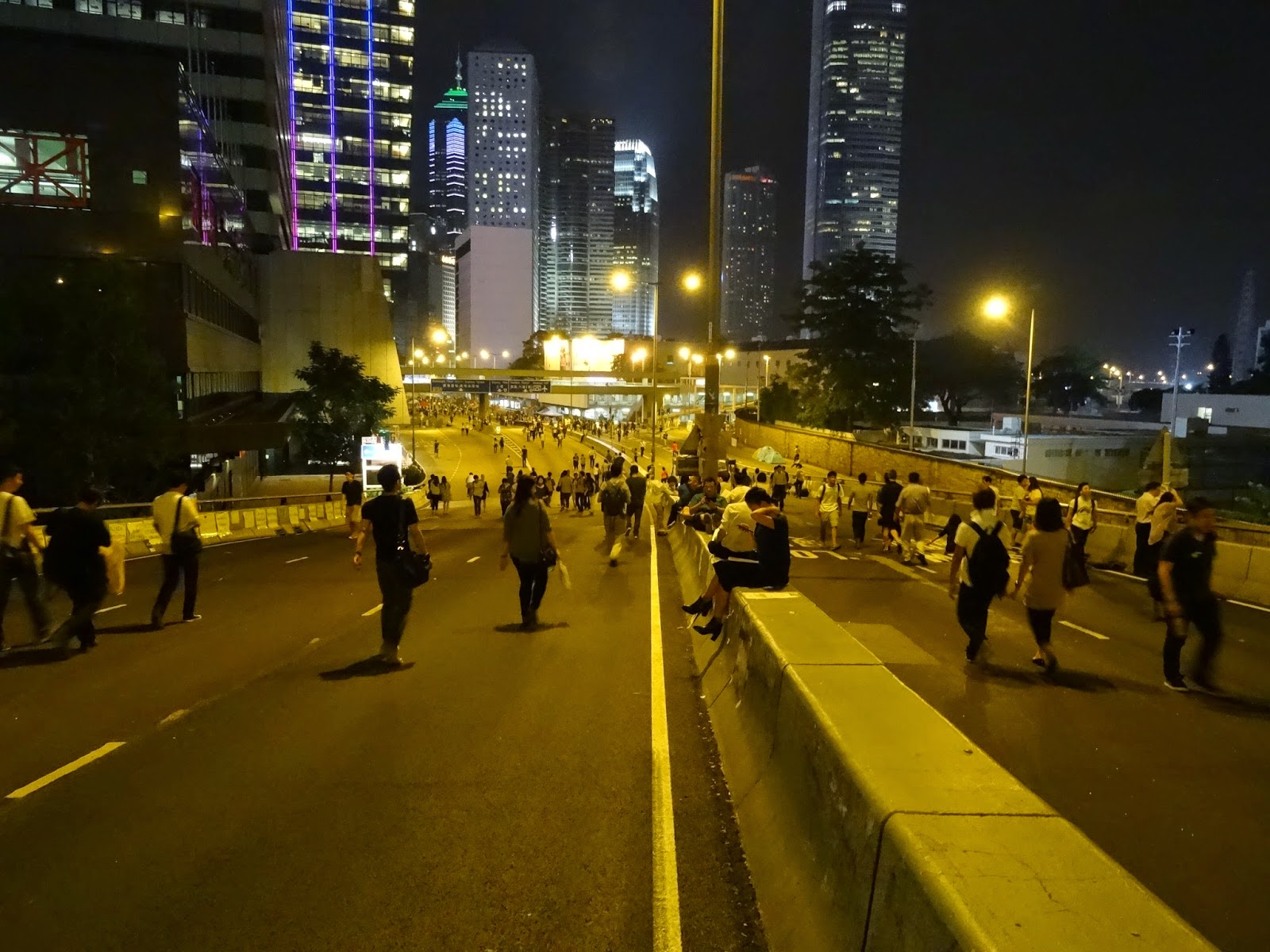 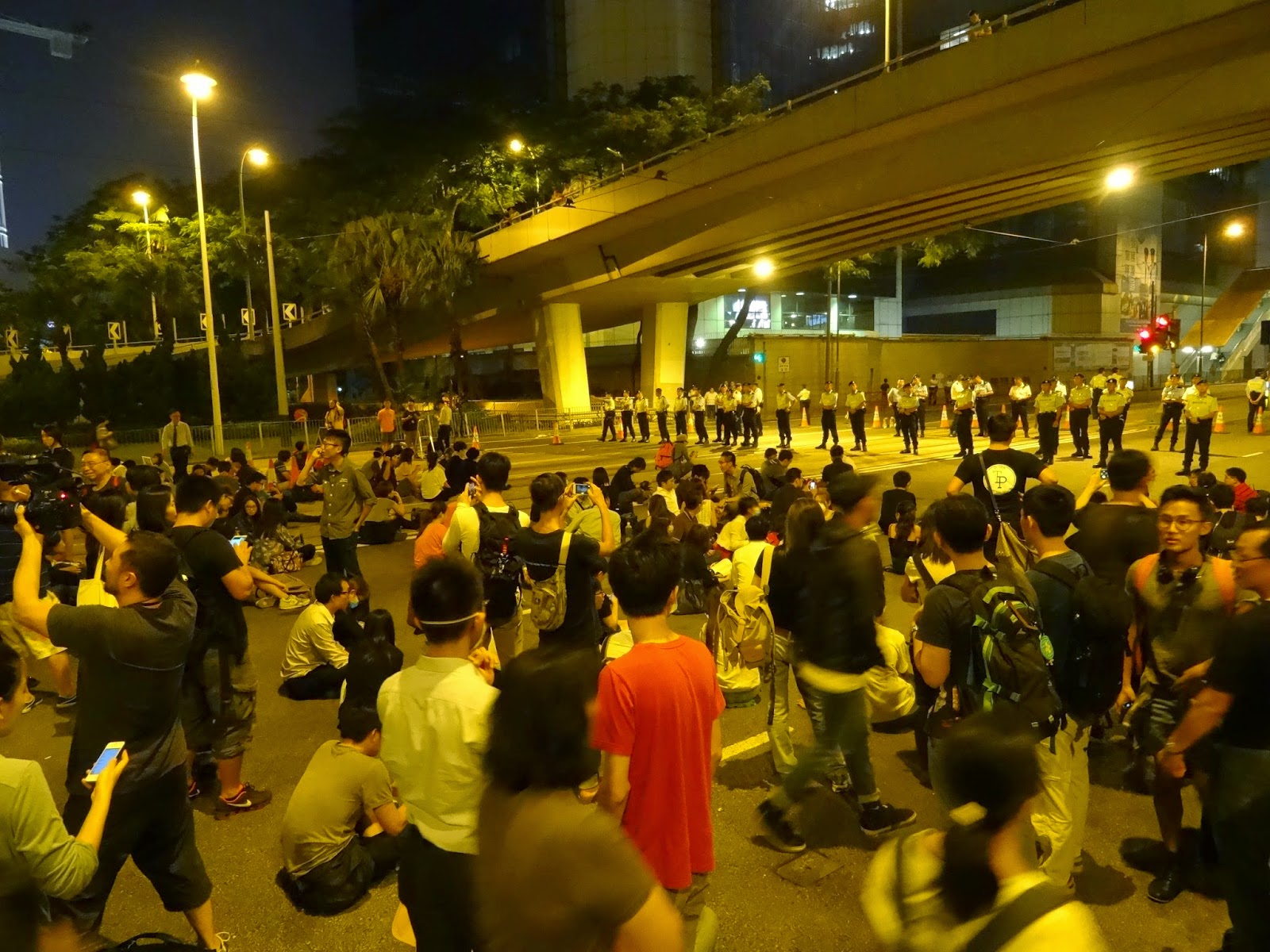 On Queensway, near the Bank of China, plenty of people
occupy space a few feet away from the assembled rank of police

This morning before I went off to work, I got news that the police had gone about removing barricades at Admiralty, including near the Bank of China Tower, and Mongkok -- and justified their doing so by stating that no protests were going on in those particular areas.  Just hours after I had seen a sizable crowd at Admiralty the night before, it seemed that the numbers had shrunk quite a bit -- as protesters headed off to work and school, or back home to catch some shut eye after not particularly sleep-filled nights sleeping out on the streets.


The trepidation I felt upon learning of this news increased exponentially a few hours later after getting word that groups of masked anti-occupy men had entered the protest areas and launched attacks on Umbrella Movement participants there. While the police said they had cleared the barricades to allow traffic to move, it seemed that their actions also had opened up the way for anti-occupy thugs -- who reportedly spoke other Chinese dialects or heavily accented Cantonese -- to invade.  (Was this just a coincidence?  You be the judge...)

For the record: the police reportedly formed a human barrier between the anti-occupy group and the Umbrella Movement participants later on in the day.  And Umbrella Movement members managed to re-erect and/or reinforce a number of barricades.  All this while I was  in an office several miles away from any Occupy site trying to get work done and not get too distracted or distraught by events taking place in another part of Hong Kong.

Despite at least one friend warning that Admiralty would be a dangerous place to be this evening, I felt compelled to head there after dinner -- and that's what I proceeded to do along with the blogger behind The Fragrant Harbour.  Approaching the occupy site from the western side, I was saddened to see that the area had shrunk -- with such as the road in front of the Mandarin Oriental Hotel now being open to cars.


But a few meters inside the noticeably smaller protest area, we started seeing protesters -- including in areas which previously people hadn't been sitting in/along -- and my heart swelled as it soon became patently clear that the crowd had returned to the protest areas with a vengeance!  While just a few minutes before, I had felt downcast, now I wanted to cry with relief and pride upon witnessing anew that the Umbrella Movement has showed once more that adversity only seems to strengthen its participants.


Wandering about in Admiralty's central protest area, I noticed not only that many people had once again showed up to give their support but also that new pieces of art and messages had sprung up -- many of them beautiful and others showing that a number of Umbrella Movement members still have their sense of humor intact!  Even better, a fair few protestors had taken it upon themselves to physically occupy the sections of the protest area (e.g., Queensway) that the police had said, not without reason, were not actually filled with protestors -- and, as I witnessed, drive away those now overwhelmingly outnumbered anti-occupy troublemakers who had sought to venture into the area this evening!!

Thus it is that it seems that all sides involved have done it again.  Specifically, the police have threatened to end the protests, anti-occupy groups have shown that they are more prone to violence and seem less at home in Hong Kong than the protestors, and members of the Umbrella Movement have shown that they are not going to be going easily -- not least because they believe that they are fighting for a just cause, and to ensure that Hong Kong has a future that people can believe in.
Posted by YTSL at 11:59 PM