One afternoon in "Occupied" Mongkok (Photo-essay)

Yesterday evening, I had a discussion with an expat friend about the current situation that I found rather disquieting.  One of those who had professed to support the students the first week that the ongoing pro-democracy protests began, she now says that she's "neutral" on the matter -- in that even while she (now) thinks that 689 is a leader who seems thoroughly incompetent, she also wants "the students" to stop Occupying and have things get back to normal.

As she talked, it became obvious that a major reason for her opposing the Umbrella Movement was economic, with her telling me that one good friend's business has suffered quite a bit as a result of the protests and at least two of her friends who worked in luxury retail and catering in Causeway Bay have lost their jobs in recent weeks.  In response, I wondered whether with the latter, some businesses are using the protests as an excuse for a lack of business -- as it's a fact that stores catering to mainlanders have seen lowered sales in recent months because of Xi Jinping's anti-corruption campaign.  (For evidence, check out this interesting article written on September 24, days before Occupy Hong Kong began.)

An even more frustrating part of our discussion was when my friend stated her belief that the protesters is pretty much entirely composed of "students", and that they have knives and other weapons with which they use to attack the police.  Determined to prove her wrong, I headed over to Mongkok this afternoon to get visual evidence of what the most volatile thus far of Occupy Hong Kong's three protest areas actually regularly looks like.  (As another friend of mine -- one who spends a lot of time there -- told me re the media coverage of Occupy Mongkok: "All they show is the exciting part. 23.9 hours of sleeping, recycling, and homework goes missing"...) 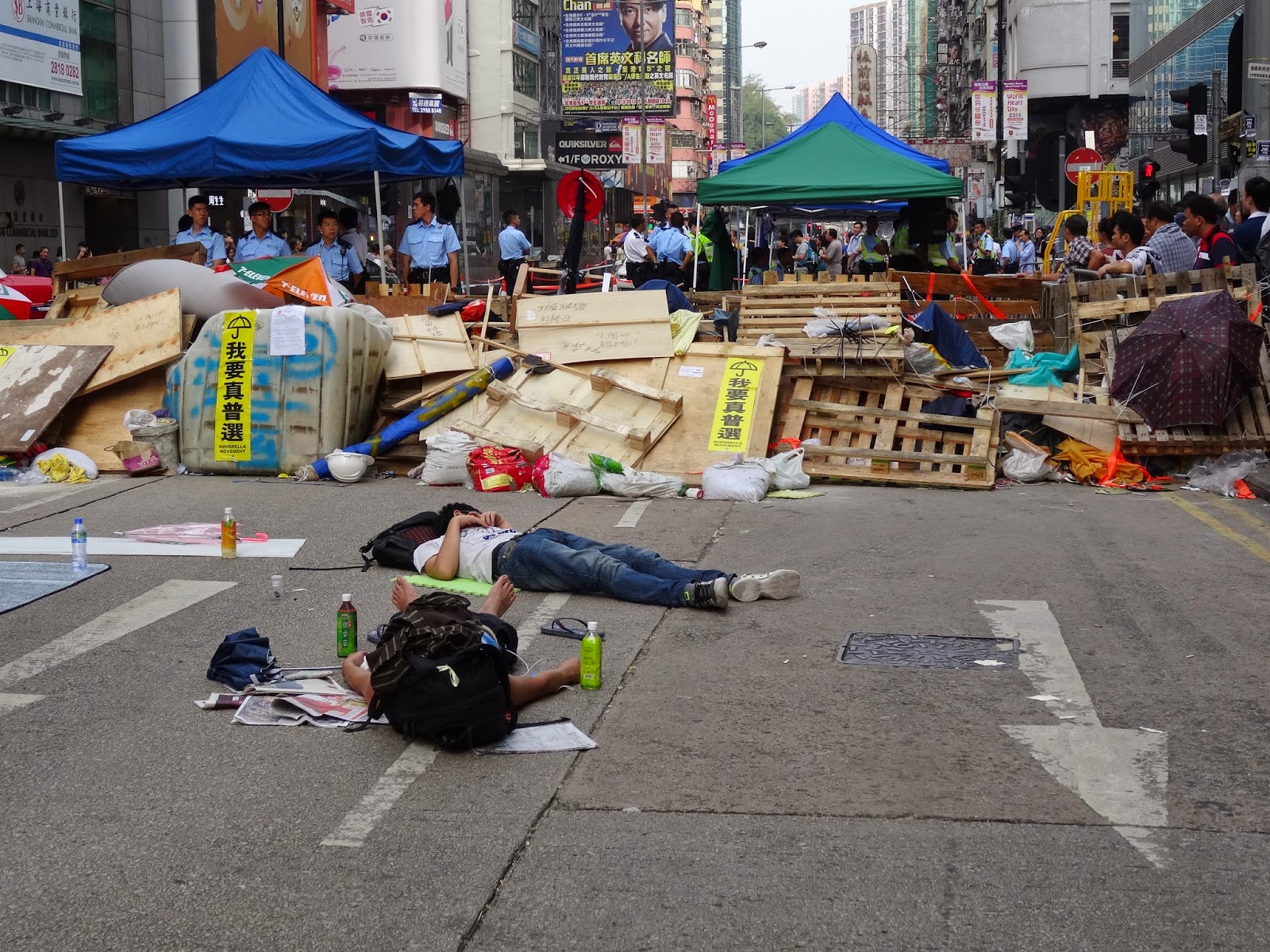 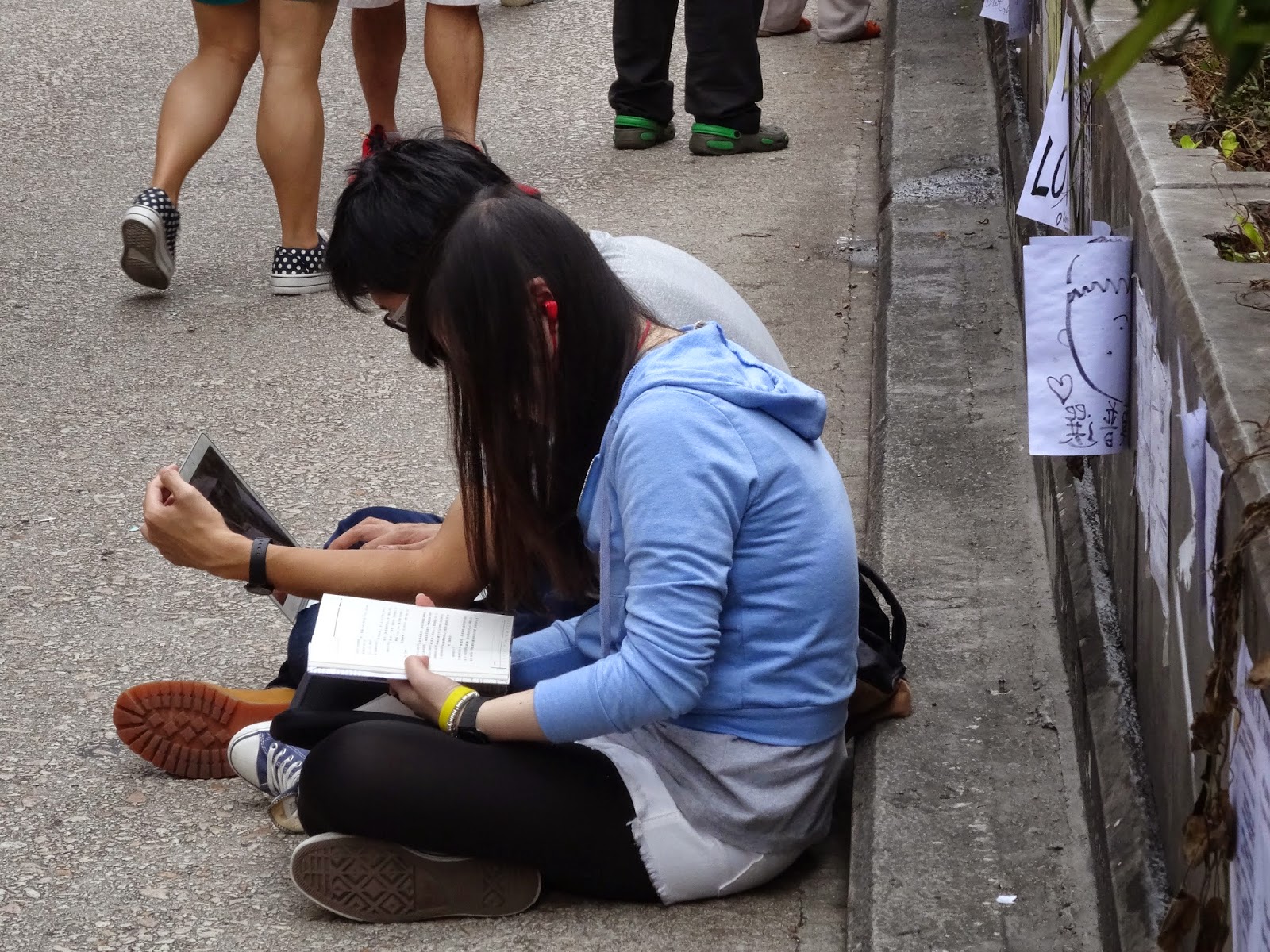 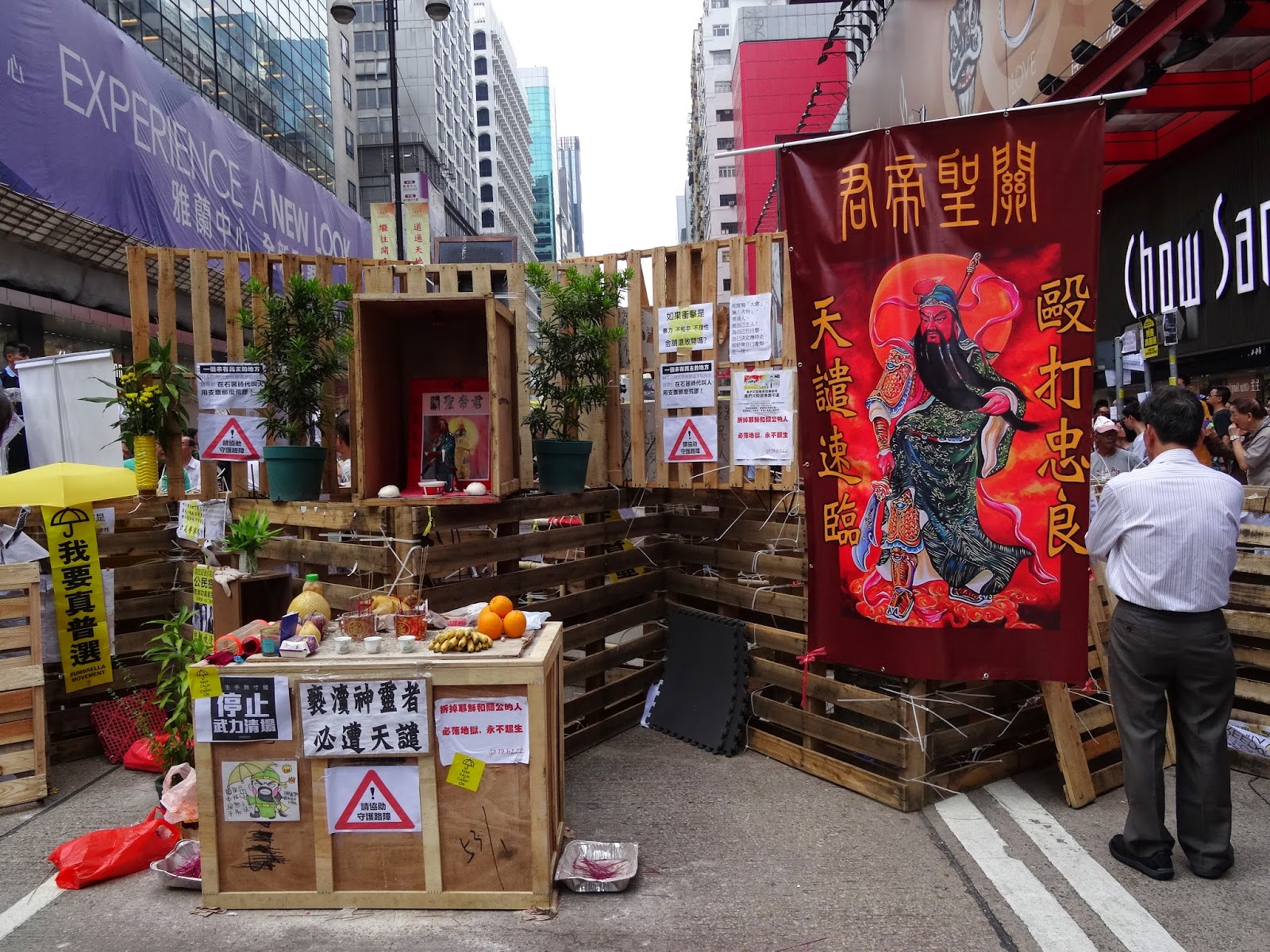 To be sure, there's no question that Occupy Mongkok
has its quirks, such as the shrine to Guan Yu,
the Taoist god of war revered by the police and triads alike 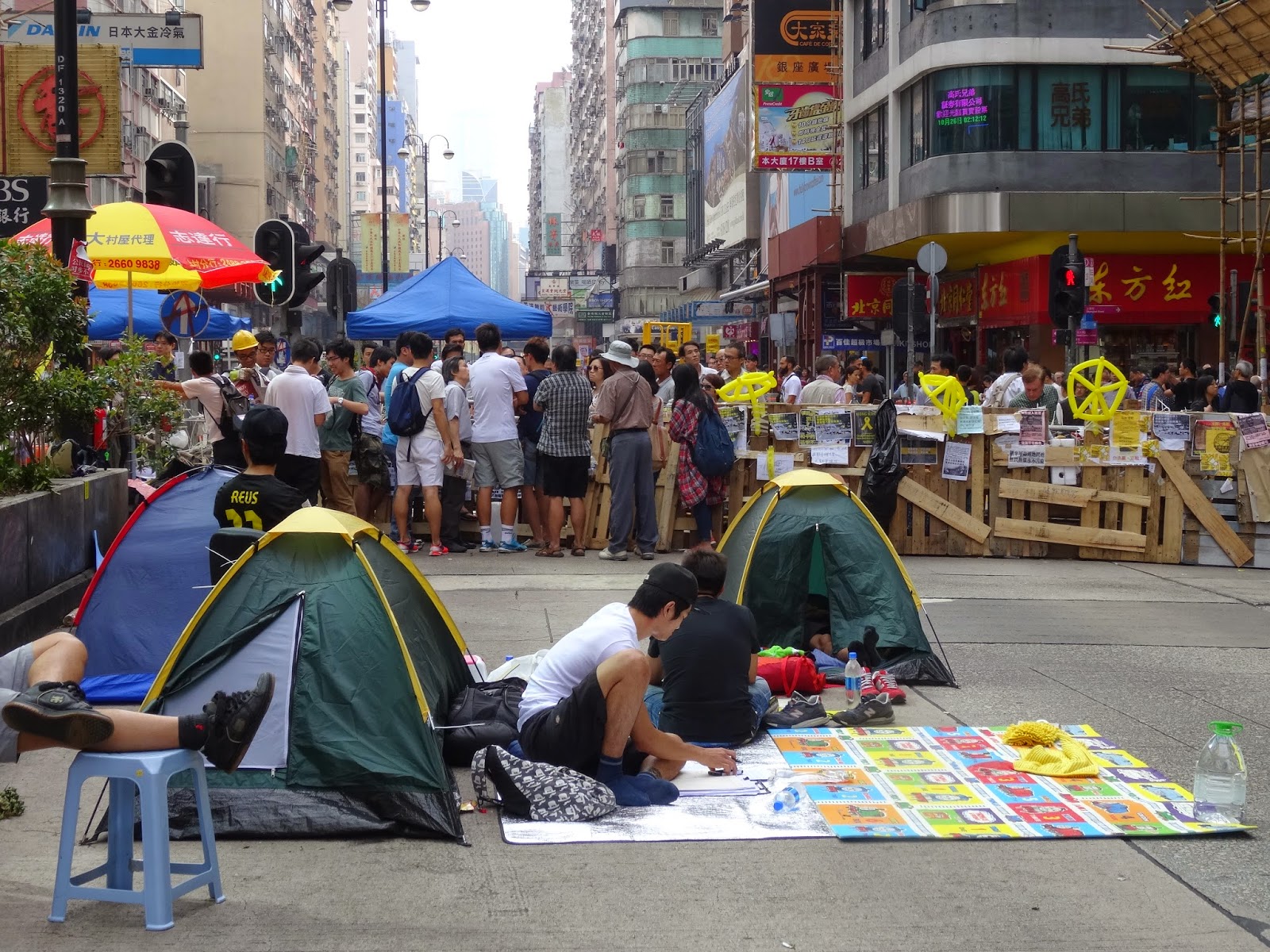 Can you tell that verbals between a few men
are taking place in the background of this photo? 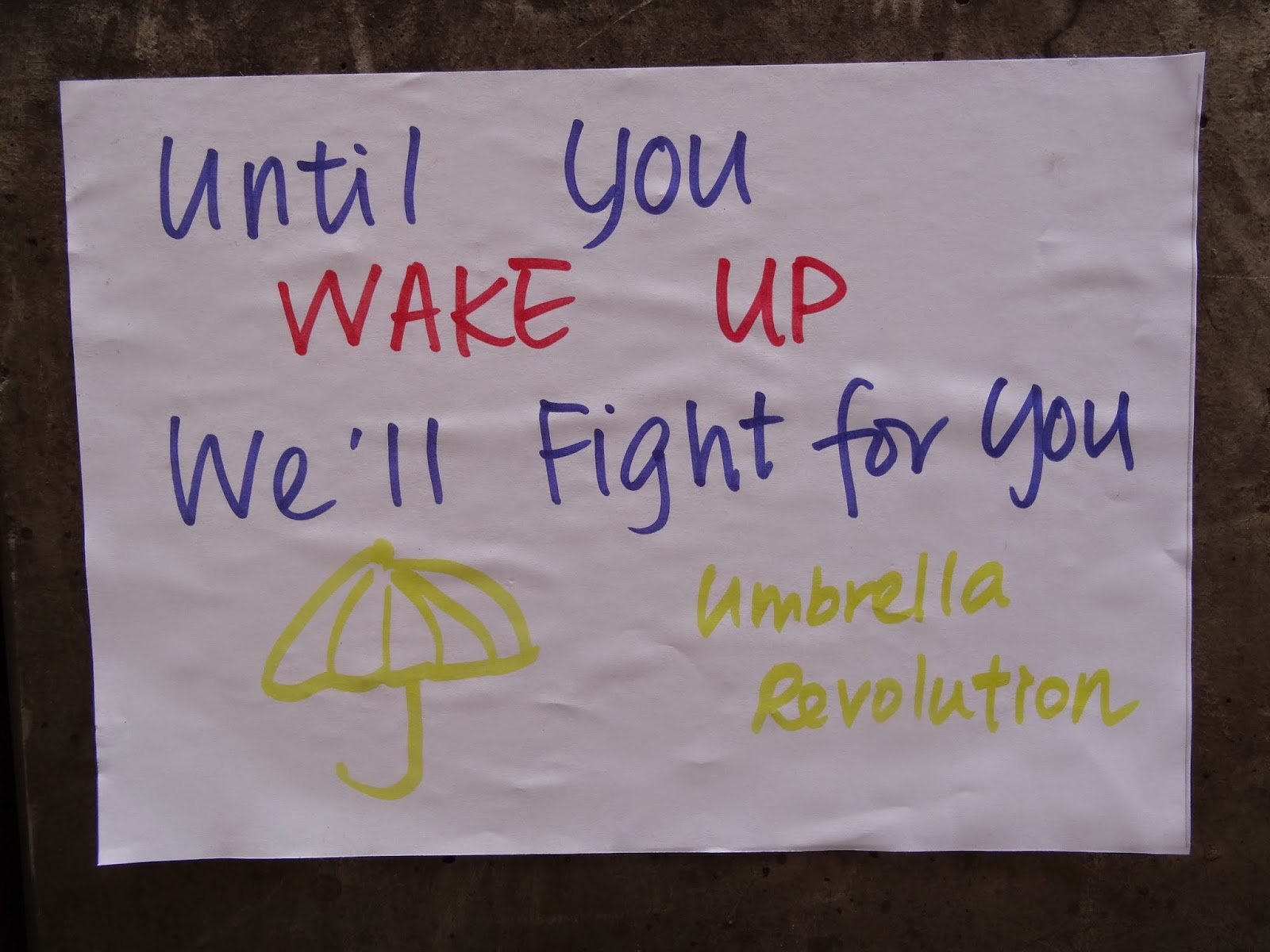 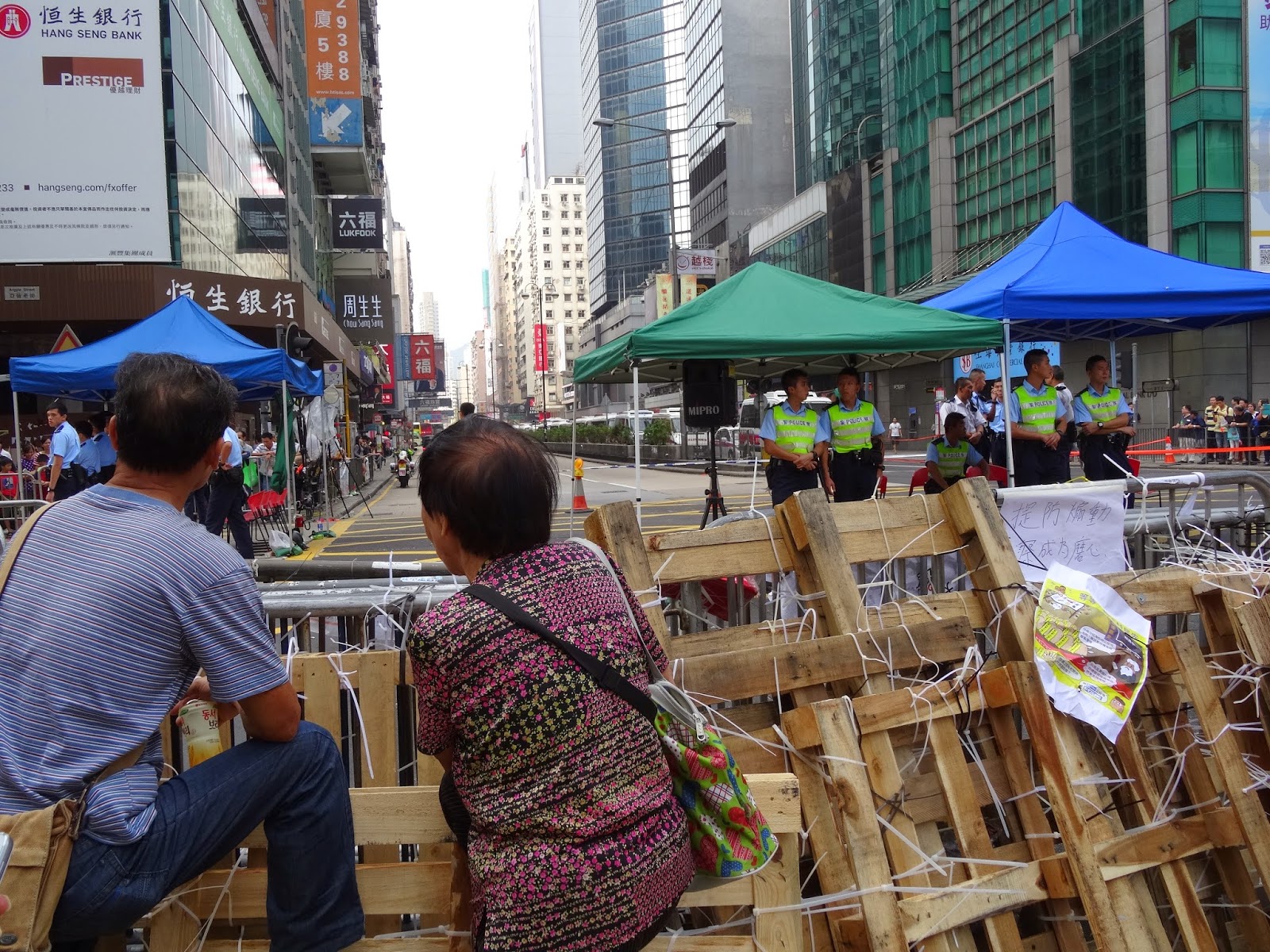 A reminder that not all Umbrella
Movement participants are students! 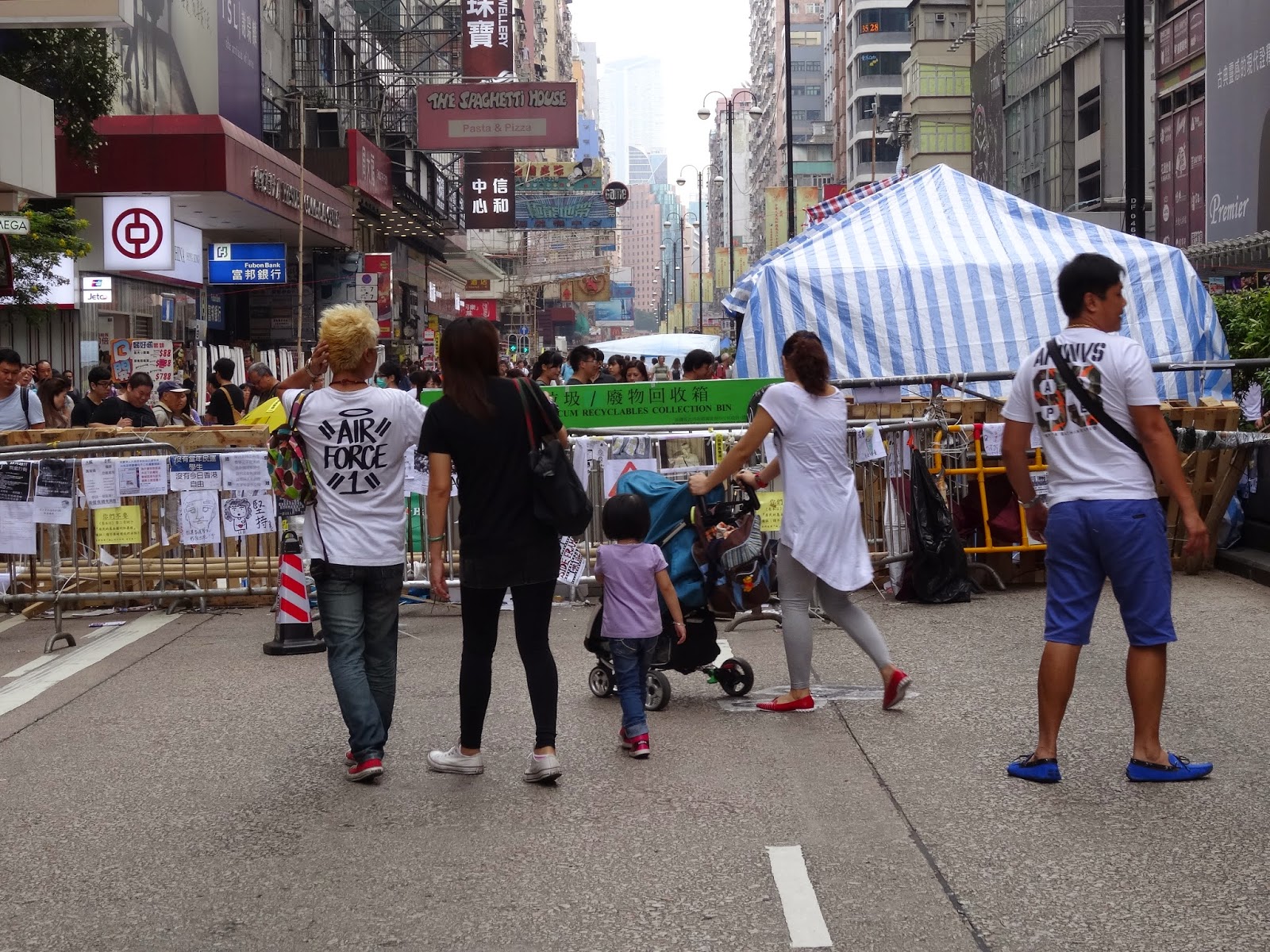 Yes, some parents think the area safe enough to bring their kids 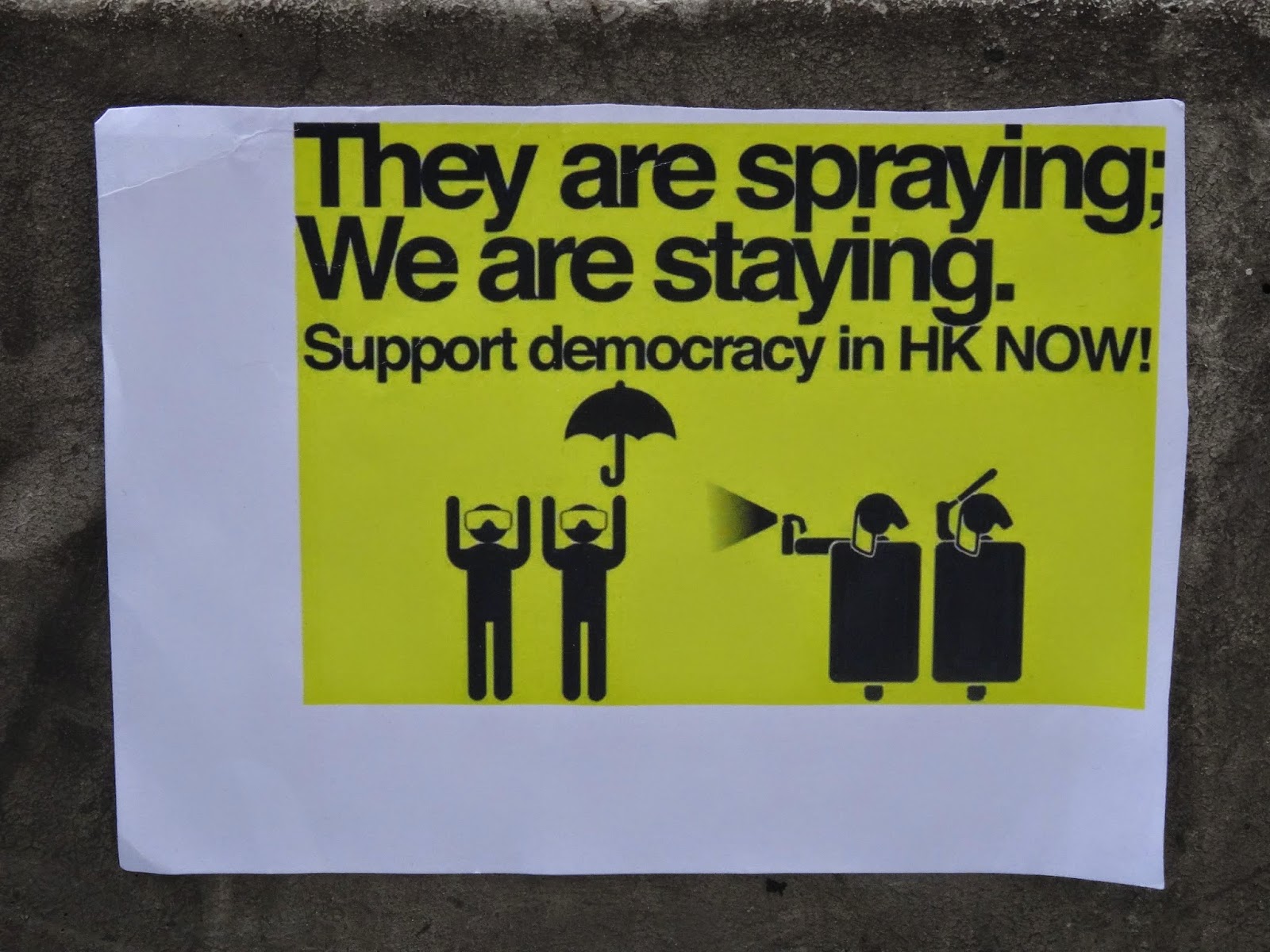 No spraying this afternoon -- thank goodness --
but much evidence about that people are staying (put) there!
Posted by YTSL at 6:25 PM

Your points are well made and evident, I think, to people who have spent time at the Occupy sites. However, I think reactions like your friend's will increase the longer the occupation continues. This is the waiting game the government is playing. As long as they keep their cool, the public opposed to Occupy will get more and more angry. But whenever the government fumbles, as it seems prone to do, support for Occupy is bound to increase in proportion to the incident or remark.

The whole situation is stressful and worrying for all sides, and the urge to return to normal is completely normal. The interesting thing now is that the longer the Occupy movement continues the more it becomes a new normal, presenting an alternative way of living and relating to others.

There is a line of text at the end of the recent documentary My Voice, My Voice that has stuck with me. It was something about how the "unsettling" and "elevating" the ordinary person. At the time I saw it, the relevance to the Occupy movement was uncanny. These demonstrations are pushing people out of their comfort zones, provoking feelings, both unsettling and elevating, in everyone -- even a visitor like myself -- touched by them.

Anyway, I continue to follow the events with great interest and empathy.

A good photo-essay that continues your obviously dedicated coverage...I especially like the image of Guan Yu. This one image is enough to make me wish I was there...I think these images of the protests are important for documenting HK history as it is being made.

I recall reading somewhere online that some local art galleries have voluntered to store some of the social protest artwork produced by the movement. Hopefully, one day there will be a separate room in a museum devoted to the artwork produced during the protests. Of course, the centerpiece of the exhibit would be the umbrella man sculpture...It was very generous of Vladimir Ashkenazy to give free concerts, which proves that this movement is using all the arts, even classical music.

It seems that I always find a Hong Kong movie that can be a metaphor for current events. Such a movie is Jacob Cheung's Cageman, which I was lucky enough to find on YouTube. This has some of the most naturalistic ensemble acting I've ever seen in a film. I'm glad it won best picture at the HK Film Awards in '92, as it is a very moving depiction of HK's underclass...

I would think that some of the younger protestors are concerned about what the quality of their life will be in HK, if there will be enough good jobs to pay their rents so they can avoid being drawn into HK's underclass.

Thanks much for your comments.

In a recent SCMP survey, it was found that the percentage of people who are pro-Umbrella Movement has increased in recent weeks. But yes, I also think that -- fanned by misinformation -- resentment also grows. In other words, the uncommitted, "neutral" middle is shrinking.

Absolutely re stressful, etc. Like I told my friend: I would like some things to go back to normal too! I.e., I'd like to feel relaxed enough to be able to go hiking again on Sundays, I'd like to be able to blog about my Japan trip without feeling like it'd be frivolous to do at the moment, etc.!

Interesting re your thought re "My Voice, My Life": I've been seeing messages about the Umbrella Movement in all sorts of films that I watch too... ;)

And thank you too for your comments. I love that this blog post has inspired comments that are so lengthy and thoughtful. :)

Yes, there is indeed a sense of history being made.

Re the art: Hong Kong's museums thus far are unwilling to commit to collecting/helping preserve the art in the protest areas. Well, since such as the Hong Kong Museum of Art and Hong Kong Heritage Museum are operated by the government...

At the same time, it's also true enough that much of the art on display's strength stems from their location. Context is indeed key.