When I visited the Occupy areas on the Sunday afternoon and evening before the Monday morning that 689 had said the roads needed to be cleared of protestors, it was with a sense that I might well be doing so for the final time.  But last night, when I went again to those areas, I found that some barriers that had been removed on Sunday in Causeway Bay were back blocking sections of road again and that there was still no small amount of people about in Admiralty.

To be sure, much of life feels like normal these days in many parts of Hong Kong -- but that's actually been the case all this time.  (Thus it was that even while I entitled my first blog entry post my return from Japan Hong Kong in turmoil, I did also write about my observing "people doing stuff such as going about shopping at the nearby high end Pacific Place mall, drinking in a bar located inside it, heading into the cinema there to catch a movie, etc." that day.)

At the same time though, there indeed have been people out protesting-- and usually in a way and in an atmosphere that's so peaceful, polite, civil and, well, civilized that it has amazed many people and initially bemused many visiting journalists but may now have bored them!  Consequently, Hong Kong has quietly slipped out of the news in many parts of the world in recent days.  But as the following photos show, people still are visibly out there and, in their own way, doing their bit to make Hong Kong a better place:- 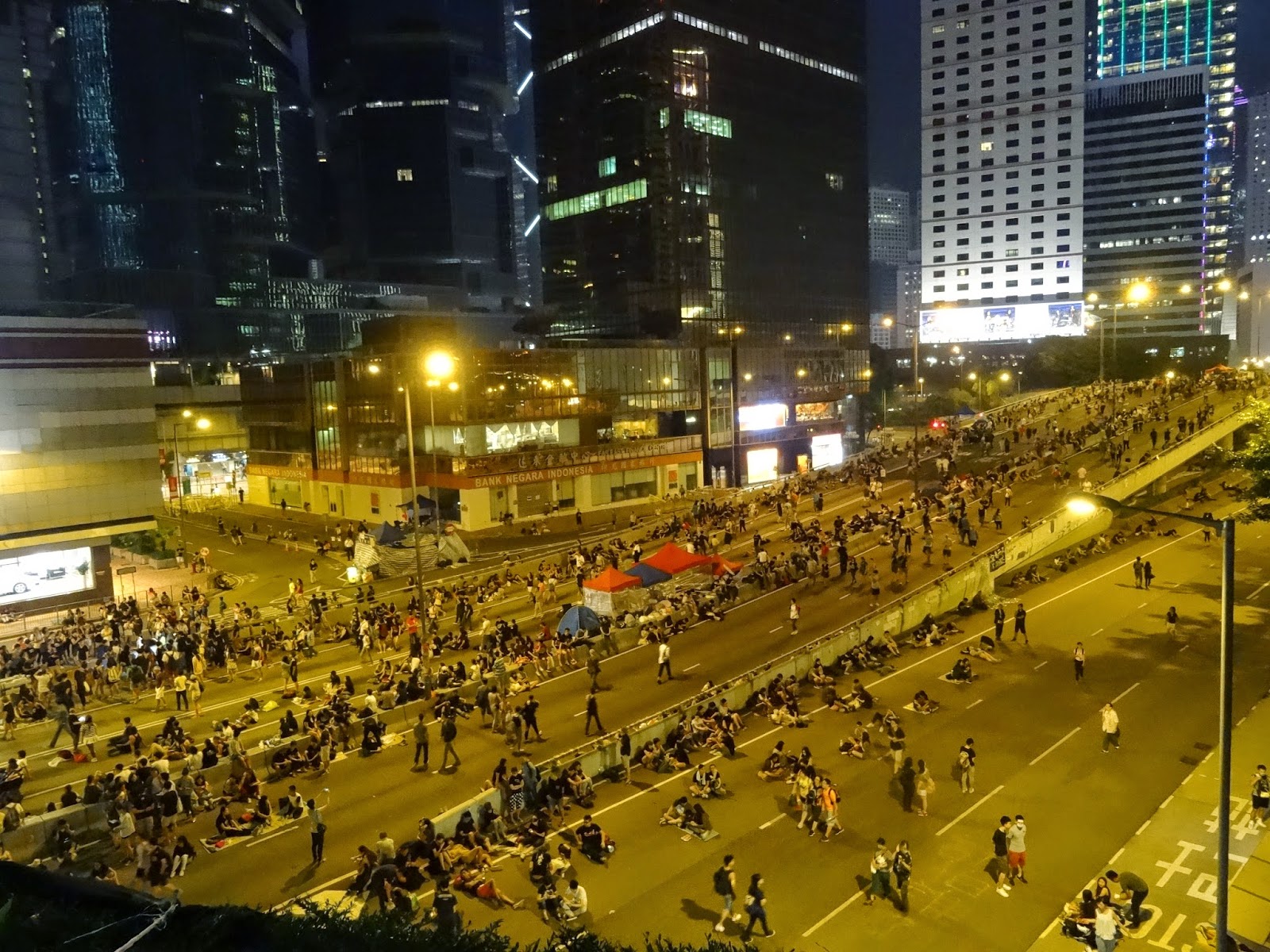 Yes, there weren't as many people out occupying Admiralty
on Sunday night as on Saturday evening but it's not like
there was just a handful of people out there either! 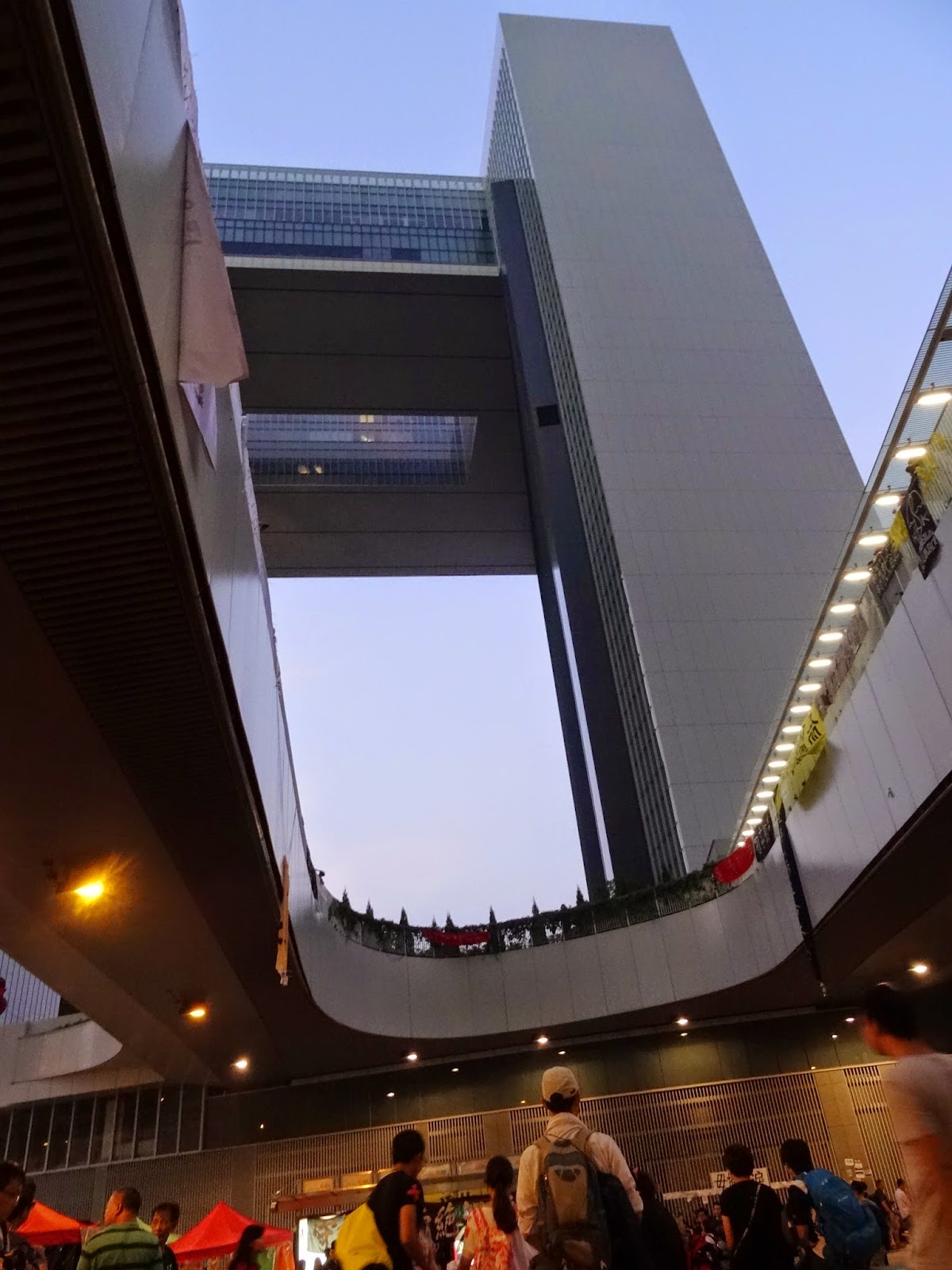 Doesn't the Central Government Complex at Tamar look like
it was designed to arrogantly suggest that the folks who those
who work in it actually are supposed to serve are just small fry? 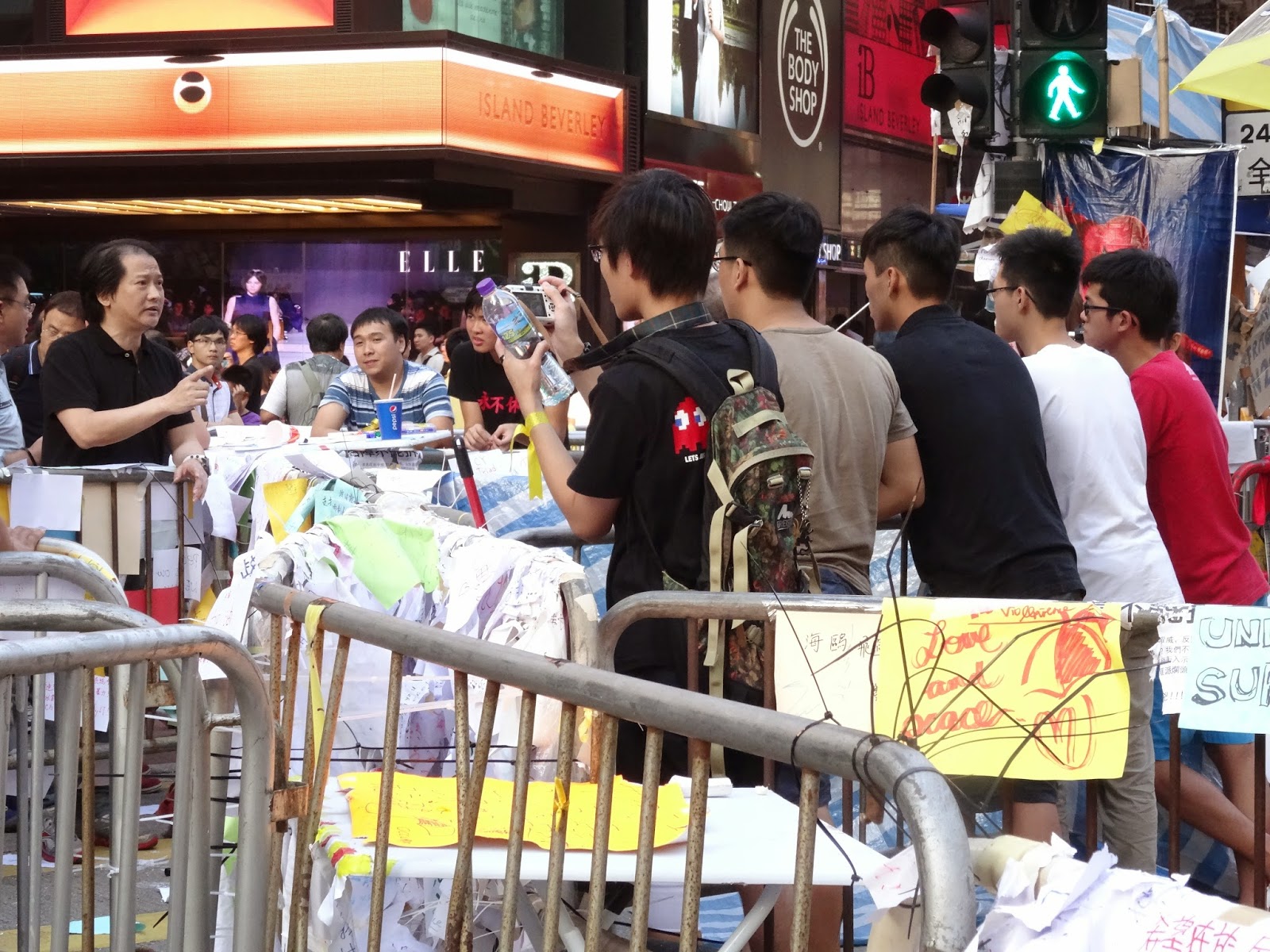 On Sunday, I did see a few "anti Occupy" people
launching diatribes at tolerants protestors 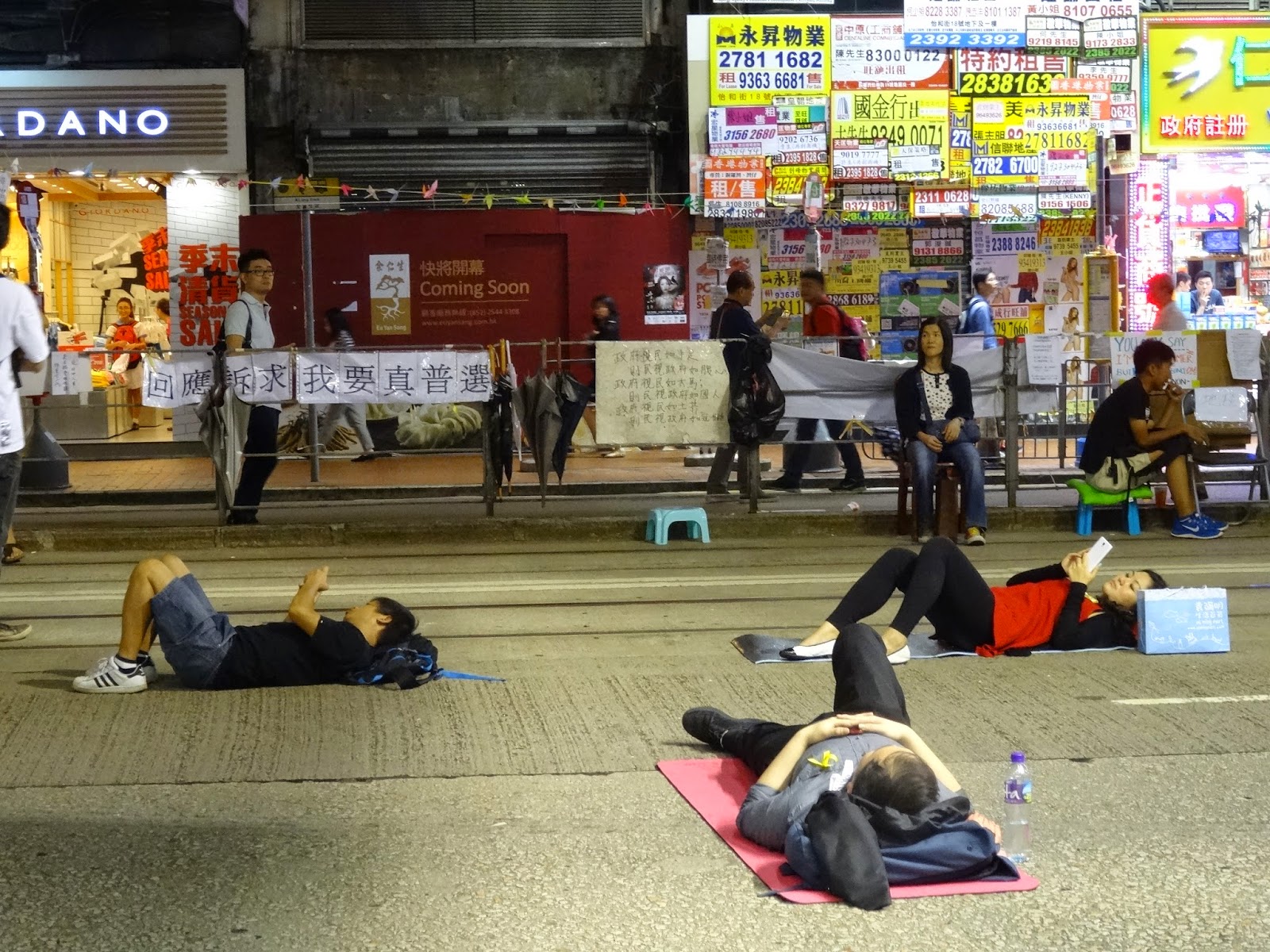 Last night, a much more peaceful and laidback --
sleepy even ;) -- scene greeted me at Causeway Bay 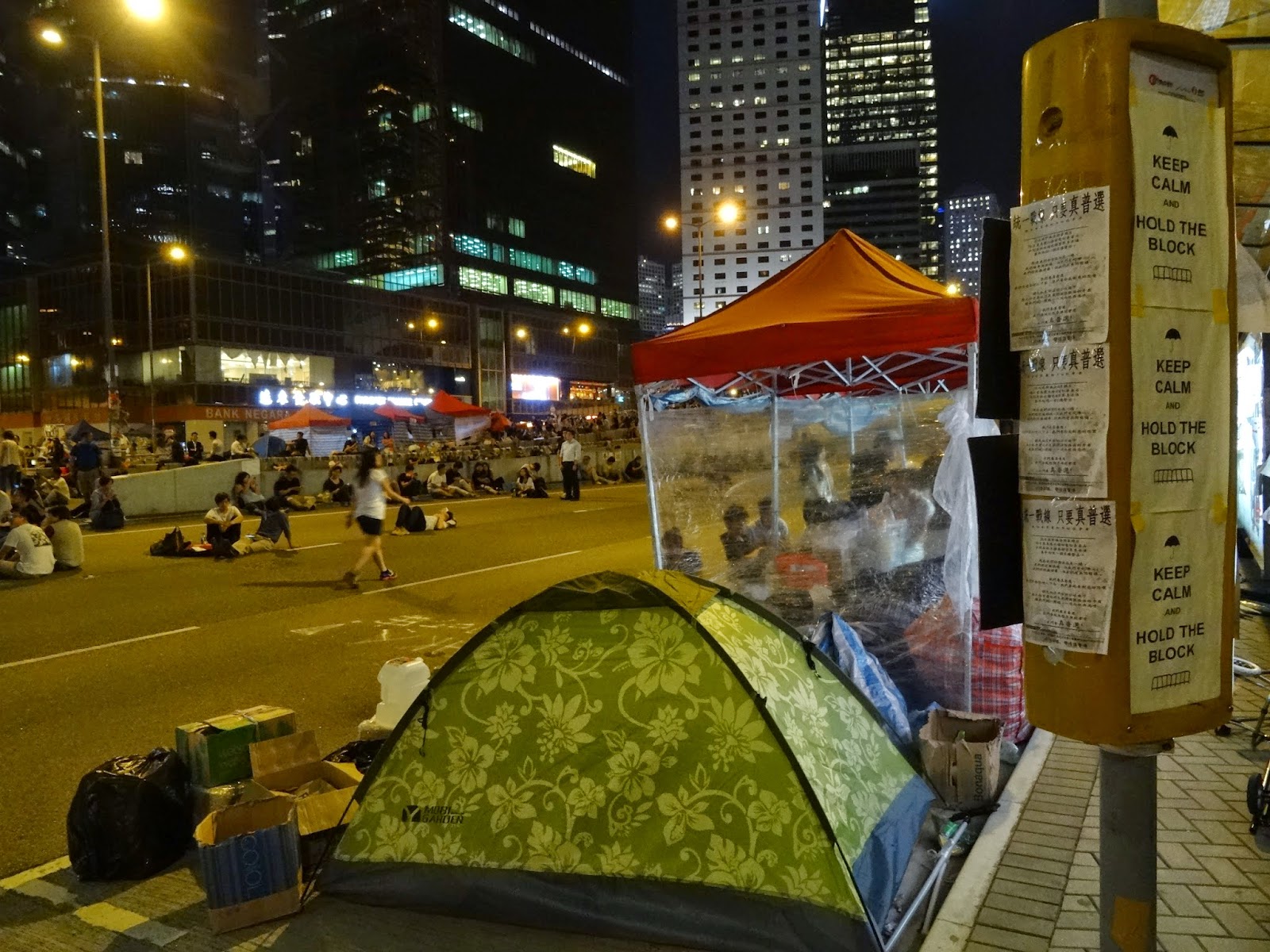 At Admiralty, there even were tents for people
to sleep on the streets in more comfort! 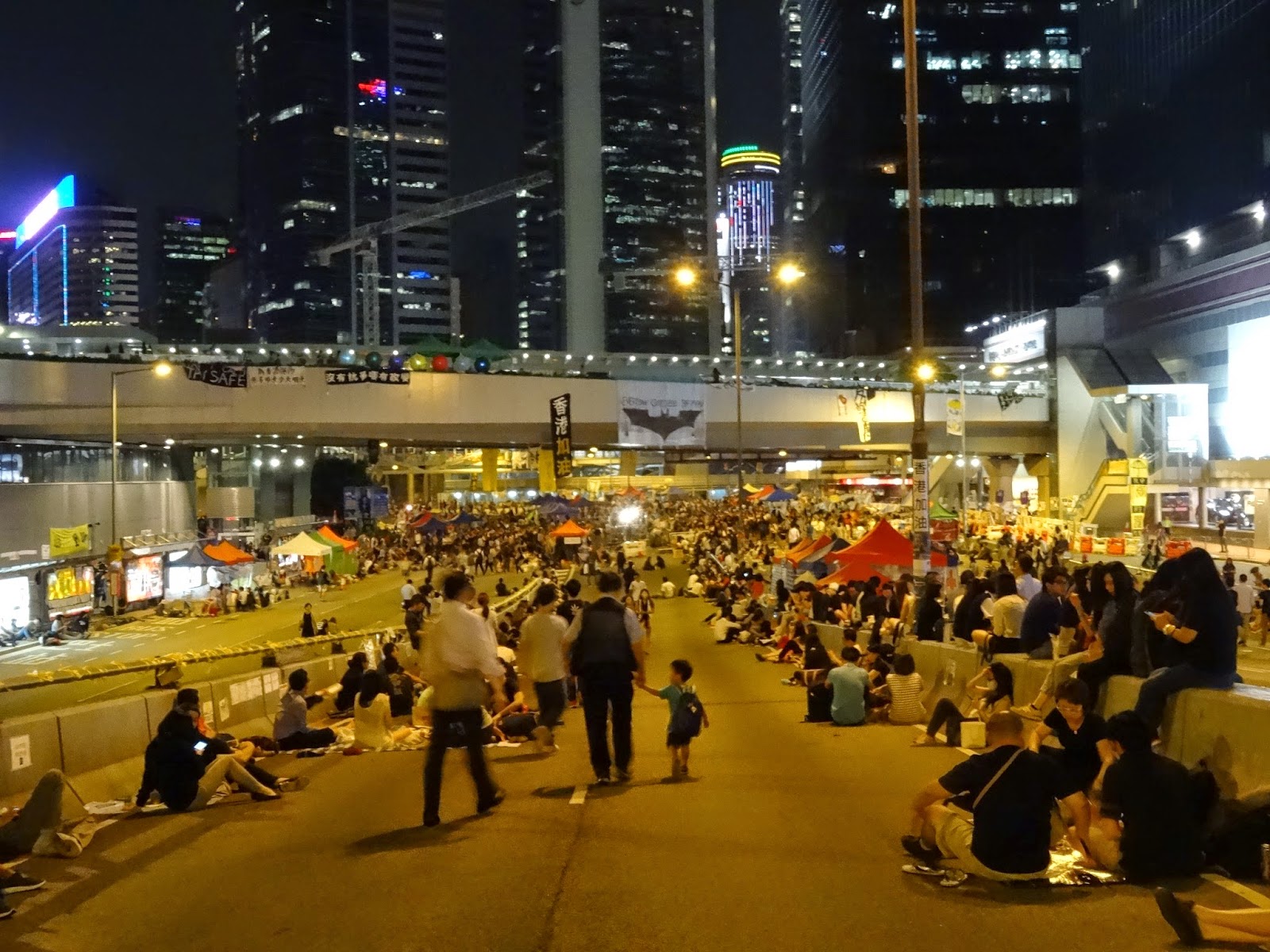 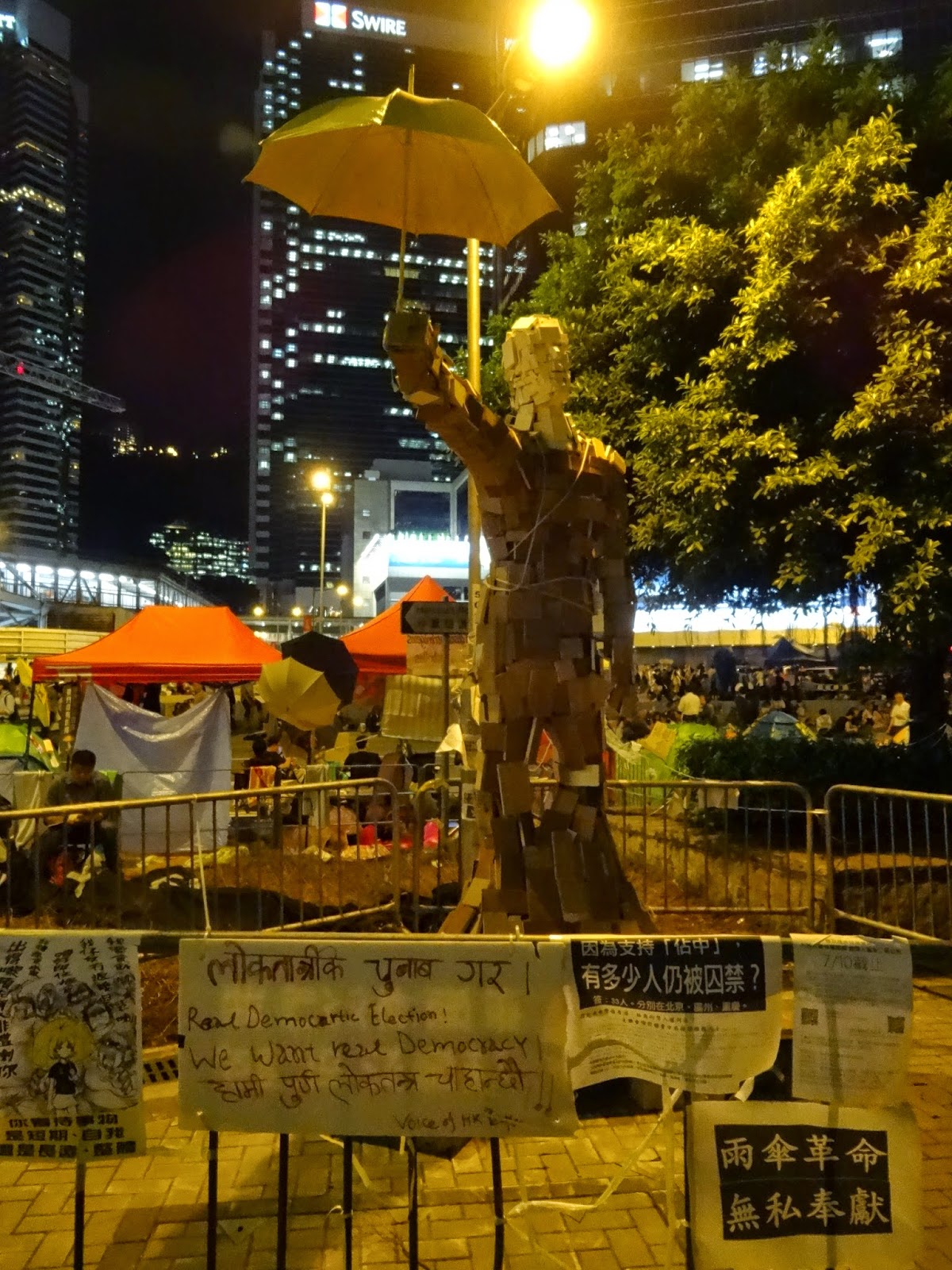 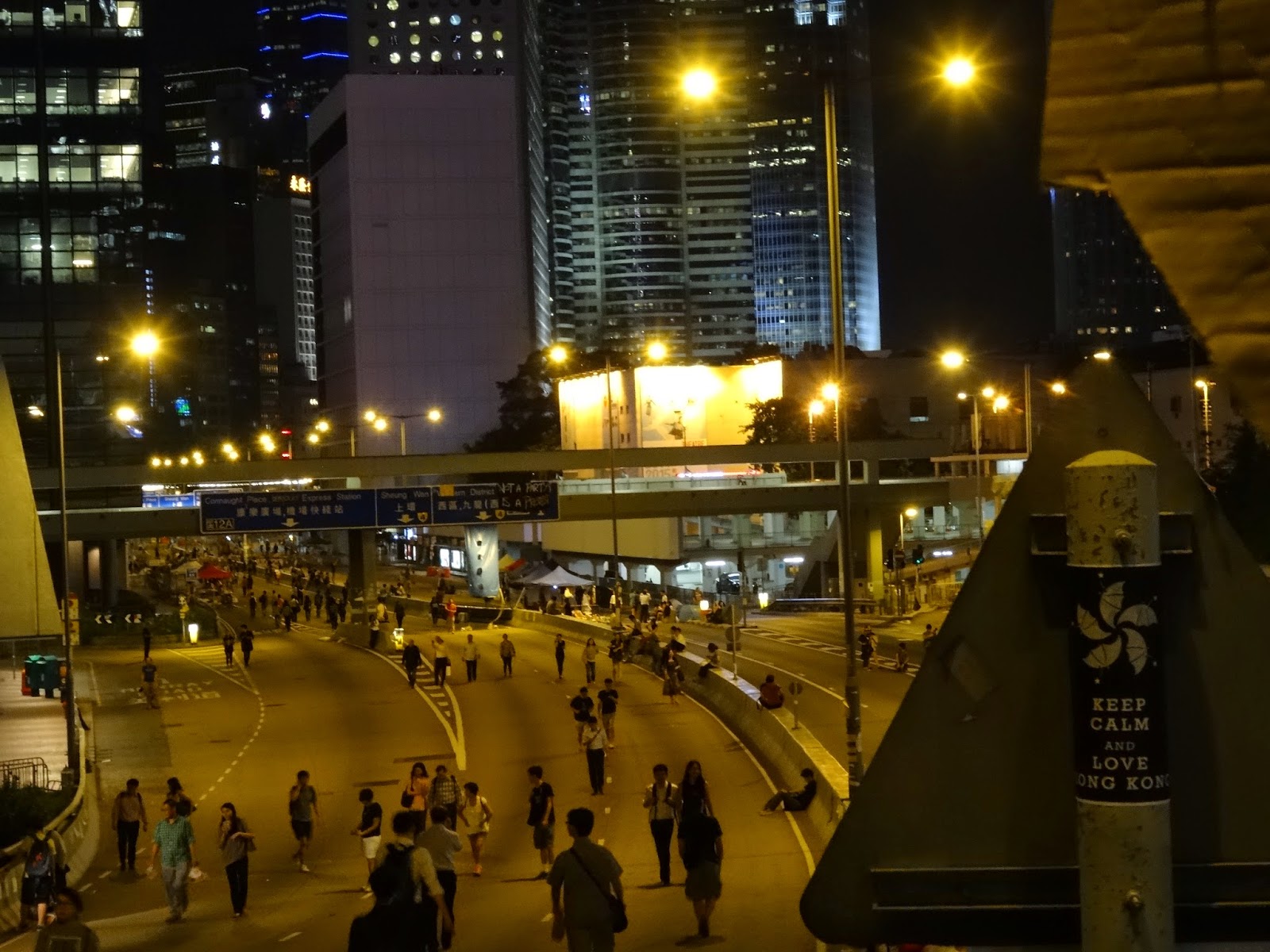 People strolling about in the protest area and doing what
the poster is telling folks to do: "Keep calm and love Hong Kong"!
Posted by YTSL at 8:12 PM

Thanks. I just really hope that this peaceful, etc. protest will have a positive outcome.

Scheduled talks between the protesters and the authorities were called off a few hours ago. So I'm feeling more tense now than when I wrote the blog post.

At the same time, I really am trying to keep calm and continue loving Hong Kong.

Of the protest blogs you've posted so far, I like this one the best...I like the photo of Government Headquarters which symbolically dwarfs the diminutive figures of the people...The fourth photo from the top of three people lying in the street, contrasted by people walking past in the background - appears very surreal to me.

The photo of the Umbrella Man is especially endearing. He seems to have become a genuine Hong Kong icon and possibly - a universal symbol of defiant yet peaceful protest...I'm sure filmmakers will be coming out with documentaries about the protests...And I suspect that someone will eventually make a feature film about the human dramas taking place among the protestors.

Are you familiar with Tammy Cheung's "July" and "Election"? I know she's been out filming these protests.

On the non-documentary front: I could imagine Wong Jing coming out with a film with this backdrop... ;)

This is one of the better blogs posts re: Occupy Central. Keep up the good work...

God no, having Wong Jing distorting the truth again? somebody please turn him into ground meat...

I rather have Chapman To or someone having a conscience doing a film instead.

Thanks for your positive words!

Re Wong Jing: can't take his films seriously but, as it so happens, the latest movie Chapman To is in (Flirting in the Air) happens to be produced and scripted by... Wong Jing! ;b

You asked me in this comments section if I'm familiar with Tammy Cheung. I'm not but I did find some information about her online. She sounds like a serious documentary filmmaker. (The last documentary you recommended on these pages months back, Hu Jie's Though I am Gone, made such a strong impression on me that I still think about the victimized school teacher in that film. Such is the power of film.

You mention Wong Jing. Actually, Wong Jing has been involved in some very good movies and some very bad movies...In a proposed feature film about the protests - well, I don't know much about younger directors in HK these days, but among established names I have a few possible names...Maybe Ivy Ho writing the screenplay; Ann Hoi or Peter Chan directing, or even Fruit Chan.

Tammy Cheung is indeed a serious documentary filmmaker -- and, incidentally, it was at one of the Chinese Documentary Festival that she organized that I viewed Hu Jie's "Though I Am Gone".

Re Hong Kong feature filmmakers: it's been a long time, alas, since Peter Chan made a Hong Kong movie. (His recent films are mainland productions.)