Encouragement and support for the cause 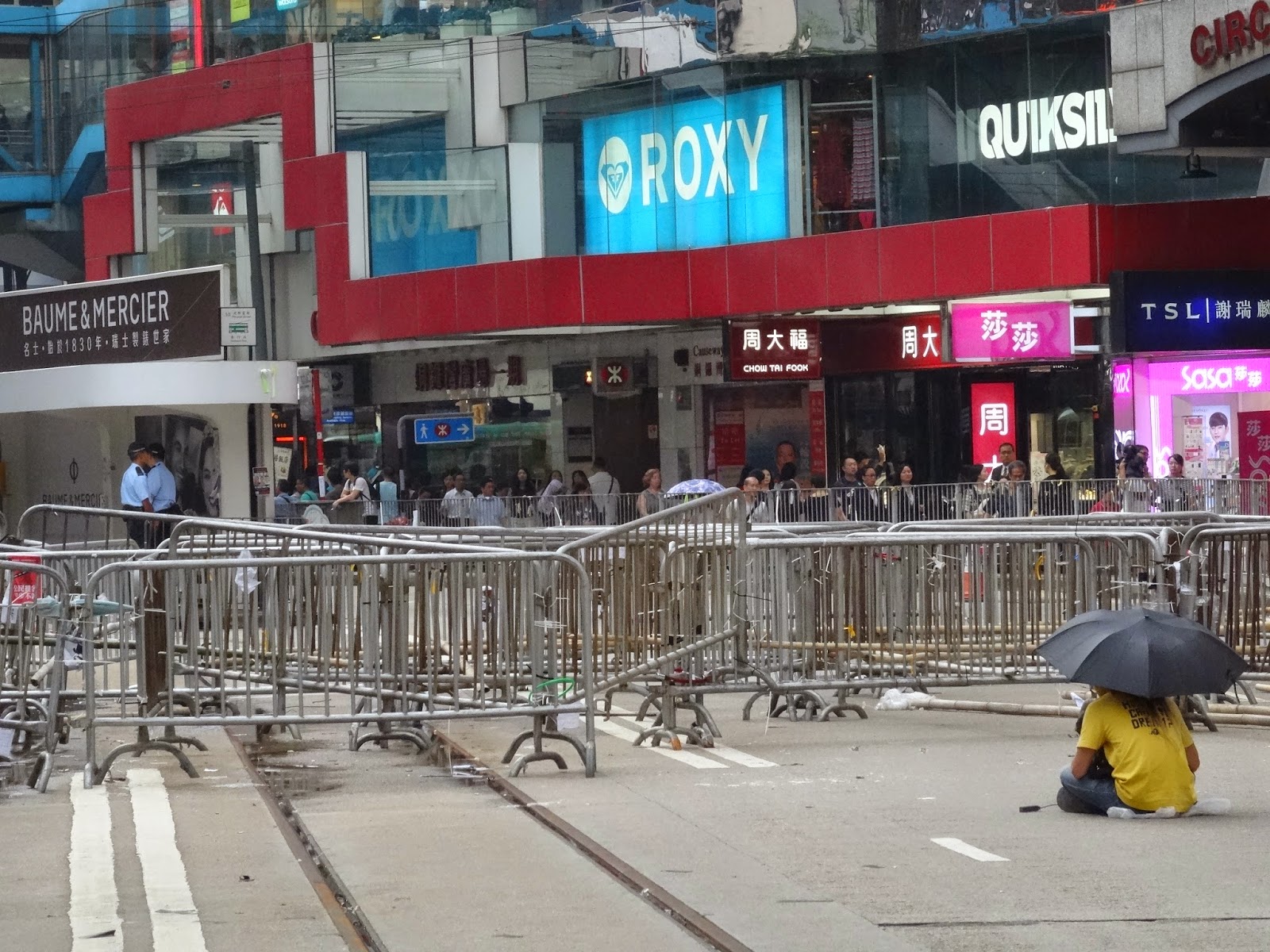 Scene in Causeway Bay this afternoon 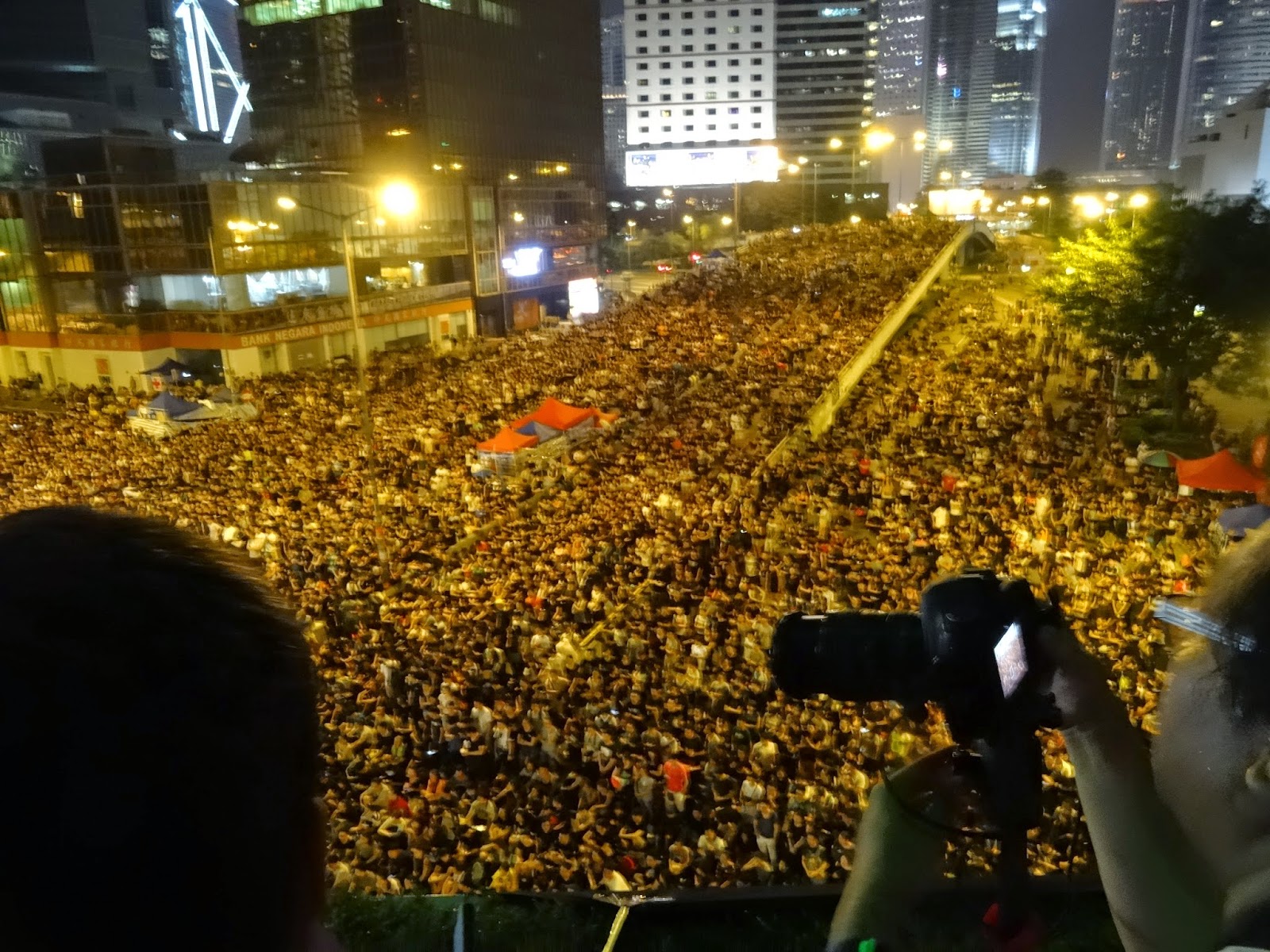 I woke up this morning with a heart heavy with worry and felt even more upset upon reading news of Umbrella Revolution participants having been punched, kicked and bloodied in Mongkok last night and seeing a video of dramatic scenes that seemed to belong more in a Hong Kong movie than real life.


Figuring that if I stayed at home, I'd just be glued to the computer checking out reports and articles about what was going on in Hong Kong, I decided to head out to Causeway Bay to see for myself what was happening there -- and ended up staying in the area for a few hours this afternoon.


By the time I left, my mood had lifted somewhat.  Sure, the numbers in the Occupy Causeway Bay space were on the sparse side but the mood felt good -- and after being offered water while out there by a couple of people, food by another, and encouragement and approval by a fair few others, I came away convinced that there are a lot more supporters among the passers-by and onlookers than may have been realized.


After dinner this evening, I felt drawn to Causeway Bay once more.  It was good to see that the crowd numbers had increased quite a bit from a few hours previously.  And while there have been media reports about anti-Occupy folks in the area, I personally saw just two of them compared to hundreds of Umbrella Revolution participants -- and of those two, one looked like a real loony (dressed as he was in red guard garb) even while the other did appear to be a genuinely angry see lai who considered the people protesting to be just sitting around doing nothing.

Put another way: the "anti" people hardly seemed to be in the majority in Causeway Bay.  And that was even more the case at Admiralty, where there was a veritable sea of people out this evening, undetered by warnings issued by several sources to stay away!


For those impressed by the size of the crowd at the top of this blog entry: consider that that's not even half of the overall picture -- as, among other things, that's showing just one side of the scene viewable from the overhead bridge that I was on!  And something else that may not be apparent in the photo but was so when I was there is that the crowd at the main protest site -- like in Causeway Bay and elsewhere that I've been -- is not only composed of students; instead, there are old as well as young there, and people from different walks of life too.

Also, for those who want to try to guess at the numbers: bear in mind that this is a very fluid crowd -- in that while there are people who looked like they had been in the area for some time and are prepared to do so for a while yet, the vast majority of people seem to be taking turns doing their bit.

Some may disparage the latter by saying it doesn't look like they're serious. My personal -- and more positive -- take on this though is that this means that there are large numbers of people who feel obliged to continue to go to work and about their regular business for part of the time but still have made the effort to go out for a time to support the cause (and fellow Hong Kongers) they believe in.
Posted by YTSL at 11:53 PM

Look at all those people. We don't have population like that...our little county (Boundary Idaho) have about 10,000 people..now if your counting trees a lot more and mean more.

Hi YTSL, I have read your posts and I am learning more and more about what is currently happening in Hong Kong. I'm very sorry to hear about the recent violence. I am uplifted by the unified voices, courage and commitment of the people who are standing up in a peaceful way for what is right.

My thoughts are with you and for the protesters in support of doing what is right for Hong Kong.

10,000 people in a county -- woah. In comparison, Hong Kong has a population of close to 7.2 million -- and it does look like a fare percentage was in the second photo, right? ;)

Thanks for your attention and thoughts. I am sad about the recent violence but also uplifted by much of what I've seen in the past week. The courage and commitment of Hong Kongers has been far beyond expectation. I sincerely hope that it will not be in vain.

Glad to hear you did your part!

It's hard not to feel obliged or inspired to!

I have two questions to peppylady and Trekcapri...what are you doing about it? Maybe start by NOT purchasing anything made in CHINA. Not doing any business with those who speak Manadrin? I would write to anyone who listen to sanction China for what it does to HK.

YTSL, are you aware that those CCP anti-Occupy thugs/triads sexually assaulted and sexually harassed female protesters of Occupy Central?

"Only way Evil triumps is everyone to do NOTHING"

Am not sure you're going to get answers from peppylady and Trekcapri as I don't think they visit this blog *that* often -- maybe once a week, tops. But I'm going to ask you about one of the questions you ask them - no business with those who speak Mandarin? Er... surely there are Mandarin speakers from elsewhere besides Mainland China (like, say, Taiwan)?

For myself: yes, I am aware of the sexual assaults and harassments. Re the PRC government attempting to interfere with local governments in the US, etc.: yes, also.

But I am not going to write about everything -- do please realize that this is a personal blog, not one that is meant to be comprehensive.

By the way, have you thought of creating your own blog? You appear to have strong opinions and plenty to say!

You could tell where the person is from, what kind of Manadrin they are speaking, even English. Also whether they use trad vs. simplified characters. Can also tell by the way PRC chinese dressed.

re: blogs, they aren't secure, especially in the mainland now you have to register with real ID. Currently I am in no position to risk my personal safety to get my point across. The only thing I can do is NOT INVEST in any CHINESE companies, NOT PURCHASE OR NOT (or SEVERELY LIMIT) DO BUSINESS with anyone from the PRC

CCP is known to have triads kidnap ppl from HK (or Canada), place them inside China, then arrest them for whatever.

actually, CCP interfered (or meddled) in US gov't affairs, period by pressuring mayors and sponsoring protests.

Okay, it sounds like you're from -- and/or regularly spend time in -- the mainland. Let me give you some perspective then: many people living far away from this part of the world can't distinguish between Mandarin and Japanese and Korean, never mind traditional vs simplified characters, etc. To ask for a boycott of business with Mandarin speakers, etc. risks racism.

Also, something I believe the Umbrella Revolution/Movement has got absolutely right: its tone. Put another way: if you are too strident, you risk losing the sympathy that is the first step towards getting support for your cause.