On a tense night in Hong Kong 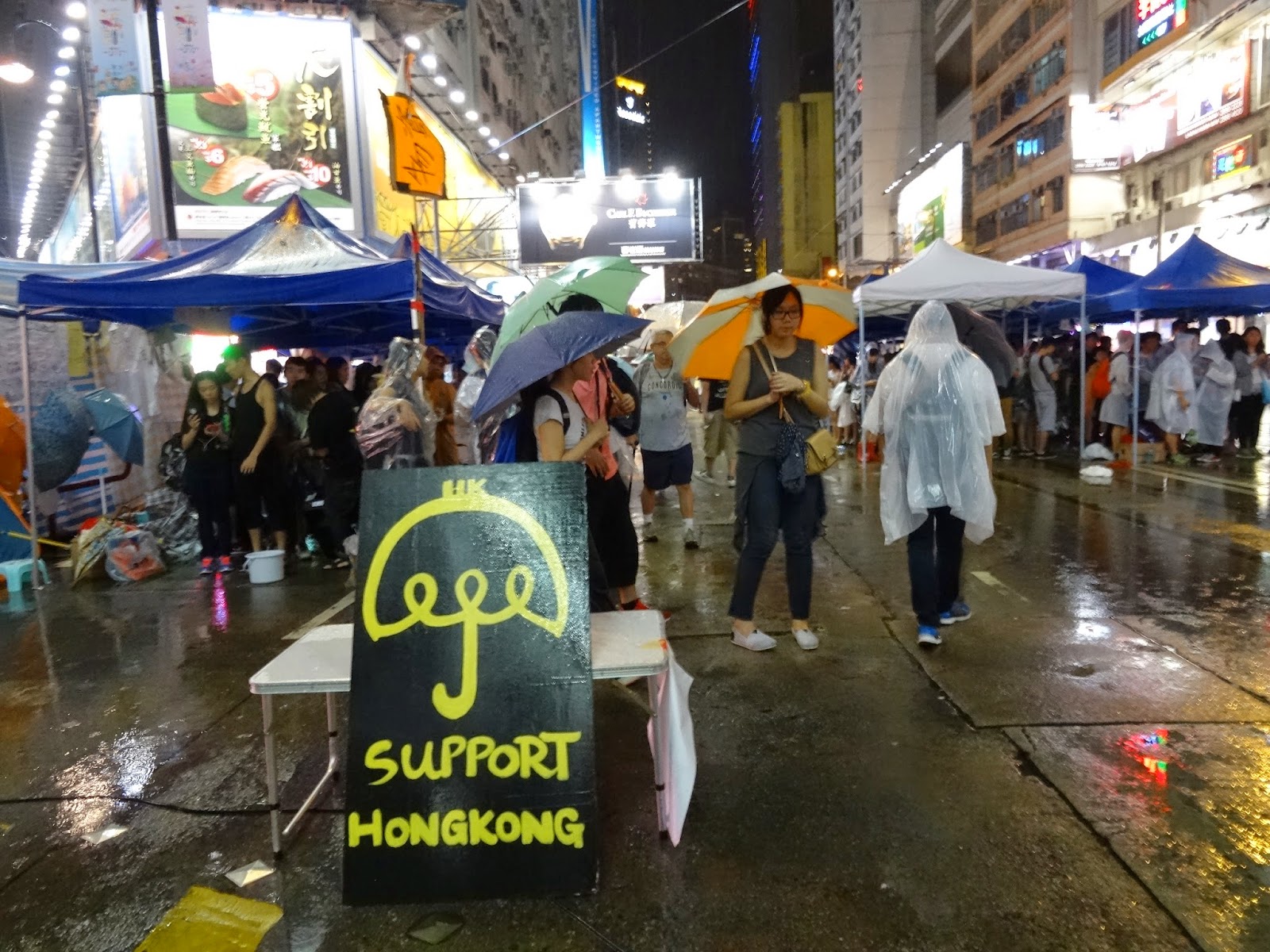 A message surely all Hong Kongers can agree with? 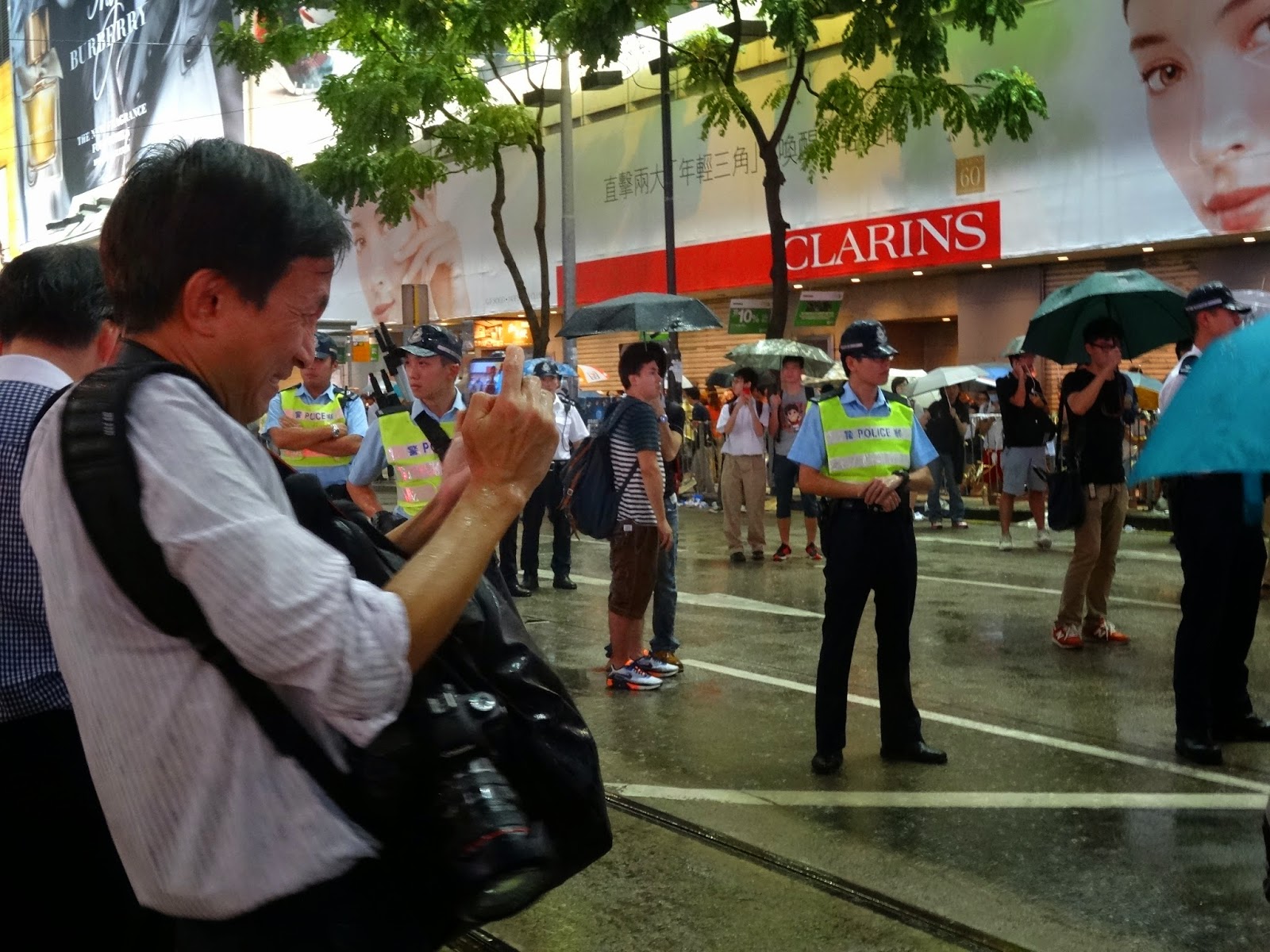 So why is it that people are feeling that
there are enemies in our midst?

Today was one of those days where it was really hard to concentrate at work, so much so that there were times when I got frustrated at how little I managed to concretely accomplish and upset at how far I've fallen behind schedule.  I suppose I could take some consolation in that I was far from the only person in my office -- and in Hong Kong -- feeling this way.

This is the result of wishing, feeling, that one should be somewhere else rather than in a place removed from the action -- and this particularly on a day when there are genuine fears that some, if not all, of the areas that had been transformed in recent days into spaces where freedom and genuine camaraderie ruled could be no more within the next few hours.

So after work, I made for Causeway Bay -- first, to have dinner at one of the area restaurants (to give them patronage and consequently hopefully ensure that they don't turn against protestors out of frustration that their economic wellbeing is in danger) before heading out to the streets.

On the way up to the upper floor eatery I dined at this evening, I witnessed a confrontation down below between an anti-Umbrella Revolution person and several protestors and sympathizers, who surrounded the isolated angry man and did such as take photos of him.  Unlike the clashes going on this evening in Mongkok, this confrontation did not result in any blows being traded or items such as plastic bottles being thrown at people.

After dinner, I went into the area in front of Sogo and was shocked to see a large number of policemen there.  Frankly, they were the first uniformed police I had seen since passing by the police headquarters in Wan Chai on Wednesday -- as the streets of Hong Kong have been unusually devoid of a police presence since Sunday.

Whereas I previously looked at the Hong Kong police positively (as one would expect from having watched hundreds of Hong Kong movies with police heroes in them), I found with a shock that my reaction now upon catching sight of them was one of major distrust mixed with palpable anger.

I honestly wish I didn't feel this way and reckon that starting from tonight, members of the Hong Kong police have a chance to change back public opinion about them by making sure that they do their bit to keep the peace by doing such as arresting troublemakers who threaten the peaceful protestors with violence.

Thus far, however, they have been disappointedly acting more like the enemy -- or mere passive bystanders -- to those who have been created positive images of Hong Kong for the world to see.  For example, when I encountered another anti-Umbrella Revolution individual loudly abusing protestors, I witnessed members of the latter group advising one another to stay calm and steer clear of her -- while the police who were in the vicinity acted like immobile statues who couldn't see or hear what was going on.

If only they would get to acting like fellow Hong Kongers with a heart and fellow feeling -- or, at the very least, carried out their assigned duty to help keep the peace in the territory (rather than be seen as having a role in disrupting it).  Better still: if only those who give them orders were to have a change of heart by showing that they too do genuinely care for Hong Kong rather than (just) their own masters.
Posted by YTSL at 11:53 PM

Today was really hard for me too, YTSL. I've been following the protests via SCMP's live updates. I can't tell you how sad I am to see the situation turn so ugly. I understand some people's frustrations but to resort to violence is unconscionable. And the inaction of the police towards those attacking the protestors is tantamount to complicity. Not to even mention the evidence of organized instigation by parties opposed to the protestors. I'm concerned for and inspired by by all those brave souls who are continuing the occupation and staying committed to the principles of non-violence. Now more than ever is the time for the government to make a genuine conciliatory gesture. I pray that this happens before things get worse.

I am feeling better now than I did 12 hours and 24 hours ago -- and convinced that the people moved to violence against the Umbrella Revolution participants are in the vast minority, and probably not even Hong Kong residents.

Re the police and the government: I can but hope that at some point, whatever moral fibre they possess will get them to behave better than they thus far have done this week.