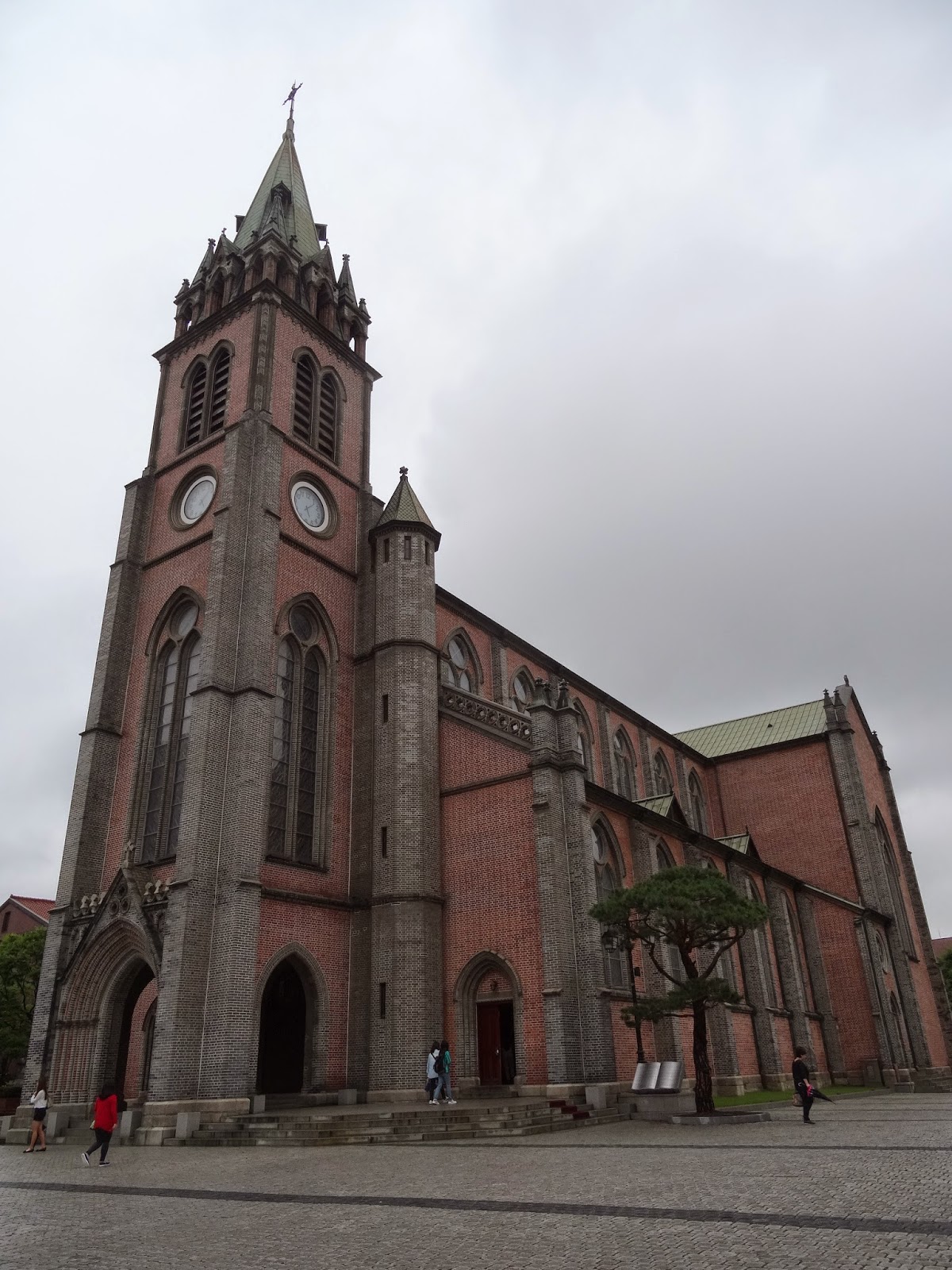 Myeongdong Cathedral looks more unusual in this photo
than in real life, thanks to perspectival distortion! 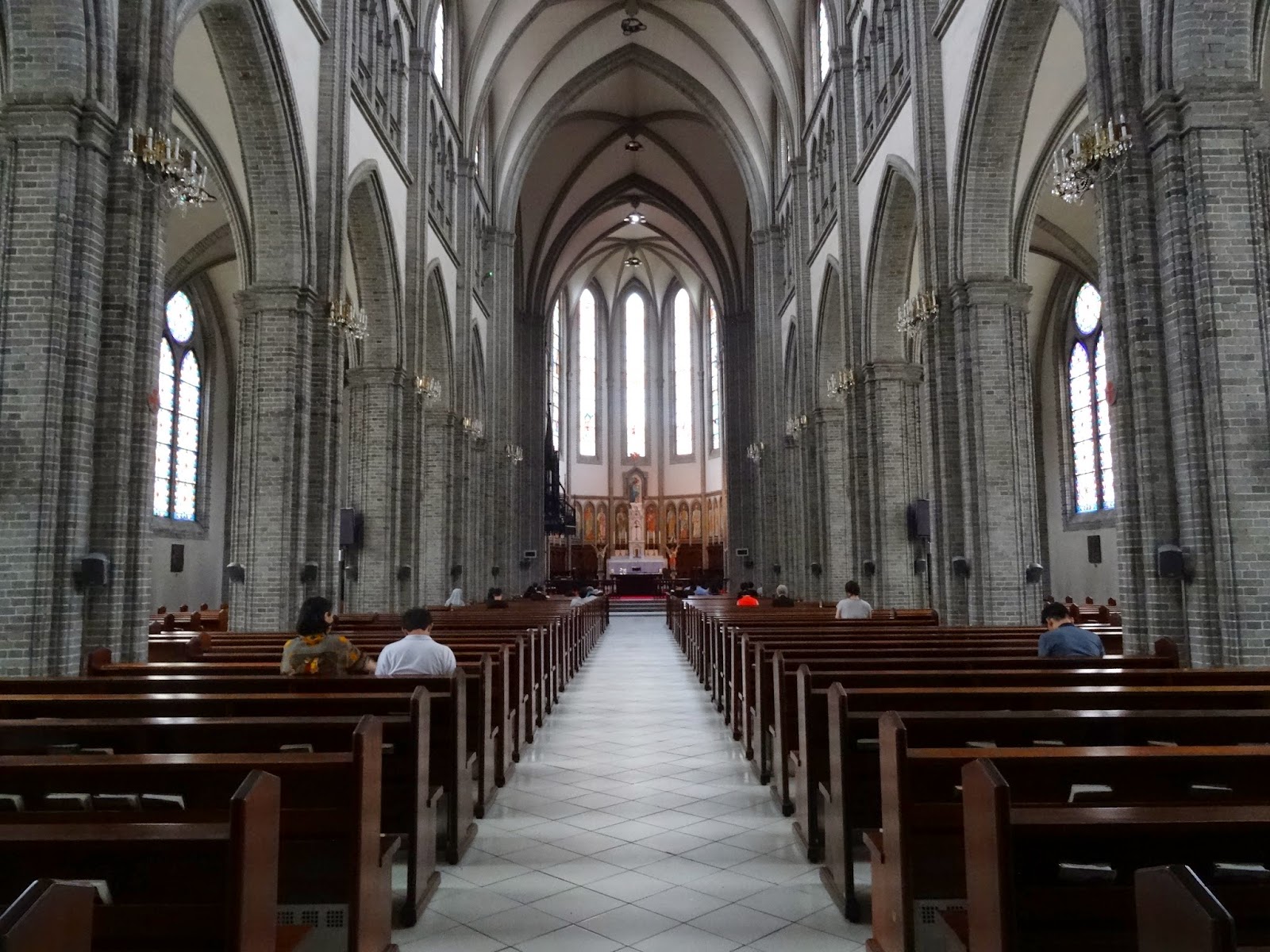 This interior shot of the cathedral looks like it could have been
taken somewhere in Europe rather than Asia, right? 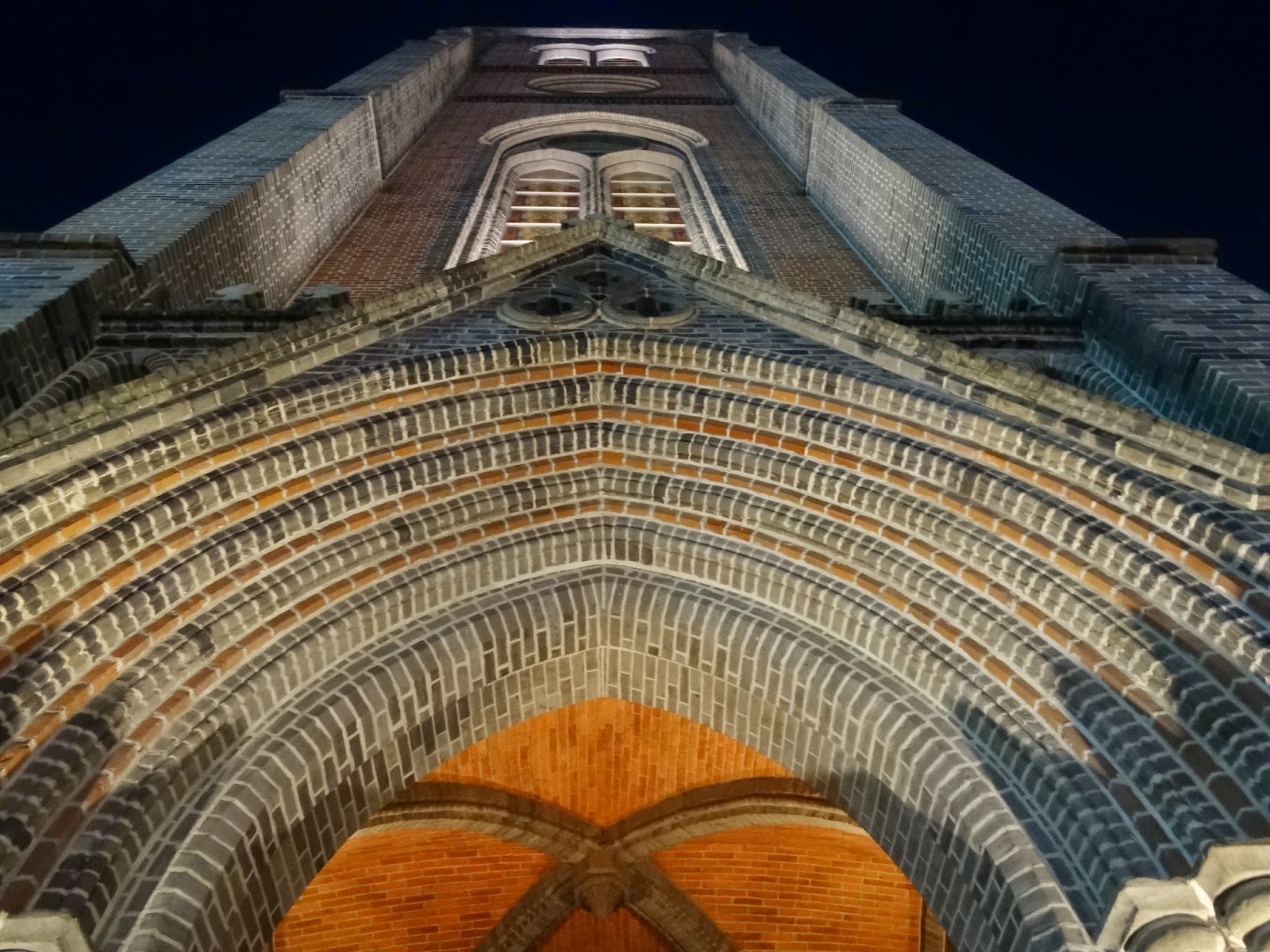 A visit to the cathedral after dark the next day yielded
more photographs whose looks I do like :)

On my previous two visits to South Korea, I had not thought to visit any religious building, Buddhist, Christian or otherwise.  This time around though, I figured I should go check out Myeongdong Cathedral at the very least, in large part because I was staying in the area (at the excellent Ibis Ambassador Myeongdong) -- and was so impressed by how the first ever Gothic style building erected in the country looked that I ended up visiting the place not once but twice.

Constructed in 1898 on the site where members of the Catholic faith had congregated as early as 1784, the cathedral was visited by Pope John Paul II in 1984 and Pope Francis last month. The largest building in Seoul at the time of its construction, it remains a popular place to pray in as well as visit as a tourist, to judge from what I saw on my own two visits to it.

Although South Korea may not be a country that most people tend to associate with Christianity in general and Catholicism in particular, Catholics actually constitute a significant part of the South Korean population.  So it stands to reason that early into my exploration into South Korean cinema, I'd come across a historical drama in which Christianity featured.
I have to confess though to having found The Uprising (1999) more puzzling than illuminating. And to judge from the reviews I've seen of this film (such as this one), the general consensus is indeed that it's not a particularly great film despite its subject matter being an intriguing one.
Ironically, the other South Korean films I've seen that prominently feature Christians -- including former Culture Minister Lee Chang Dong's heartbreaking Secret Sunshine (2007), Park Chan Wook's vampire movie Thirst (2009) and disaster blockbuster The Tower (2012) -- don't tend to depict them in the best of lights.
At the same time though, it's also notable that Christianity is depicted as very much a part of South Korean society in those films.  And that was indeed my observation too on this recent visit to the country.
Posted by YTSL at 1:33 AM

Good photos of this impressive cathedral. I recall photos of a cathedral from your past Hanoi trip, which does show that Western religion is a part of the history of these destinations...
In speaking of religion, this recalls an experience I had on Cheju Island on my one and only trip to South Korea.

I struck up a conversation with a Korean man who spoke fluent English. When we discussed religion I referred to Christianity as an "indoctrinating" religion. He became quite offended because he was apparently a devout Christian. Learning from this experience, I avoid discussing religion and if asked about it, I take the easy way out and say that I'm an agnostic!

Thanks for recalling the cathedral photos I took in Hanoi -- and yes, my visit to Seoul's Myeongdong Cathedral got me thinking of that one in Vietnam's capital city!

Re religious discussion: yes, best to avoid doing so with strangers -- and even certain friends and family members!