Beyond barbecue in Korea (Photo-essay)

There are many people who think primarily -- and maybe even only -- of barbecue when asked about Korean food.  And I have to say that the first two Korean dishes that appealed to me were indeed bulgogi and galbi (AKA kalbi).

But while I had plenty of grilled meats on my 2009 visit to the Land of the Morning Calm, my mother and I didn't have a single meal that centered on barbecue on this most recent South Korean vacation.  Instead, we ate a greater variety of Korean foods -- all of which was enjoyably delicious -- with our only non-Korean concessions being Dunkin' Donuts and Krispy Kreme treats for breakfast on three occasions! ;b 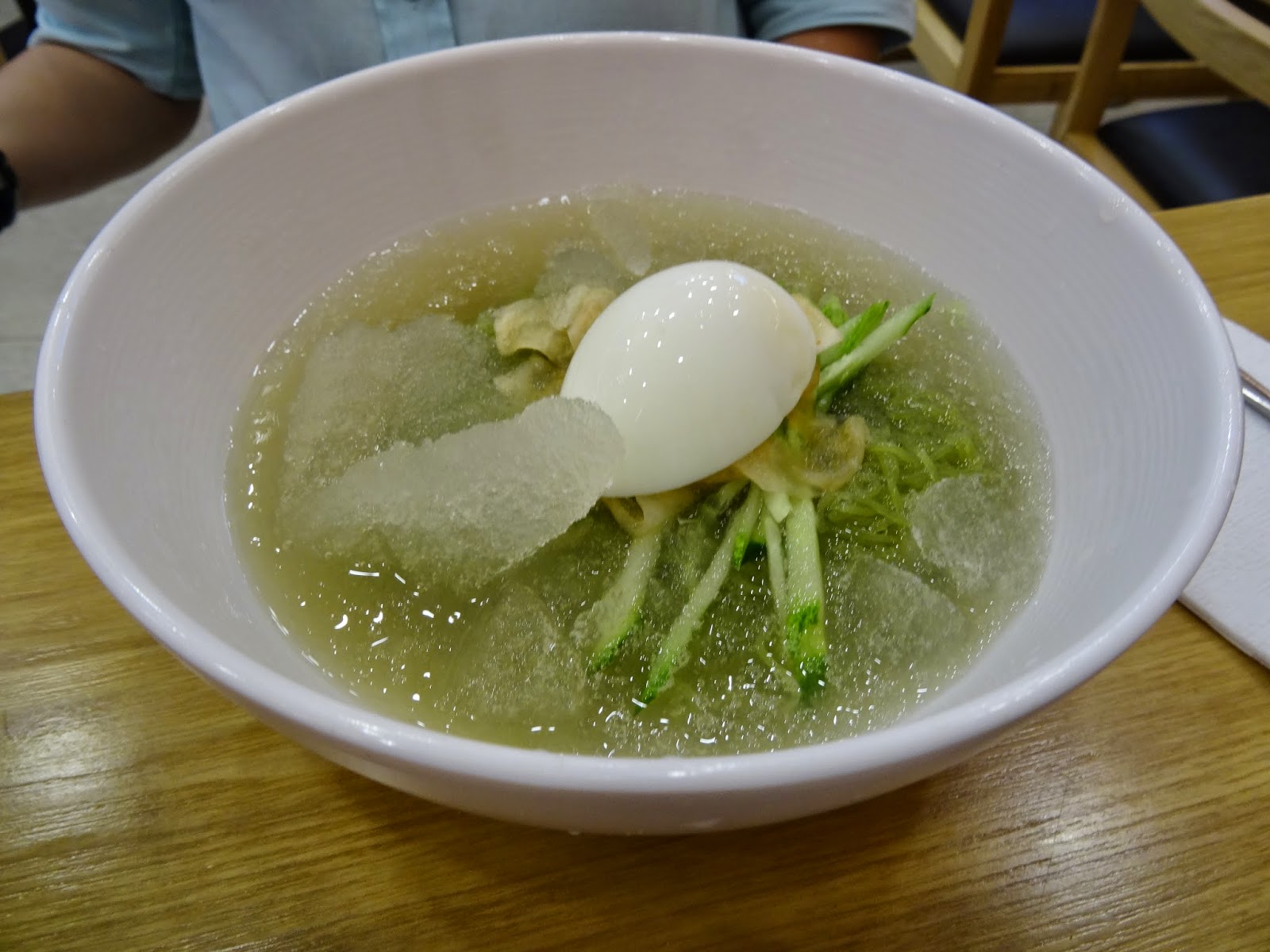 As it so happened, my first and last meals in Korea this time around
consisted of naengmyun (i.e., cold noodles) -- specifically,
the spicy dry version on day 1 and the icy soup version on day 6 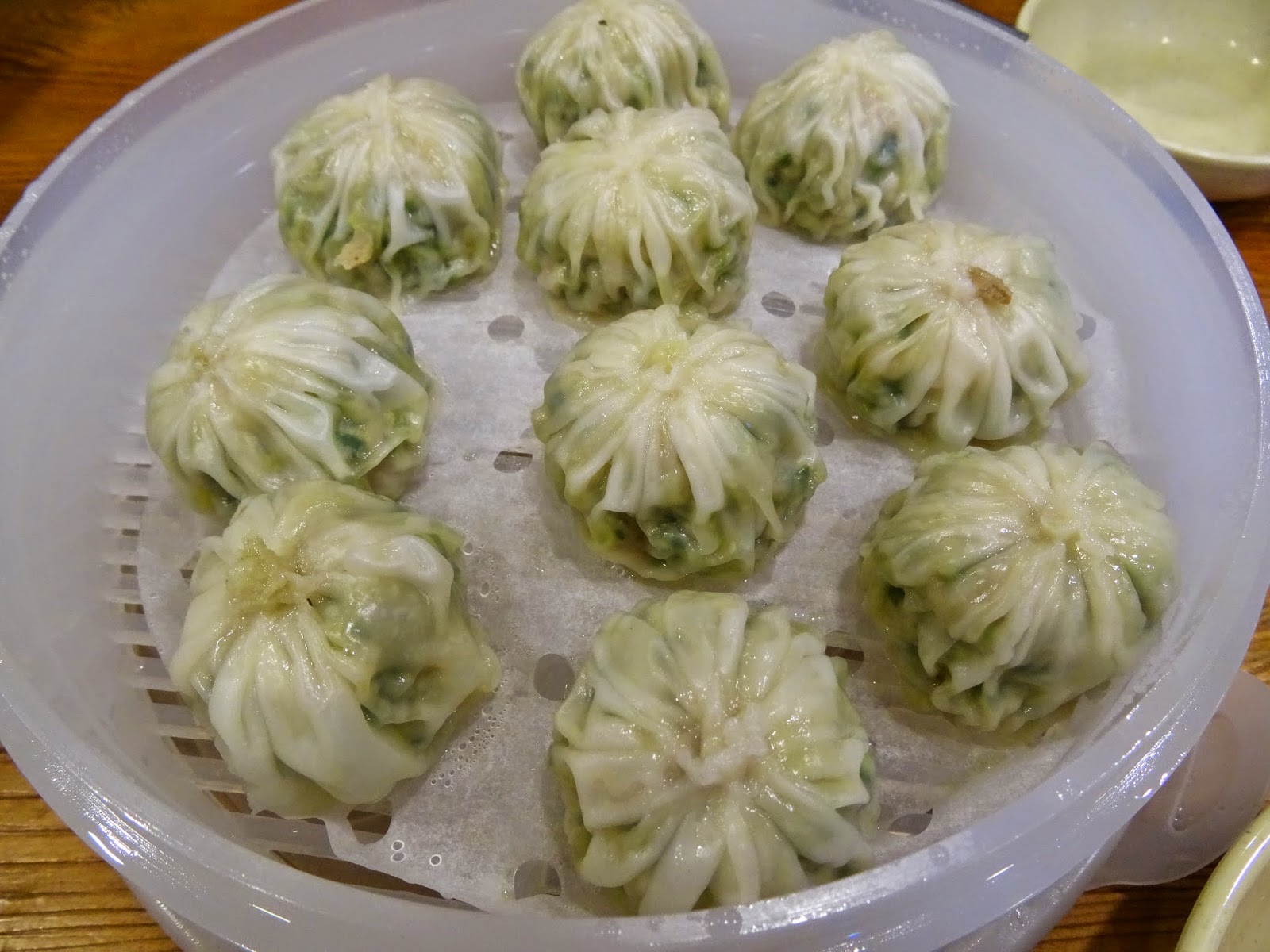 On day 2 of my vacation, my mother and I shared this dish
of mandu (dumplings) at the main branch of Myeongdong Kyoja
which my mother likened to xiao long bao without the liquid inside ;b 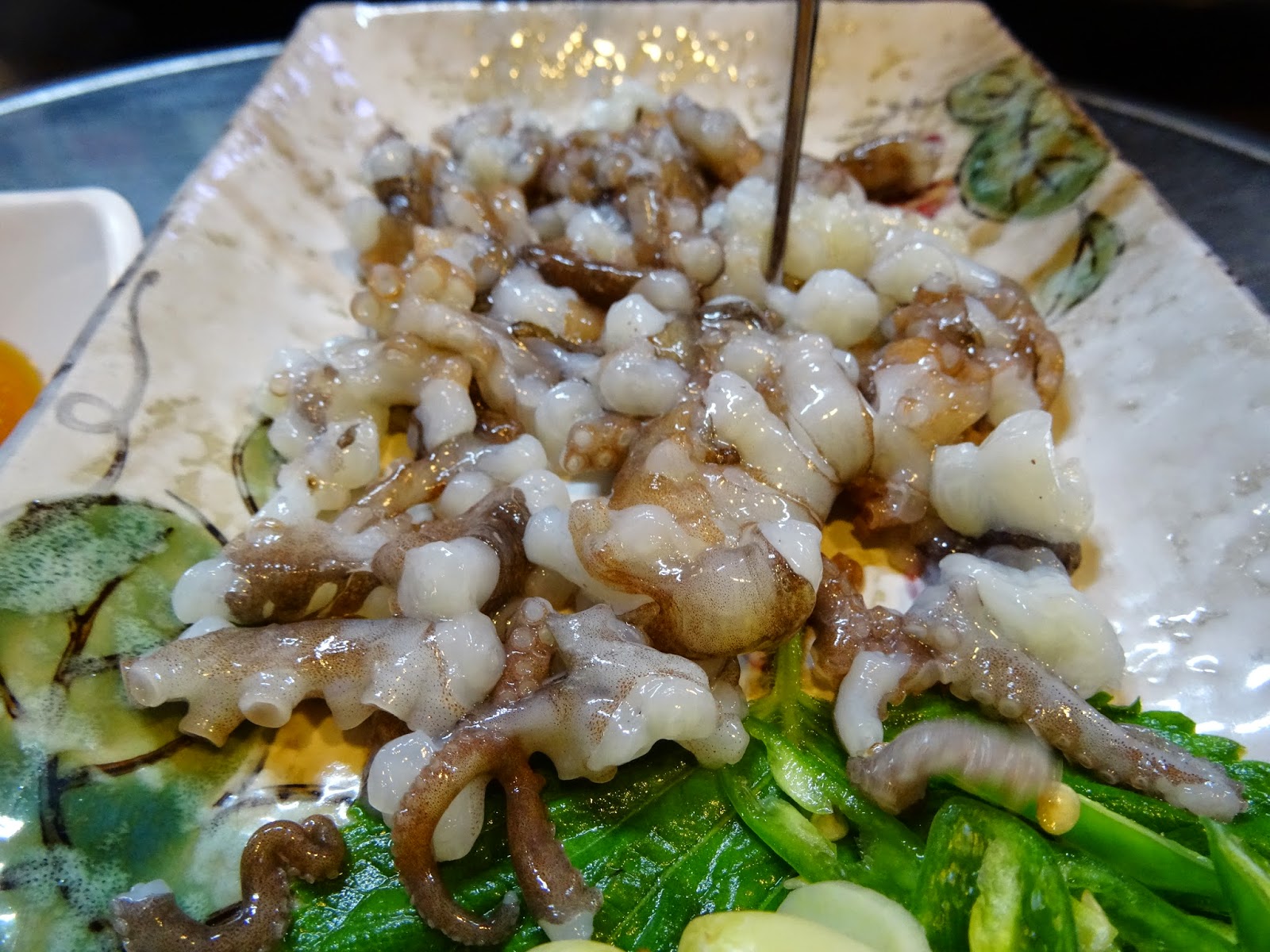 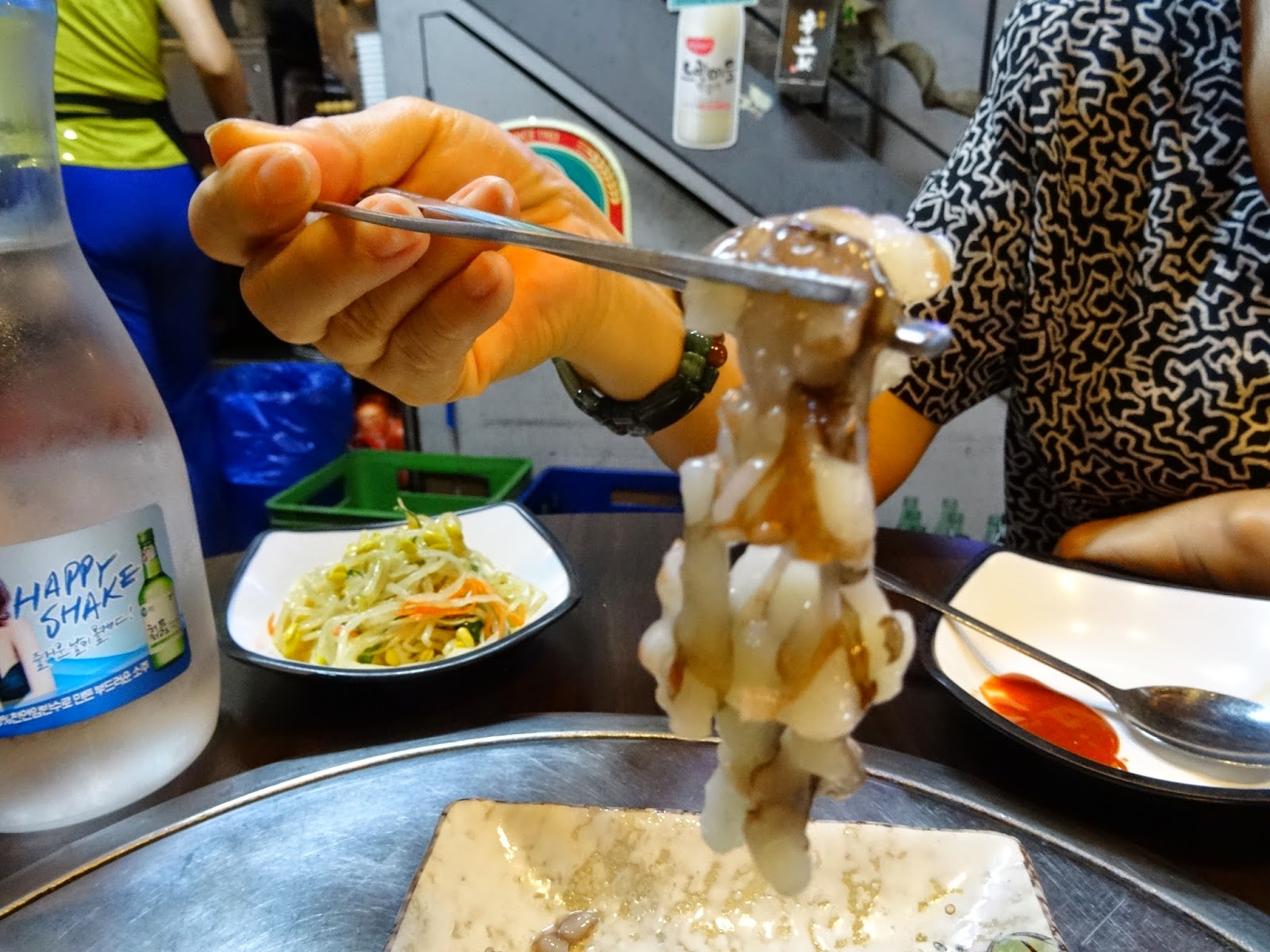 For the record, not only did these already dead octopus bits
move about still but they also had a tendency to stick together! :O 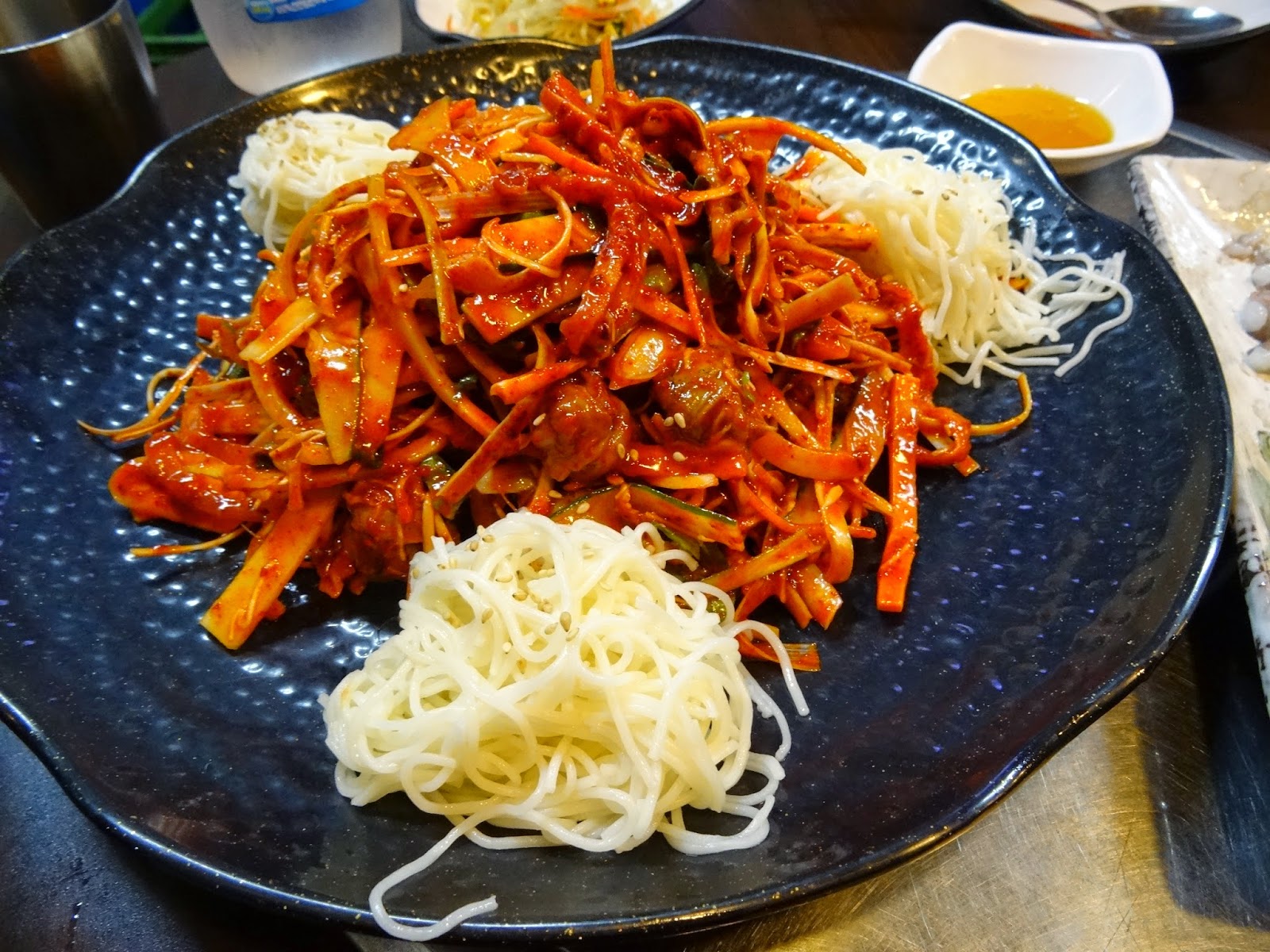 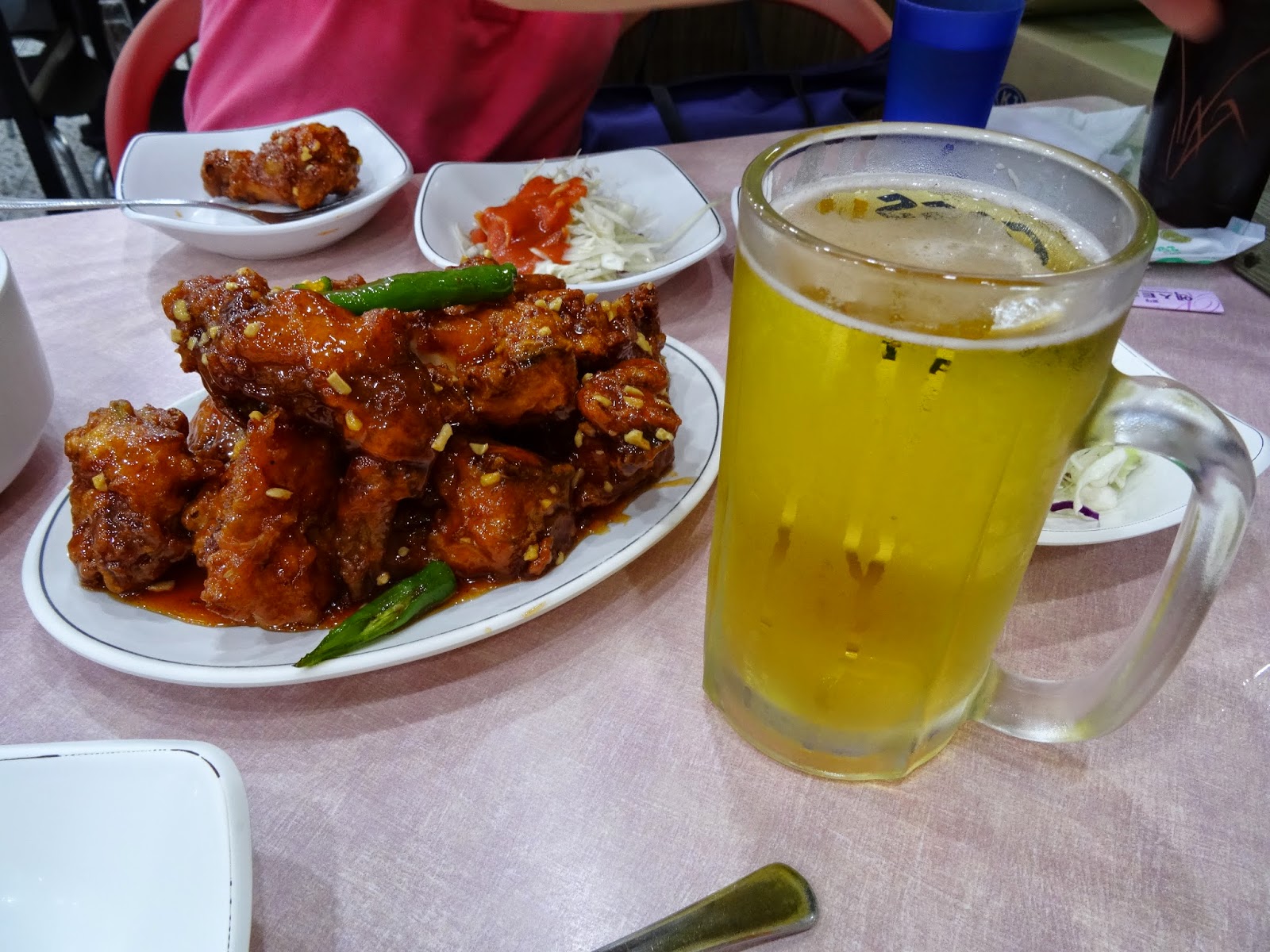 Dak Gangjeong (crispy fried chicken in a sweet and spicy sauce)
goes ever so well with beer, and was great to have at
the dish's birthplace - Incheon's Sinpo International Market 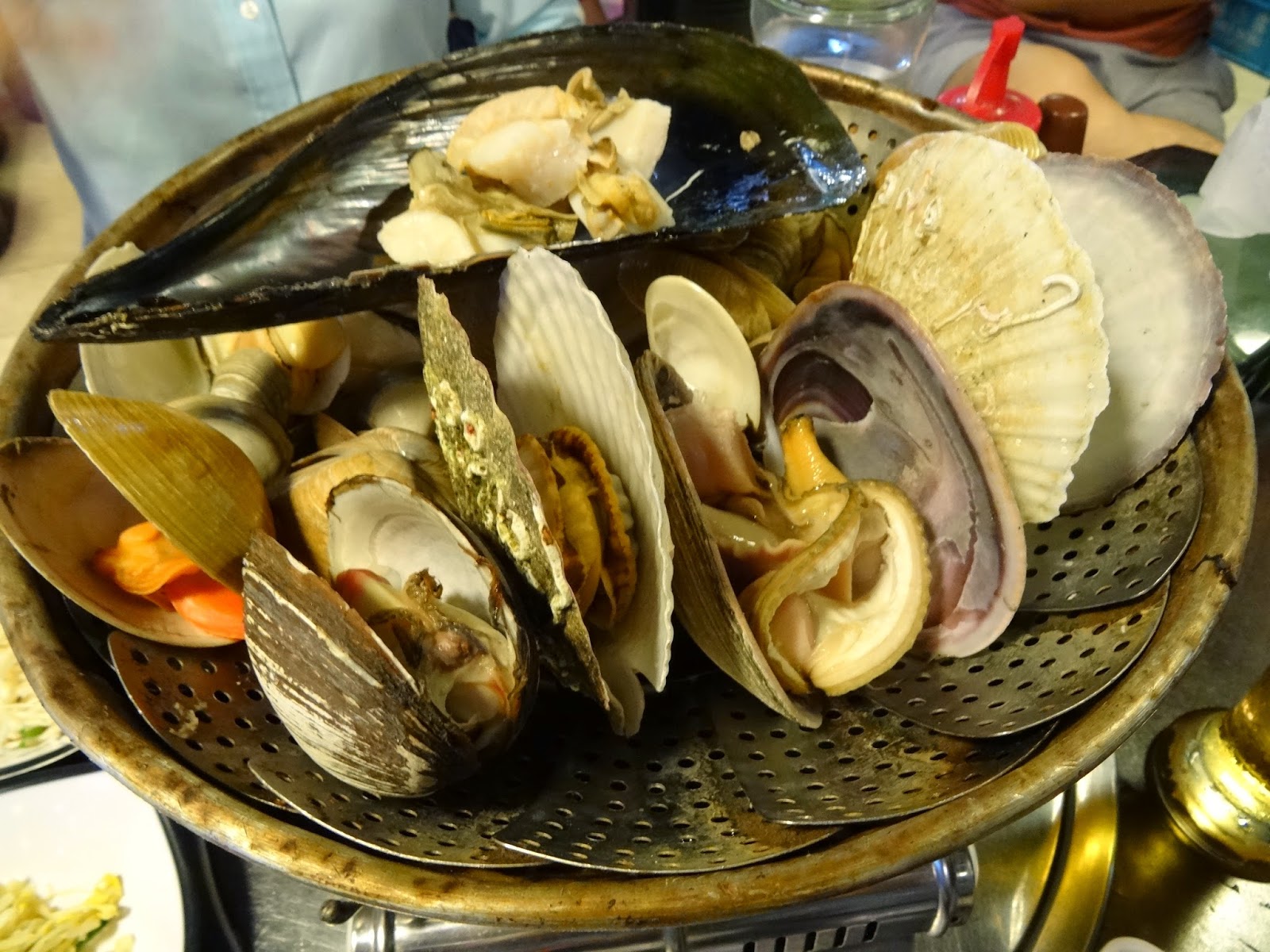 This pot of many and varied clams was quite the
culinary as well as visual treat! 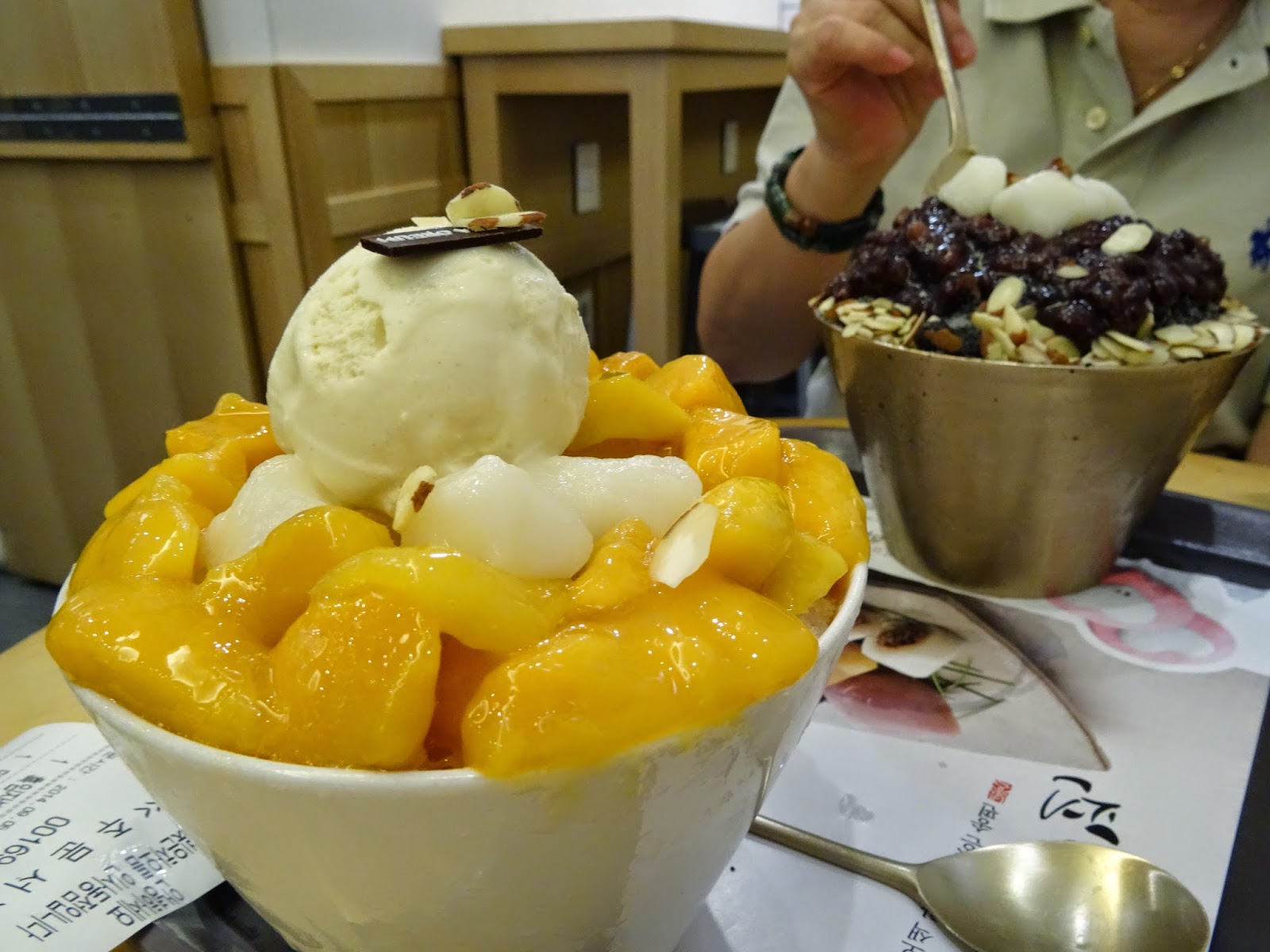 Since it was still pretty warm, we also had our share of cold desserts
-- with my favoring yummy smoothies and fruity shaved ice concoctions
(while my mother went for such as nutty shaved ice options) ;b
Posted by YTSL at 11:59 PM

The icy noodles are intriguing! Is there actually ice in the bowl in the top photo? (And is that an egg?)

Those giant bowls in the bottom photo look appealing. What sort of fruit was in the front one?

Once again, I find myself getting really hungry looking at your photos! I need to get to making dinner!

(I admit that I am a bit weirded out by the idea of eating still squirming--abeit already dead--anything...I'll take the noodles and ice cream!)

Yep, that's actually ice in the bowl in the top photo -- *and* half a boiled egg! ;b

Re the fruit in the giant bowls: I opted for mango -- and also got a few rice cakes, a scoop of ice cream and small bit of chocolate thrown into the bargain!

Re the dead but squirmy octopus bits: they were actually fairly tasteless. I guess one eats them for the texture and senastion! ;b

very tempting photos of Korean food, indeed! Now, to convince my two travelling companions to go for octopus sashimi! I hope to find some Korean fried chicken in Seoul.

Would your initials happen to be GSY, by any chance? ;)

Baby octopus sashimi is one of those things it's fun to say you had but I have to admit that the ones my mother and I had didn't taste much of anything!

And I'm sure you'll find Korean fried chicken in Seoul -- though I've noticed that in some places, they advertise it as baked chicken! :O

Everything looks so good. If I had to pick I'd take the clams, the dumplings, the chicken....well I guess I'd want to try everything.

Everything I ate on this trip was really tasty. If I had to choose just one dish though, it'd be the fried chicken. It was at least twice, even three or five times, as good as the Korean fried chicken I've had in Hong Kong -- and even that's already been pretty addictive! ;O