By and on the Seoul section of the Han River 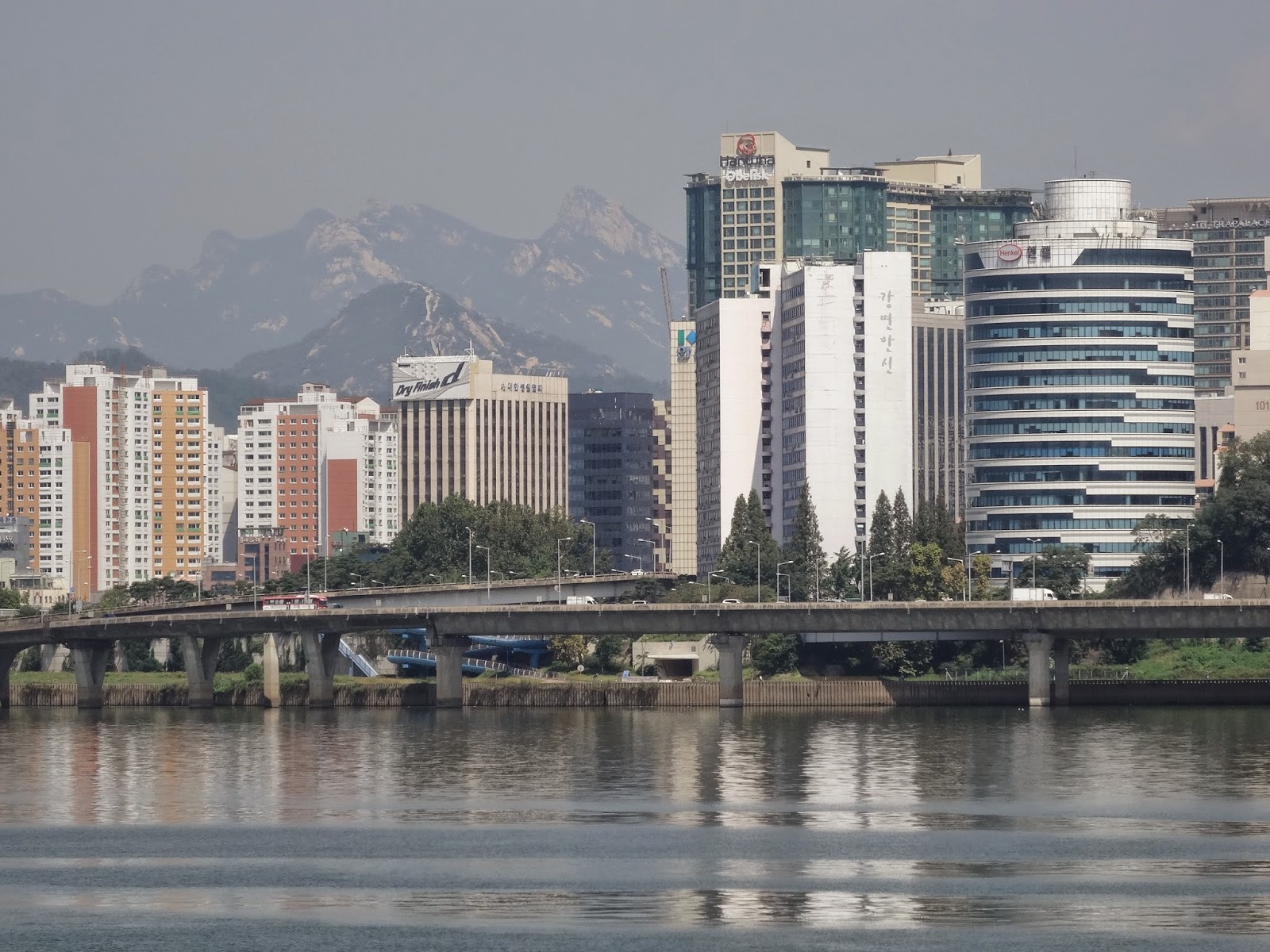 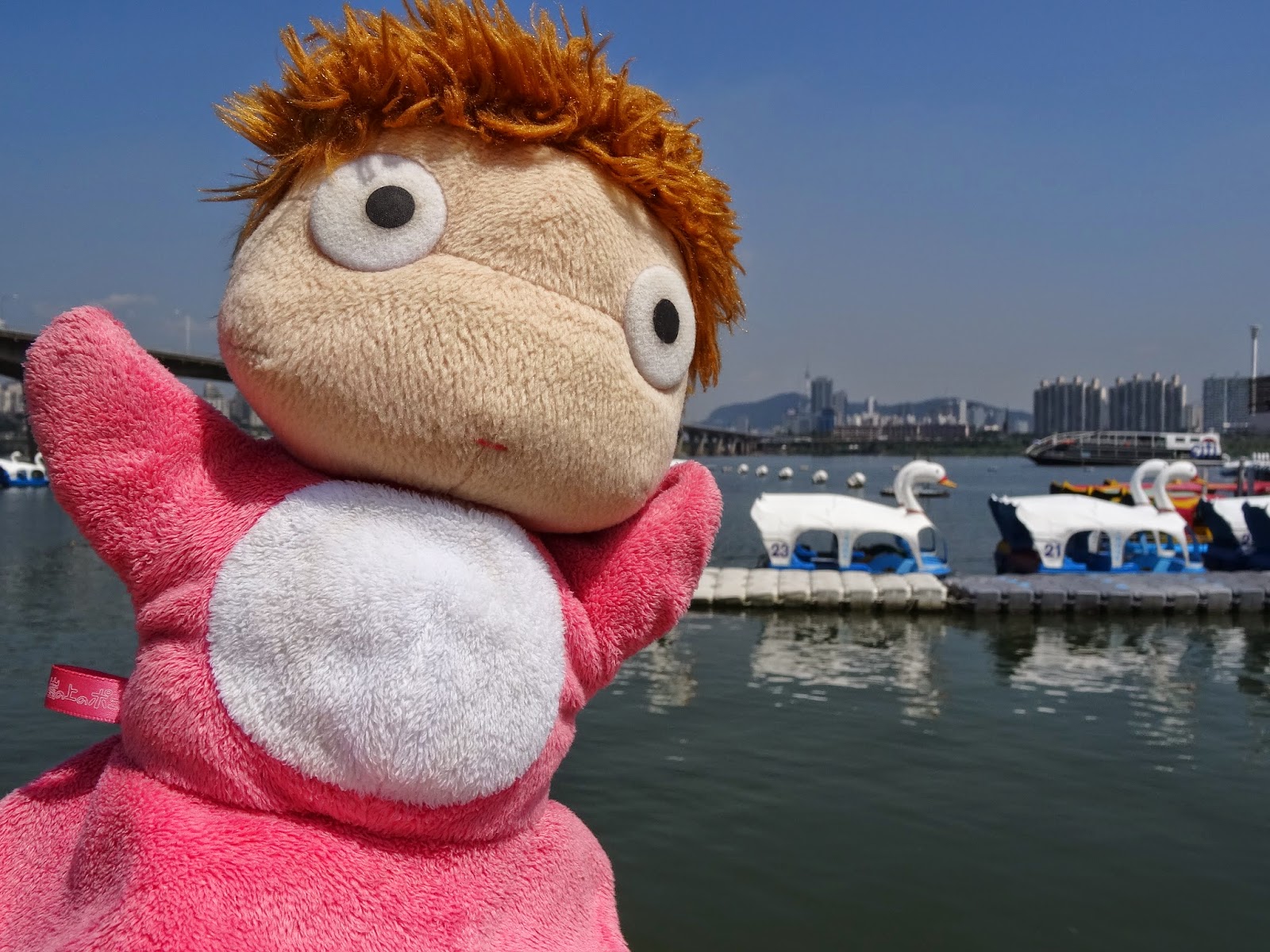 Puppet Ponyo was happy to see swan-shaped
paddle boats on the Han River! :) 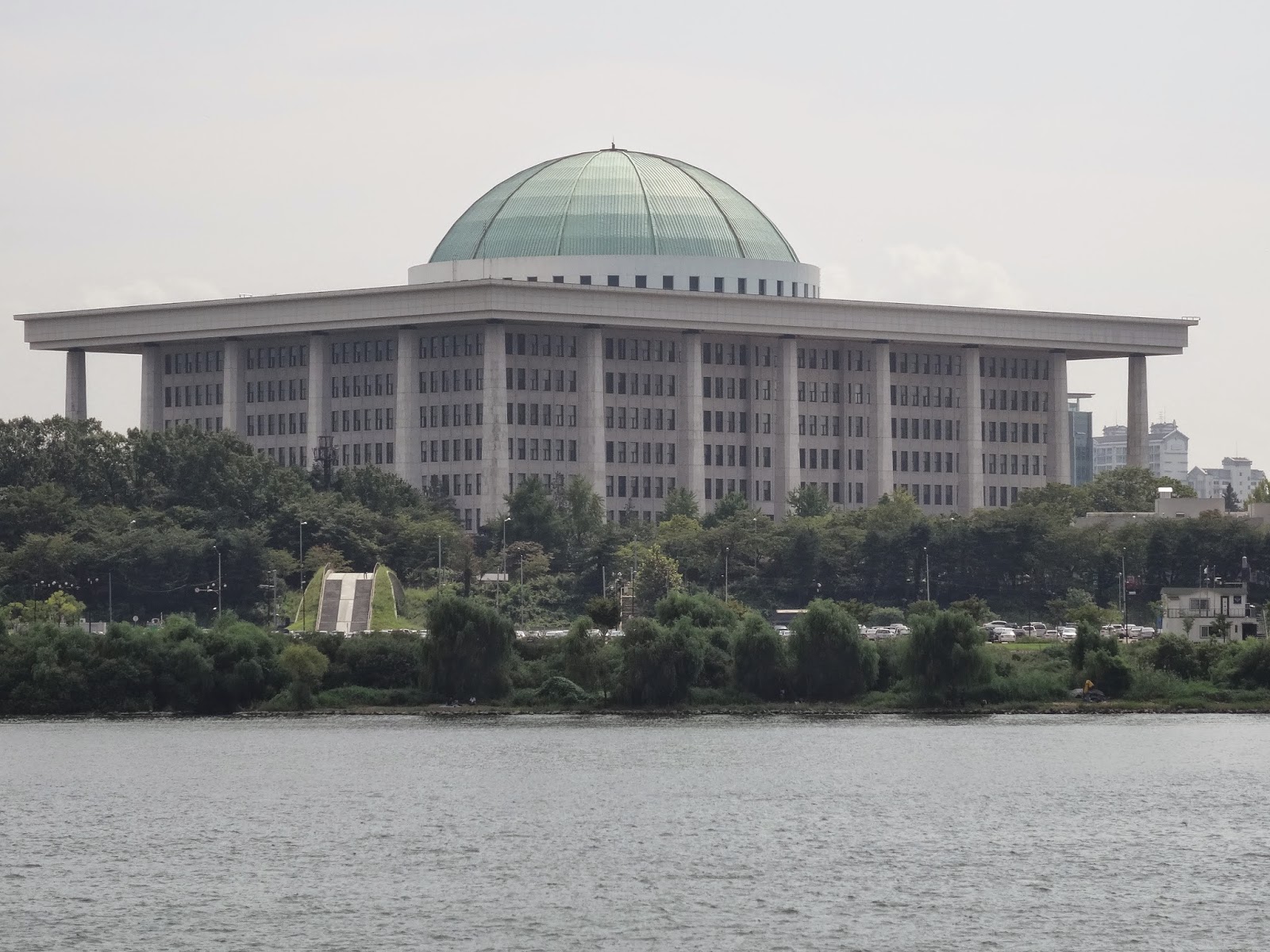 When my mother and I visited South Korea five years ago, the number one attraction for both of us was Seoul's wonderfully rejuvenated Cheong Gye Cheong Stream.  This time around, we set our sights on a cruise along another reuvenated body of water: the Hangang (i.e., Han River).

One of my most distinct memories of my first visit to South Korea back in 1982 involved driving along this very long -- and, to my mind, wide -- river.  Back then, however, I doubt that there were cruises taking place along it -- as, among other things, the Han River had a reputation for being pretty polluted for the first decades of South Korea's existence.

These days, however, the area around the now ecological jewel appears really pleasant -- with parks, bike and walking paths located along it that quite a few people appear to make much use of. And while the river's water wasn't as clear as I thought it should be, the cruise that my mother and I (and Puppet Ponyo too) went on was pretty nice -- with my only complaint being that its one hour length was too short since I'd have been happy to relaxed on deck, catching the breeze and enjoy watching the sights pass by for at least one more hour that sunny afternoon!
On a pop cultural note: I have to admit to thinking of Bong Joon-Ho's The Host while on the cruise, especially whenever we passed under and/or by one of the several bridges over the river. Also, while checking out Psy's Gangnam Style music video once more last week, I was amused to recognize a number of sights in it -- including the swan paddle boats! -- that we had caught sight of "in the flesh" less than two weeks ago now! ;b
Posted by YTSL at 8:45 PM

That particular photo of Puppet Ponyo was actually taken on the riverbank but yes, she did enjoy the river cruise -- popping up for more photos while on the boat. ;b

I like the top photo, especially the rugged peaks in the background. After reading your Seoul blogs and watching YouTube videos, Seoul certainly appears to be creating a quite livable 21st Century metropolis by developing her waterways.

The photo of Ponyo is one of her very best poses. I wasn't familiar with Puppet Ponyo (not even Miyazaki's film) until I discovered her on your site. Puppet Ponyo may not compare to the international marketing phenomenom of that kawaii feline, Hello Kitty. However, the photogenic Ponyo fits perfectly into my personal world of animism. Maybe it's the Hans Christian Andersen-Ponyo on the Cliff by the Sea connection, that gives Puppet Ponyo human qualities to what would normally be an inanimate object...Why, your photo could be a publicity still from Seoul of Ponyo's latest film!

Thanks for liking the top photo -- and yes, I like the rugged peaks in the background too.

And thanks also for your (continued) appreciation of Puppet Ponyo's appearances on my blog. Be assured that there are a few more photos of her in Korea to share! ;b