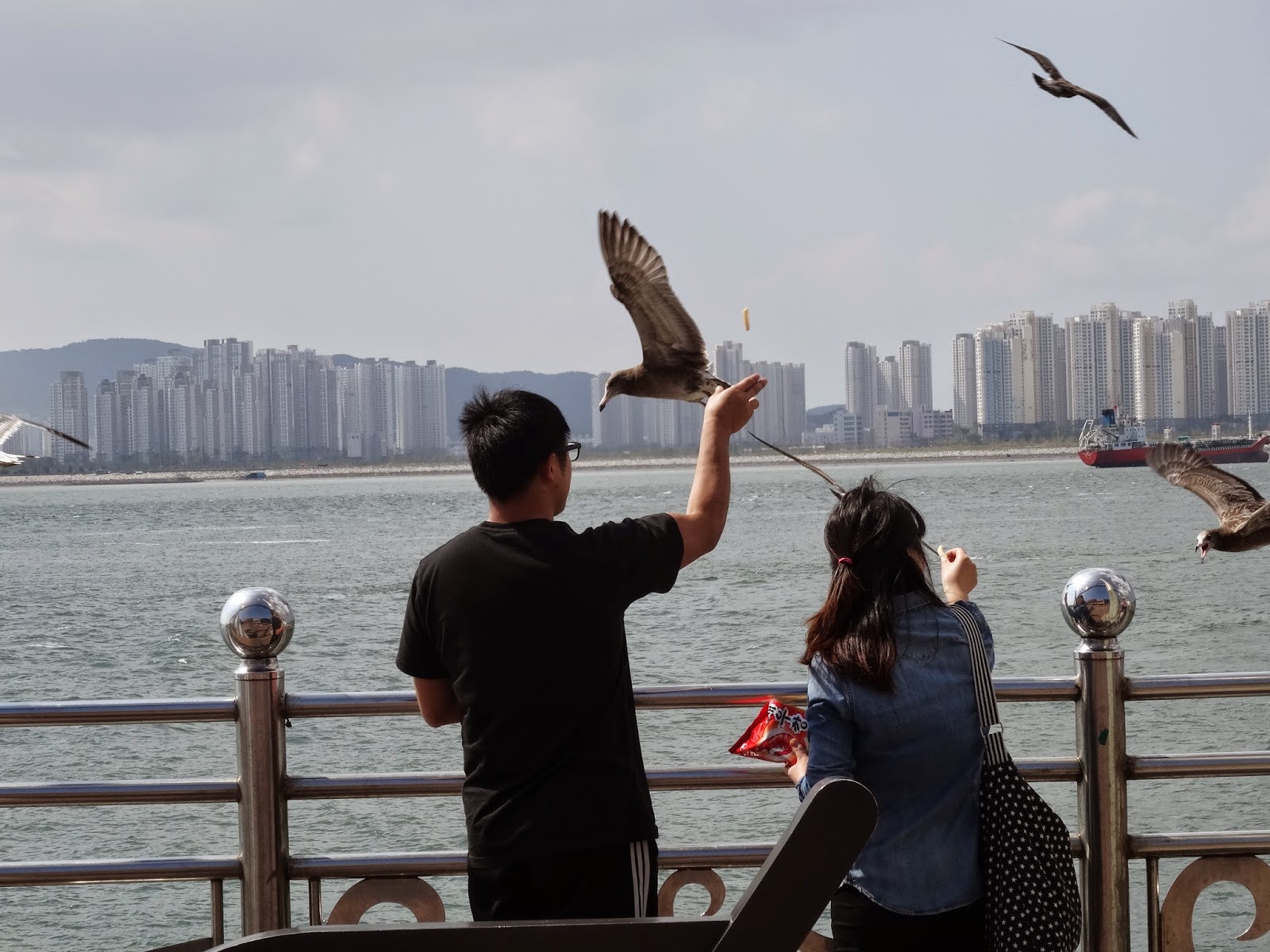 At Wolmido, the main attraction -- at least on the afternoon that
my mother and I visited -- appeared to be the seagulls! 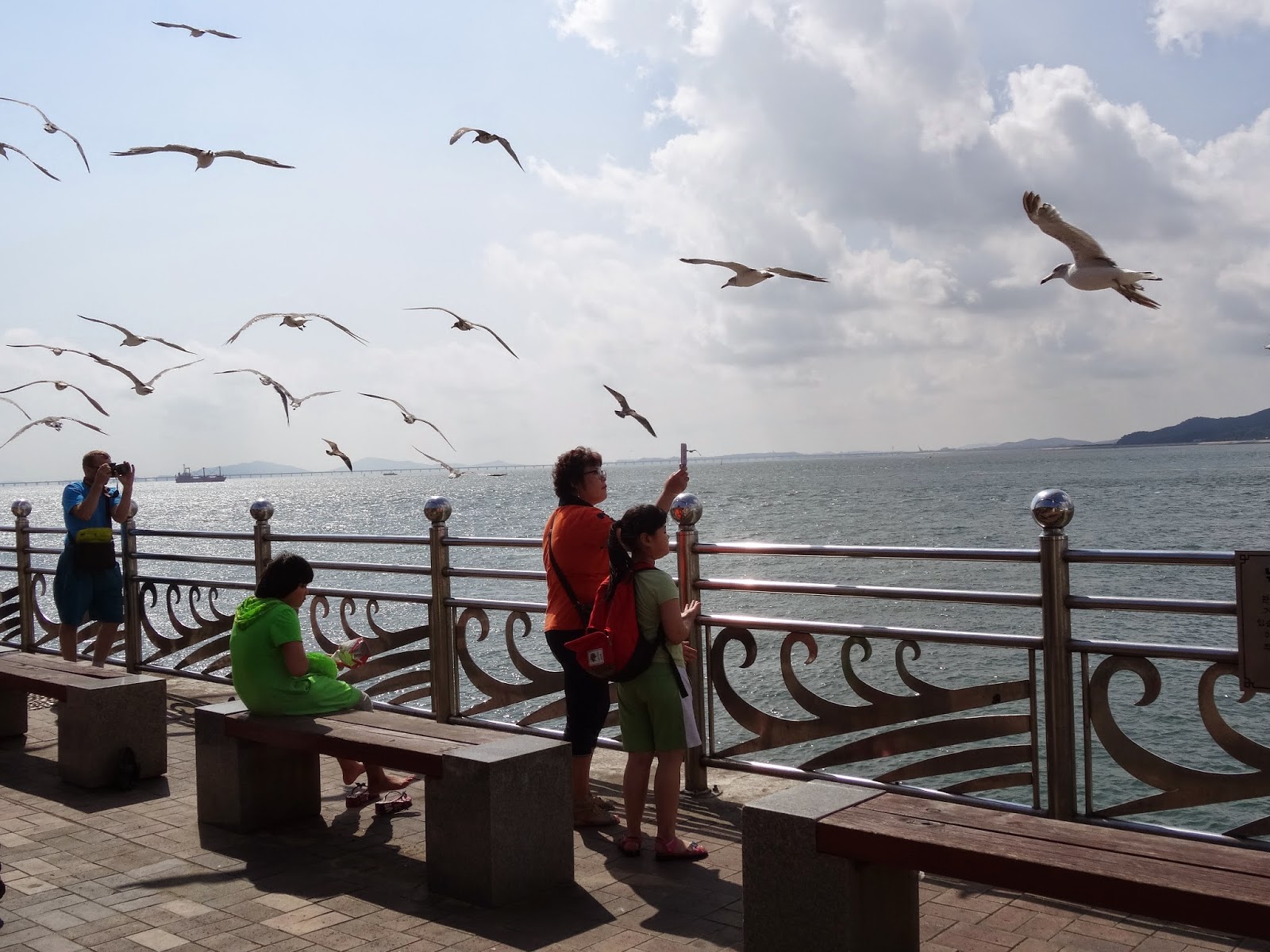 Visual evidence that there really were a lot of those birds about
-- and that I wasn't the only one taking photos of them! ;b 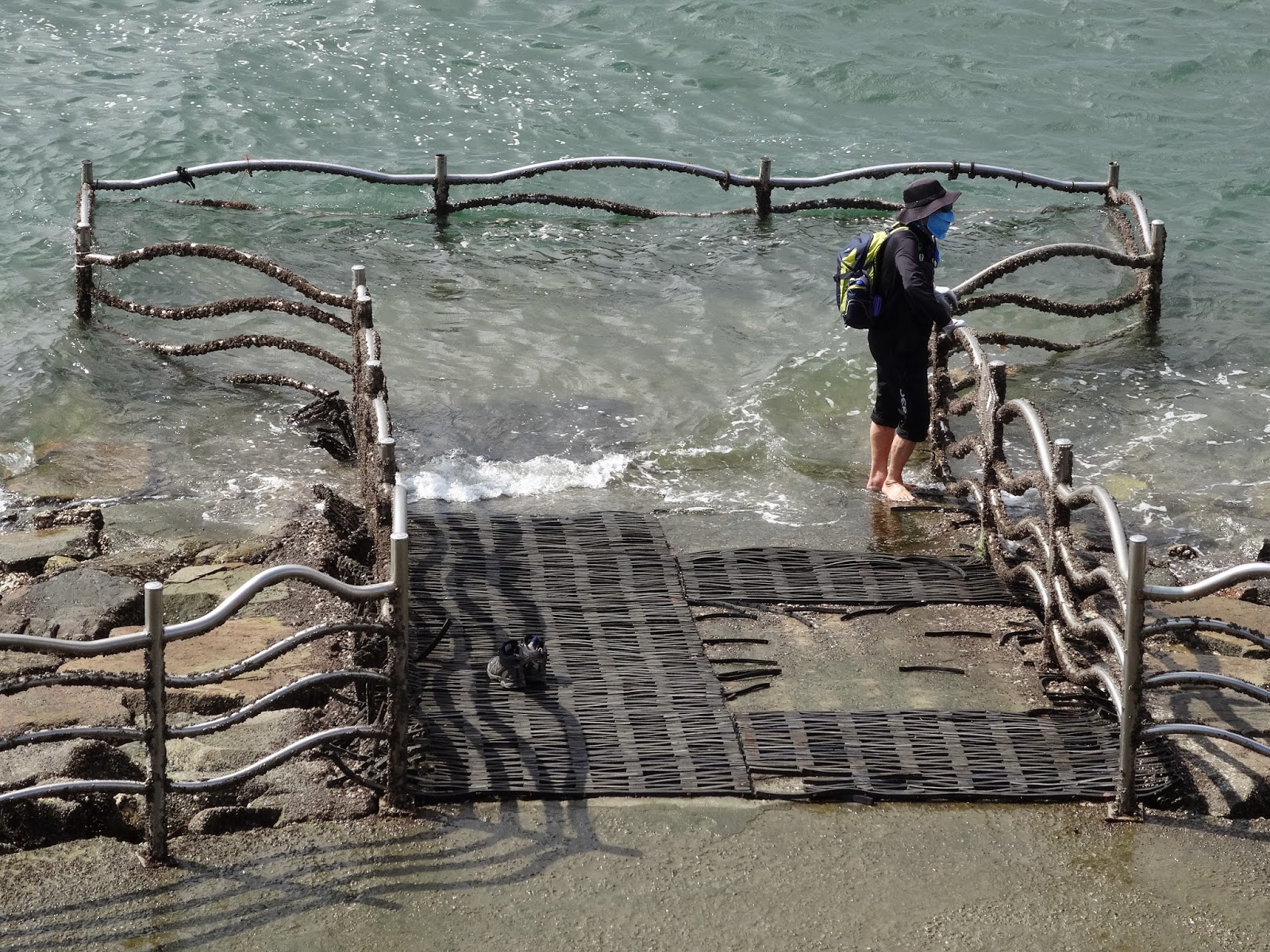 When the alternatives are dressing like a masked bandit and
dipping one's toes in an area that doesn't look all that safe,
you know there aren't all that many options about the place! :O

When my mother and I visited South Korea in 2009, we had made day trips to Suwon (where, among other things, I had checked out its UNESCO World Heritage-listed Hwaseong Fortress and Korean Folk Village) and also the De-Militarized Zone (DMZ)).  This time around, I had planned a couple of trips to the Incheon area but ended up spending just one day there -- in part because much of that day excursion had been rather underwhelming.


Take our visit to Sinpo International Market, a place which had sounded so very interesting in the article in the copy of the Korean Air Lines inflight magazine that was on the plane that took us from Hong Kong to Seoul.  While the fried chicken we had for lunch there was super delicious, the fact of the matter is that the rest of the market had looked pretty unexciting, and even dead -- especially compared to the bustling traditional markets that I take as a matter of fact in Hong Kong and Japan.  (And it in fact was later confirmed to me that traditional markets in South Korea are dying since many Koreans prefer to shop in modern supermarkets.)


Then, when we visited Wolmido, it felt like a sparsely visited seaside space that was trying to take cues from American seaside towns -- what with its having a boardwalk of sorts in place and also a couple of amusement parks: one with several "Viking"/pirate ship rides that I was loath to ride (for fear that they would make me throw up); and the other with a large ferris wheel that my mother feared would be too hot to ride on under the hot afternoon sun.


And while Wolmido's famous for its hwe (Korean-style raw seafood), our large (by our standards, though only medium by Korean ones) fried chicken lunch made it so that we weren't attracted to check out any of the island's many hwe restaurants.  In addition, it turns out that the day of the week that we visited (Thursday, for those who want to know) just happened to be the very day of the week when the ferries we had hoping to ride on weren't running!


So as far as Wolmido was concerned, my mother and I had to pretty much content ourselves at strolling about along its seafront and doing such as gawp at the seagull feeding frenzy instigated by a couple of tourists offering up such as crackers to those birds! And worse was to come as when I tried to salvage the day by asking the woman manning the Wolmido Tourist Information center for alternative suggestions, we ended up going on a wild goose chase all the way to Yongyudo Island in search of a quay whose stop, most unfortunately, was one of those not announced in English on the bus that we directed to take there!


Granted that the over one hour bus ride from Wolmido to Yongyudo was pretty interesting in that it took us from an area whose architecture made it look like small town America through to a built up city and its factory zone to Incheon International Airport and then to a rural space with overgrown foliage and mudflats rather than actual beaches and surrounding water.  And I do get the feeling that it was more interesting than a visit to Incheon's Chinatown would have been for someone who currently lives in what could be described as one big Chinatown!

Still, when the visual highlight of the day involved seagulls, I have to say that I found our Incheon excursion to be on the disappointing side; this no thanks either to the deceptive publicity photos and tendered tourist information that was much less exemplary than in many other places I've been in recent years, notably neighboring -- and so much more helpful -- Japan.  And it's really only thanks to the to-die-for Dak Gangjeong I had at Sinpo Market's Sinpo Cham Dak Gangjeong restaurant that I don't consider Day 3 of this recent Korean trip to be an outright touristic disaster! ;(
Posted by YTSL at 10:47 PM