Pupper Ponyo and friends at the COEX Aquarium! 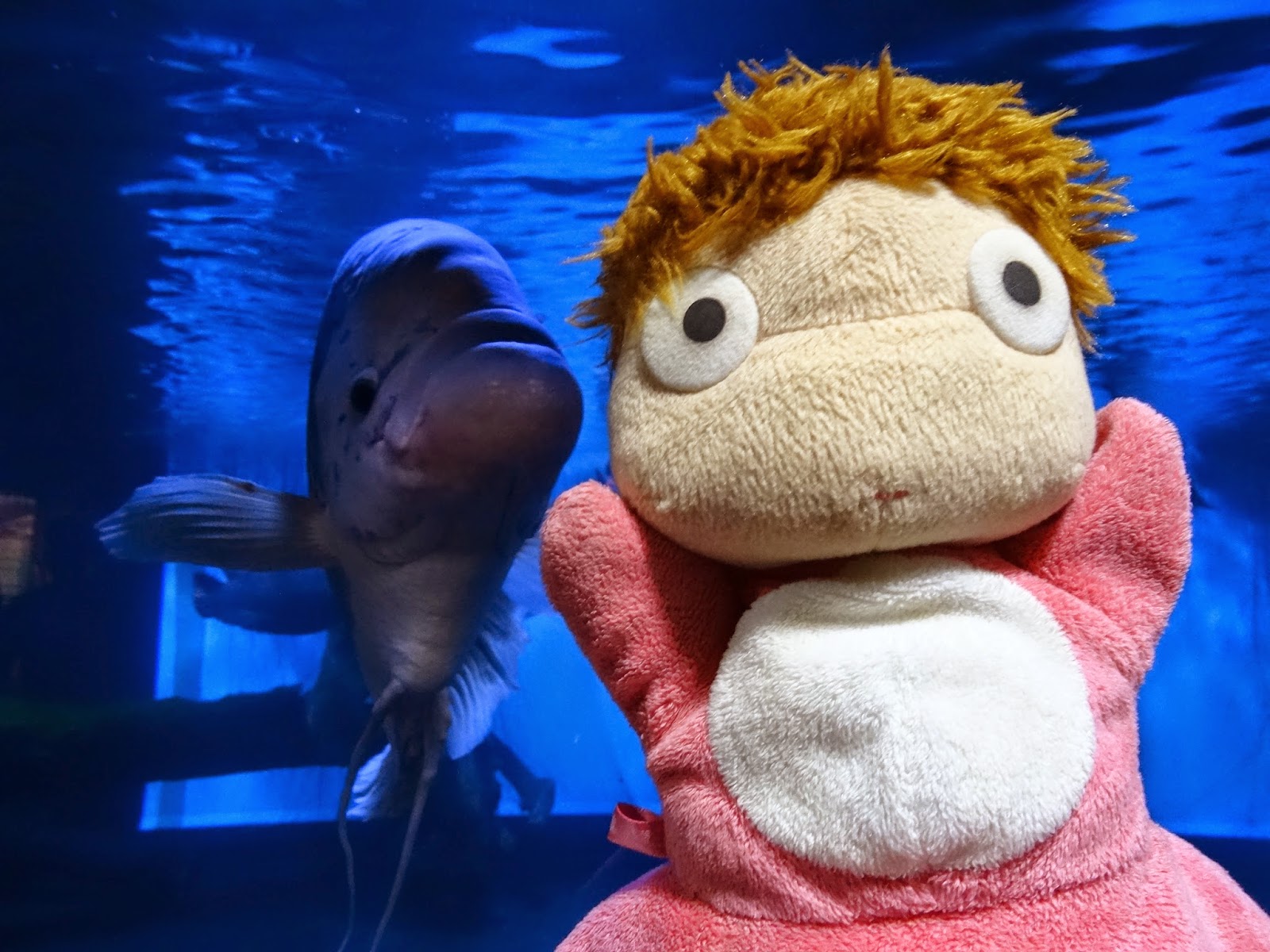 Do you get the impression too that the fish in the picture
wanted to befriend Puppet Ponyo? 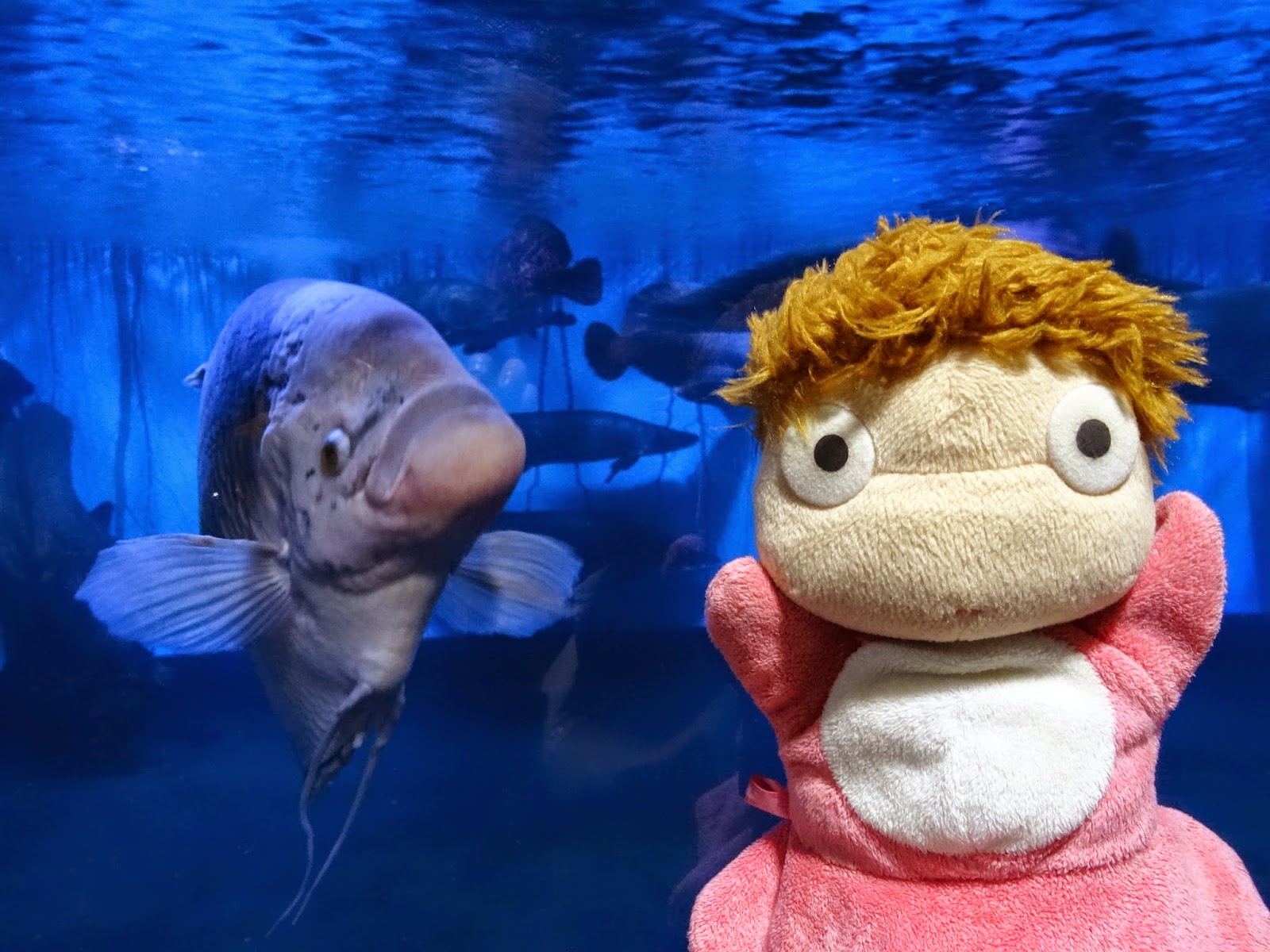 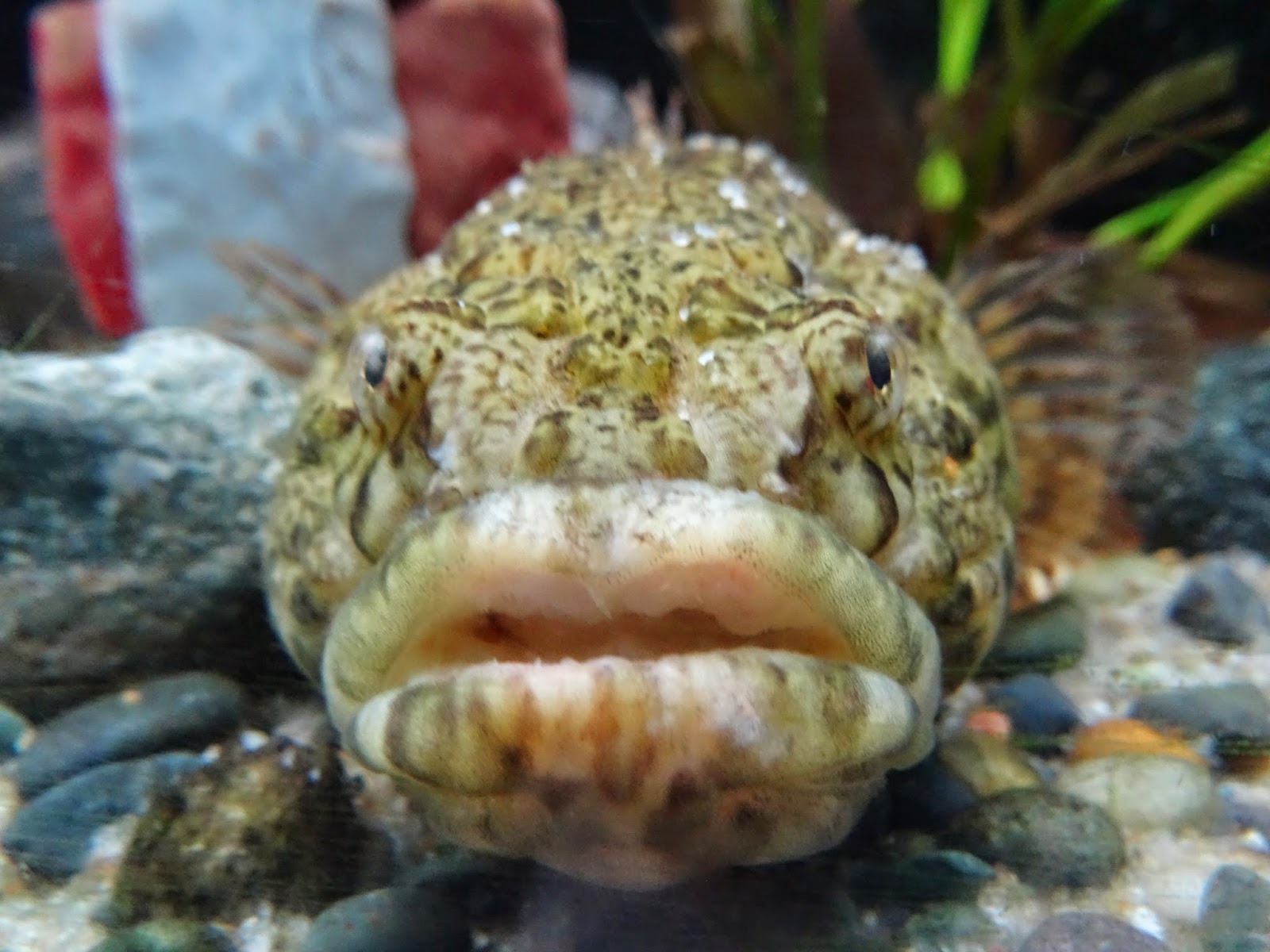 I get the feeling reactions to this fish will be split
between those who think it's super ugly and
others who think its lips would be great to eat! ;D

More than once on my recent South Korean vacation, I found myself in an underground shopping mall.  But while the Myeongdong undergound mall near the hotel my mother and I stayed at, and the Incheon underground mall that linked to the closest subway station to Sinpo International Market (where we had had the awesome Korean fried chicken) came across as unattractively low end, the COEX Mall located a stone's throw away from the impressive Bongeunsa was an entirely different proposition.

Not that my mother and I did any shopping there, mind!  Instead, we headed there after our Bongeunsa visit for lunch -- at a restaurant serving Korean food (my mother had more naengmyun while I had a plate of spicy squid and rice) where we were mistaken for Japanese people and thus had the server speaking Japanese to us, thereby giving me the surreal experience of hearing naengmyun referred to as soba and my dish referred as as ikadon!

After our satisfying lunch, my mother and I decided we might as well check out the mall's aquarium since we were already in the complex.  If truth be told, we didn't have particularly high expectations for the COEX Aquarium -- and our first impressions of the facility was that it was on the amateurish side.

The deeper we ventured into the aquarium though, the more we (and Puppet Ponyo, who popped out every once in a while from my backpack, too!) liked it -- finding some of the designs of the displays to be pretty innovative.  (I especially liked the part where they made it look like fish were swimming in such as a telephone box and drinks vending machine, and the section where one could have one's hands cleaned by "doctor fish".)

Also of interest was the aquatic life on display -- with some scary creatures, other fascinating ones, and still others that I frankly found super cute!  The usual suspects, such as crocodiles, whales and penguins were there -- but so too were such as manatees, a greater variety of eels than I knew existed, and a whole bunch of fish which eyes I found beautiful and also disconcertingly human-like!

And yes, I have to admit it: whereas I used to laugh at those Japanese I heard uttering "oishii!" (delicious) exclamations in aquariums (like those in Osaka and Okinawa), I go to thinking that too about certain of the creatures I caught sight of at this Seoul facility!  In particular, I was moved to imagine how tasty the thick lips of certain fish would be and how fantastic a meal certain Japanese crabs' super long legs would have made and, when looking at the eels, wonder how something that was so delicous could look so horrifying! ;D
Posted by YTSL at 8:12 PM

Hi YTSL -- The middle pic of the fish is lots of fun -- so photogenic!

You mean the photos with Puppet Ponyo and her friend? ;b

Looks like Puppet Ponyo was enjoying herself at the aquarium and perhaps has an admirer now..The fish in the last photos has that "so ugly but somehow cute too"look. Eating it's lips never occurred to me but seeing if there was a plush of it did.

Oh, I think Puppet Ponyo has many admirers -- including blog visitors like you, Bill and Trekcapri! ;)

And oh my re your wishing there were a plush like that fish in the last photo!! :O

You certainly saw a variety of sights during your latest Seoul vacation and have been generous in the number of poses you've given to Ponyo...In the first photo, the fish seems to be scrutinizing Ponyo with intense curiosity and yes, it would probably like to "befriend" your star plush...In the photo beneath that, the fish is unquestionably interested in Ponyo, and Ponyo appears a little perplexed at the fish's advances, as she looks into the camera...With Ponyo so prominent in the foreground, the fish occupying the middleground, and the background fishes against the blue screen backdrop of the water - these are good photos that have a lot of three dimensional depth.

Definitely re seeing a variety of sights during my recent vacation -- and re Puppet Ponyo: there was one day (the day when my mother and I went to Incheon) when I forgot to take her out of my backpack, and after that, I determined to make sure that another day wouldn't go by without her being in a photo!

Re the photos of Puppet Ponyo at the COEX Aquarium: I like your assessment of what was happening in those photos! ;b