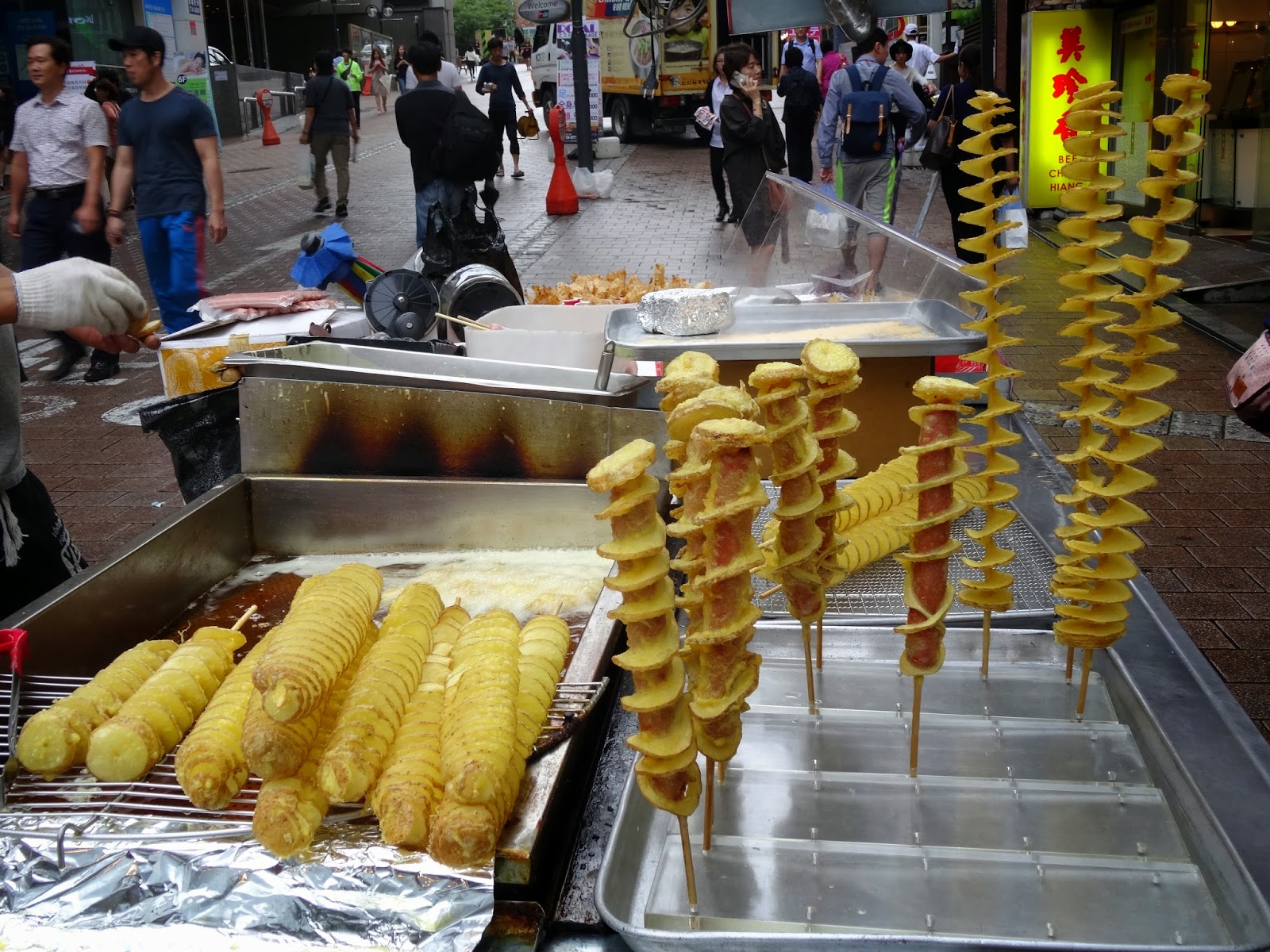 In the land of crazy food (yes, those are sausages and
chip combination concoctions there!)... 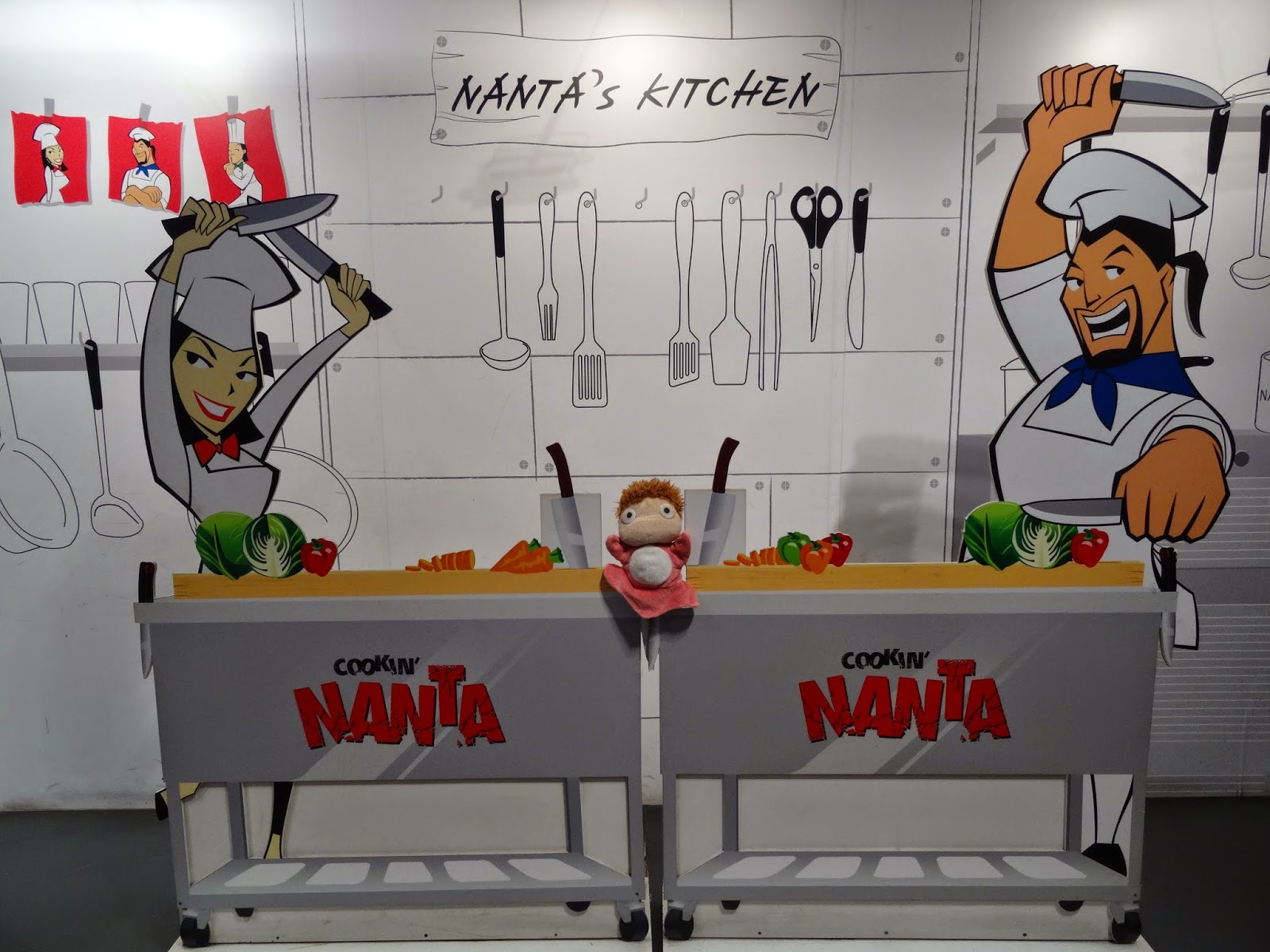 
A few months ago, I went with my mother and a friend to see Jump!, a martial arts-themed physical comedy theater show that had travelled from South Korea to Hong Kong.  Based on my experience of having viewed that show and another similar styled one in Hong Kong's Detention, I figured that my mother and I also would get much out of checking out the granddaddy of these shows, one which has been running since October 1997 -- South Korea's Nanta.


On my 2009 visit to South Korea, I had seen ads for Nanta but had assumed that tickets needed to be booked way in advance for it.  But as I found out on my most recent vacation, if you purchase the tickets directly from the Nanta box office, you can only get tickets for the performances from 1pm of the very day of the show that you want to see!


Upon purchasing our tickets, my mother and I settled ourselves into the seats of the Myeongdong Nanta Theatre and got ready for what turned out to be a super entertaining show that combined elements of physical comedy, skillful acrobatics, magic tricks, audience participation and the distinctive Korean percussion music known as samul nori.


South Korea's most popular show has a simple plot involving four chefs (one of whom is parachuted into the kitchen by way of his being the nephew of the restaurant manager) tasked with preparing a large number of dishes for a wedding banquet in the space of just one hour.  From time to time, they have to contend with the demands of the bad-tempered manager but mainly the quartet interact each other -- in ways that emphasize their distinct personae (of occasionally crazy senior chef, cute female chef, goofy younger chef and the new chef who needs to prove his worth to the others) and allow for lots of comic routines and relief.

Even while we laughed at the characters' slapstick antics though, we also couldn't help but marvel at the amazing abilities of the talented actors (and one actress) in this ultra fun show.  Not only are they adept comedians (with fantastic comic timing) but they also are able percussionists and possess knife skills that I think many actual cooks and chefs would be proud to have!  Oh, and the 20-something year old fellow who was the youngest of the performers also had amazing abs and a handsome face in the bargain!!

And for those who're wondering: you really don't need to know any Korean to enjoy a performance of Nanta -- or, for that matter, Jump. (And it's also the case that you don't need any Cantonese knowledge to have fun checking out Detention.)  This is not least because the show's 99% non-verbal... with far more beautifully rhythmic percussion sounds heard -- and physical gestures utilized -- than any actual words. :)
Posted by YTSL at 11:41 PM

It sure was! And although the 70,000 Won (each) tickets were by far the biggest splurge that my mother and I went for, it was worth it, we reckon! :)