According to statistics on religion in South Korea that I've seen: close to half the population of the country don't adhere to any religion; there are more Christians than Buddhists in the country; and Seoul is the part of South Korea that has the most people who formally belong to a religious group.

Interestingly, this fits with my impressions of the country in that: a) it wasn't until my third visit to South Korea that I thought to think of visiting a religious establishment there; b) I spotted more Christian churches about than Buddhist temples; and c) when I did finally visit a couple of religious establishments in Seoul, I found them frequented by more devout devotees than I had expected would be the case.

And while I found Myeongdeong Cathedral pretty visually impressive, especially inside, I have to say that the Buddhist templex complex of Bongeunsa was far more picturesque to my mind -- with the result that I took far more photos in its grounds that at the Roman Catholic cathedral and it's with the greatest difficulty that I narrowed my choices down to just eight photos to share in this photo-essay:- 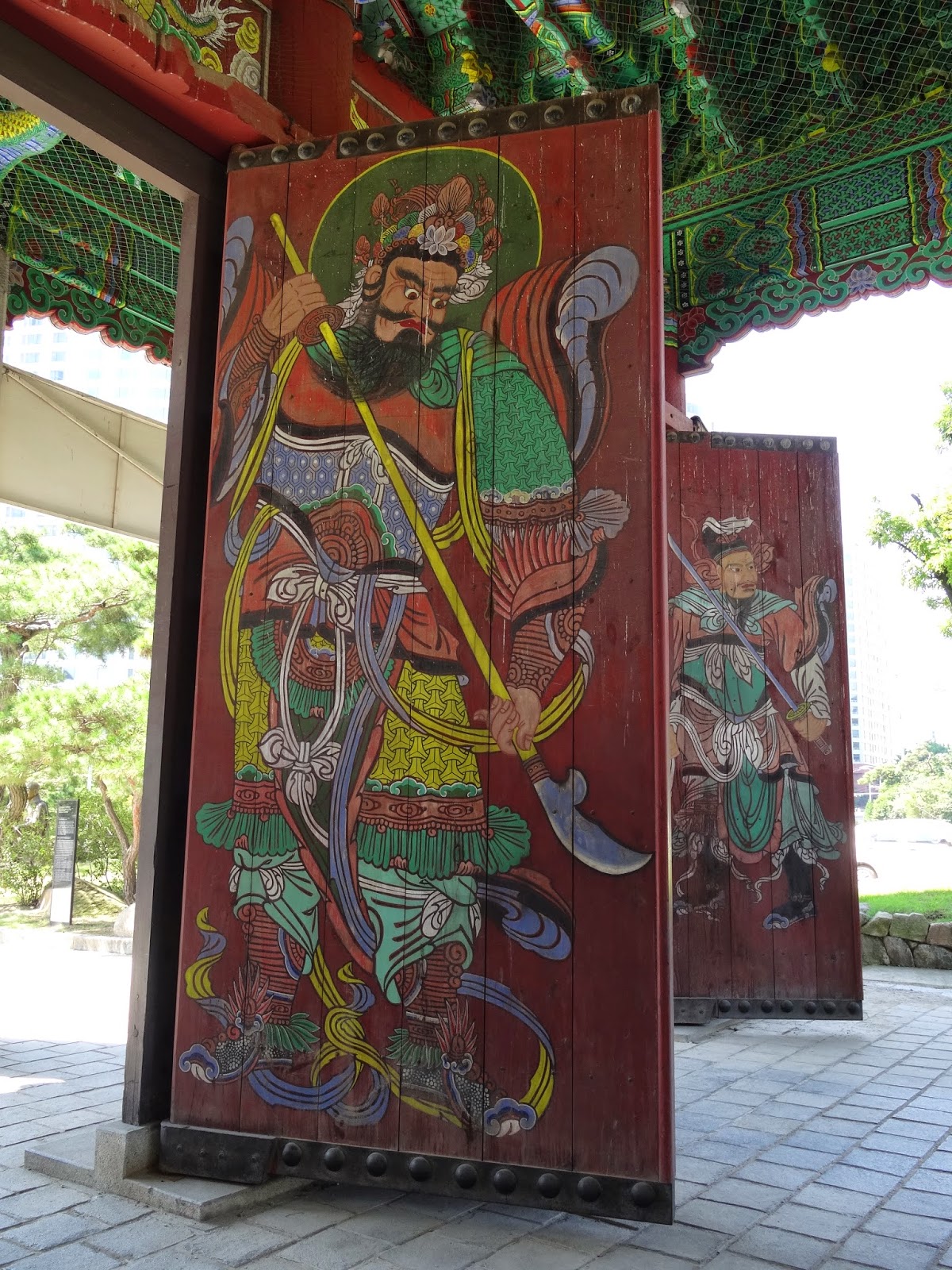 Two of the four door Guardians that are part of
the 1,200-year-old temple's Jinyeo-mun (Gate of Suchness) 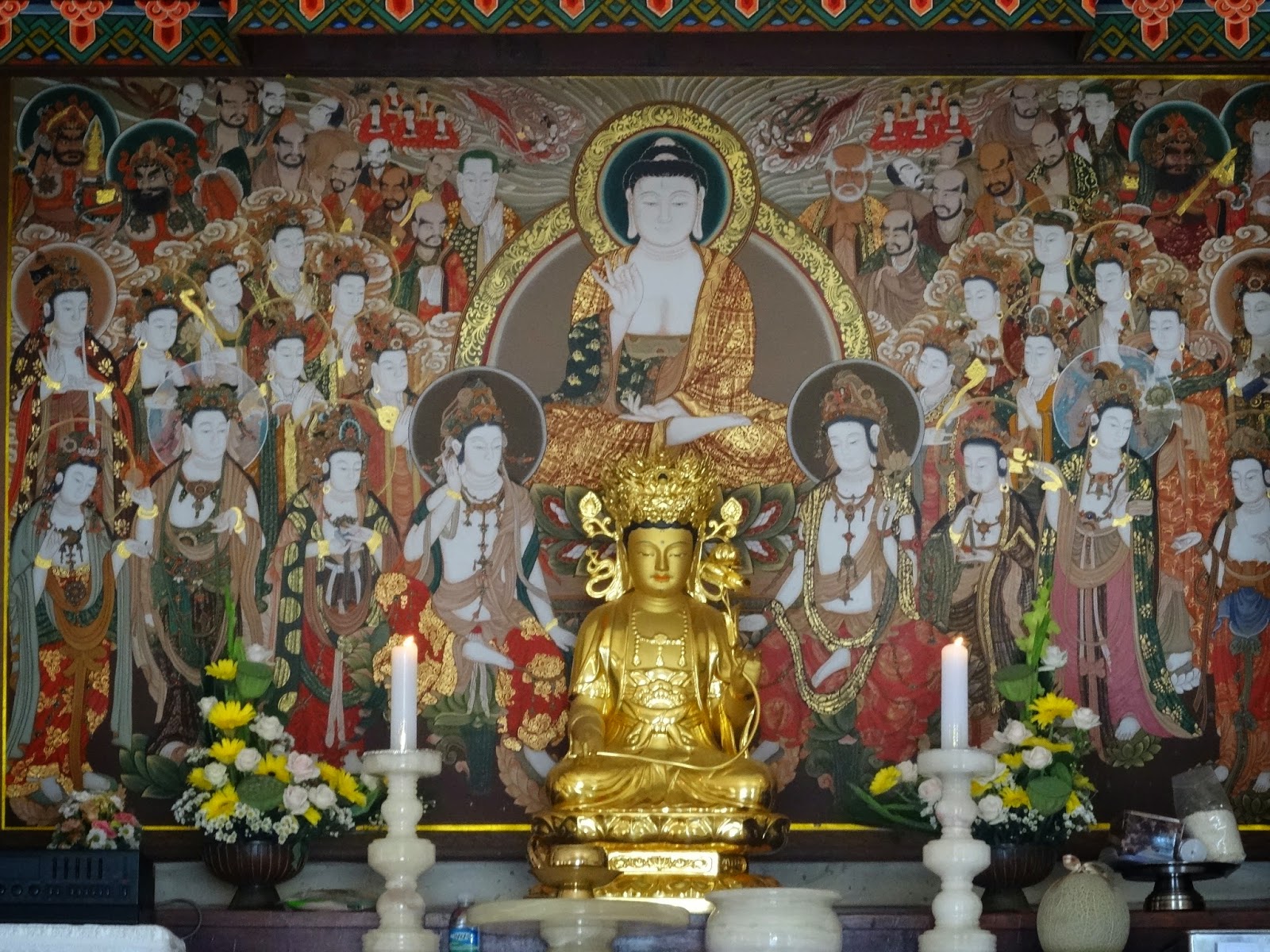 Within Bongeunsa's halls can be found religious art like this 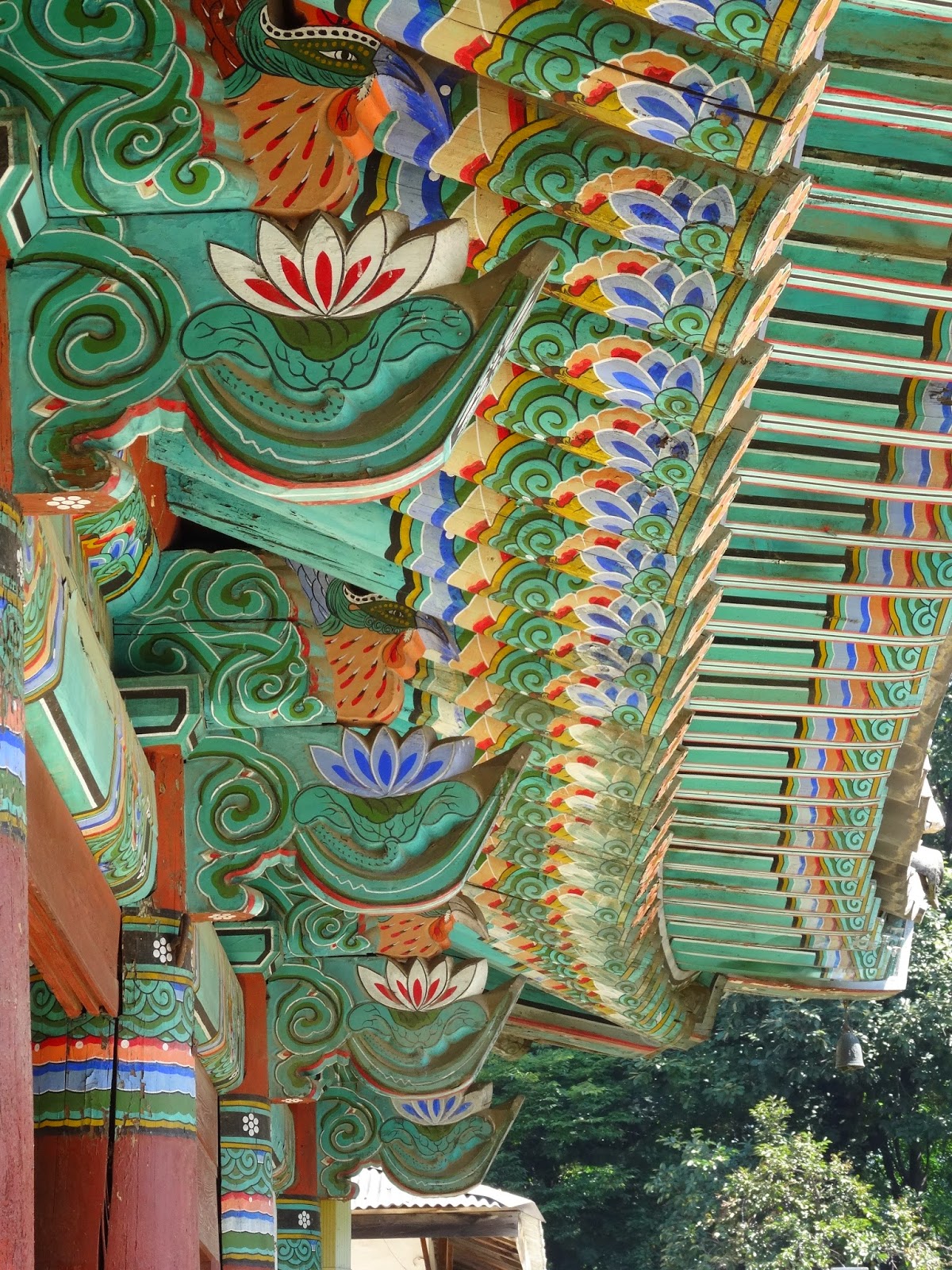 The Seonbul-dang (Building for Selecting Buddhas)
must be one of the most elaborately decorated buildings
used to host examaminations that I've ever seen! 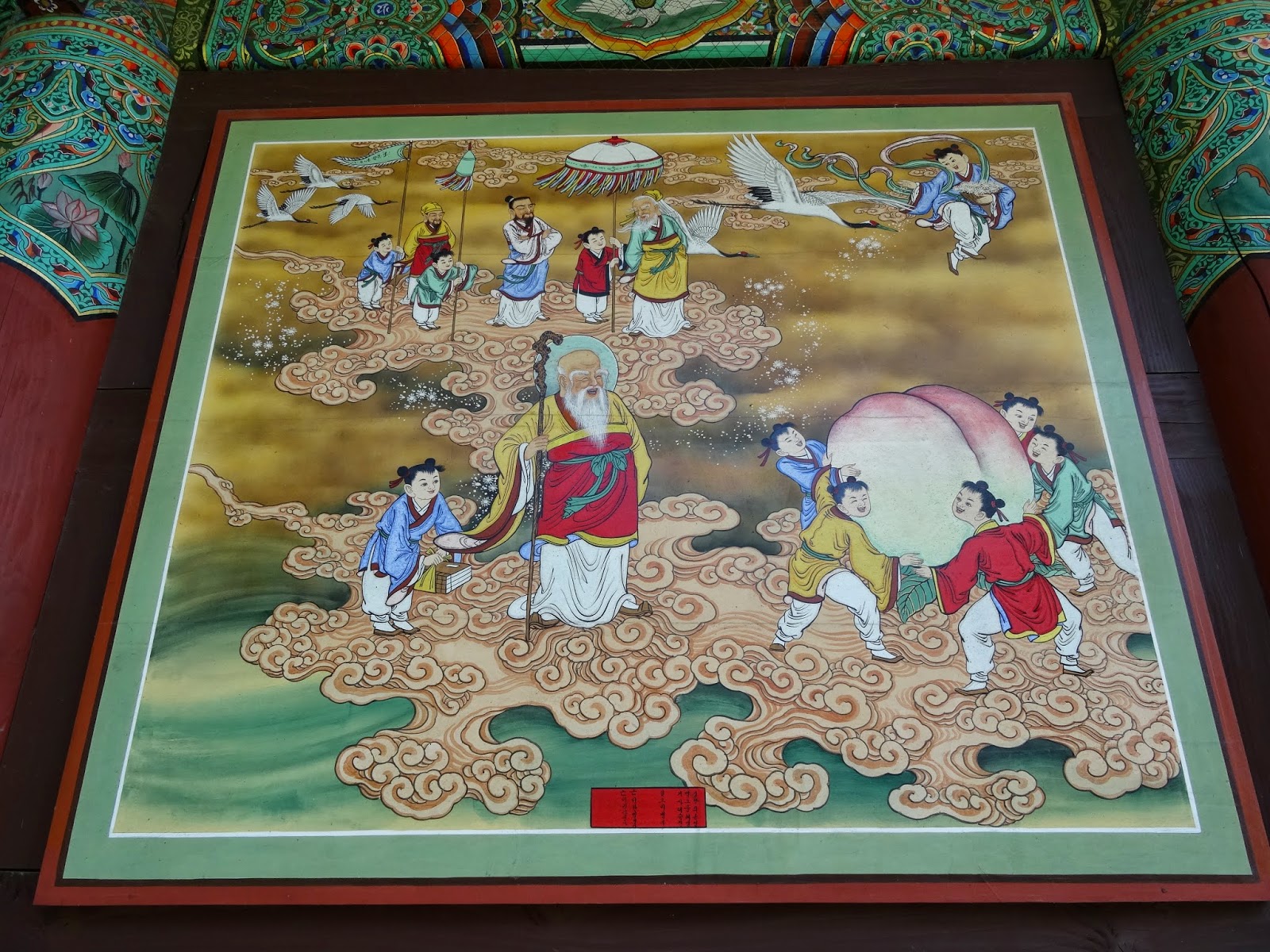 I was surprised to see the Taoist god of longevity pictured
up in the clouds with others, and being brought a giant peach
at this Buddhist temple 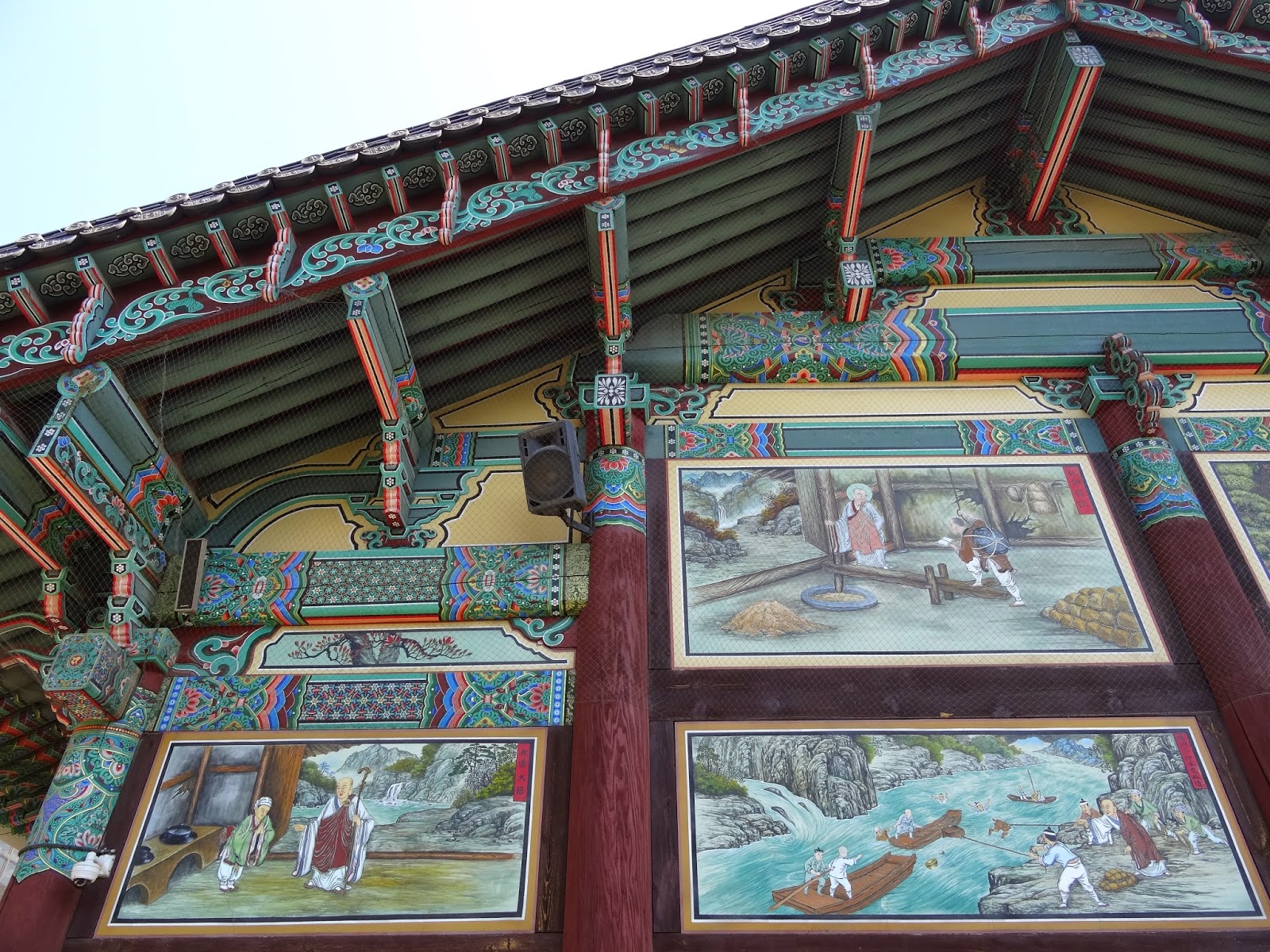 There were times at Bongeunsa where I felt like I was
at a large art museum complex! :O 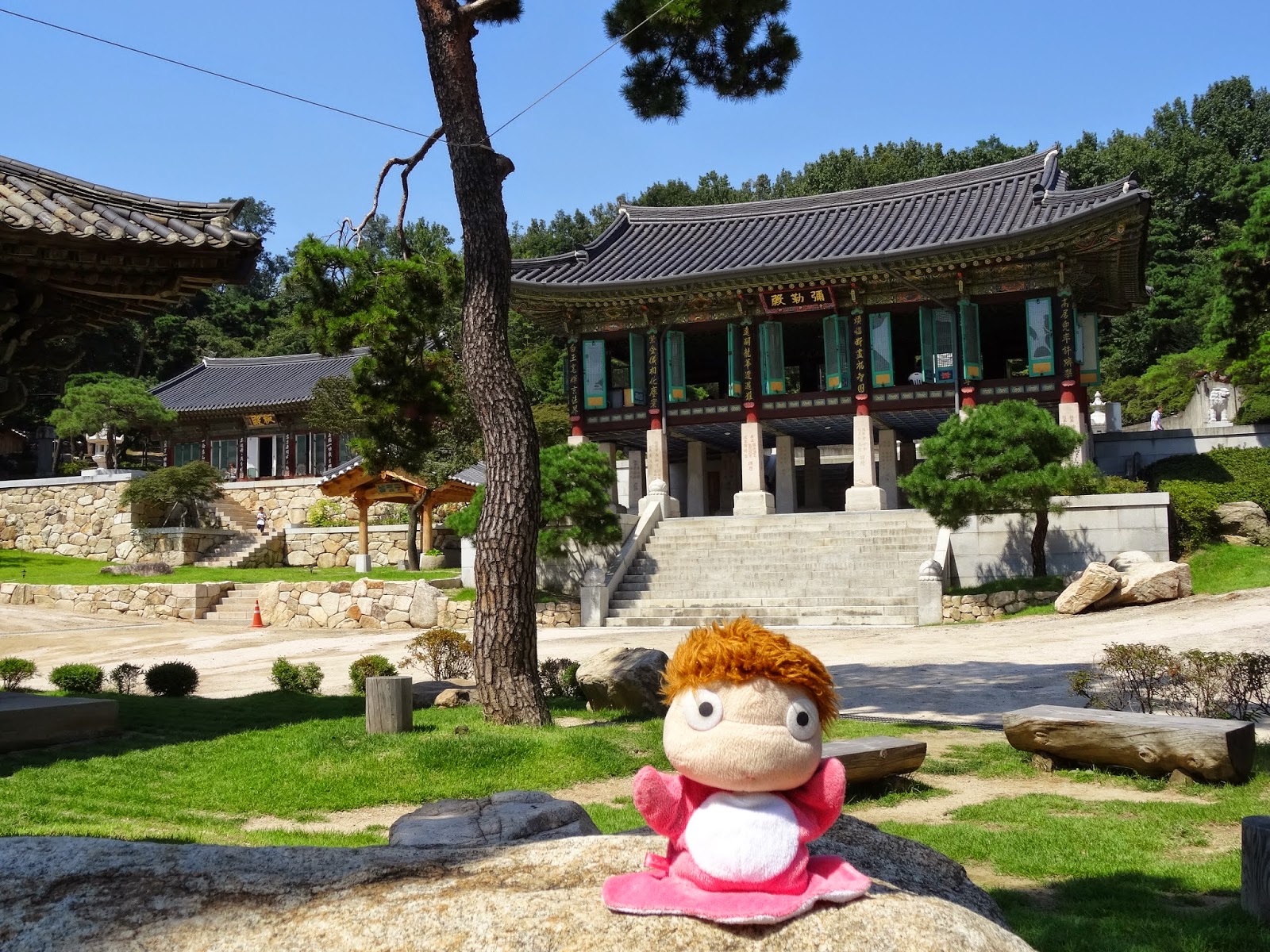 Of course Puppet Ponyo had to be pictured
amidst these beautiful surroundings :) 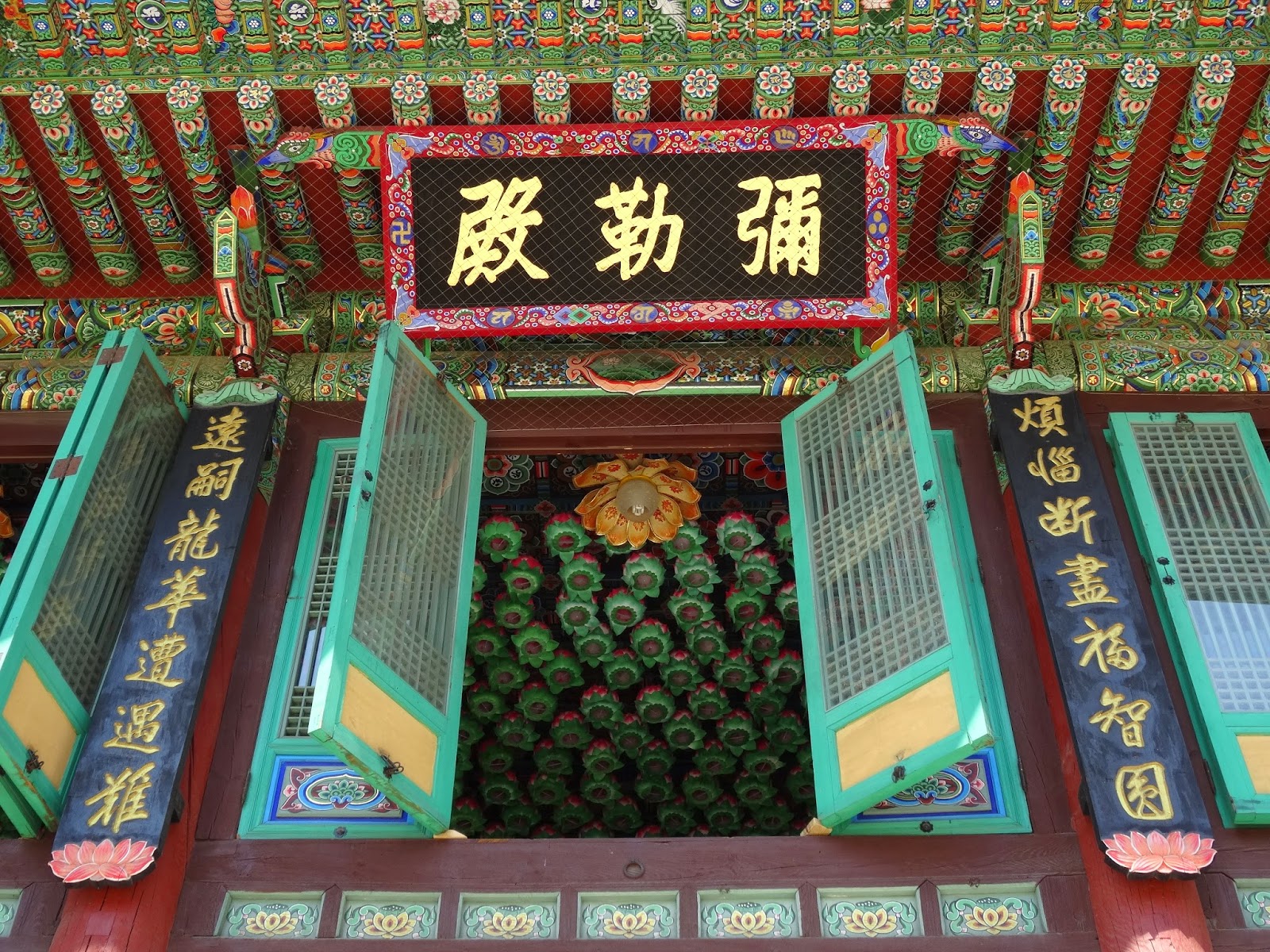 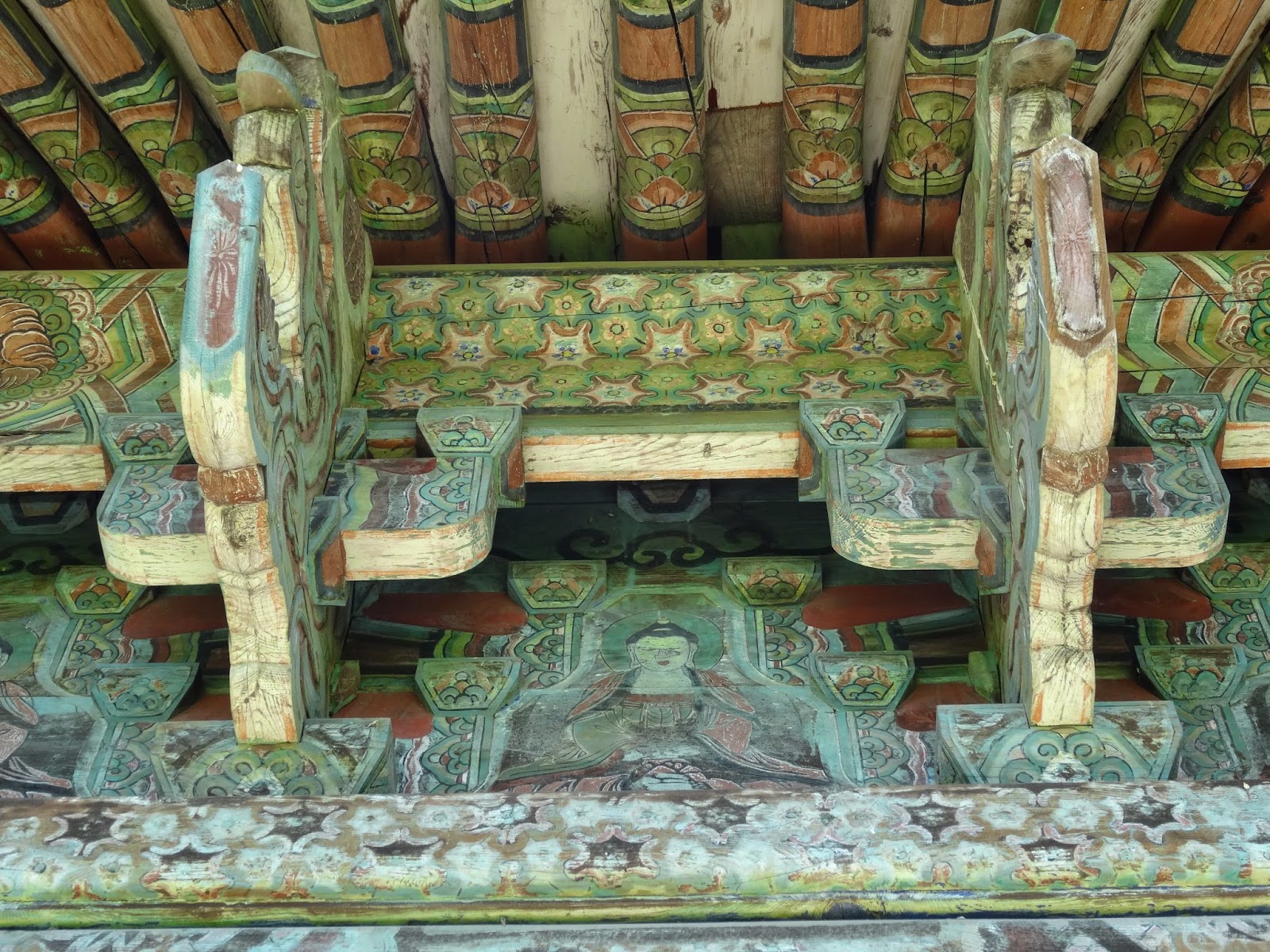 Badly damaged during the Korean War, the great bulk of
what's to be seen at Bongeunsa was built or refurbished after it
-- but some older, more faded but still precious sections also exist
Posted by YTSL at 8:23 PM

Beautiful! There is just so much color. I especially love the decorated eaves--for the patterns as much as the color.

I can certainly imagine why you had trouble narrowing down your choices of photos to post!

Great photos that would satisfy any Buddhist temple fanatic, such as myself. They easily win out for my affection over your previous cathedral photos. You're right, this does resemble an "art museum complex."

I've never seen Puppet Ponyo more relaxed. I suspect the temple surroundings tranquilized her into possibly a meditative state or maybe she was just pausing to reflect on her travel experiences.

Absolutely re there being so much color about the place! Re the eaves: I take it you love the lotus patterns? :)

After the (relative) austerity of many of the Japanese temples, the color and general visuals on offer at Bongeunsa was a real treat.

As for Puppet Ponyo: I think she really liked the rock that she was perched on. ;)