Based on the first photo-essay of my second hike on Tung Lung Chau, you'd think that conditions were perfect for a fantastic hike.  But while we had clear air and beautiful blue skies, we also had high heat to deal with.  In addition, this time around, I found the portion of the trail that I had found the most challenging the first time I hiked on this eastern Hong Kong island were now even more difficult to go along on account of their now being badly overgrown and a rope which one could hold on to to haul oneself up at the steepest point of the climb up to the highest point of Tung Lung Chau had now gone missing!

Although Tung Lung Chau's highest hill is only 232 meters high, trust me when I say that my hiking buddy's and I are agreed that it's one of the most difficult we've attempted in Hong Kong to date -- for not only was the trail up this unnamed peak very steep but we felt like the vegetation was trying to mug us, and definitely did leave us with lots of bloodied scratches on our arms and legs. Then on the way down, while I felt that we were done with the hard part, somehow my hiking buddy started reacting badly to the different trail we descended along not having much shade -- so much so that I got to fearing that he had got heat stroke!

At the very least, it's the first and only time we've hiked together that he decided he needed to lie down and rest for a while near hike's end -- and also the only time where he needed me to run and get him some more liquids from the nearest stall where I could get him something cold to drink!  Fortunately, he perked up some after he got some cold liquids into his system...but boy, did this turn out to be a hike that we'll never forget, and not for the best reasons!! :O 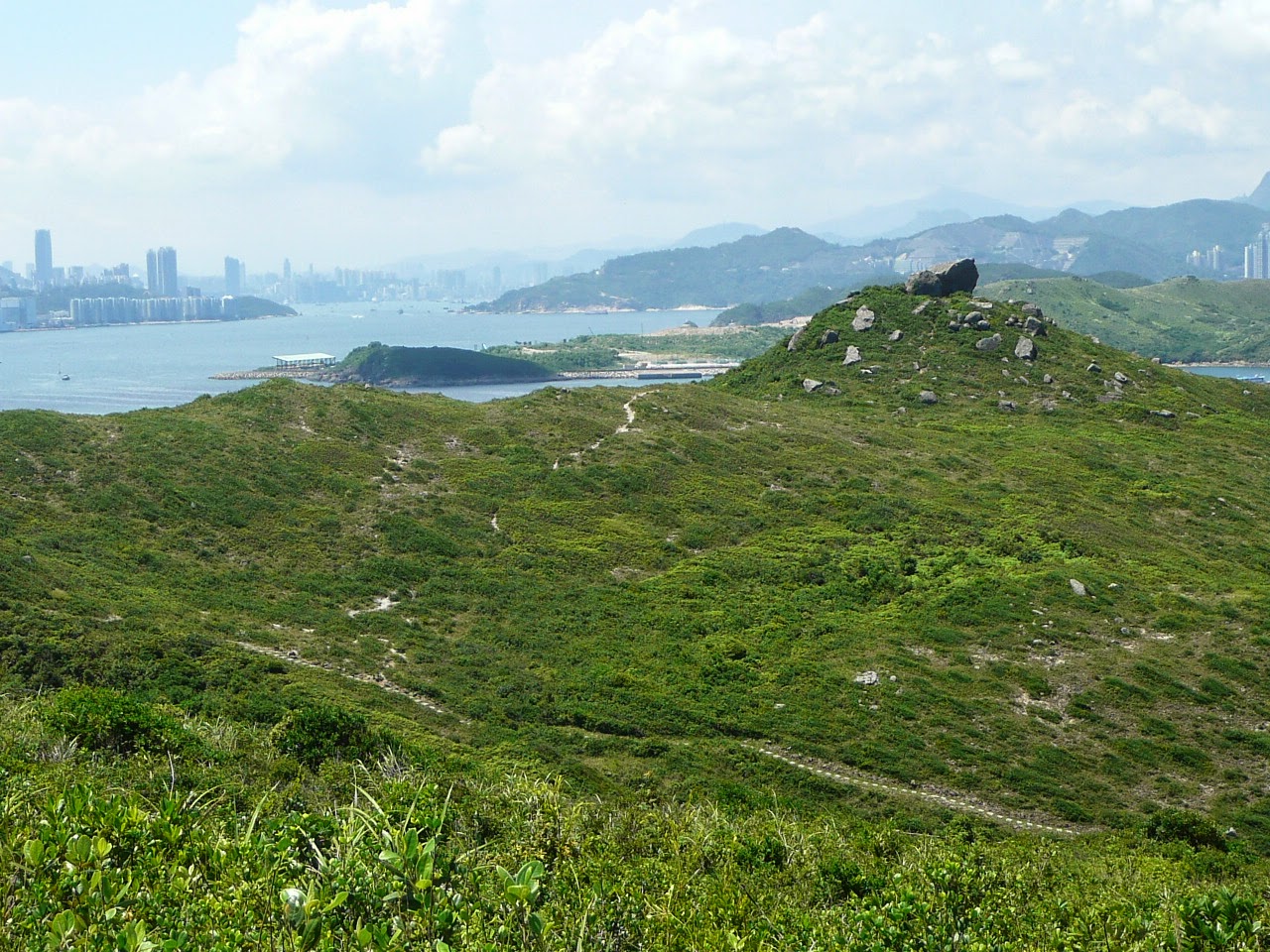 Initially, as we headed southwards from Tung Lung Fort
and up to higher ground, we were exhilarated by the
splendid views to be had that afternoon 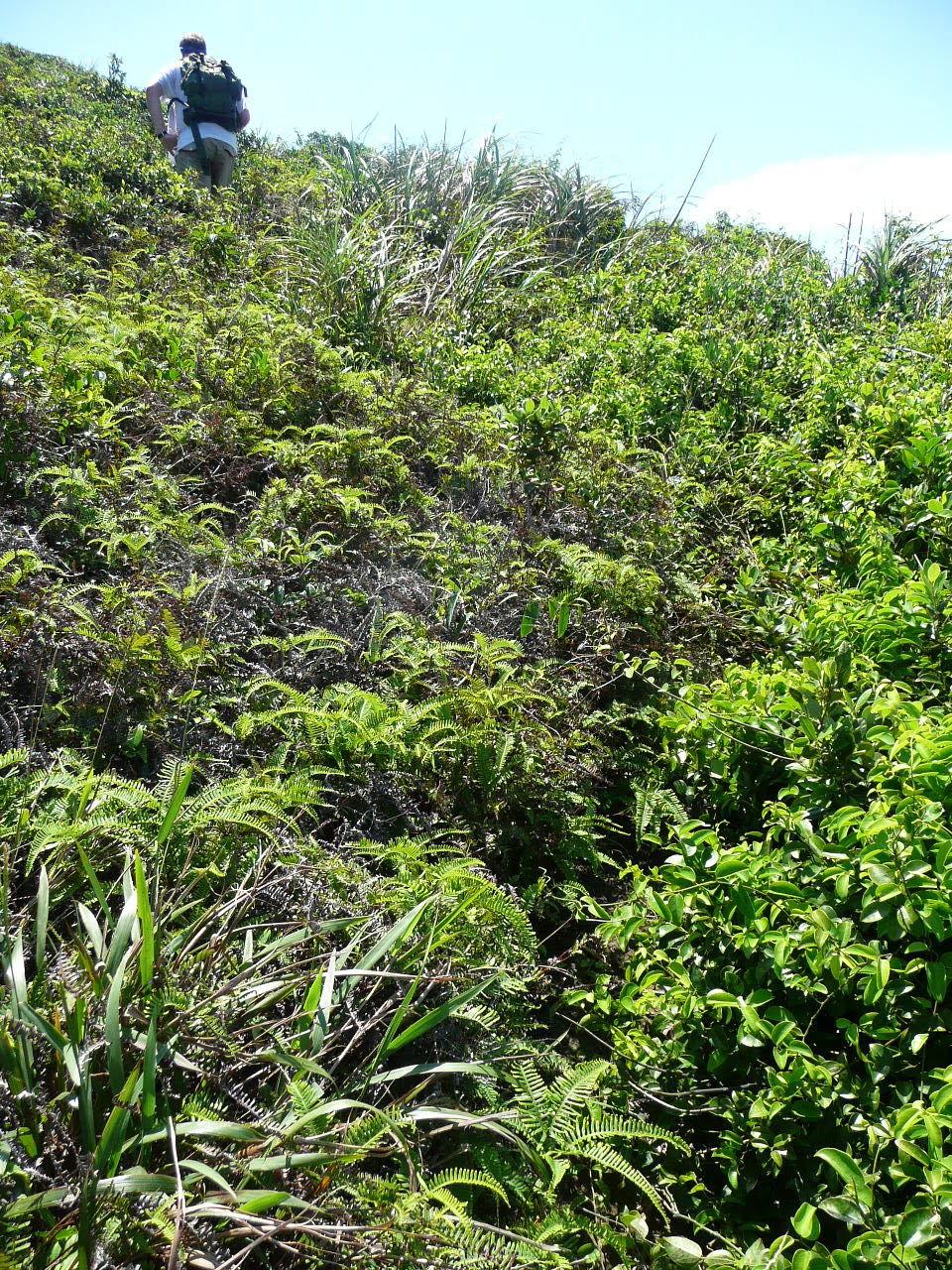 Can you see the trail up the hill?
(If you answer in the negative, you're in
good company with us!) 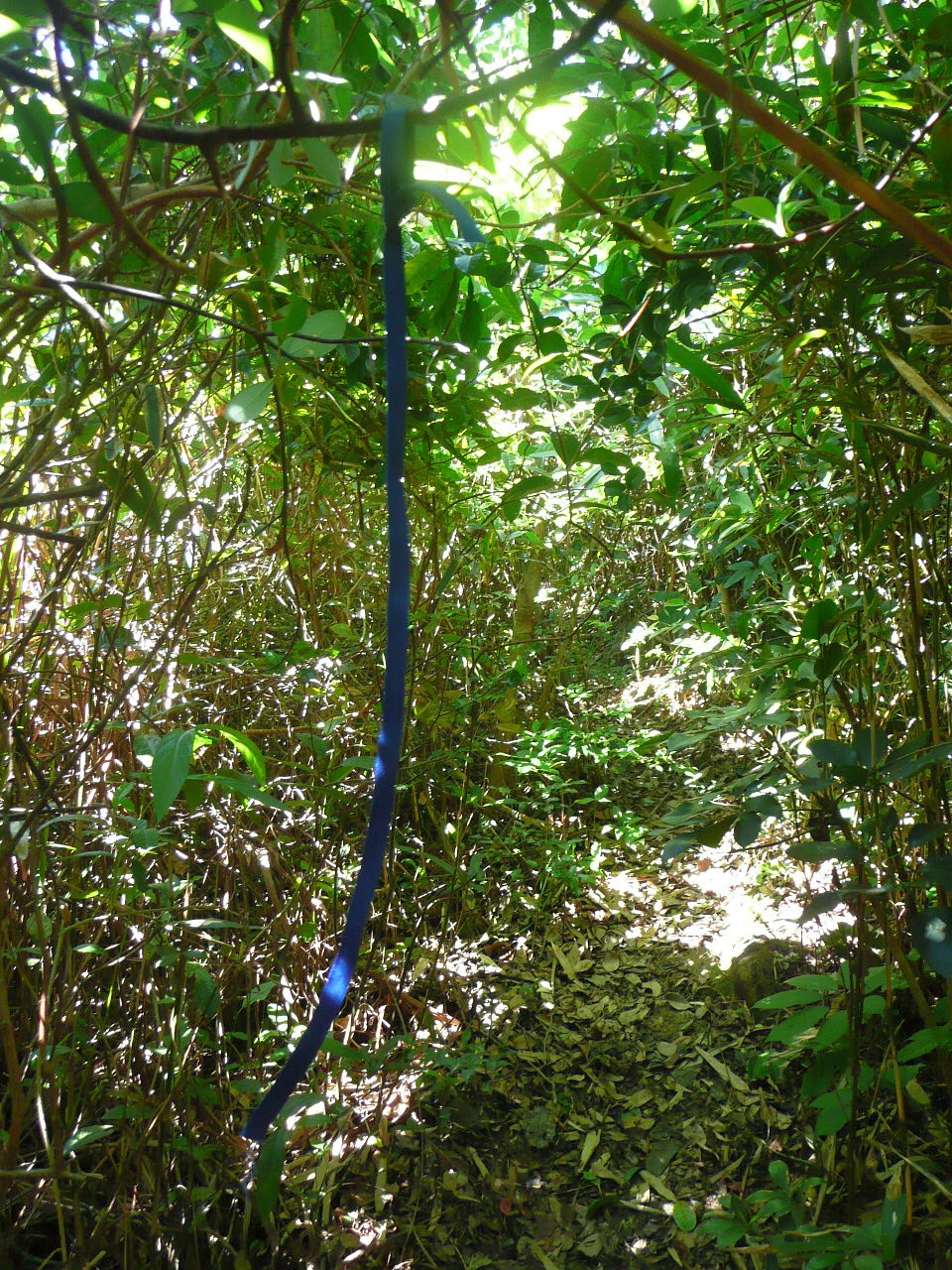 On badly overgrown trails like this, one is
super grateful to the hikers who have gone before
and left ribbons to help show the way 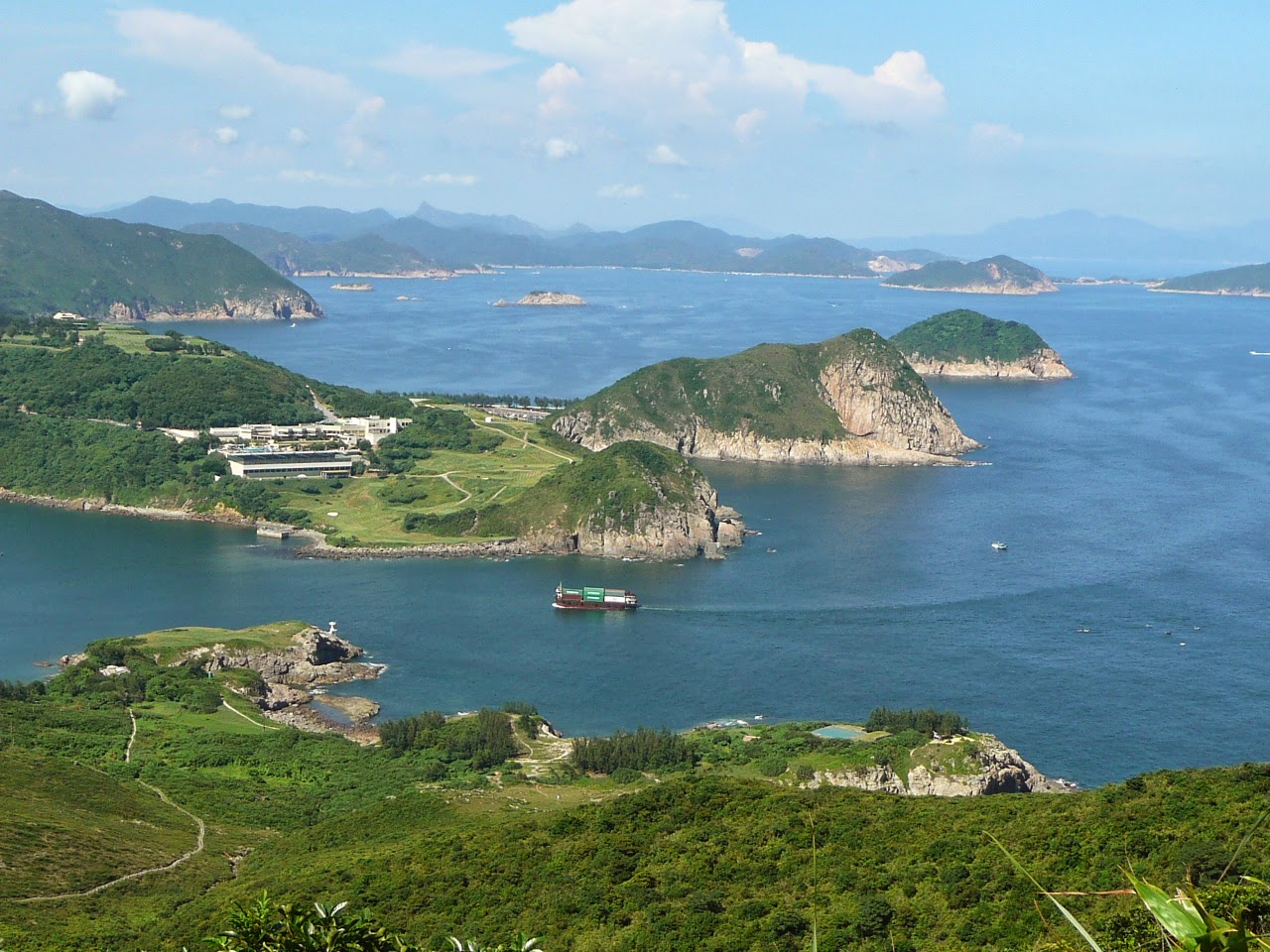 I'm not completely sure if they're worth it but there is
also no denying that from the top of the hill,
the views are pretty grand indeed 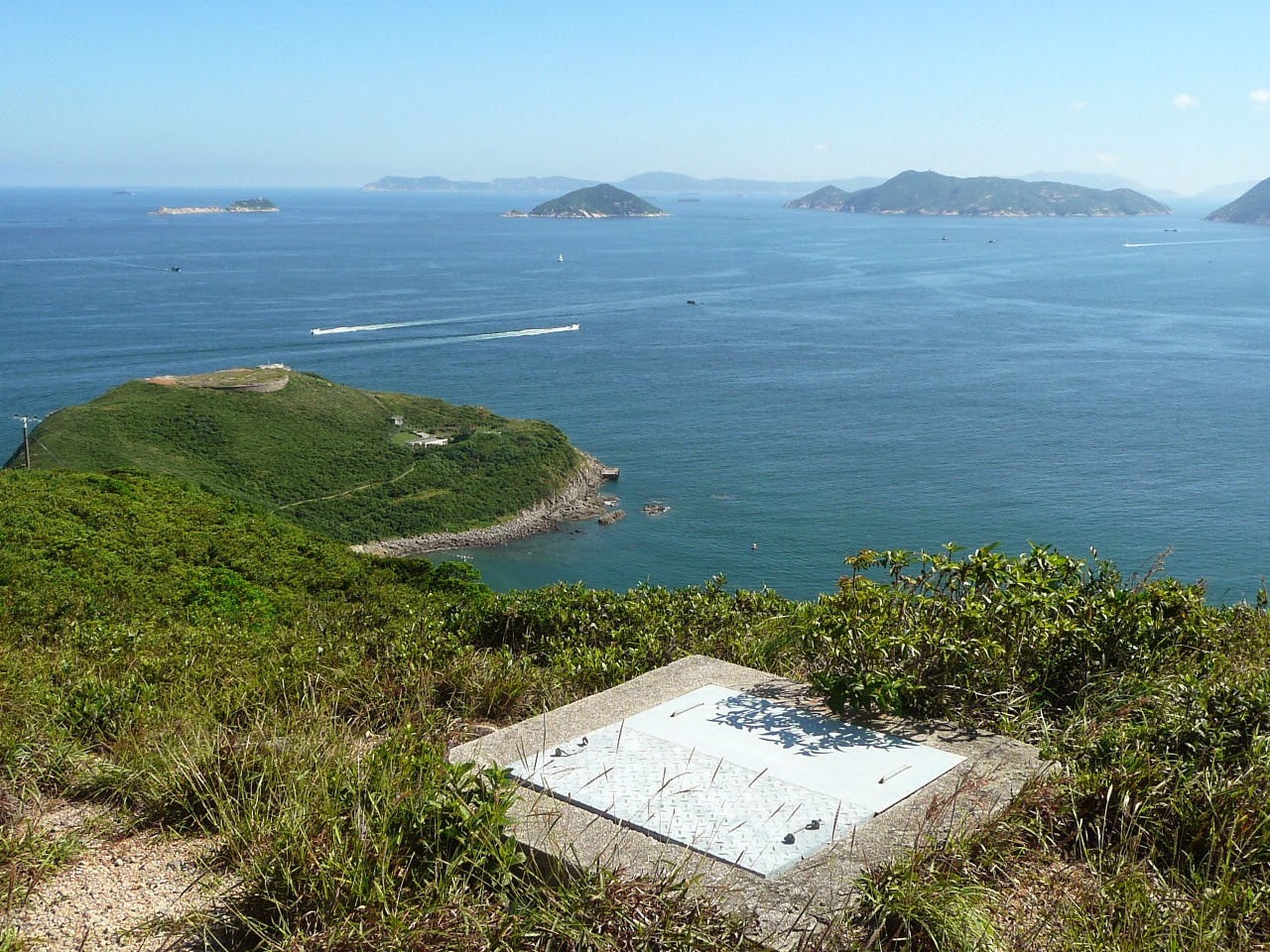 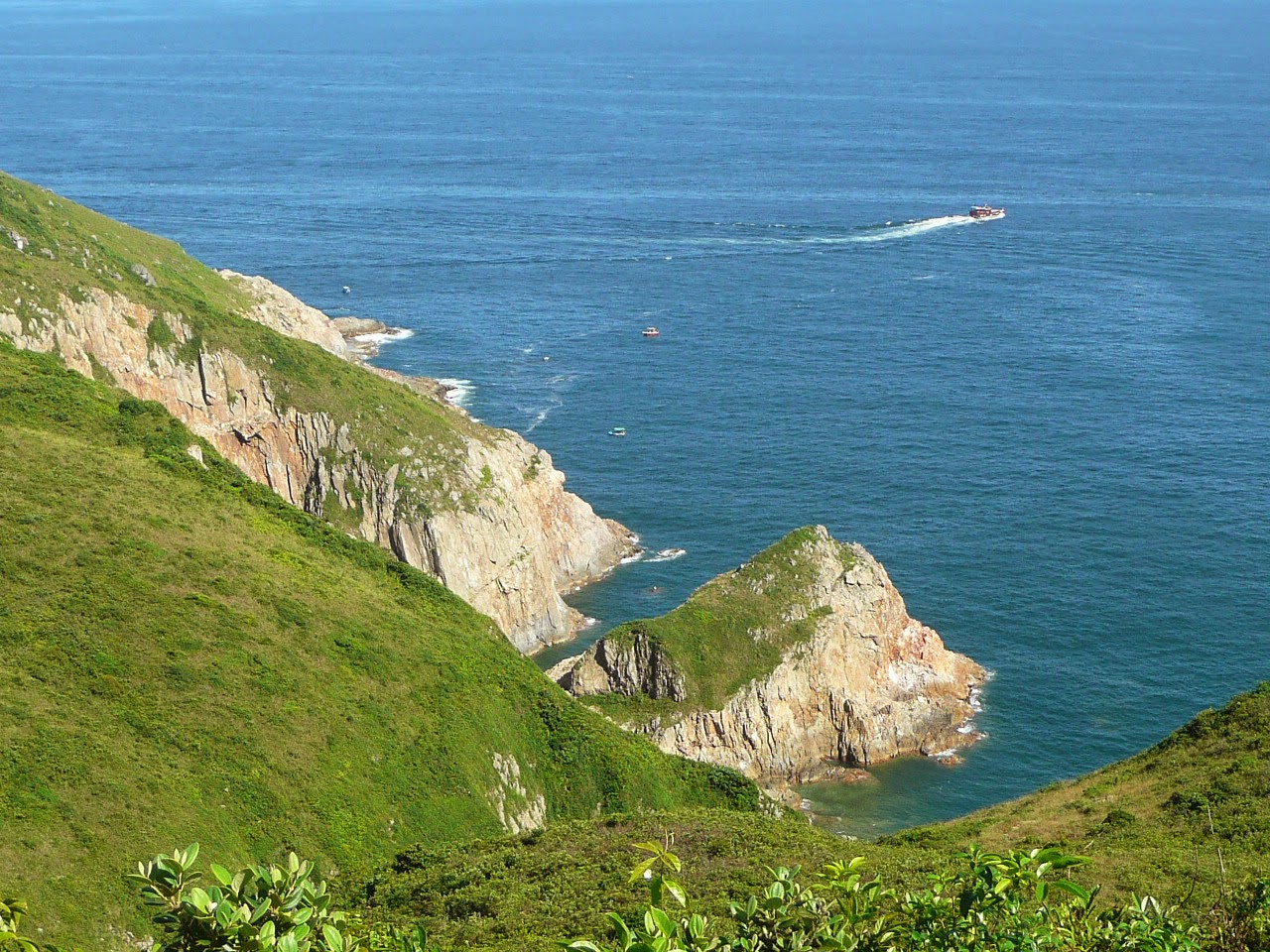 Tung Lung Chau's western cliffs are on the rugged side 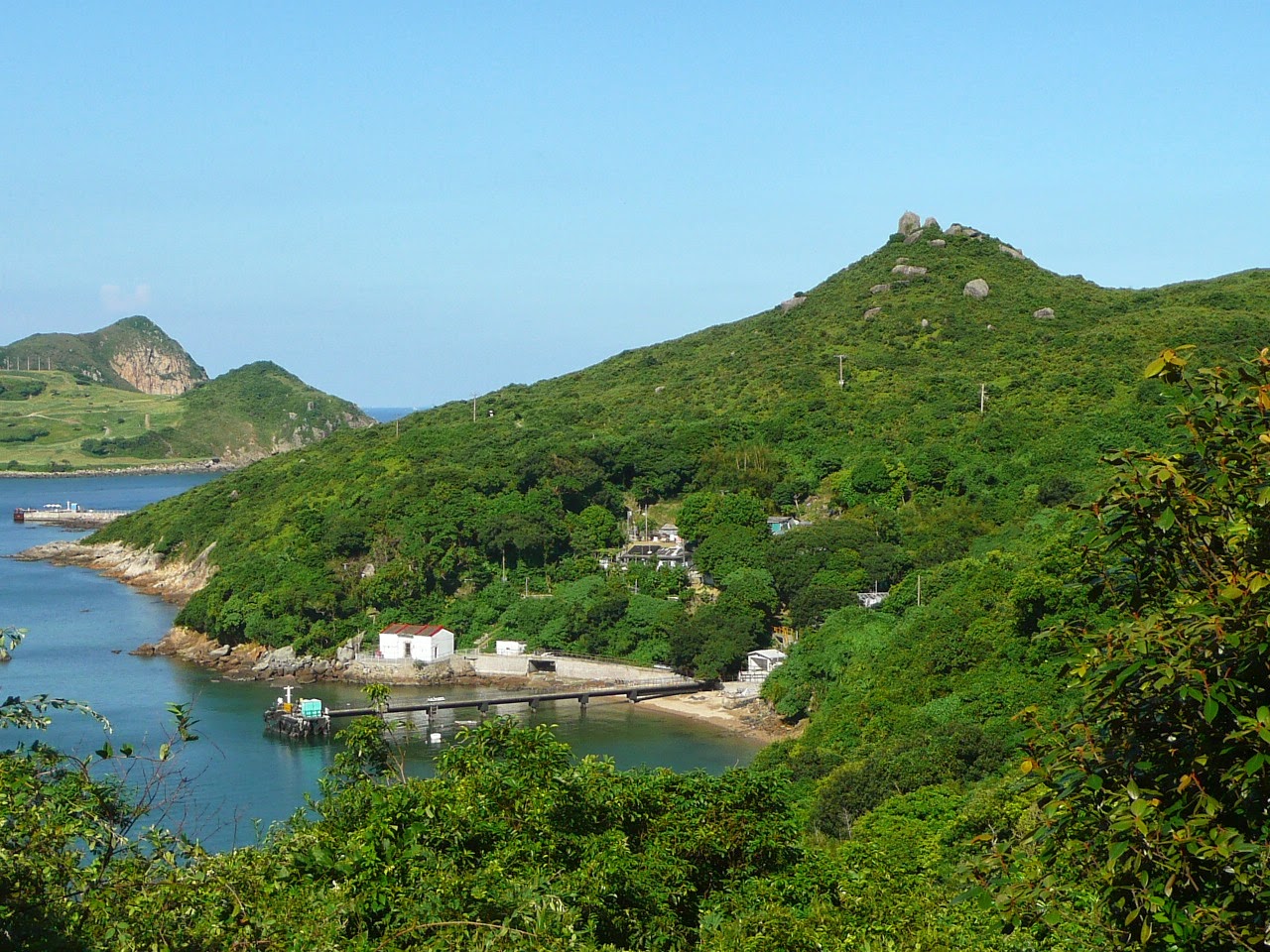 A sight for sore eyes -- I don't mean the general scenery
but the pier that we needed to get back to catch
a kaido back to Hong Kong Island! 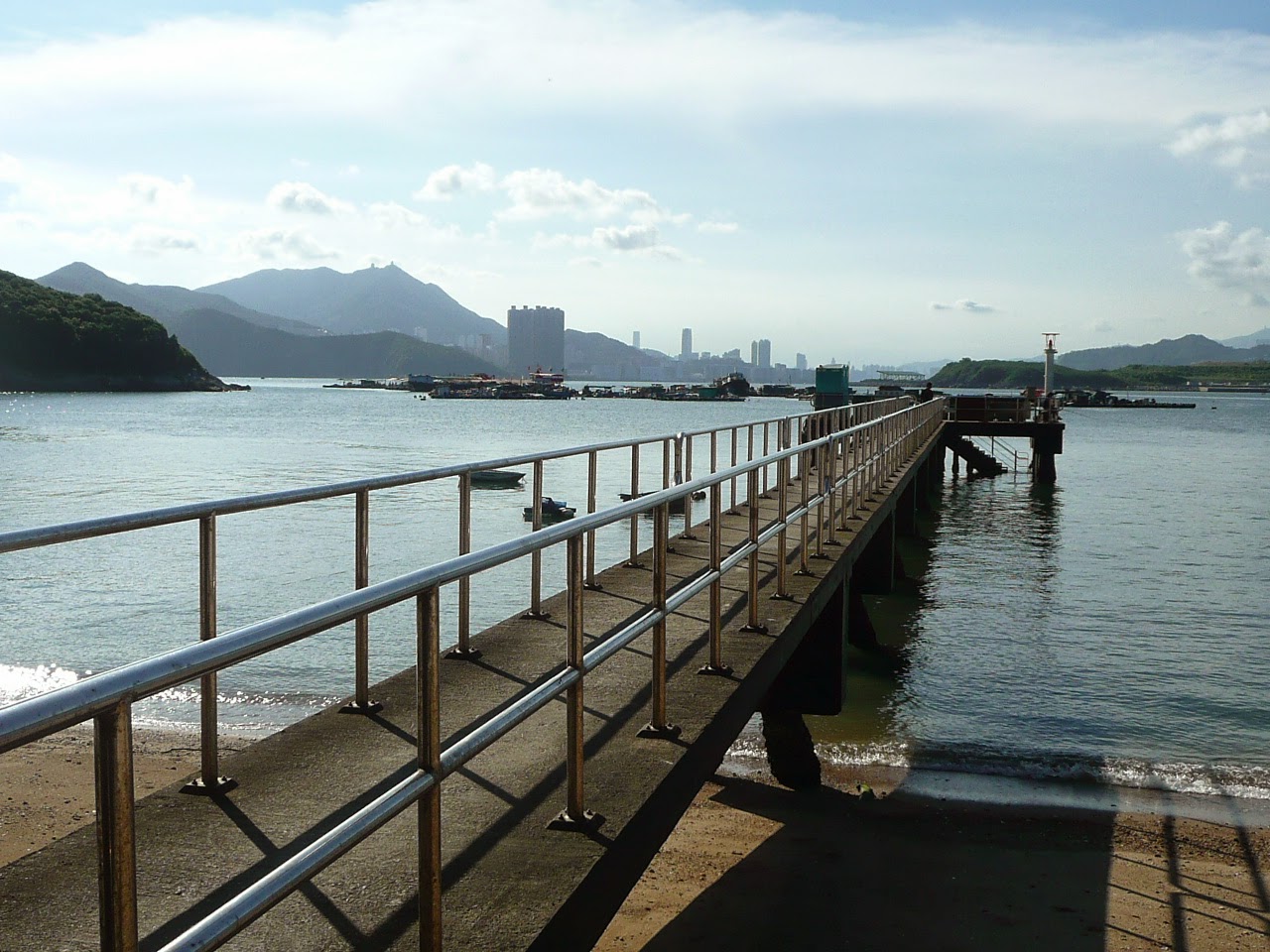 Hooray, we made it -- and yes, with plenty of time
to spare before the kaido arrived!
Posted by YTSL at 8:35 PM

...but such a beautiful part of the world...even if over grown. The ribbons are a super idea.

Yeah, looking at the photos, I remember how beauiful Hong Kong looked that day. But without needing to look any photos, I also remember that difficult hike!!

Even with the HKIFF in progress, a true hiker like yourself finds the time to search your archive and post a good photo-essay...I myself would think twice about hiking to the top of the peak in the second photo, in hot weather. I believe it was in HK Magazine that I read an article about two HK hikers in '99 who died of heatstroke.

I enjoyed your link on this page to your previous Tung Lung hikes...Your photos depict an island destination that looks well worth visiting to see rocks and study the moods of the sea...As photographer-writer Edward Stokes says in his book, Hong Kong's Wild Places: "Tung Lung's eastern face...plunges violentlly into the ocean...Nowhere else in the Territory are there cliffs so high or so forbidding."

So glad things turned out okay in the end! You certainly did see some beautiful views, but I can see how they would not the most memorable features of that particular hike!

Re summer hiking and heat stroke dangers: As you know, I hike in the summer because the air's so clear and the views often so very splendid. The funny thing with Tung Lung Chau is that its highest hill is way lower than other hills I've hiked in the summer (including Needle Hill and Grassy Hill) -- but ya, that steep ascent proved unexpectedly challenging.

Re Tung Lung Chau's forbidding cliffs: I reckon the ones at Tai Tau Chau are pretty forbidding too!

Yeah, I think this -- and the mule trail up Ngong Ping on a misty day -- are my hiking buddy's least favorite of the hikes we've been on thus far. And also the one up Mount Hallowes that we had to abandon midway! ;(