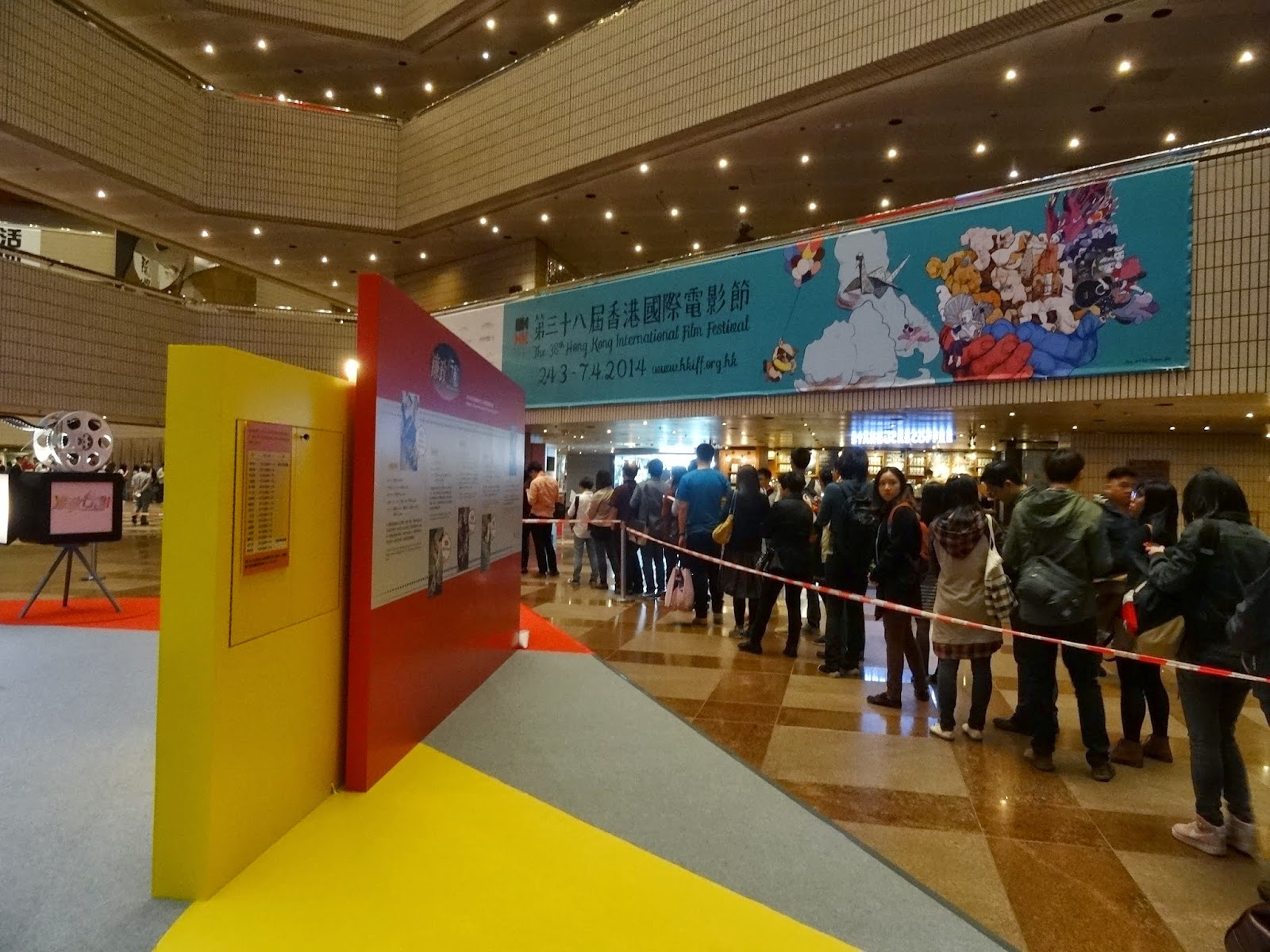 The line is long for certain HKIFF screenings, especially
those held at the Hong Kong Cultural Centre


Years ago, I had to gently break the news to a then entertainment industry colleague of mine that not all festivals and awards are equal.  Thus it is that I'm hardly going to want to rush to view a film that's won an award at a festival like, say, Moscow or Singapore and have learnt from experience to steer clear of films that triumphed at Rotterdam and Vancouver, but will try to check out films that came away with major honors at Cannes and Berlin.

Seeing that Black Coal, Thin Ice won director Diao Yinan the Golden Bear and Liao Fan the Best Actor Silver Bear at this year's Berlinale, the Mainland Chinese film noir set in a part of the country with hot summers and snowy winters was one of the most anticipated films in this year's Hong Kong International Film Festival for me. So even though its first screening took place at 9.30pm at the end of what had been a tiring day -- and work week (on account of my taking Friday off) -- for me, I nonetheless did venture to check it out then.

Sadly though, I have to admit to having dozed off a few times during that screening of this cinematic offering whose pacing I generally found on the slow side, and filming style I found reminiscent of Cai Shangjun's People Mountain People Sea, another Mainland crime film that won a major award at a prestigious European film festival (Venice, in the 2012 production's case) -- and similarly generally underwhelming.

To be fair, I found the early part of Black Coal, Thin Ice -- specifically the portions of the work that were set in the summer of 1999, and involved the discovery of human body parts in various coal factories spread over a sizable area and a subsequent criminal investigation led by Liao Fan's character -- to be interesting enough.  But after that section's imaginatively staged climactic shootout in the hair salon -- a scene that started off seeming as it'd be pretty routine, only to shock with a sudden, farcical turn of events -- and a bravura piece of cinematography cum editing that has the film seamlessly segue from the summer of 1999 into the winter of 2004, I felt my attention wandering as the story began to majorly meander.

Thinking back, I wonder if it's entirely coincidental that I became less interested in proceedings after the film's lead character went -- as a result of being wounded in the line of duty -- from being a stalwart detective sergeant to an alcoholic security guard? Put another way: perhaps director Ding sought to emphasize the changes to the film's chief character by changing the level of energy in the work as a whole as well as his disposition.

If this is the case, then this move was a bad one to my mind.  In addition, I found it strange -- and unhelpful as far as character and plot credibility went -- for Liao Fan's ex-cop character to romantically pursue Gwei Lun Mei's character, seeing as that she first became known to him as the widow of the man whose body parts turned up in various coal factories, even if it were primarily an investigative strategy on his part.

Much more effective was the stunning scene in which the sharp blade of an ice skating boot is used to swiftly wound and then kill an armed man.  If only there had been more violent acts carried out in the film -- because their impressive execution definitely were the highlights of this offering whose helmer, alas, generally tended to steer it in the direction of art house drama rather than crime genre work.

Thanks the film reviews which I enjoy reading.. it's very helpful to me if/when the films are show at festivals here.

Thanks for letting me know you find the reviews useful. I'm (re-)discovering that writing about the films helps me to mull and muse about them -- and in the process better realize my reactions to them (hence a few ratings revisions already thus far!).

So glad to see that I am not the only one who enjoys reading your film reviews. I hope your (re-)discovery that "writing about the films helps you to mull and muse about them" will lead to film reviews being a more regular part of your blog! : )

I'm glad too! The thing though with film reviews is that, well, they take quite a bit of time and effort -- and are easier to write up on non-work than work days... ;S

I saw this film at HKIFF on Sunday night, true, the pace was glacial at times. Some things I couldn't quite figure out, what was supposed to happen at the skating rink, what the relationship between the woman and her boss. I liked it I think more because it was a different location and had some local touches to it but most likely not going to run out and buy it when the dvd comes out.

The setting for the film is a different part of China from, say, Shanghai or Beijing or rural areas but it's also the kind of nondescript secondary or tertiary city that I've seen in other films.

Like I wrote in my review, "Black Coal, Thin Ice" got me thinking "People Mountain People Sea". This was in part because of the setting (as well as being meandering and following one man as he sets about his business). Other films I've seen in recent years with that kind of setting include "Buddha Mountain" and "Grain in Ear".

Hope you find the time and effort used to write film reviews well-spent. Look at all the readers' reactions and comments! And you are in a great position to let us know about films that we would otherwise not have seen or even heard of. Having said that, I really appreciate your reviews on the blog, even if there aren't that many of them!

By the way, That Demon Within's score of 6.5 seems to be one of the lowest you've given a Dante Lam in recent years. What're the issues with it?

It is indeed nice -- and encouraging -- to get reader reactions and comments. If only my visitor numbers were as high as you may think from the comments, etc... ;b

With regards to "That Demon Within": hmm, you don't want to wait for my review of the film? ;b

Regarding the number of visitors, are you referring to the no. of visits to your blog or no. of clicks on the actual reviews? I notice that readers can read the entire content of your posts (except the comments) without clicking on anything, so the number of clicks recorded may be much lower than the number of posts read.

I'm referring to both the total number of visits to my blog and the number of clicks on the actual reviews. But it's okay, I must admit that I'm happy if each of my entries even gets one set of positive comments! ;b

That's easy then. I'll try to keep up and give each of your film reviews a positive comment from now on! ; )