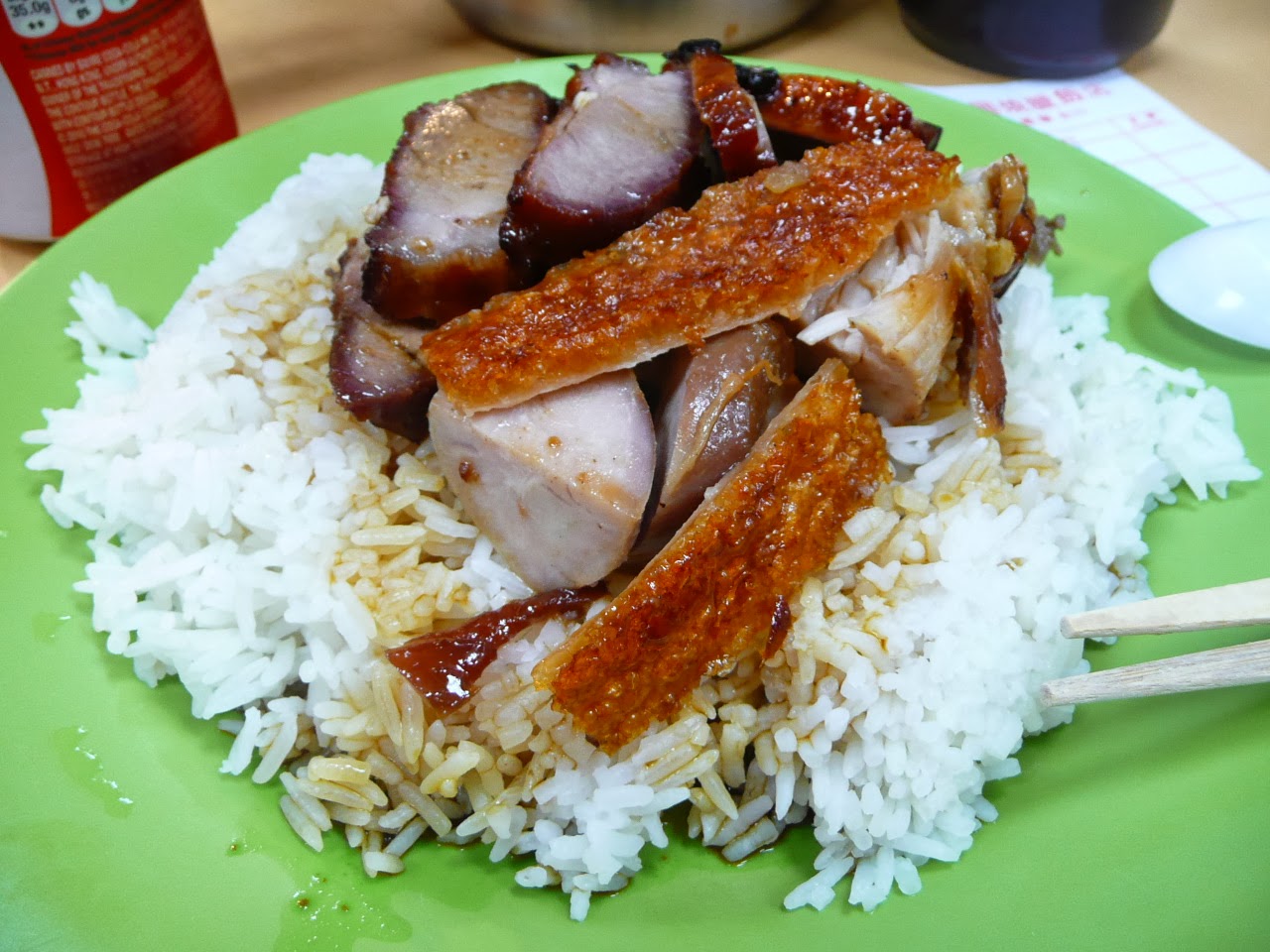 Does this plate of char siu and siu yoke rice
look good to you? 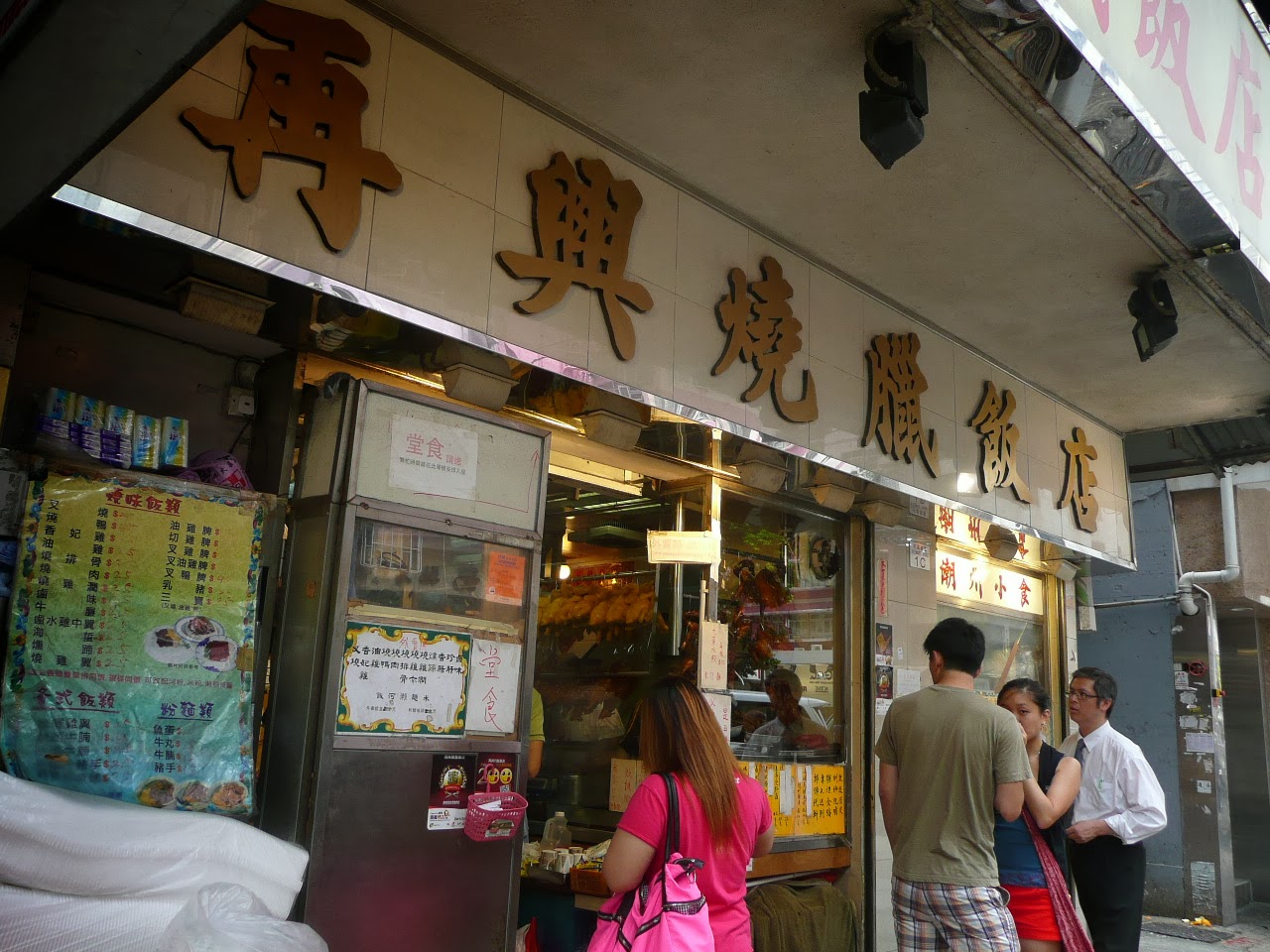 Then head over to Joy Hing for one of your own! :b

More than 10 years ago now, I moved back to Asia after having lived elsewhere for around two decades.  The first place I lived back in Asia was in Kuala Lumpur.  Although it is one of those parts of the world where it can feel like it's easier to find pork-free -- and even halal - dim sum than the regular pork-filled kind, this Malaysian city also happens to be where I believe the best char siu in the world to be found.

Close to seven years after having moved to Hong Kong, I still firmly believe that the "sticky char siu" that I was introduced to by my ethnic Hakka boss is the best char siu I have ever had in my life.  The sad thing is that since I've not been back in Kuala Lumpur in years, I think I've forgotten the address of the dining establishment where I regularly lunched with work colleagues -- and never ever paid notice to its name!

On a happier note, I feel like I've come to have a favorite siu yoke place in Hong Kong where the char siu isn't too bad either -- this especially when you specify in your order that you want "fei char siu" (i.e., fatty barbecued pork) rather than the more regularly served kind!
I actually don't feel obliged to wax too lyrical about Joy Hing since there already are many odes to the place, including over at the Hong Kong Project blog which had a big hand in making me decide to finally give the place a try.  But I will say that eating there did convince me that it's actually worthwhile to go all the way to Wan Chai to eat this dining establishment that visually looks little different from so many other generic, super no-frill, hole in the wall siu mei purveyor -- and yes, I have indeed done gone back quite a few times since my first meal there!
The funny thing though is that while most people seem to go on most about Joy Hing's char siu, it's its crispy skinned siu yoke that I adore most.  (Also while the roast goose there isn't too bad, I'm sorry but there's no way it can rival that at Yat Lok or Sham Tseng's Yue Kee Roasted Goose Restaurant!) :b
Posted by YTSL at 8:29 PM

Yes, Char Siu (BBQ Pork) has to be properly done with a good proportion of fats. What is called 'Fei Char' is what we call normal Char Siu a few decades ago. The fat proportion of present day 'Fei Char' is just about 25-33% of the portion, which is actually not that much. It is not even what they called Half & Half back then.

Lean Char Siu is not my dish either.

Since you like "fei char" so much, have you ever had the char siu at Hay Hay on Lockhart Road in Wan Chai? A few weeks after I moved to Hong Kong, I had the char siu there and found it way too fatty (and greasy) for my liking -- but you may like it! ;)

I had not been to Hay Hay for years. For those half & halfs I could only have a piece or two. But there is a Restaurant in Aberdeen (Carnival Seafood Restaurant) that I would buy Cha Siu a few times a month. It would usually have special price for take away only. Last time I was there they were selling around HKD30.- for half a catty. Their Cha Siu have atound 25% of fat, maybe a bit less sometime, but at that price it is considered very good.

I like the Cha Siu, Siu Yuk & Roasted Goose at Tak Lung (in San Po Kong) too. If you go to Tak Lung, remember to reserve Gam Chin Gai (金錢雞)。

Sorry to be a nervous Nellie! Here in AZ we just heard of a Malaysian airliner going down. Ping me to let me know if you are OK!

I've never been to either Carnival Seafood Resetaurant or Tak Lung. Will look out for them when I'm nearby -- thanks for the recommendations!

Re Gam Chin Gai: I had some at the Manor restaurant in Wan Chai which has, sadly, closed down. I have an uber foodie friend who totally loves them. I must admit to having had a few too many one dinner when two other diners refused to eat them and handed them over to me who really hates to see good food wasted! ;D

Don't worry, I'm not on any aeroplane and haven't traveled on Malaysian Airlines in years (or been in KL or Beijing, for that matter)!

Having said that, I really hope that the people on that plane are okay. That kind of thing happening is what gives those of us who fly or have relatives and friends who regularly fly major heebiejeebies.

You ask under the top photo: "Does this plate of Char Sui...look good to you?" Does it ever, and more than enough to make me hungry for the foods and smells of Chinese cities in Asia.

When I first looked at this photo, one word flashed in my mind: PENANG! I probably had this in Georgetown several times way back when because it looks so familiar.

George Town does have some siu mei stalls but I have to say that I've had better char siu and siu yoke in London as well as Hong Kong and Kuala Lumpur. Rather, when you're in Penang, better to go get yourself some Hokkien mee, rojak and assam laksa! ;b