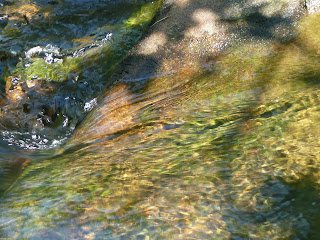 Hau Tong Kai stream was in full flow this afternoon 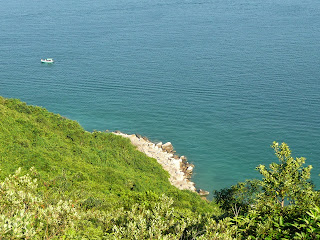 Since I started hiking in Hong Kong a few months after moving to the Big Lychee, I've only had a handful of hiking buddies.  Funnily enough though, each time now that I've gone on the Tai Tan Country Trail, it's been with different friends as well as at different times of the year -- and what I've found is that that going with different people as well as doing so during different seasons (or at least months) really have made for different hiking experiences even when going along the same route.

A case in point: the first time I went along this Sai Kung Peninsula hiking course, it was with two friends whose primary reason for tramping about Hong Kong was for fitness -- and consequently, we went along the trail at quite the brisk pace. In contrast, both the hiking buddy I went along the trail with earlier today and I are more "prepared to stop to smell the roses" types -- so today's excursion's was generally more leisurely and included a few detours off the official path to do such as get closer to a scenic stream or get on a beach or two.

With regards to the scenic stream in question: Hau Tong Kai was fuller this afternoon than I had previously seen it -- or, for that matter, heard it.  And the sound of the running stream really was very noticeable and pleasant early on in the hike.
Actually, in general, the sounds made by different bodies of water, including the waves coming to shore on a small beach on the edge of Long Harbour, were elements that really contributed to the high enjoyment quotient of this afternoon's hiking experience -- and prompted my hiking buddy to say at one point during our trek that he wished he had a sound recorder with him today rather than just a camera! :b
Posted by YTSL at 9:43 PM

Yes that would have been really cool if you recorded the sounds! And if you had a smart phone with a recording app you could have done it... It really is soothing listening to the movement of water!

You come hiking with me and record the sounds! To be honest, I'm happy to hear them in situ, don't feel a need to record them! ;b