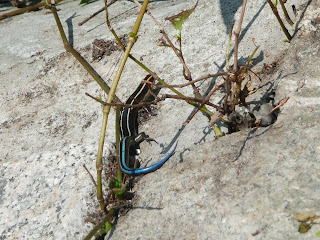 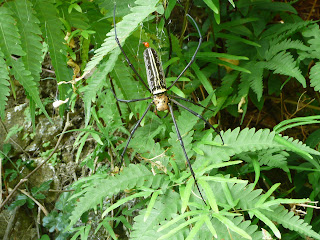 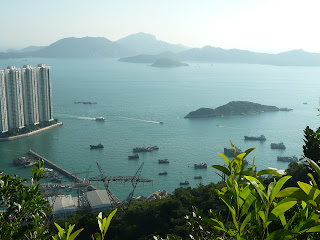 Some of the views to be had along the hike were not bad either :)

For the first time in a long while, I didn't feel obliged to change my t-shirt before I got home from an afternoon of hiking.  This wasn't because my hiking buddy and I didn't exert ourselves all that much today -- since we did complete Sections 1 and 2 of the Hong Kong Trail and then a couple more kilometers of trail that took us down to Aberdeen.
Rather, it was because today's weather was the most ideal for hiking (i.e., cool(ish) and dry) that it has been for ages.  Put another way: thanks to the temperature being under 30 degrees Celsius and the humidity levels not around the 90 percent mark (as they generally are during Hong Kong's summers), our approximately 11 kilometer trek -- that did have uphill along with downhill and level sections -- felt more comfortable than challenging!

Other elements that made today's hike really pleasant and enjoyable included the sighting of beautiful blue skies (particularly when we were on the southern side of Hong Kong Island), being in calming green settings part of the time and getting photogenic views at other times, and -- of course! -- our making a number of critter spottings!
The first critter spotting actually came before we had even began our hike proper.  Having stopped at a spot minutes away from the bus stop up on The Peak (so I could do such as apply sunblock), we happened to notice that a beautiful blue-tailed skink was moving about just a meter or so away from us.  For some reason, it then decided to stop for a bit -- the way that I've seen other skinks do at the Tai Po Kau Special Area; with the result being my being able to get my best blue-tailed skink picture to date!  (I've seen blue-tailed skinks a few times previously -- and even got a photograph of one before -- but never so clearly!)

With regards to Golden Orb Weaver spiders: you'd think that I'd have become blase to them after seeing so many of them, including on a Lamma hike a while back.  But the plain truth is that I really do love seeing them and they remain among my favorite bugs to photograph -- in part because they are so large and often stay pretty still even when a camera gets thrust pretty close to them!
And for those who shudder upon seeing them (even in photos rather than in the flesh): I really do hope that my photographs will help you to see how beautiful they are -- even while I do fully realize that it is a pretty much impossible task to try to convince you that there are people (like moi) who truly do think that these spiders also have really cute faces! ;b
Posted by YTSL at 8:14 PM

The skink looks very impressive! Have you touched it???!!!

No, I haven't touched it. For one thing, it's a wild creature, after all! For another, it's difficult enough catching sight and taking photos of it!! ;D

Hahaha! The funny thing is... I don't find the skink and spider scary!

BTW, one of the Photo Hunts I play's themes for tomorrow is... spooky. ;b