Finally -- a visit to Meiji Jingu (aka Meiji Shrine) 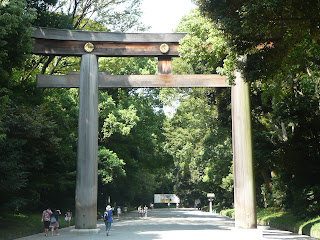 The O-torii at the Meiji Shrine that, at 12 meters high,
is Japan's tallest and largest torii 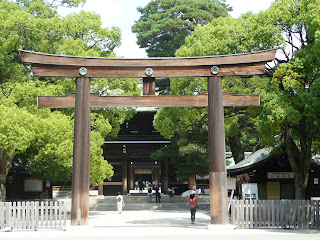 To get to the shrine' honden (main hall) and the open area in front
of it, one has to pass through the Kita-mon (north gate) 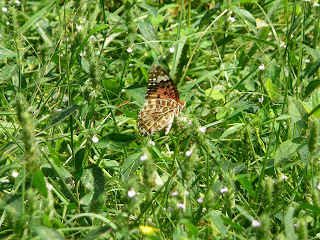 A butterfly spotted in the iris garden section of Meiji Jingu Gyoen
-- only the irises weren't in bloom when I visited! 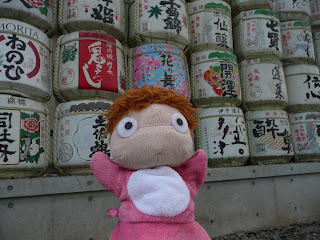 Some 20 blog entries ago, I started blogging about my most recent trip to the country that has become my favorite to visit.  This blog entry on one of Tokyo's most famous Shinto shrines is the final one of this recent series of Japan-centric blog posts.

Up until this most recent Japan vacation, I had not visited Meiji Jingu (aka Meiji Shrine).  It wasn't that I was purposely avoiding it -- the way that I do Yasukuni.  But it just tended to be the case that there were so many other places that I wanted to check out more.

But after a friend visiting Japan for the first time ever returned and raved about her Meiji Shrine experience, I figured that I should head to this Shinto shrine dedicated to the deified spirits of the Emperor Meiji and Empress Shotoken -- and I finally did so on the morning of the final day of my recent Japan trip.

Located in a large space on the western part of central Tokyo, the Meiji Shrine includes an area planned to be an "eternal forest that recreates itself" and presently contains some 170,000 trees.  Soon after entering the shrine area from near Harajuku train station, one finds oneself in a serene wooded space that can seem like its far away from the city center (but actually is within the Japanese capital city!).

Walking along a wide graveled path, the sounds that predominate seem to be that of the crunching caused by feet coming into contact gravel along with some bird songs rather than human voices.  And should one make a detour on the way to the main shrine buildings into a garden that is famous for its irises (though, alas, they were not blooming when I visited) and a well that is believed by some to be a "power spot" where they can experience "positive energy", one is likely to encounter far more silence than one might expect to be possible at a popular attraction like Meiji Shrine.

When in the vicinity of the main shrine buildings (whose area one doesn't have to pay to enter -- unlike the gardens), more people are to be seen and heard.  Even so, there is a general air of quiet and dignity about the place as a whole -- that does add to the overall visiting experience.

For all this, the irrepressible Puppet Ponyo could not resist temporarily getting out of my backpack to look about -- and strike a pose at least once at the Meiji Shrine.  And fortunately, like at such other places as in the vicinity of the Daibatsu at Kamakura or inside of Hokokuji's bamboo grove (also in Kamakura), no one seemed to mind her doing so! :)
Posted by YTSL at 11:59 PM

um.....hehe..Puppet Ponyo with a large glass of saki and now in front of barrels of sake.....hehe a girl after my own heart.

I often wonder when I see barrels of sake at shrines if it's now holy sake you know like holy water.....

It sounds and looks like a wonderful place to visit. So glad that you and Puppet Ponyo managed to get there!

Actually, there's no sake in the barrels!

So you and Puppet Ponyo can only pose in front of those barrels, not drink their contents! ;b

I'm definitely glad that I did finally go and visit Meiji Jingu. And BTW, it's actually really close to Kiddy Land... ;D