Back to hiking the South Lantau Country Trail once more 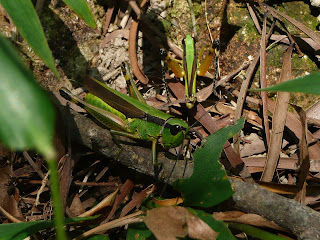 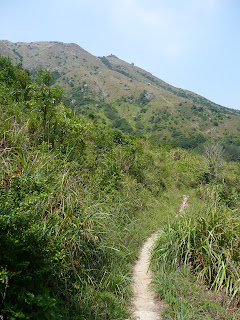 The kind of view and scenery to be had
along this hike that can get one thinking
"I can't quite believe I'm in Hong Kong" :) 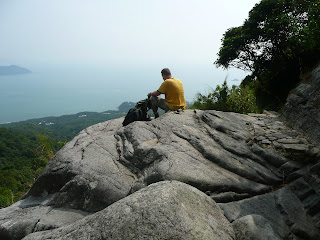 Since my last post about being out and about in Hong Kong, I've been on a few more hikes in the Big Lychee.  One of them took place on a day so hot and cloudless, and on a trail that was so demanding, that my hiking buddy ended up suffering quite a bit from heat exhaustion (and so much so that I was afraid that he had been afflicted with the even more serious condition that is heat stroke).
Just about a month after that (i.e., earlier today), we went hiking again -- and although it was largely sunny too this time around, the temperature was at least five degrees cooler and the humidity levels significantly lower.  All this contributed to this afternoon's excursion being a lot more pleasant and enjoyable -- and so much so that after reaching at the hike's planned end, we elected to extend our outing by continuing along an adjoining trail for a couple more kilometers!
The "bonus" part of the hike consisted of a largely downhill trek along the Old Village Footpath from Nam Shan to Mui Wo via Luk Tei Tong  The main part of the hike was along the approximately seven kilometer length portion of the South Lantau Country Trail that lies to the east of Pak Kung Au.
I've actually been on this portion of this Lantau Island trail that's still largely unpaved and apparently unknown to many people (since for such a nice trail, it really doesn't seem to attract too many hikers) twice before. The first time was at the tail end of 2007 -- i.e., close to five years ago now. The second time was around a couple of years later (See here and here for photo-essays of that hike).

Looking at my records got me realizing that this third hike along this trail was undertaken a few months earlier in the year than the two previous ones.  This might explain the larger amount of critters that my hiking buddy and I spotted while out in the wilds of Hong Kong this afternoon -- starting with grasshoppers galore early into the hike and including not only a nice variety of butterflies but also my third snake spotting over the course of three consecutive hikes!
All in all, it's quite amazing how many critters we spotted today -- not least because a good amount of the time, we had to look down and focus our sights on the trail on which we were walking, since it was on the uneven side and was open on one side that would have involved quite the fall if we had slipped or tripped and went over the edge.  In addition, at other times, our eyes could not help but look further into the distance to drink in scenic views -- and yes, our modus operandi was indeed to stop to take time to enjoy them rather than just walk quickly by or, perish the thought, outright ignore their beauty! ;b
Posted by YTSL at 11:58 PM