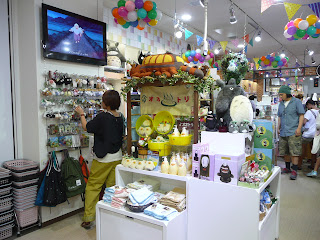 Part of the Studio Ghibli section of the
Harajuku (i.e., main) branch of Kiddy Land! 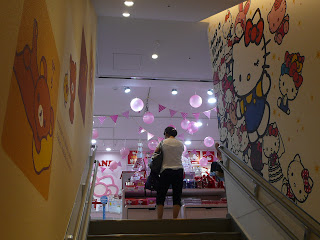 Should there be any doubt: Rilakkuma and Hello Kitty
also have a presence at Kiddy Land! :)

A friend asked me recently which places in or around Tokyo I make a point to visit each time that I visit the Japanese capital city.  One answer I gave -- which, actually, she already knew about -- was the market at Tsukiji. (Though, strictly speaking, I only started going to Tsukiji in 2006 -- not having been there on my previous visits to Tokyo in the 1980s and 1990s.)


Another place in Tokyo that I've been to as frequently as I have Tsukiji is the Kiddy Land in Harajuku.  Sometimes described as the Hamleys of Japan, it's a toy store for both children and adults -- and particularly those who are fans of such as Hello Kitty, Rilakkuma and their Japanese ilk (though it also does have  substantial dedicated Disney character and Barbie sections).


The first time I visited Kiddy Land (in 2006), part of me thought I had died and gone to heaven.  On that occasion, I was particularly enamored -- and awed -- by its Studio Ghibli section.  (Granted that that was because I had not yet visited such as the Ghibli Museum's Mamma Auto! gift shop and other dedicated Studio Ghibli stores like the Dongary Garden in Tokyo Station's Character Street!  Even so, I have abiding memories of having come across a Totoro reclining chair-bed there that was the closest thing I've ever seen to my dream Totoro bed (only my dream bed would be at least Queen-sized...)!)


When I visited Tokyo last year, I was disappointed to discover that its Ometesando building was closed for renovation and although there was a temporary Kiddy Land in nearby Cat Street, the fact of the matter was that it just was not as big and consequently cool.  Of course, I still spent a considerable amount of time checking out this temple to kawaii's offerings though -- and did leave with several gifts for myself along with friends (among them those who adore Jiji, Rilakkuma and Pompompurin (referred to by the friend in question as "Pudding Puppy")).

Still, I definitely was happy to discover on my most recent Japan vacation that Kiddy Land was back in its larger, multi-storey Ometesando building.  And although I had previously resisted the urge, this time around, I yielded to the temptation to take photos inside this mecca for character-themed plushies and other products. (Actually, I'm not sure if it's really not allowed -- but in any event, no one came up to ask me to not do so!) :b
Posted by YTSL at 11:31 PM

I'm glad to see Kiddy Land is open again. M and I have spent afternoons there buying gifts for very young(under 5 yrs) friends and ourselves.

After showing G the Totoro couch he commented....."Wait a couple of years and buy a used one on EBAY." Some just don't get it.

Thanks for this useful info. haha.... Kiddy Land here I come!

Re Kiddy Land: I've been to other branches of Kiddy Land (including in Kokura and Fukuoka) but the big Harajuku store really can't be beat!

Re the Totoro couch: If I lived in Japan, I would definitely get it... but since I don't, I just stroked it a bit before sadly saying goodbye to it... ;S

I hope you have a great time gawking and shopping when you finally do get to Kiddy Land. :)

Everyone loves toys! Wish u'd shared more pics of them u took inside ;)

Haha, I didn't take that many photos inside! Maybe you should go visit and take many photos to share! :)