At 532 meters high, Mount Parker is Hong Kong Island's second highest peak -- and is topped on the island only by 552 meter high Victoria Peak. But because there's a paved road that leads all the way up to the wireless signal station (which I had previously mistaken for an observatory) on its summit from the around sea-level King's Road, it's a hill/mountain that few serious hikers think of ascending.

As far as my regular hiking companion and I were concerned though, the top of Mount Parker's a good place to aim to get up to on a Sunday of a week where quite a bit of rain had poured down. So that was where we proceeded to go on one of our hikes where the main aims was to enjoy some nice scenery and look out for interesting critters as well as spend some time exercising out of doors... ;b 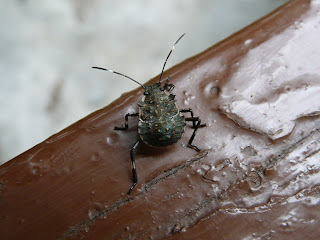 Minutes after we entered into Tai Tam Country Park (Quarry Bay
Extension), we spotted this bug resting on a park bench :) 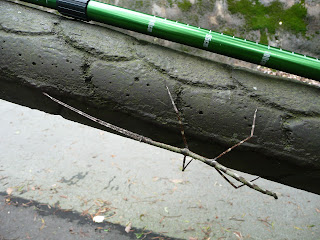 Further up Mount Parker Road, we spotted this large
stick insect that didn't seem to realize the railing
it was on is only made to look like wood! :D 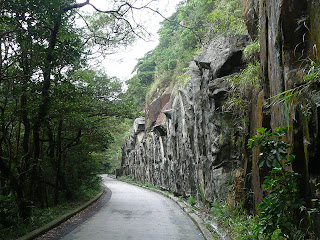 It was a cloudy day and actually quite windy too -- and despite
it still being summer, yielded photos that looked autumnal 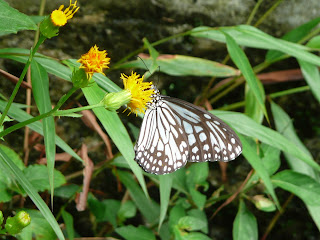 How I love spotting (and photographing) a stationary butterfly! 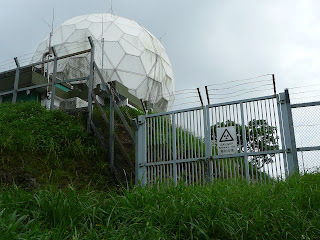 Seeing the "Radiation Risk" sign, we didn't stay for long in the area
-- but still stayed long enough to snap a few photos! ;b 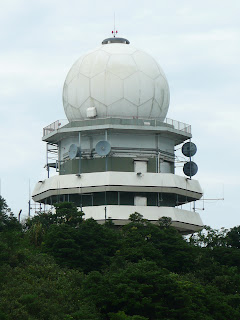 This wireless signal station that I've seen so often from much
further away looks, when viewed from this close, like it
shares the same architect as some Malaysian mosques ;D 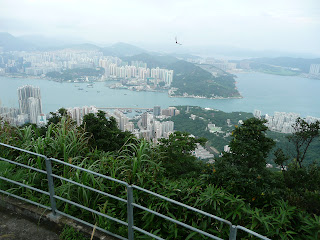 A view of the eastern sections of Hong Kong Island,
the Kowloon Peninsula and Victoria Harbour --
complete with a flying bird of prey (a black kite perhaps?) 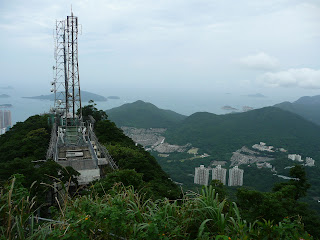 What I do know is that at least one bird of prey has its nest
on that high tower on the edge of Mount Parker's peak :)

More adventurous types might like to try the path from Tai Tam Gap (off Tai Tam Road) up to the "second" peak of Mount Parker - about 400 metres west of the one with the radio gubbins on top. One of the prettiest walks on Hong Kong Island, especially in the fog, which we get plenty of between now and the summer.

Will be getting a blog post from you at some point re that hike? :)

BTW, another hike in the area that I like -- that might appeal to more adventurous types -- is that which goes to the top of Boa Vista. :)

It's pretty straightforward really for anyone with a map. :) I was intending to post about a walk in the north-eastern NT but life got in the way. And I still owe my faithful and in some cases impatient readers the Ulacas.

Beautiful views from the top! And those bugs...!!! I've not been this close to any of those bugssss!!

Thanks for liking it. Did you like the bonus of having actual measurements to gauge the length of that "stick"? ;b

Ya, ya -- but see, what I'd like are photos of the trail to get some idea re whether it's overgrown, etc. Oh, an BTW, I've checked out that fire lookout in Tai Lam Country Park that you mentioned in a long ago blog entry. Good stuff!

Also, thanks much for the Ulacas mention. :)

I frequently see many bugs close to me (when hiking). The problem though is that quite a few of them don't stay still enough for me to photograph!!! ;(