Camouflaged creatures - with a focus on a particular butterfly 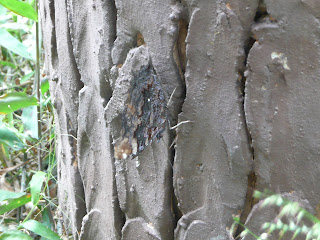 See the butterfly in the photo? 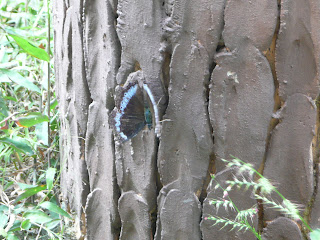 The same butterfly's definitely more visible
when it opens its wings! :b 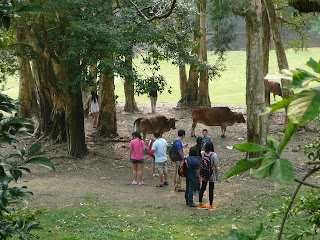 Far easier to spot were large mammals
such as cows and my fellow humans... ;D

Earlier today, I went on a hike with two friends in Shing Mun Country Park -- one of a trio of Hong Kong country parks (along with Kam Shan and Lion Rock Country Parks) that's infamous for having turned in recent years into a veritable monkey land. While there actually are some people who look forward to catching sight of these Rhesus Macaques that are believed to have been introduced to the area in the early part of the 20th century, I am not among them -- not least because some of these primates can be on the aggressive side.
So I was very glad that that they were not the only creatures that my friends and I spotted over the course of our hike.  (Also, that this was the first hike in weeks where I didn't see one of Hong Kong's many snakes!)   More specifically, we also came across a fair share of butterflies, moths, dragonflies and cows along our approximately 10 kilometer hike that took us from Shing Mun Reservoir to a village on the outskirts of Tai Po town via Lead Mine Pass.
The most exciting spot of the day for me was a medium-sized spider that initially scurried about quickly, then stopped and stayed still in the hope that its camouflaged appearance would result in my not being able to notice it.  Unfortunately, although I did notice it alright, my camera refused to focus on, and consequently take a non-blurry shot of, it.
So I'm having to content myself instead by putting up photos at the top of this entry of my second spot of a camouflaged critter earlier today.  Even in this case, the pictures aren't as sharp as I would like but I think they're clear enough to show how amazingly different the butterfly in question's inner and outer wing surfaces look from each other, right? :b
Posted by YTSL at 8:43 PM

I had to enlarge the first photo to see the butterfly. I thought it was there but wasn't sure.

Are those cows just roaming around? It seems weird to me living in a big dairy cow state to see the people and cows together.

The butterfly's hard to see when it's got its wings closed, huh?

Re the cows: they're feral cows -- yes, really!