A few months after I moved to Hong Kong, I found and bought a copy of Alicia M. Kershaw and Ginger Thrash's Above the City: Hiking Hong Kong Island (HKU Press, 2005).  For a time, I followed this super helpful book's outlined hiking routes religiously -- and worried that I'd never be fit enough to complete those hikes that the book's authors rated as a 5 out of 5 in difficulty.

It's with a sense of achievement that I know that I reached a point some time back where I now feel confident enough to do such as "mix and match" the book's hiking plans and/or look upon them as "just" suggested routes.  Thus it was that one hot summer's day, my hiking companion and I elected to include an ascent up and descent down 494 meter high High West (route 1E in the book) to a hike that also included a Peak Circuit walk (route 1C) and a trek from Victoria Peak down to Aberdeen (route 1K)!

Come to think of it, it was on the challenging side to have attempted so much in a single generally breeze-less afternoon whose temperature was consistently over 30 degrees Celsius.  But when looking back at the photos I took over the course of that hike, I have no regrets at doing what we did on that hot but beautiful day... ;b 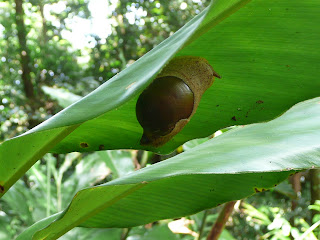 Yes, I honestly thought this snail to be picture worthy! :) 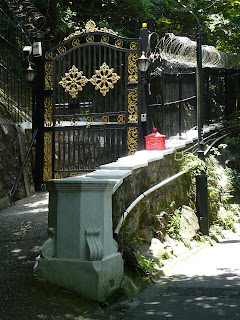 ...as snap worthy, in fact, as this decorated gate
of one of the super expensive residences on The Peak 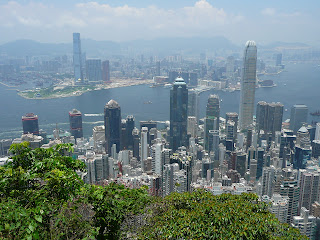 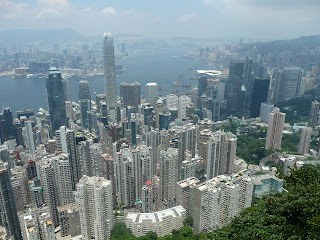 ...and even a resident like myself can be left in awe
by this impressive view of "Asia's World City" 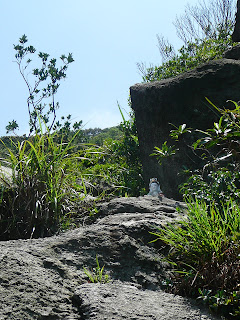 Alternatively, I can tear my eyes away from those views
to look for often overlooked sights in the area like this ;) 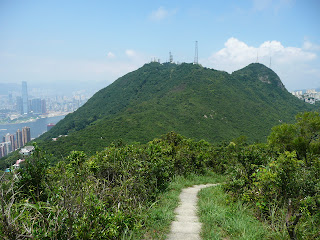 Thanks to the Above the City book, I also knew to get on
the trail from High West Park that led up to High West itself 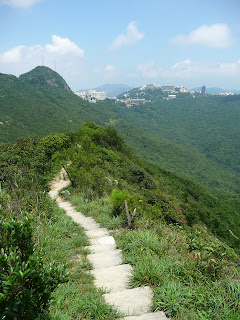 The trail is many stepped but also
replete with grand views 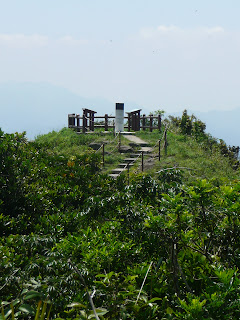 And at the summit of High West is --
yay, yay -- a trigonometrical station! :b

Who lives up there behind those ornate gates on The Peak?

I'm figuring people with loads of money (or loads of debt)! You've got specific information on the occupants? ;b

From the country views of dirt trails to the grand 'Asia's World City' view, all in one place. That's amazing eh?

Is that Kwan Yin peeking out at hikers in the 5th photo down? Also I like seeing photos of steps on the trails. Do you find them helpful or does it depend on the steepness of the terrain?

Are your photo essays on you last trip to Japan really finished? And Puppet Ponyo doing these days?

It is amazing... and I really do love both the urban and country sides of Hong Kong. :)

Yep, it looks like a Kwan Yin (figurine) to me too! Re steps: I actually do like them... particularly when going down!

Re Japan: I still have lots of photos but ya, I think I need to get back to putting up hiking photo essays as I'm so far behind with those.

Re Puppet Ponyo: she's spending quality time with her sisters, Stress Ponyo and Muse Ponyo -- who have been going out a bit more than her in recent weeks! Still, don't cry for her -- she went to Macau last month! ;b