From High West down to Aberdeen (Photo-essay)

In the eyes of many people (including those at Time Asia who voted it the Best Urban Hike in their 2004 Best of Asia issue), the Dragon's Back is the Hong Kong Island hike to go on  While I've happily hiked the Dragon's Back not just once but thrice now (each time in the company of different friends), there are many Hong Kong Island hikes that rival that popular one over on the eastern side of the island in terms of sheer enjoyment, never mind challenge.

And as unlikely as it sounds, it really is the case that one of those other hikes begins at Victoria Peak -- though it's also true that it detours up to High West before going down that 494 meter high peak from whose summit some really great views can be had to the very Scottish-sounding town of Aberdeen -- known in Cantonese as Hong Kong Tsai (i.e., Little Hong Kong) -- over on the south side of Hong Kong Island... :b 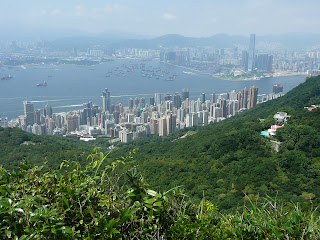 The north side view from atop High West includes concrete jungle,
the blue waters of Victoria Harbour and natural greenery 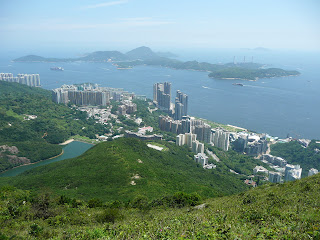 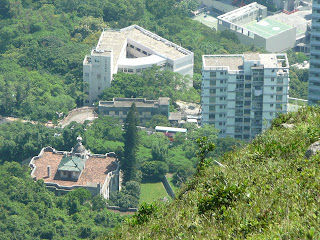 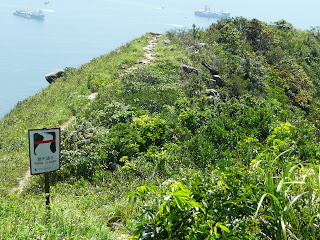 Rather than ignore the "Road Closed" sign,
my hiking companionand I elected to safely
go back down the trail we had gone up on 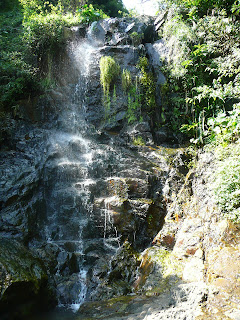 After getting back on the Hong Kong Trail,
we passed by this lovely waterfall 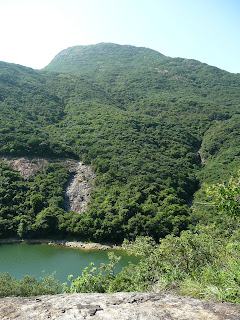 The kind of scene that can look like it's miles
away from civilization -- but actually isn't so! 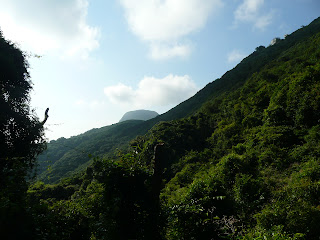 Some measure of the distance we covered on this hike can be
gathered from learning that the peak in the far distance in this photo
is that of the same High West that we had been on earlier ;b 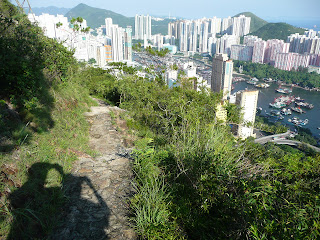 High west, is that the 'alternative peak' you were talking about, with lots of butterflies? Still need to go and check it out...

Yes, indeedy re High West being the peak I told you about that's next to Victoria Peak and has what I think of as a "butterfly alley". :)

We did High West once. Loved it.

Thanks for the picts - they bring back so many memories, as I grew up on Mt Kellett in the 60s. Spent my childhood exploring some of those slopes. Unfortunately I haven't been back in years. Keep up the blogging! David F.

High West on a good day is truly lovely. On my most recent hike up there though, it was really misty... and was a bit freaky being up there then!

Thanks for your comments. I'm glad my pictures brought back good memories for you. :)

Hi! Thanks for stopping by. I've been thinking of you and your comments reminded me stop by to check out your excellent HK pictures. My job changed recently and I am now working with a group located in Hong Kong. I work remotely with them - they are in HK and I'm in Seattle. Your blog gives me an idea of life in HK and maybe even something to talk to my co-workers about!

You're welcome -- and if you're wondering, am enjoying your Hawaii entries. :)

And woah re the Hong Kong connection. It'd be interesting to see if your co-workers and my ideas of life in Hong Kong tally up. :)