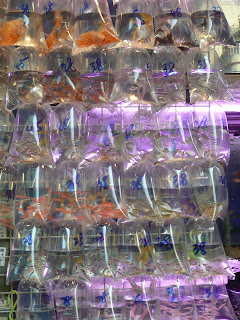 See what are in those rows of plastic bags? 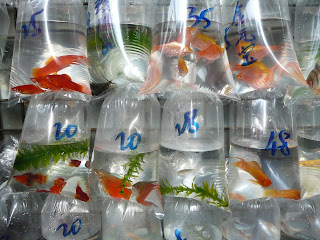 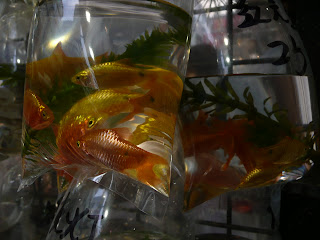 Yup, they're ornamental fish (in ready to carry
plastic bags) for sale on Goldfish Street/Market! :)

While on the plane on the way back from Japan more than a month ago now, I got to talking to the friendly fellow sitting next to me.  An ethnic Indian man who now is a resident of Orange County, California, he told me that he used to live in Hong Kong (and that his brother still lives in the Big Lychee).  Just due to be in transit in the territory (he was headed to Mainland China for business), he shared some of his happier memories of Hong Kong -- some of which involved his strolling around the section of Mongkok known as Goldfish Street or Market.

As it so happens, I had been in that area recently -- more specifically, I had gone to Fa Yuen Street Market to get a new pair of cargo pants; then with time to spare, decided to stroll around an area I had loved to visit when I came to Hong Kong before I moved here but don't spend that much time in these days.

Being someone who prefers to visit large aquariums (like those in Osaka and Okinawa) rather than own a small one, I'm not going to be a customer of the many ornamental fish stores on Goldfish Street or Market.  Fortunately for me though, their having so much on display outside as well as inside their stores makes it so that there's much for me to see even without stepping into the stores and having to deal with their staff.

Put another way, I was happy and able to play camera-clicking tourist for an hour or so that day.  At the same time, I also found myself -- as (still) can be the case when I'm wondering about the sections of the Big Lychee that have recognizably featured in Hong Kong films -- feeling like I was playing a part in a Hong Kong movie!

Although I haven't viewed Derek Yee's sublime C'est La Vie, Mon Cheri in years, I'm pretty sure that there's a scene in which Anita Yuen's character takes Lau Ching Wan's character to Goldfish Street/Market (as part of an introductory tour of valued sections of her neighborhood).  More recently, Aarif Lee and Evelyn Choi could be seen frequenting this part of Mongkok in Alex Law's Berlin Crystal Bear-winning Echoes of the Rainbow.

Returning to real life: A 2010 CNN Go piece talked about Goldfish Street/Market facing the prospect of being shut down by the government and reported shop owners bemoaning efforts to make it (more of a) tourist attraction.  Touch wood, but Goldfish Street/Market continued to look pretty lively on my most recent visit -- and while I didn't buy any fish, here's taking the opportunity to show people what's on sale there -- and maybe someone (or ones) might be influenced by this post to not only visit there but also spend some money there and thereby make the shop owners happy! :)
Posted by YTSL at 11:13 PM

I love this part of Hong Kong. So lively, so bright, and definitely nothing you'll see here in the US. My first trip there I was amazed but didn't take any pictures for some reason and regretted it. Luckily I remedied that on another trip. But even so, even the most professional pictures don't really capture it I think. I am putting this on my list of things to go back to on my next trip (June 2013).

What of the Bird Market? Is it completely gone?

Yeah, I think even the best photos can't really do the Goldfish Street/Market justice -- the same as with Victoria Harbour (particularly the view from Tsim Sha Tsui of Wan Chai-Central-Sheung Wan). But at least the photos are good for memories, right?

Re the Bird Market: it's still there... even if it does periodically get shut whenever there's a bird flu scare!

I love to look at the stores along goldfish street even though the animal lover within me suffers :-S

I know what you mean... my initial reaction was: is there enough water and air in those plastic bags for the fish inside them? Well, I content myself by noting that I didn't see a single dead fish there... ;S