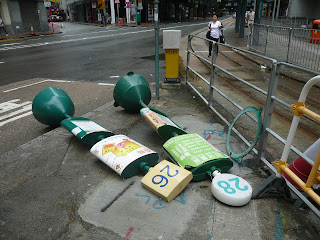 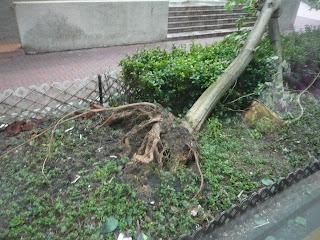 When I wrote the blog entry before this one, typhoon standby signal number 1 was in place. And so it is again this evening as I write this latest entry to my blog.  But in between, first strong wind signal number 3 and typhoon signal number 8  were raised -- and, then, late last night, increasing gale signal number 9 and hurricane signal 10 as well.

To quote the Hong Kong Observatory, "It is not very often that one sees the issuing of the ultimate tropical cyclone warning signal of No.10." Up until last night, the last time that that signal had been issued was in 1999 when Typhoon York blew into town.

This time around, Typhoon Vicente came to visit. On Monday morning, most of us went to work with little inkling that the typhoon warning signals would increase past 3.  But by mid afternoon, people starting getting the sense that maybe this was no ordinary summer rainstorm.

Still, my company didn't provide emergency shuttle buses to get its employees nearer home until just a half hour before the usual end of our work day. And many of us were still on our respective buses when the warning signal went up to number 8 -- and we saw ample evidence outside our bus windows of strong winds as well as lots of rain lashing much of Hong Kong.

Fortunately, the vast majority of us were safely in our homes in the wee hours of the night when the typhoon was at its strongest. And I was close to being asleep when a friend texted at around 1 am to tell me that the signal had been raised to the maximum number of 10.

The next morning, before my clock alarm went off, another friend-colleague texted to ask about company shuttle bus arrangements for going to work if typhoon signal number 8 or higher was in effect.  But what with Typhoon Vicente seeming aiming not to inconvenience businesses and such, the typhoon was downgraded to level 3 by around the start of the work day.

At the same time, Typhoon Vicente sure did create a lot of work for those charged with keeping Hong Kong clean and orderly looking -- what with storm damage visible over broad swathes of the territory even as late as this evening. And after two recent years of relative quiet typhoon seasons (in contrast to those of such as 2008 and 2009), we have been served notice once again of the power of typhoons in particular, and nature in general.
Posted by YTSL at 11:07 PM

You've got to love Hong Kong. Major typhoon yet the electricity never went out, and by noon in my neighborhood the sidewalks were all swept, the fallen tree limbs stacked in tidy piles, and it was business as usual.

glad you're all safe!

Agree with HKP, a lesser storm here and there'd be power outages around the city.

Your company sounds like it wasn't as concerned about your safety as it should have been, that is a shame. Luckily you were home safe during the worst of it.

The newspapers today had front page news about problems encountered as a result of Typhoon Vicente. But I agree with you -- it's all relative and it seems that there was a lot less inconveniences and more business as usual than would be the case in many other parts of the world.

Bet you're not missing Hong Kong typhoon season! ;b

I was telling a Hong Konger friend today about the power outages, etc. suffered as a result of winter storms in the US. And yeah, Hong Kong really does come out looking good compared to a lot of places -- though less so my company... ;S

The minibus stops can be put right, but the trees can't :-(

Very impressive how Hong Kong handles a major typhoon. I was glad to hear you were safe and sound.

Glad that you are safe and sound. Gosh! typhoon signal number 8, even 10! I watched the news and there were some pretty bad damages.

Wow...I think I was in HK for a number 8. I have a strange feeling that Hawaii is due for a hurricane this year.

Glad you are safe.

Yeah... the trees really do appear to be the major victims of Typhoon Vicente... :S

Yeah, I think sometimes Hong Kongers don't realize how much better Hong Kong is able to handle a major typhoon/natural event than so many other parts of the world.

I've been here when the typhoon signal number 8 has been raised up a few times now -- but the number 10 really was very unusual. The first time since 1999 in fact!

The weather does appear to be doing unusual things in different parts of the world this year. Hope should Hawaii have a hurricane that it can weather (no pun intended) it as well as Hong Kong.