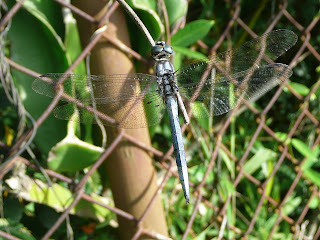 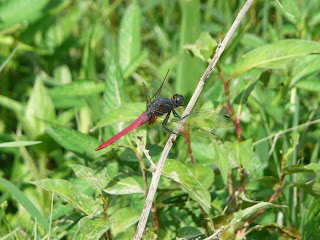 But earlier today, I also spotted a few other species
of dragonfly including this red and black beauty 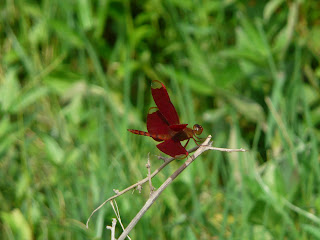 And although I had my doubts, internet research
yields the info that this bug also is a dragonfly --
one specifically known as a Russet Percher! :)

Today looks to have been Hong Kong's hottest day thus far this year -- with temperatures in Sheung Shui going all the way up to 35.4 degrees Celsius (and up to 34.4 and 34.3 degrees Celsius in Sai Kung and Wong Tai Sin respectively) according to the Weather Underground of Hong Kong website.  But lured by such as beautiful blue skies and visibility that extended for many kilometers (so unlike the day that I snapped my first dragonfly photo in Hong Kong), my hiking friend and I opted to go on a hike that took us up to a fire lookout perched atop a 300 meter hill in Plover Cove Country Park and all the way from Wu Kau Tang to Luk Keng via Kuk Po.

Our afternoon's excursion lasted 3 1/2 hours and got us sweating buckets and, in my case, drinking all of the 1.5 liters of water I brought with me and quite a bit more.  (About two thirds along the hike, we came across a place serving food and drinks -- and the cold can of Pocari Sweat I got there tasted like the most heavenly nectar!  In addition, near where we ended the hike, I had double the amount to drink than what I usually have with my early dinner!!)

But my friend and I agreed that all the effort and sweat shed was worth it because today's hike really was a a pretty good one -- including in terms of scenic vista viewing and -- yep, you guessed it -- bug spotting!  Among the insects we spotted -- but I unfortunately was unable to take photos of -- were black butterflies that were the size of small birds, a truly exquisite green butterfly, and a purple and brown butterfly that was pretty eye-catching too (since they preferred to just flutter by us rather than stop and land some place for even a few seconds).

Happily however, I also succeeded in taking a few photos of insects -- including the trio at the top of this blog entry.  Although I was able to get closest to the blue dragonfly, I do derive greater satisfaction from having taken photos of the two other dragonflies -- which, as it so happens, I spotted perched on the very same thin branch (or is it so thin it's actually but a twig?) but were not doing what I saw another pair of dragonflies doing last summer!

With regards to the Russet Percher: The way it flew made me think it was a dragonfly but when I looked at my photos of it, I began wondering if it wasn't some other type of insect.  After ascertaining what it is by way of a Google search though, I have to say that it really helps shows the wide range of Hong Kong's 117 dragonfly species -- an amazing more than 10 of which were new to science when they were first discovered and recorded here in this part of the world that many people still do not realize has any countryside, never mind a pretty diverse wildlife! :)
Posted by YTSL at 9:54 PM